How is it possible that November is just around the corner and I'm still blogging about things happening in August?!  Well, let's just say it's been crazy around here.  We've been busy these past few months and I haven't had the mental energy to try to put everything into words.  I've taken an oath to get caught up by Thanksgiving, so here's hoping to a lot of blog posts in the near future!

Back in August, we met up with our college friends who live in Northern Ohio.  We met them in Hocking Hills for a weekend getaway.  We rented a cabin, did some hiking, ate tons of food, played board games, and just enjoyed each others company! 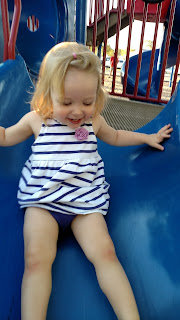 (We were a little ahead of schedule and was able to have a picnic dinner and play at a playground en route to the cabin.  We got some food from famous German food truck and it was delicious!) 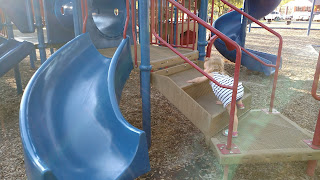 (I couldn't accurately grasp the amazingness of this playset in a picture.  Bean loves slides and playgrounds, and this one was geared for toddlers specifically.  There was a whole section that she could run around in and no chance of falling. Plus, each slide was small and low so I could just walk around and catch her as she went down.  It was fabulous! Back home, I have to crawl up on the set with her and chase her around.) 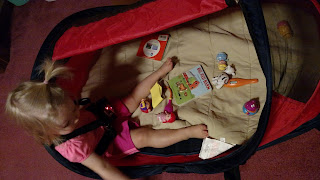 (Around the time we stopped for dinner, I made the realization that I forgot our pack'n'play.  Our friends happened to have an extra sleeping pod.  I tried to have Bean sleep inn it, but she just put all her toys in it and thought it funner to play than sleep.  We ended up moving the bed up against the wall and she slept by the wall.  It took awhile to get her to fall asleep at night which was frustrating, but we survived.) 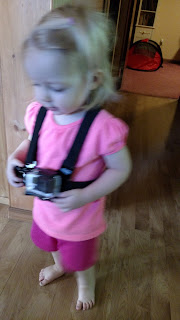 (Steve got a GoPro right before the trip and tried to have Bean take some footage for us.  She thought it was funny to wear, but ended up just running and sitting in the little sleeping pod with the camera on -- you can see the camera on her in the above picture, too.) 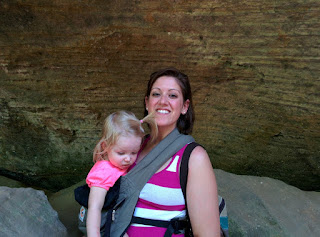 (We went hiking on some of the trails.  Let me just say, hiking with a toddler is nerve racking!  Bean is at that age where she wants to to everything herself.  I brought the carrier in hopes of her being okay to just hang out, but nope.  She wanted to climb everything herself, and pic up all the leaves/sticks.  She did really good, though.) 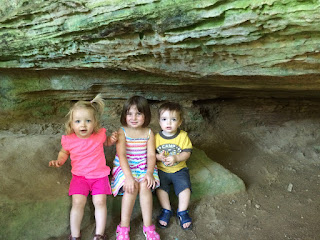 (The kids inside Old Man's Cave) 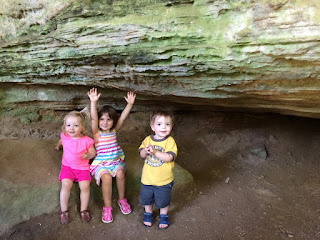 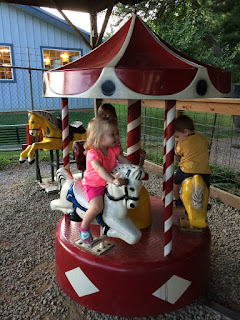 (We went to dinner at a buffet place that had a petting zoo, putt putt, and other various activities on the grounds.  Bean actually wanted to get on this toy, even though she freaks out on all merry-go-rounds and horse rides.  So we put the kids on and put in a quarter.  They all loved it.  She kept asking "again!".  We had to dig for more quarters, but let the kids ride it a few times.) 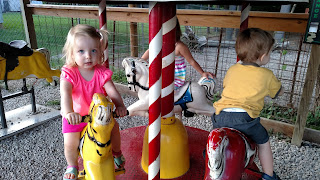 (Despite the face being made in this picture, she really did love the ride! I'm guessing she was more confident on it because it was more her size??) 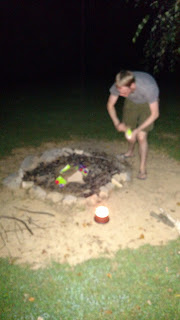 (That night, we had a small fire - and I do mean small.  Haha.  We brought stuff for s'mores, but we were all too full from dinner.  So we just sat around and enjoyed the fire.) 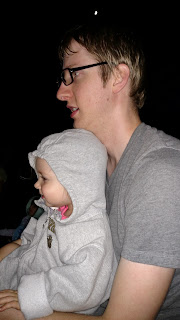 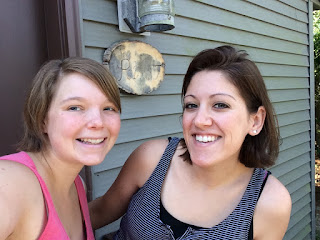 (Our weekend went wayyyy to fast.  It didn't help that we didn't get to the cabin til later on Friday and had to be out Sunday morning. Best part of the weekend was when Alice walked in with her giant baby belly.  We had no idea she was pregnant, let alone nearly 5 months along!) 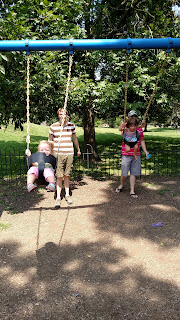 (We weren't ready to say goodbye when it was time to leave.  So we decided to head to Columbus and let the kids play at a playground.  It was super hot and we were all pretty tired.  Luckily, the swings were in the shade and we were able to talk a little longer.) 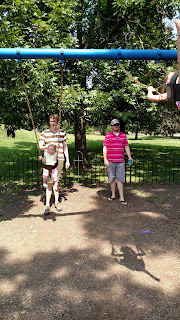 (The kids loved swinging!  The dads liked the shade!)

We are looking forward to our next visit!
Posted by Unknown at 10:01 AM