After 2 months of waiting, frustration, and more waiting, our new furniture has arrived!  Back in February when Steve's parents came to visit, they took us furniture shopping and bought us a new coffee table and end table.  We were finally able to retire our college iKea tables from the living room (which was about time since the iKea coffee table was in need of some more glue).

We were originally given a 2 week delivery date, but a few weeks came and went before we heard form Ashley Home Furniture.  Our Europe trip was quickly approaching, so I contacted the store to let them know we would be gone in case the furniture showed up.  When we got back from Europe, I had no messages on the phone about the furniture and had forgotten all about it.  Luckily, an Ashley commercial came on one day which reminded me that we still were waiting for our furniture!  I called and found out that the furniture was on back order (nice of them to inform us-- ha!).  They gave us a date for delivery in April.

Halfway through the month of April, I went ahead and called again, just to make sure we were still set for an April delivery.  I was informed that we were put on priority and should get the furniture within the week.  Lucky for them, they were true to their word and it showed up a couple days later!  After all that waiting, we had forgotten what the furniture had looked like, so we got to fall in love with the pieces again.  We're still toying with room set-up.  Our living room is an odd shape (rectangular) with our tv as a focal point on a long side.  It's hard to use the space appropriately while still being able to see the tv (without glare and craning your neck).  We're trying another layout now, we'll see how it goes. . . 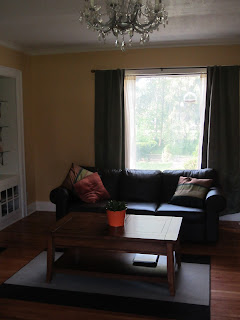 (This is the couch that I tend to lounge on.  I know it doesn't really make sense to have the biggest couch perpendicular to the tv, but it does when you lay on the couch to watch the tv.  I don't know if you can see, but on the big window in the upper right area is our newly purchased bird feeder.  Because of all the squirrels, we had to buy one that suctions onto the window.  We just put it up and are anxiously awaiting for a bird to use it.) 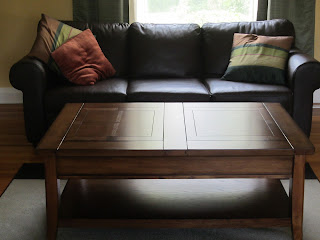 (So here's the conundrum -- our furniture is now placed on 2 sides of the living room, and they feel very far from each other.  If we move them closer, it cuts the living room space up funny.  I need a layout intervention.  Any suggestions??) 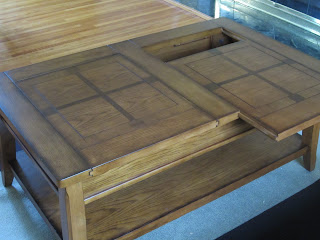 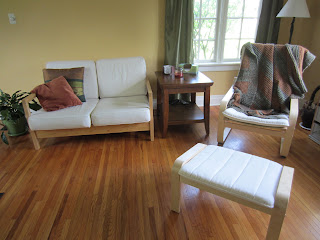 (Here is where Steve usually sits -- in his favorite iKea chair.  During the day, I tend to sit on this couch since it is straight on from the tv.  However, at night, the chandelier puts a bad glare on the tv from this angle, which is why I only sit there during the day.) 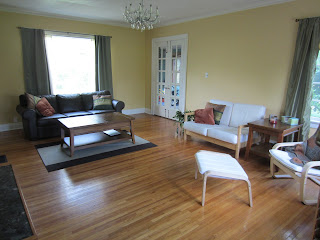 (Here you can really see the awkward layout.  Steve likes to point out that the middle area of the floor is just wasted space.  Eventually, we'll get a big area rug, but it's still an awkward set-up.  Although, Ramses does enjoy having the lay of the land to roam around -- in his ball, of course!) 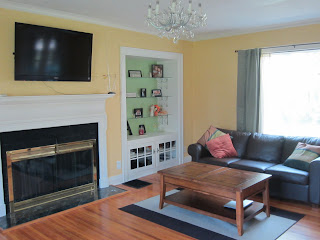 (I don't remember if I ever showed the tv mounted on the wall with it's permanent set-up.  All the wires have been neatly tucked away -- through the wall and into the bottom of the bookcase/built-in.  Since we don't have cable, we watch our tv via rabbit ears.  Right now, we have them sitting on the furthest right of the mantel (pictured), but when people come over, we can tuck them away behind the tv.  When the ears are tucked away, we lose 3 of our 9 channels, so when it's just us, we like access to those 3 channels and don't mind the ears on the fireplace.)
Posted by Unknown at 7:30 PM