I haven't had time to keep up with the blog the past few weeks because we've been soaking up the beautiful warm weather outside.  Who wants to stay inside on their computer when the sun is shining outside?

Our main priority outside has been working on the landscaping.  We have been very fortunate that one of the previous owners had the yard professionally landscaped.  However, more recent owners did not upkeep the landscaping.  If there was once mulch, we don't see any signs of it.

We decided that the best way to battle the weeds threatening to takeover the plants is to lay down weed fabric and mulch over it.  We decided which areas were most important and are doing small sections at a time.  So far we have two main areas in front of the house completed (using 3 rolls of fabric and 24 bags of mulch).  We know it will take us all summer to get all of it done, but we're working on it.

Most people don't put their lawn as a priority (especially the first summer they're in their house).  However, our neighborhood has several old houses with very extravagant lawns.  We feel in order to fit in, we have to have a semi-decent yard.  Since moving in, we've done little things around the yard that have made positive differences. 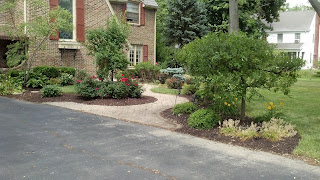 (These are the two areas in front of the house that have been weeded, fabric-ed, and mulched.) 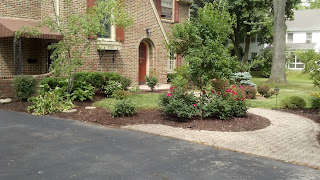 (I should have take the pictures sooner when all the roses had bloomed.  You will just have to look at the previous post about Gabbie to see the roses in bloom.  Also, the bush in the left of the picture is need need of much help.  I have no idea what it is, and it once was full of leaves and beautiful, most have died and there are weird seed pods in the middle.  Any advice on caring for this plant is appreciated!) 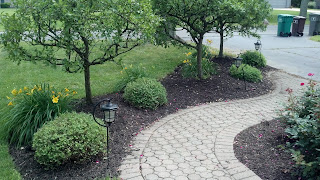 (View of the sidewalk between the landscaped areas.  One of our lights along the path bit the dust.  The rod broke and it no longer stood upright.  Me tripping on it while pruning the trees may have been the culprit. . . ) 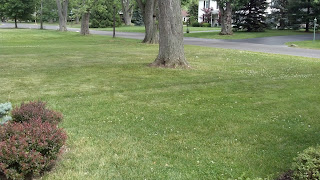 (Here's an updated picture of the yard.  No more dandelions!!  Now we just have to kill the clover and wild violets and it will be perfect.) 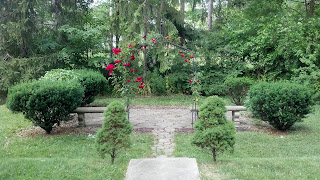 (Here is the patio area in the backyard.  I spent one day cleaning it up, trimming the bushes, and reattaching the roses to the arch.)


For Memorial Day, Steve and I headed went to Colorado to visit his family.  While in Colorado, we got to spend lots of time with his family, visit some friends, and enjoy the beautiful Colorado weather and scenery.  We went on a couple of different hikes -- one nearby his parents' house and the other up in the mountains.  We also got to go to a Colorado Rockies baseball game (which was the first baseball game I have ever been to).  We had awesome seats thanks to Steve's dad!  It just so happened that we were in town the same time as Steve's best friend growing up (whose name is also Steve) was in town, too.  We got to meet up with him and his wife for a delightful breakfast.  It was so good to see them!

Now that we're back home, we're back to our various projects.  Steve is back to work and has to be in Cincinnati a few days this week, leaving me to tend to the house alone.  Yesterday, I tackled fixing our grill.  Our grill is only two years old but looked a little worse for wear.  We got it when we moved to TN (thanks mom!) and we didn't take the best care of it.  We had a little porch off the back of the house that we just stuck it under, even in the winter (which I was told it didn't get cold or snow in TN, so I didn't think about winterizing it).  After being outside constantly for over 1.5 years, the grill had accumulated some rust.

We decided that a grill should be a lifelong investment (especially since we grill out 2-3 times a week in the summer) so we bought a grill cover and are taking much better care of it this year.  So back to yesterday -- I sanded, washed, and dried the grill really well in prepartion to paint it.  I covered up the areas I didn't want painted and I used a high-heat spray paint from Rustoleum.  Our grill is back to looking brand new (okay, maybe more like a year old) and protected under its cover. 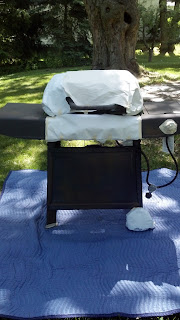 (Here's the grill after I sanded, washed, and covered up the parts not to be painted.  The lighting doesn't show how rusty the grill looked, but don't worry -- I got some closeups.) 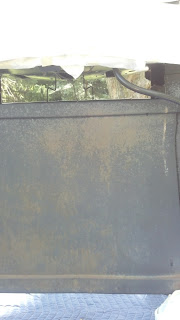 (Here's the rust on the front panel of the grill.) 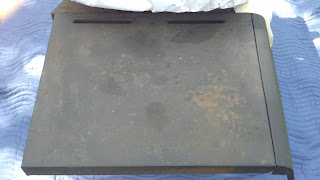 (Here's the gross left side table.) 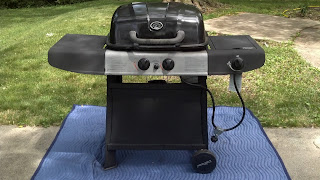 (This is after I've painted and removed all the coverings!  I was truly amazed at the paint.  I was afraid you'd be able to tell it was spray painted, but it covered so well!) 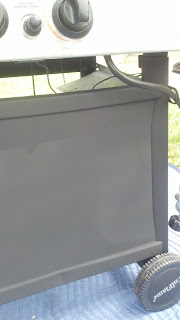 (No more rust on the front panel!  Woohooooooo!) 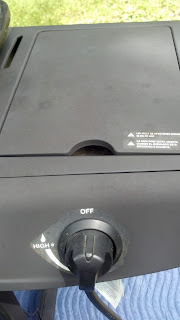 (This is the right side table top.  It was hard to keep the lettering around the nob without it looking bizarre, but it is what it is.  You can see it's original state surrounded by the new paint around the know and on the warning table on the panel top.) 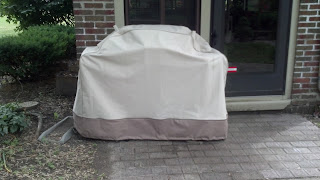 (The grill is now nicely tucked under it's cover.  Hopefully, I won't have to repaint the grill again.  I also had to get a new propane tank for the first time in 2 years.  So we literally have a new grill to use this summer!  I'm already planning grilling out steaks sometime this weekend. Visitors are welcome - ha ha!)