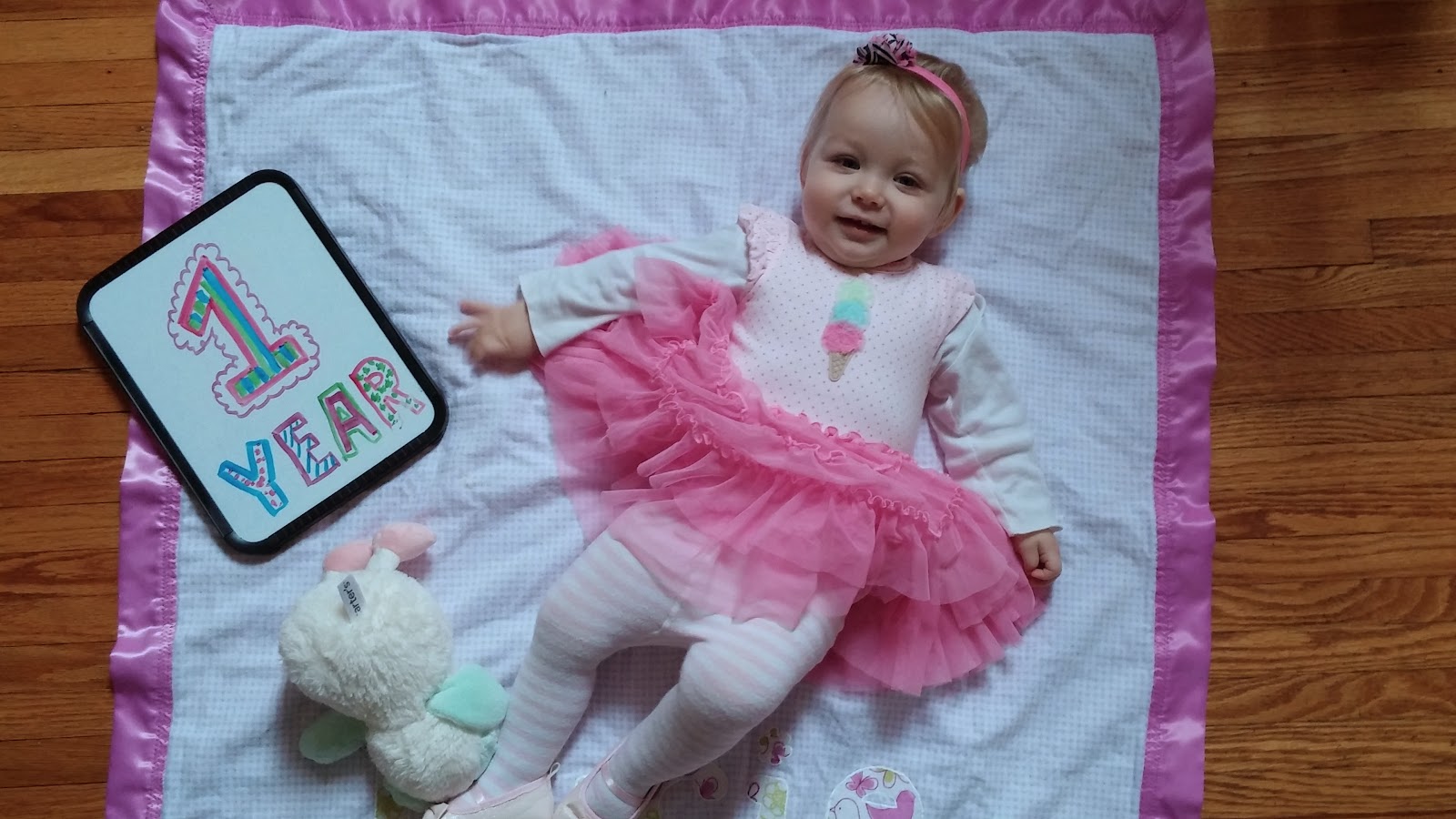 I can't believe I am writing this post already!  Our sweet Bean is officially 1 year old! It is hard to believe it has been a year since Bean came into the world.  In some ways it seems like just yesterday we were in the hospital meeting her for the first time, but in other ways, it seems like f.o.r.e.v.e.r ago!

This past month has been quite the doozy.  All that great progress we had made on sleeping through the night seems like a distant memory.  We are back to a child who is up multiple times at night.  I keep holding onto the hope that "it's just molars", but beginning to lose hope.  Although, I do actually feel a molar in her bottom gum.  I keep thinking "any day now!" it'll just pop through, but so far it's just bulging in the gum.

Steve has really stepped up and has helped out a ton in getting Bean to sleep and taking turns with her in the middle of the night.  I miss my uninterrupted sleep.  On Saturday's, I let Steve sleep in.  On Sunday's, it's "momma's morning".  I don't really get to sleep in, but I get to take care of myself and get ready for church in peace while Steve tends to Bean.  It's nice to have a break on the weekends! Helps me recharge my "mom batteries" and ready to face the new week!

So back to Bean and her not sleeping -- not only has she decided to wake up multiple times at night, she's also figured out how to put up the fight for naptimes.  We've had our phases of her fighting naps, but typically a tooth pops up or we realize she has a fever and there's a justified reason for the sleeplessness.  However, we're going on a few weeks with no obvious reason.  She did have another little tooth pop through, but that didn't help in her hatred of sleep.  I'm beginning to fear that she's getting too big for rocking, but I'm not ready to let go of that one! We always read a few stories, and she'll typically snuggle down, suck on paci, play with blankie and eventually drift off while I'm singing to her.  However, when she's fighting sleep, she'll push away from me, rip paci out and throw it on the floor, and babble loudly.  When she does this, I put her in her crib, turn on her glow worm (sings for 10 minutes) and leave her be.  Sometimes I'll have to go back in and rock again.  It may take awhile, but she usually gives in.

I know she's getting close to giving up her morning nap, but I'm not fully convinced she's ready.  Last weekend, she went 3 days in a row with only 1 nap a day, and by day three she was a completely different child - cranky, whiney, defiant.  The next day, I made she she got 2 naps in and she was an angel.  So I'm not giving up the morning nap yet!  Although, I don't stress about her getting 2 naps every day.  A couple days a week, when I run, she'll take a short morning nap in the stroller; a couple of the other days, she'll take a bigger morning nap; and at least one day a week (Sunday) she gets only 1 nap.  So we're slowly transitioning to a 1 nap a day schedule.  I pretty much let Bean dictate what she wants, but there are certain times I abide to (like she has to be up from nap #1 by 11am, and up by 4pm for #2).  We shoot for bedtime by 8, but when she fights us, it can take up until 9:30.  Ugh.

Now the positives of the month -- this girl is learning and growing everyday!  She'll do things, and Steve and I are amazed at where she's come up with some of the stuff she does.  One of her current favorite things to do is shove random objects in her ball toy (you put balls in, hit the hand, it lights up/sings and the balls roll out).  We'll find blocks, Weebles, rings, pens, and even crackers in there! What a goof!  She still shoves things in her snack cup, too.  She also is developing a love for books.  She's constantly turning their pages and playing with them.

She's babbling a bunch, and has added "mama" & "ball" to her "dada" & "duck" vocabulary.  Although, this past week, she's discovered some pacifiers in her toy box and prefers to suck on them while she plays.  I never let her do this until now.  I think she chews on them and it helps her gums.  So once this molar does pop through, the paci will disappear ;-).  She's constantly making squeals, shrieks, and growling noises.  Sometimes she'll try to mimic me and sing with me.

She's still not walking, but getting closer.  She cruises a lot around furniture and is getting much faster.  She'll also hold our fingers and walk around, but she won't last long before going to her knees and zooming off. I'm thinking she's gonna be one of those kids that just stands up one day and takes off.  Maybe not, haha.  She's figured out how to crawl into her toy drawers and I often find her trying to stand up on toys too.  She is fearless and definitely doesn't get that from me!

We love watching her cute little personality come out.  She definitely knows when she is the center of attention and how to work the crowd.  She'll cock her head to her shoulder and do a crazy smile, she'll make herself laugh to get you to laugh, and when that doesn't work, she'll blow raspberries.  She is quite the sweetheart -- She loves to share her food and gets a kick out of trying to feed us.  And if you discipline her with a stern "no!", she immediately breaks out sobbing.  Steve and I definitely have to work on not laughing when she does this.  She's just so stinking cute!

I'm not sure what her weight and height are (she goes next week for her 1 year stats) but I do know from the bazillion doctors visits in the past couple months that she's around 20 pounds and probably around 28" long. Her favorite foods are still mac'n'cheese (from the box, not homemade!), bananas, and cottage cheese.  I'm having a hard time trying to make dinners that she'll eat.  I don't cater to her at dinner.  If she doesn't like what I serve, she'll get her cottage cheese and a fruit, but I won't go out of my way to make her something else (okay, maybe if there's leftovers she'll get that).  This past week, we've transitioned her from formula to whole milk.  I wanted to transition her from bottles to sippy cup at the same time, but she won't drink the milk from a sippy (although she'll guzzle water down in the sippy and she'll guzzle the milk in a bottle).  So I guess I'll keep cleaning bottles.  I still offer her milk in the sippy each day, and hoping one day she drinks it. 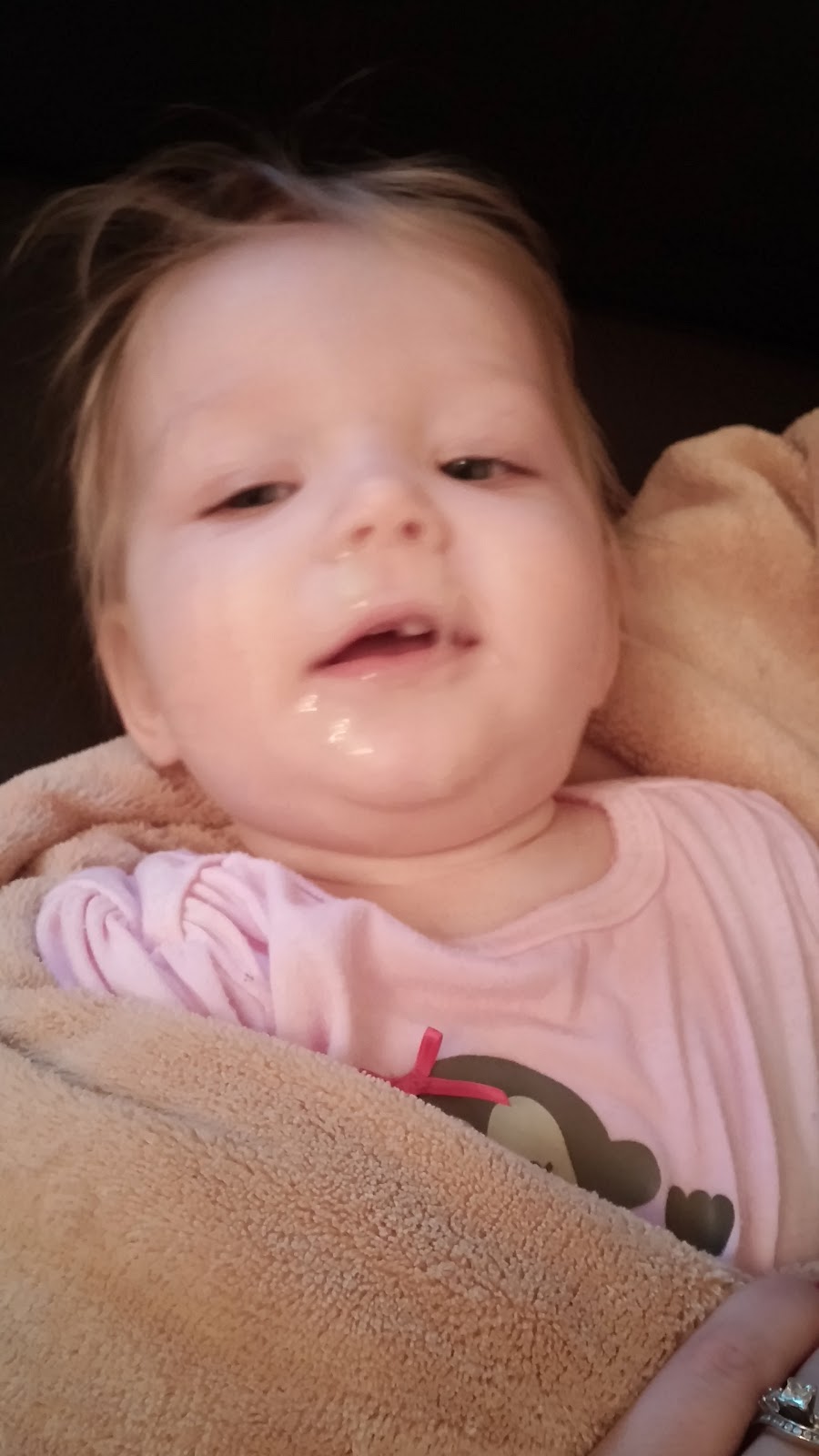 (Sorry for the gross picture first, but let's get it out of the way.  Bean was sick at the beginning of the month.  Constant runny nose, snot galore, etc.  I took her to the doctor, but they said ears looked good and chest sounded good.  So we just had to ride it out.  Took awhile, but she eventually got over it.) 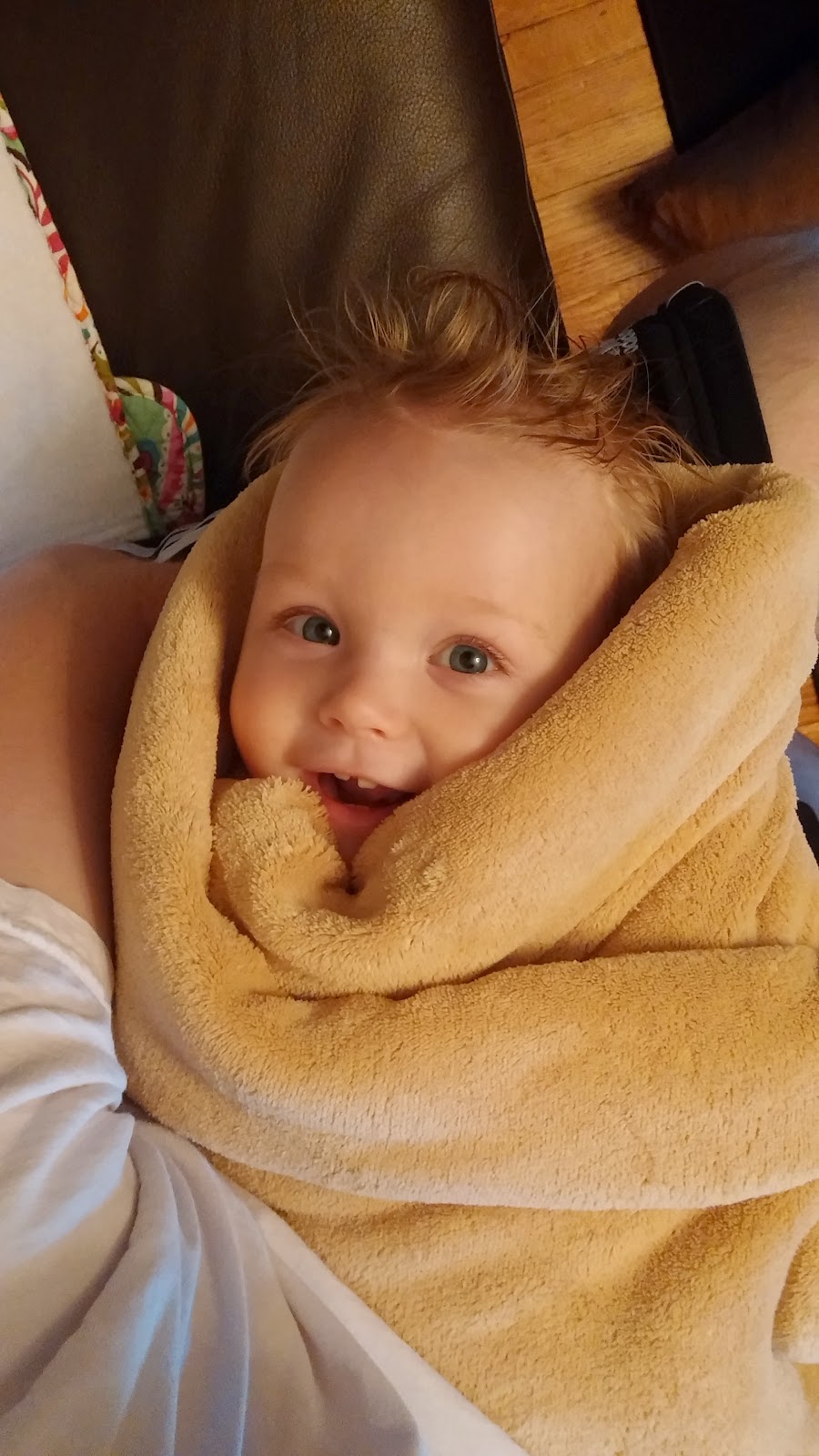 (I really hate using the snot sucker.  I also know it can cuase more problems than good, so typically I just use a qtip to clean out her nose.  However, being sick brought on serious snot.  So I had to use it.  She hated it and would constantly hit and fight me.  So I devised a "fun" plan.  We'd wrap her up in the blanket.  She would think it was hilarious and didn't even care that I'd clean her nose out while she was wrapped all snug.) 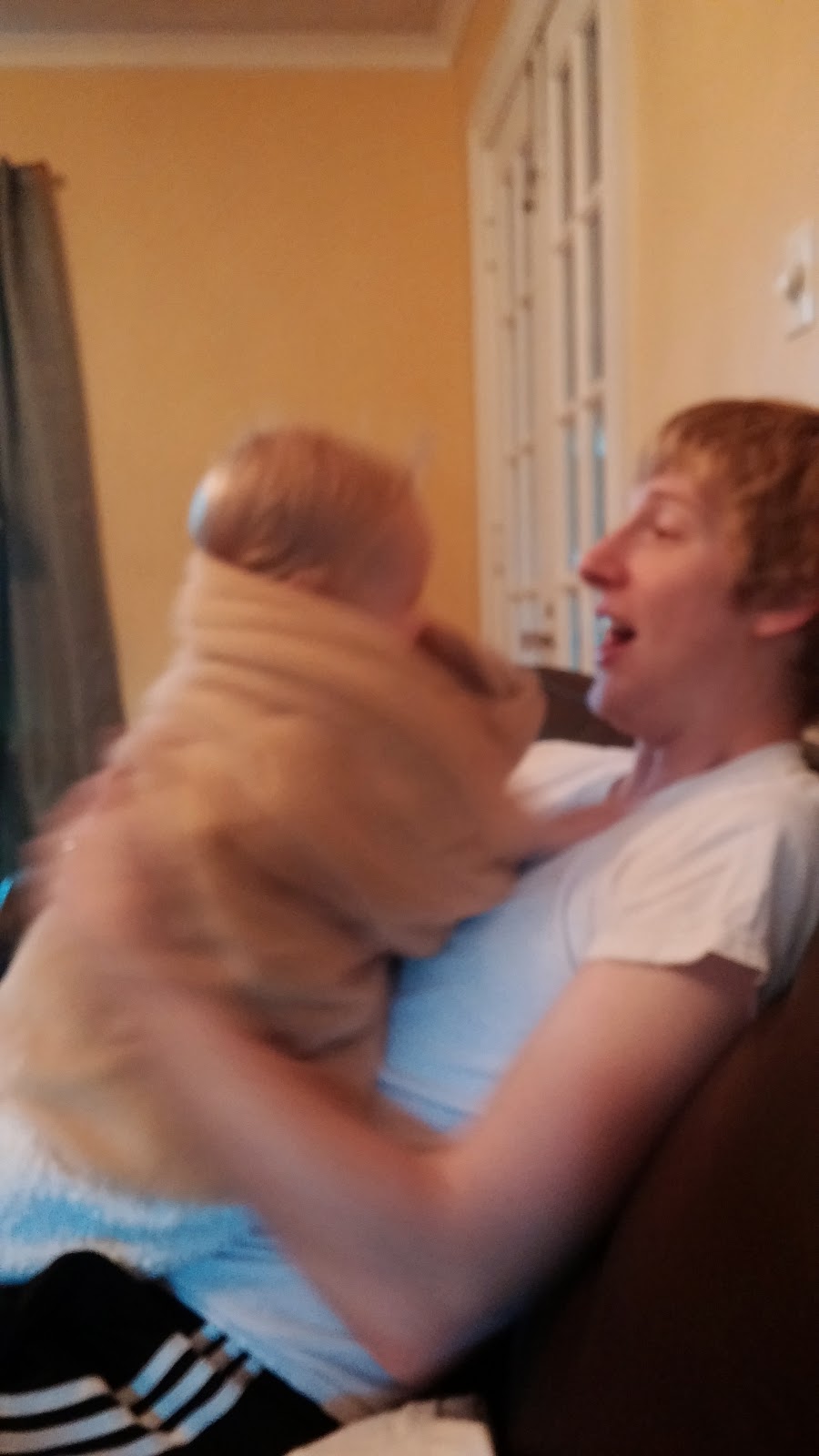 (Dad got in on the blanket action.) 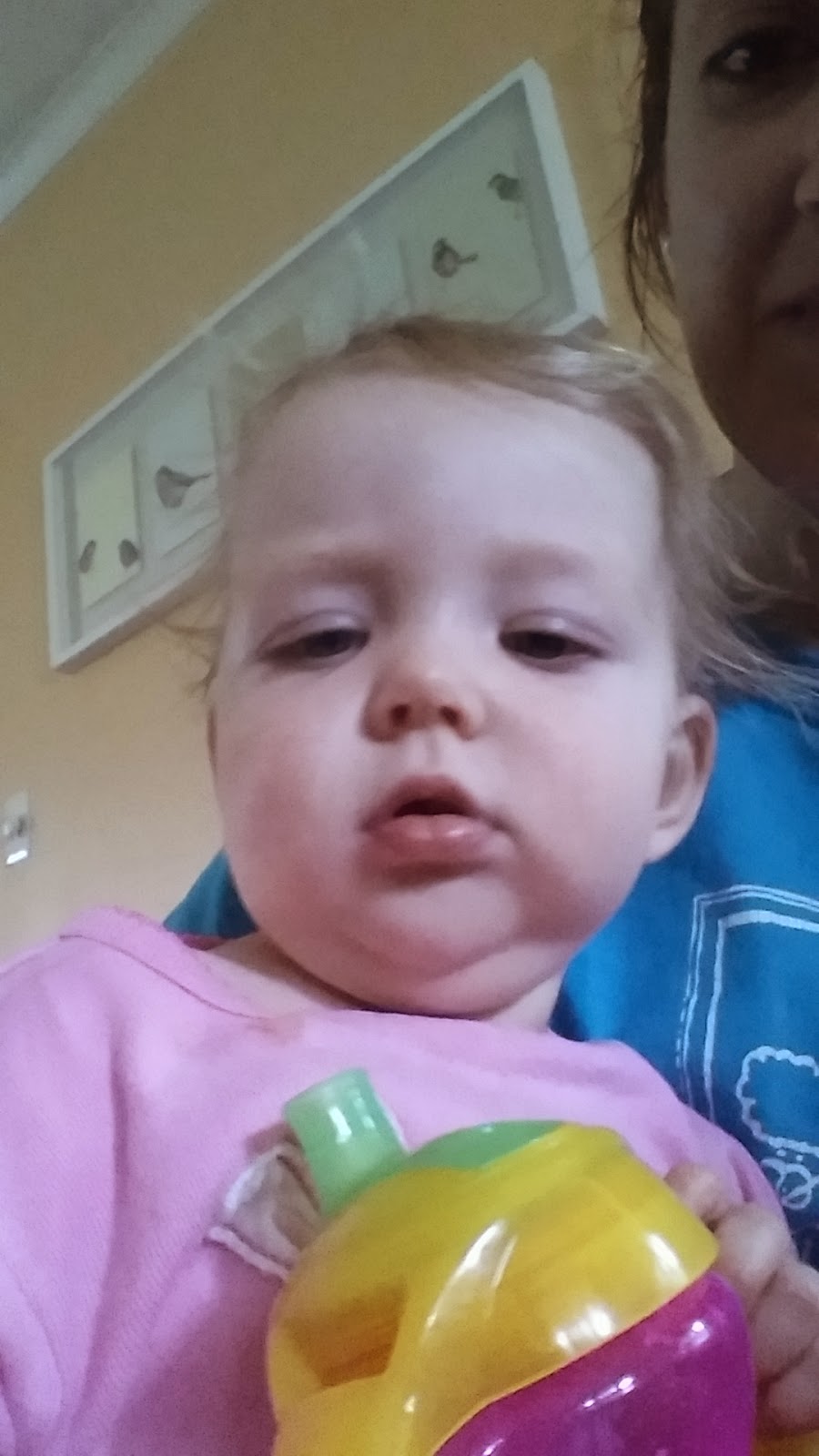 (Still from when she was sick.  She took an epic nap and woke up like this, haha.) 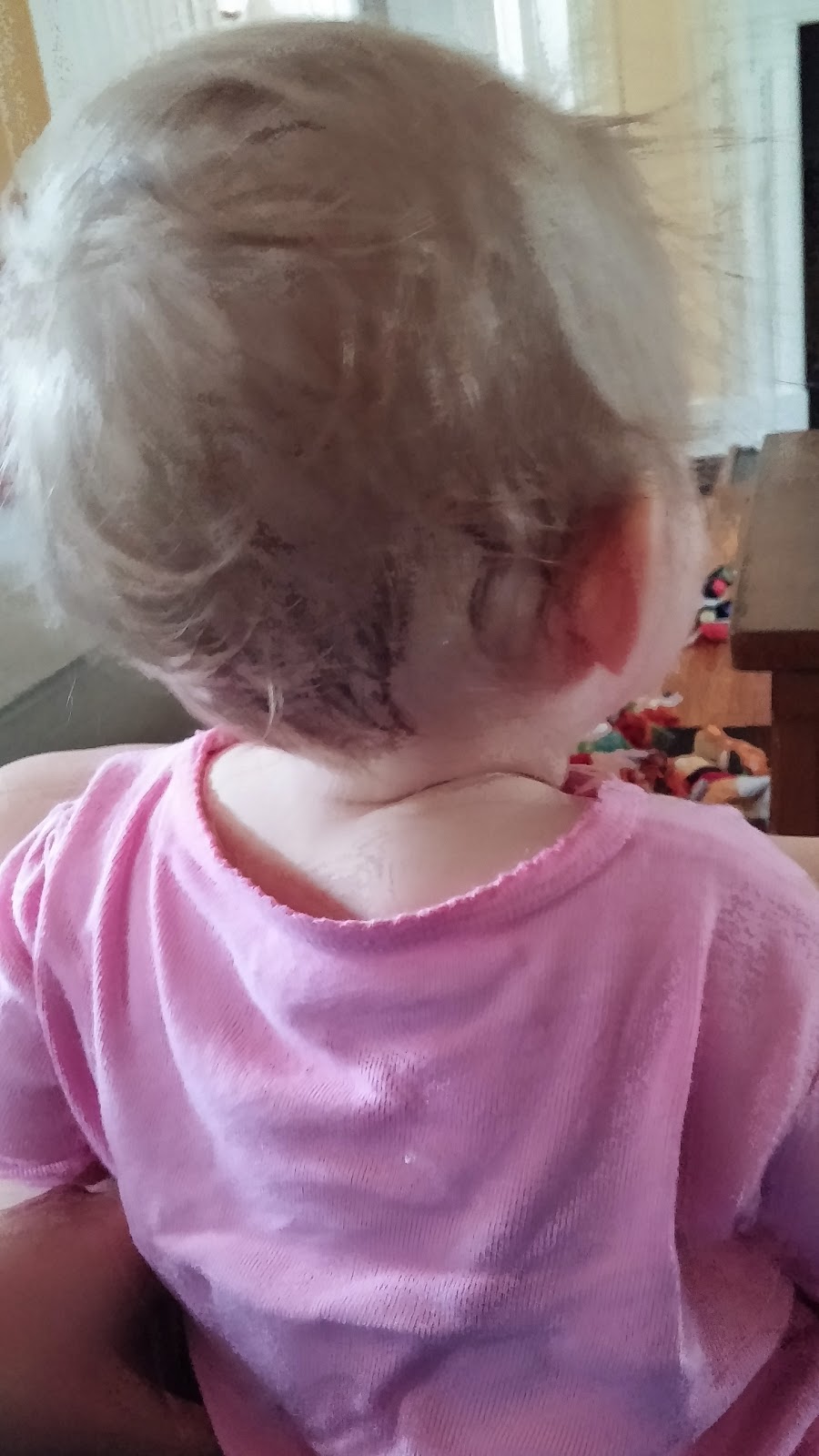 (Check out that sweaty hair! Bean gets really hot when she sleeps and having an off/on fever didn't help!) 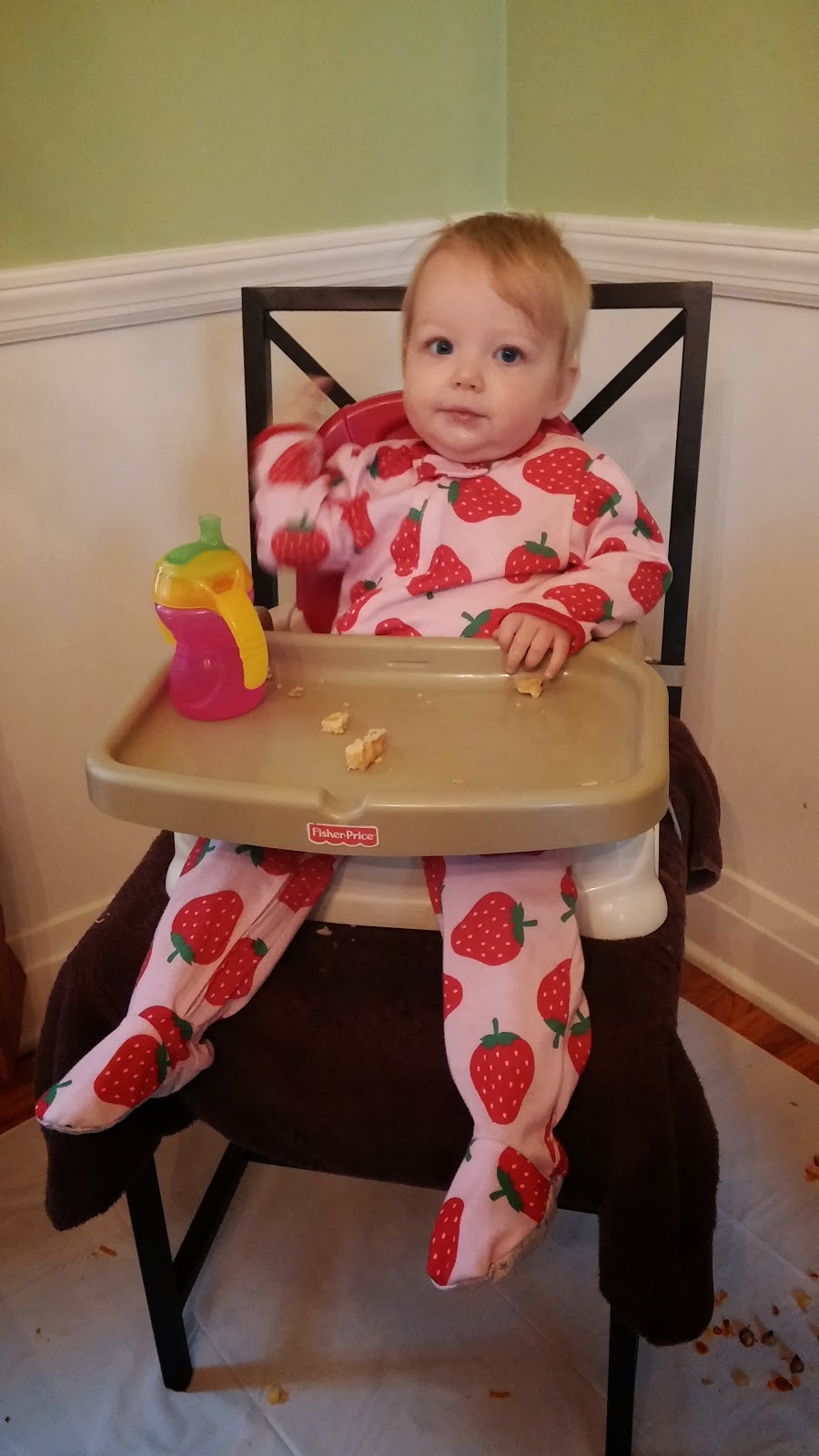 (There's no way she's this big!!  Okay, really, she's leaning back in her chair and it makes her look huge.  We'll go with that anyway.) 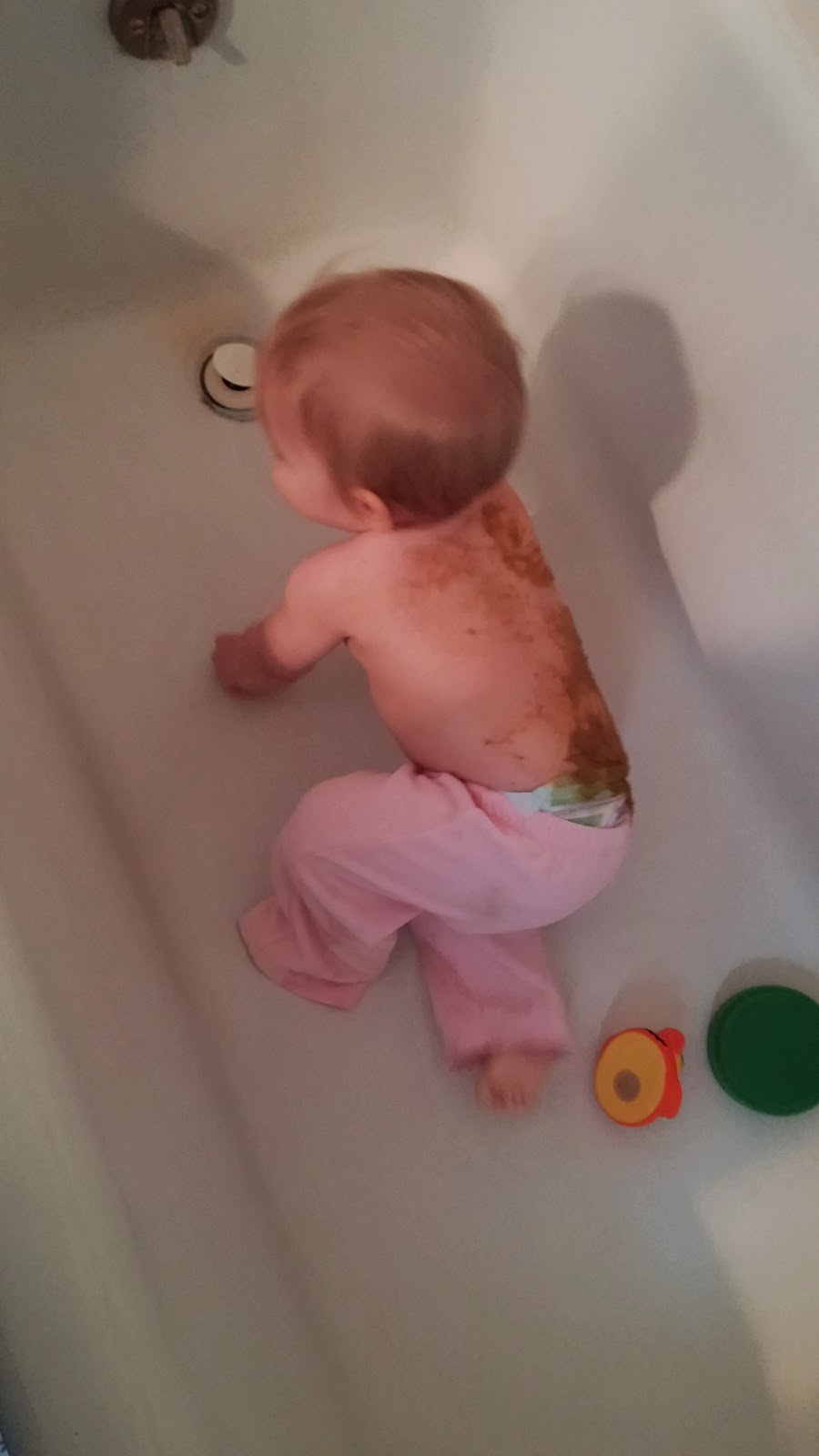 (Oh, and this happened.  We were sitting in the living room and when all of a sudden, Steve jumps up, grabs Bean and says "What do I do?! What do I do?!"  I had no idea what was going on until he turned her around and showed me the poop coming up out of the top of her shirt.  Disgusting.  We immediately put her in the tub.  Steve actually stayed around for emotional support as I wiped up what I could before just turning the water on and spraying her down.  This was by far the WORST diaper.  EVER.) 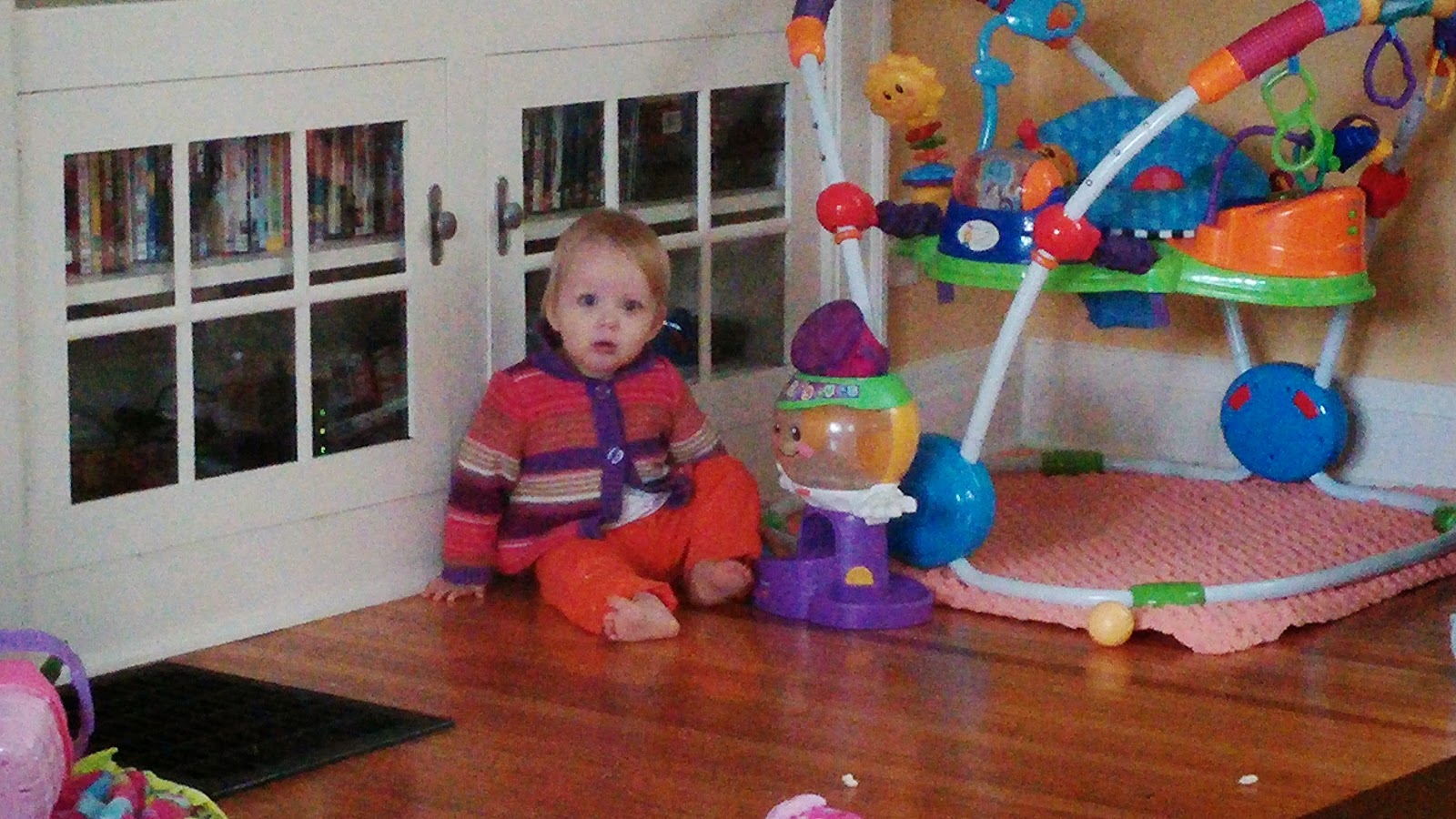 (Why yes, that is her snack cup IN the top of the ball toy.) 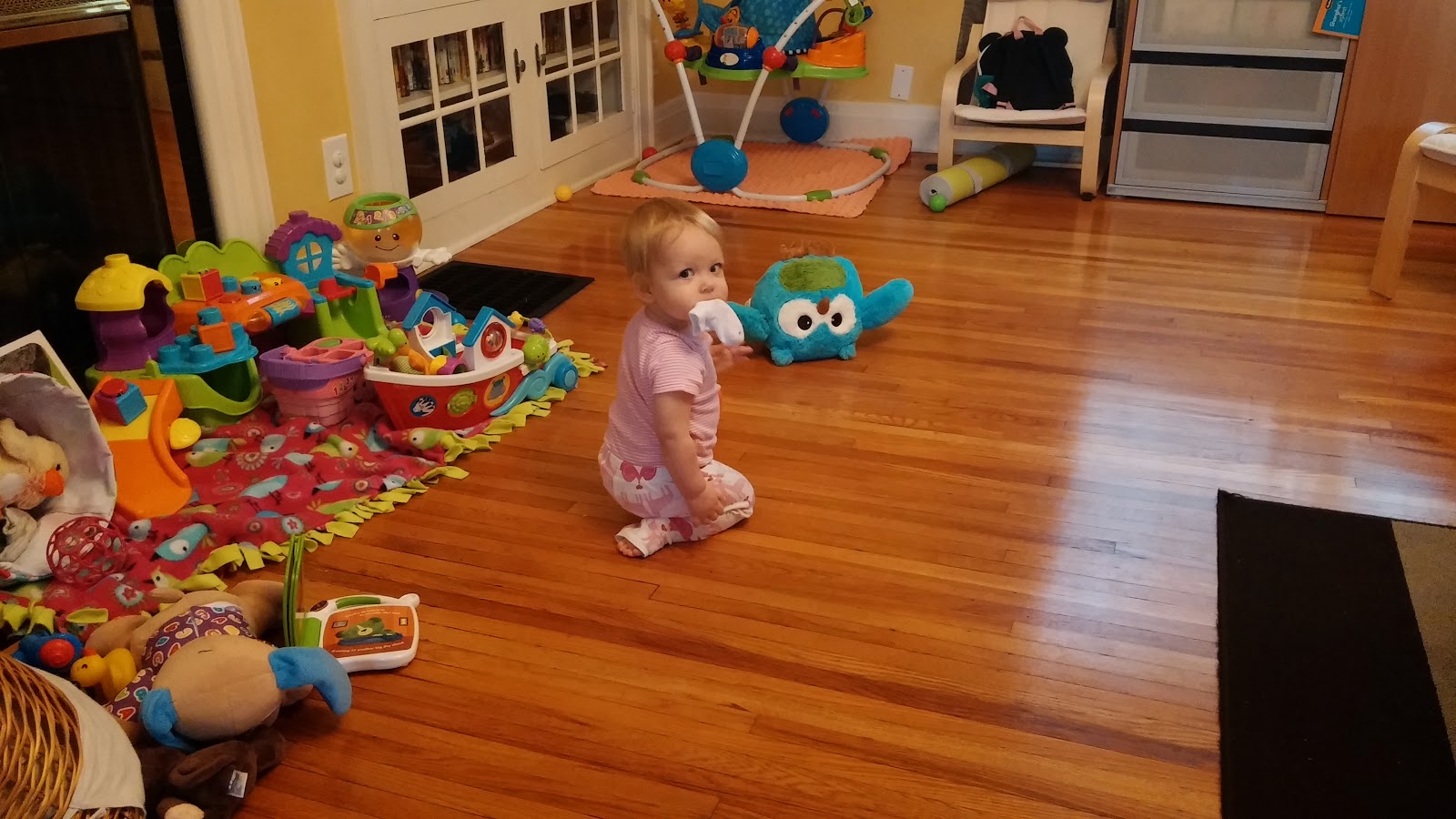 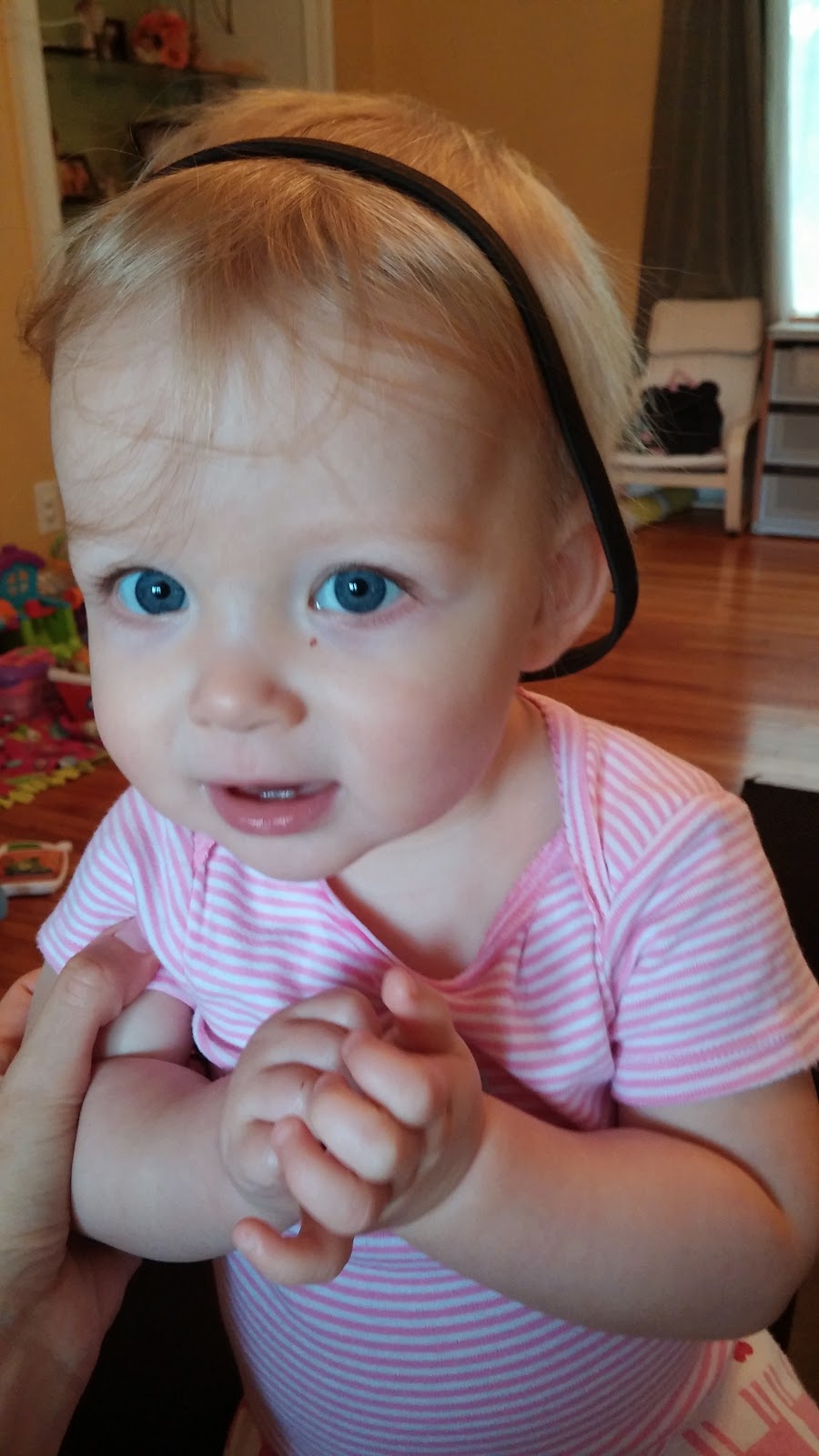 (She loves playing with my headband and actually put it on herself.) 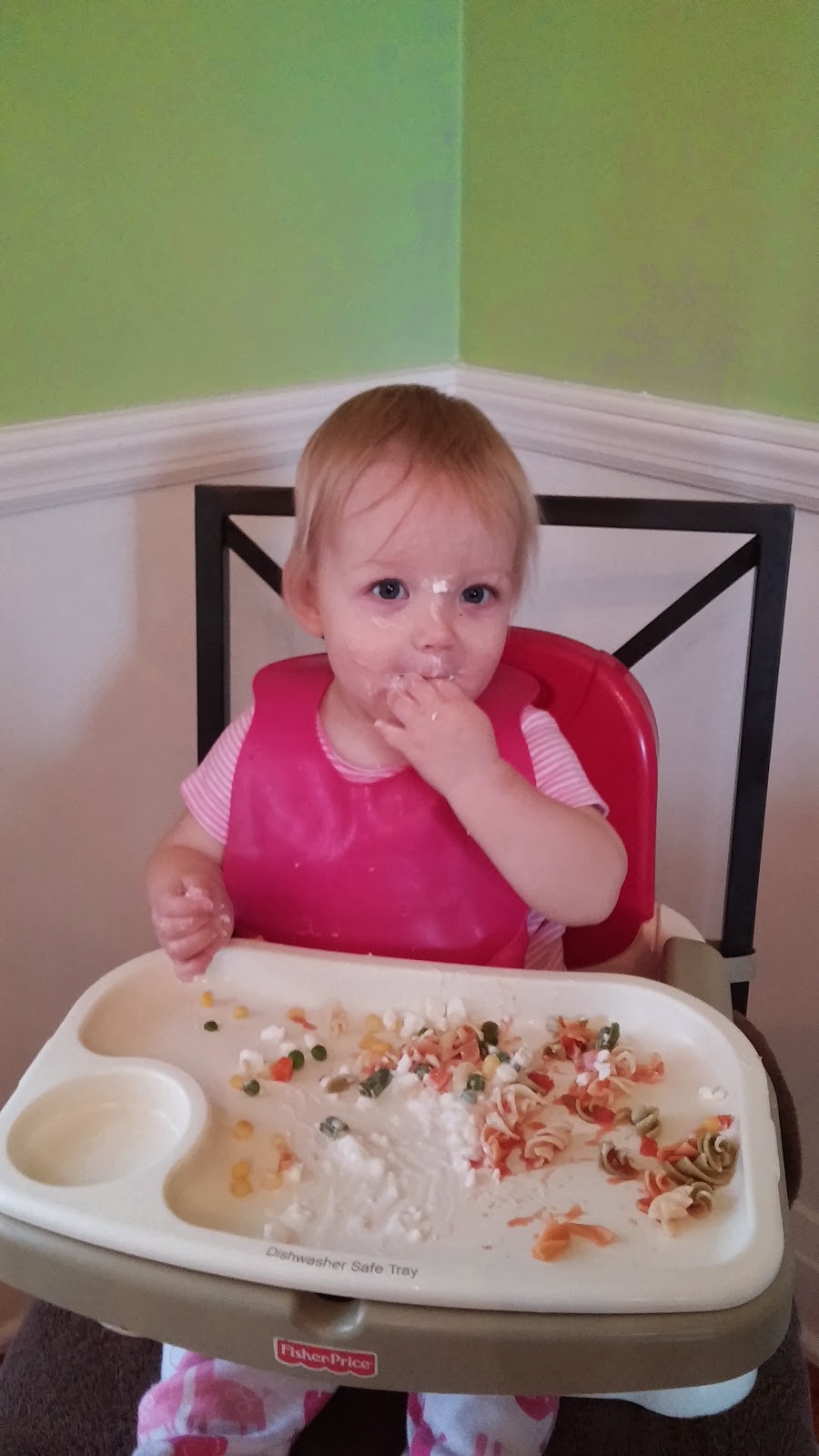 (Mmmmmm, cottage cheese - notice that NONE of the noodles have been touched.) 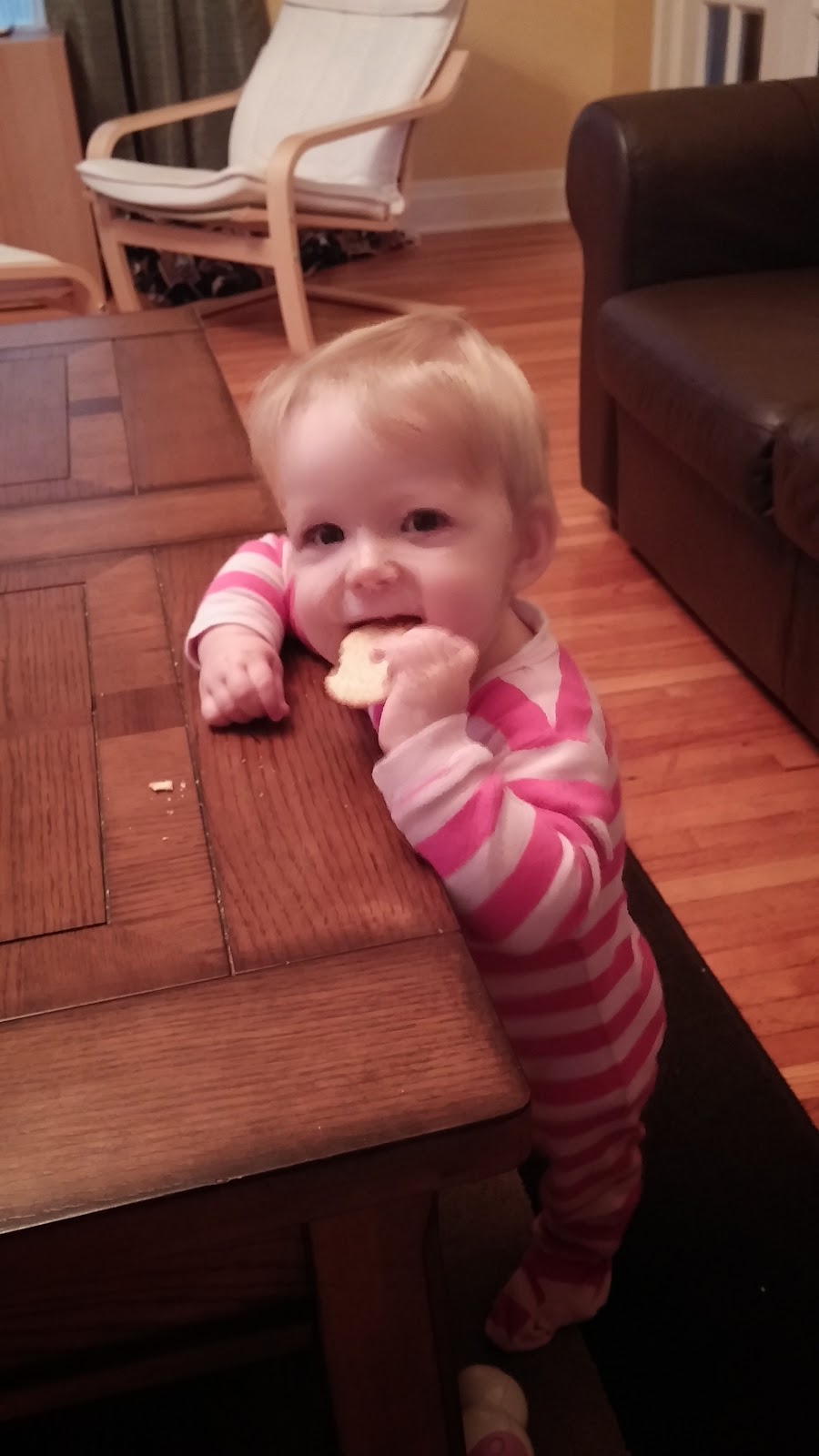 (Bean was having a hard time figuring out how to "take bites", so I started to give her crackers and she'd have to nibble on them.  Only a couple times did she shove the whole thing in her mouth.  Now she's a cracker pro and loves eating them. She beams with pride when she has one.) 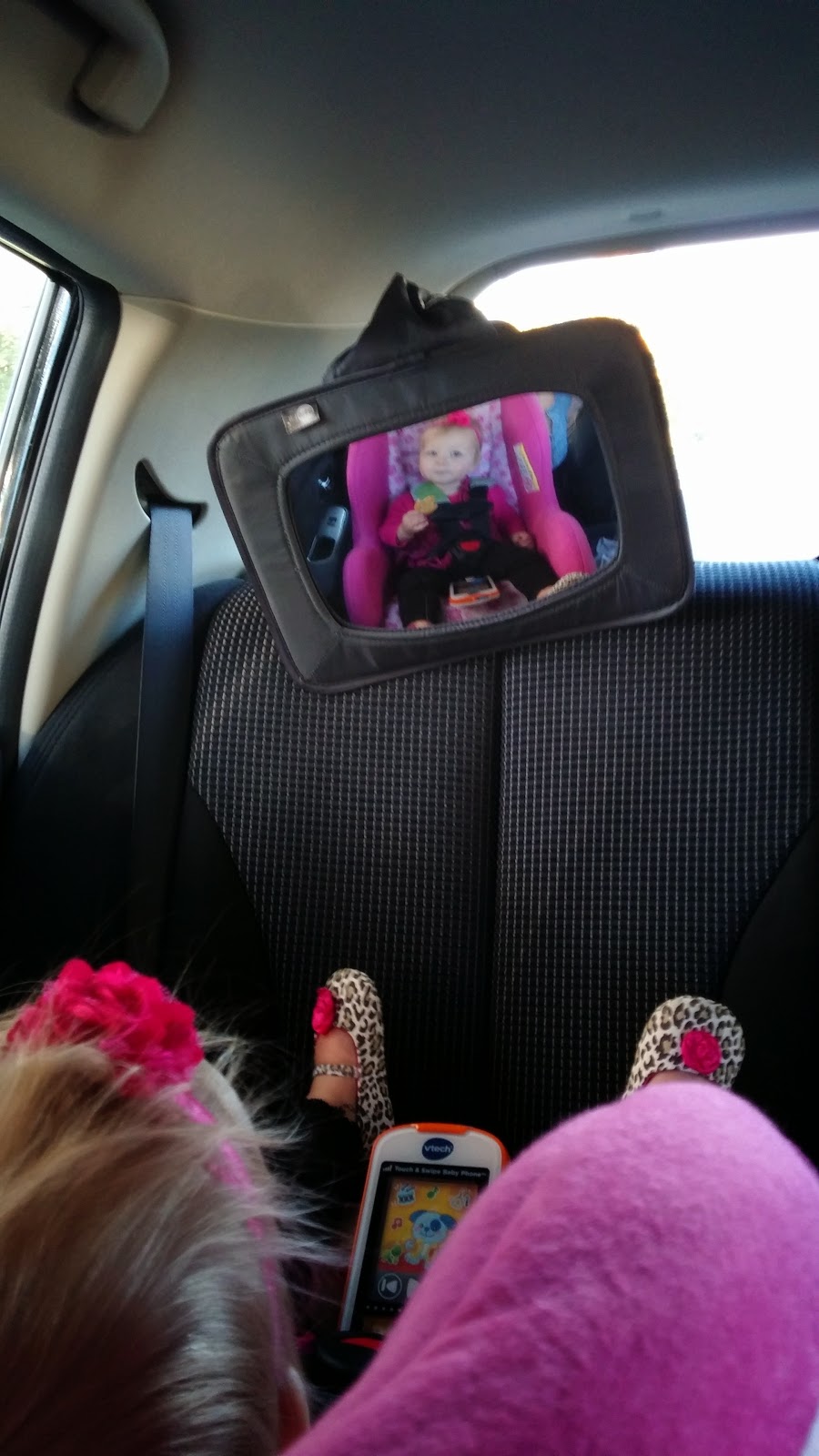 (It's hard to tell in this picture, but she's eating a cracker.  I gave her one on the way to church.  It takes about 10 minutes to get there, and when we got there, she still had 3/4 of the cracker. I guess she was trying to make it last?) 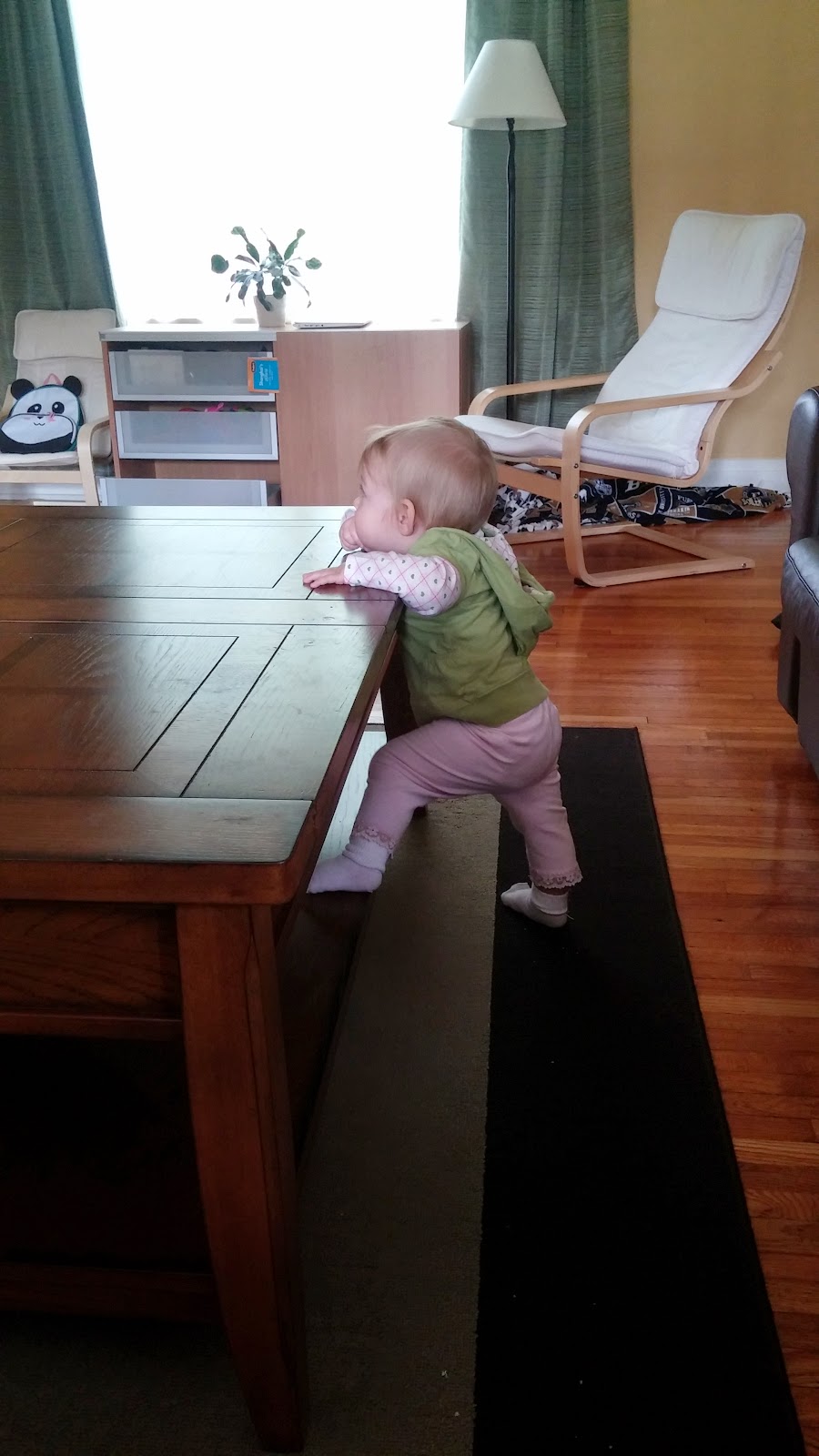 (How she watches tv.  No joke.  I let her watch a couple cartoons in the morning and a couple in the afternoon.  She will stand and watch them like this.  Her current favorite show is Curious George - oh and Arthur in the afternoon!) 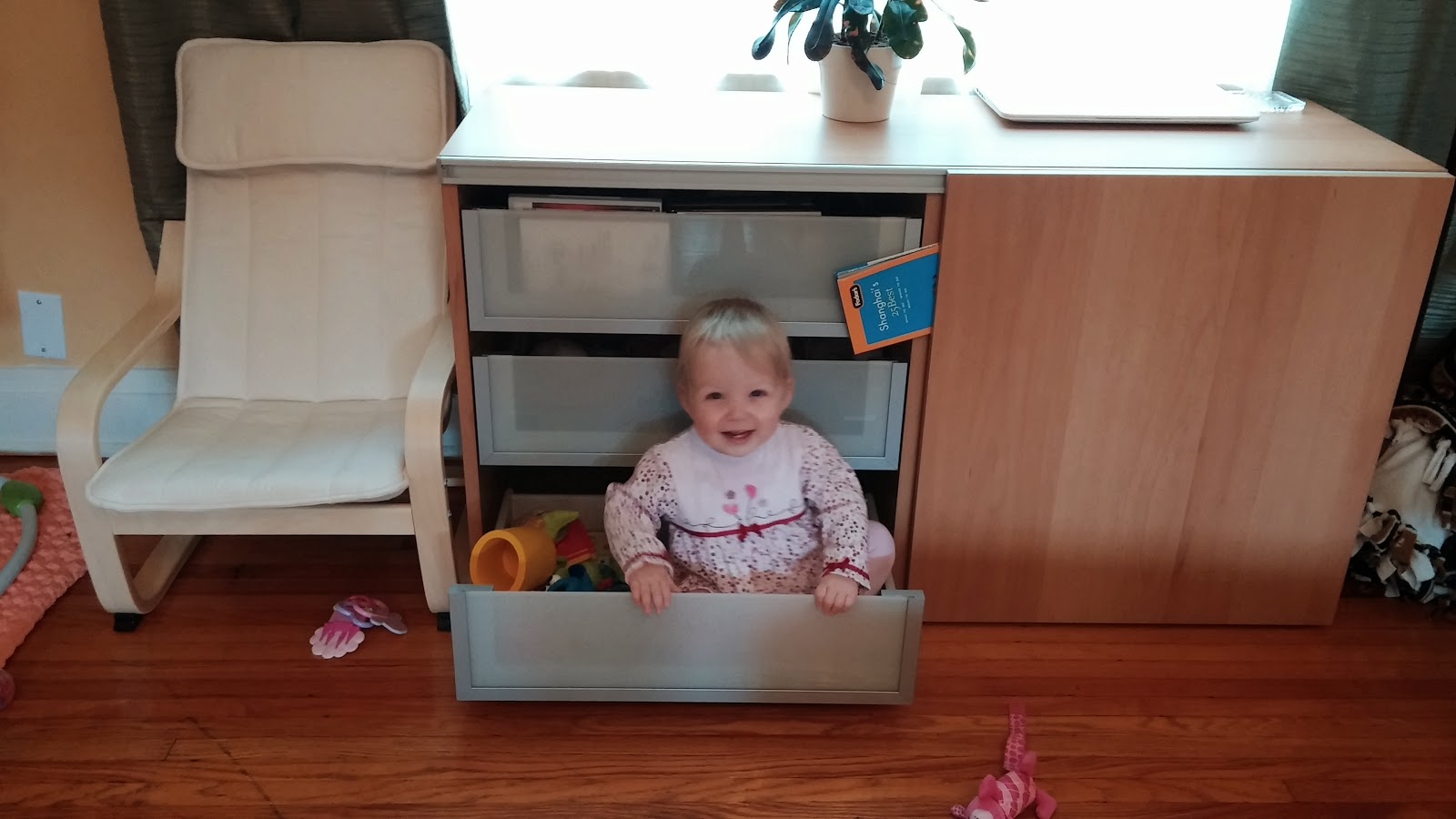 (Such a ham!  She got really quiet while playing over by the toy drawer.  When I looked up, this is what I saw.  She had tried to do it earlier that morning, but got one leg stuck in and one leg out and holding on with her hand.  It was quite comical.  I've been told that she does something similar to this in the nursery at church.  She'll take all the toys out of the little bin and climb in.  All the ladies say she provides the Sunday morning entertainment.  I'd believe it!)
Posted by Unknown at 9:50 AM