When Steve told me a year ago that he'd be going to China for a couple weeks on business, I immediately began to dread the trip.  I was elated when it was canceled/delayed last year.  When he told me they'd be going in May, I didn't believe him.  He would tell me about China meetings to plan the trip, about buying tickets, and finalizing the trip.  I still didn't believe him.

I delayed packing for him until the last possible minute - like the night before.  I still had hopes that it wasn't going to happen, but knew he'd put too much planning into it for it to get canceled.  He stayed home a little Monday morning, just so we could have a few extra hours of family time.  He left for work just before 11 and we said goodbye to Daddy for a few weeks.  (He left from work that evening to drive to Detroit.  He then flew out early Tuesday morning with a small layover in Seattle).

With Bean and I on our own for the next couple weeks, I had several projects planned and quickly got to work.  I think subconsciously, I knew that if I overloaded our schedule, time would go by quickly and I'd be too tired to worry about Steve's absence.

Steve was 12 hours ahead of us.  We got to Skype with him in the morning, before he went to bed.  He always looked tired and sounded discouraged.  He was sick of Asian food by day 2, and discoverd the language barrier to be way worse than expected.  I think he developed a case of homesickness and really missed "his girls" as he calls us.  I knew it would be hard for us, but guessed it would be harder for him.  After all, we had the comforts of home, friends, and family to help us pass the time.  He didn't. Since China is communist, he couldn't access even some basic internet favorites like google (gmail), Facebook, or even Youtube!

I had originally planned on just packing up and having out at my parents' house in IN for the 2 weeks, but then realized I'm an adult with real responsibilities.  I had to be in Lima during the week so that I could babysit! So Monday - Friday of the first week I was local, but then packed Bean up and headed to IN, returning back to Lima on Wednesday.  On Thursday, Bean and I headed up to Detroit to pick Steve up at the airport! He rode up with a coworker, and had originally planned to ride back with him. However, I realized that by the time he got back, Bean would be in bed, so it made more sense to drive the 2 hours up to see him, so we had the time together in the car.

Bean did really good not understanding what was going on.  She would ask about daddy, and I'd always remind her that "Daddy's in China!" She seemed okay with that answer.  When she asked about him a lot, I'd show her pictures on the phone, and of course, she got to Skype with him, too.  I think towards the end of the week, she thought Daddy lived in my phone.  She'd say "Daaaa-eee" and point to my phone.  She and I were with each other around the clock, and got pretty close.  I kind of feared us getting too close (I'll post more about that in the next couple posts, but my fear came true.  She got very dependent on just me.  She loved having Steve back home, but would get upset if I left her with him.). 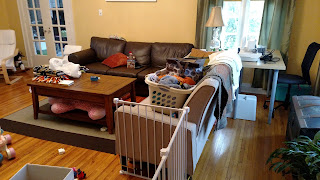 (Once Steve left, I set up "sewing land" in the living room.  I set up my sewing desk on the outside of the gate so that I could work on some projects while Bean played in the living room. This set up actually worked really great! Only issue was that I rarely had time to sew! We were busy with going places, playing outside, and watching James! I didn't want to sew during naptimes, in fear of waking kids up, so I only sewed for an hour each morning.  I only got 1 baby blanket mostly done, and another half done. I kept sewing land up after Steve returned and knocked out those baby blankets and a couple outfits for Bean! Now sewing land is in the sun room.  Bean is good about playing in the living room, or coming in and playing in the room around me while I sew.) 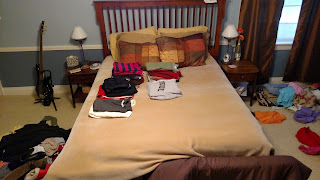 (Another project that took a few days was cleaning out the closet and switching out winter clothes for summer clothes.  Of course it was 80 degrees on the day I switched the clothes, and it dropped to the 60s the next day.  That always happens! I still have to do Bean's clothes.  I've been in a bad habit of throwing any clothes that don't fit her into a big box.  I need to sort through it all and properly put it away.  I also took Bean clothes shopping one day and got her a new summer wardrobe! We are officially out of hand me down clothes, so she was in some desperate need of her new size - 3T!). 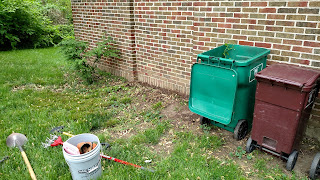 (I randomly decided to pull the trigger and do a small garden.  We went to Menards, I bought a couple plants -- 2 varieties of tomatoes and some sweet peppers.  I had to make up an area by weeding, edging, and planting my veggies.  I was able to do it all while Bean slept.) 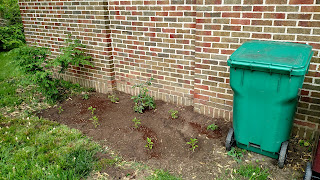 (Finished garden! It is located on the West side of the garage.  This is about the best sun location without it being in our front yard.) 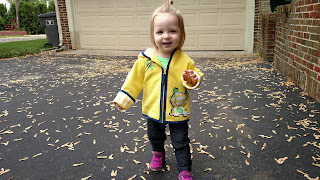 (This also happened -- all the helicopters fell! We did a lot of playing outside, so while bean played, I tried to sweep up some of the helicopters.  They just kept falling, so you couldn't really tell.  Oh well, I tried!) 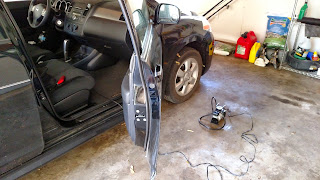 (The day before we were to head to IN, my "low tire pressure" warning light came on!  I emailed Steve and he explained what I needed to do.  I did know how to test the pressure, just wasn't sure what I was aiming for.  I tried each tire and discovered that 3 were just about right, and 1 was 7 pounds too low! Eeeks.  His email explained how to use the compressor to fill the tire back up.  It took me a few minutes (and a non-helpful call to my sister) to figure out how to lock the compressor onto the tire.  But I figured it out, and we made it to/from IN and even to and from Detroit without any issue!) 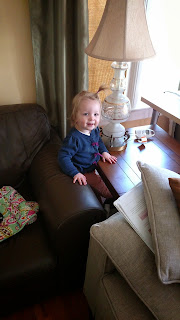 (Of all weeks for Bean to figure out climbing. . . We had been lucky that it took her so long to realize she could climb up on the dark couch all by herself.  1 day into Steve's absence and she climbed up onto the couch, over the armrest, and got stuck in between the end table and the couch.  She freaked out over getting stuck and didn't do it again; however, there was lots of climbing on the couch in general.) 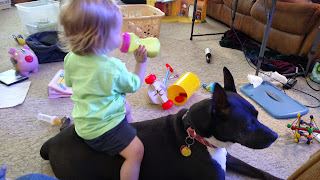 (My mom was gone while we were at her house.  So I was the lady of the house in her absence, haha.  While I was there, I cleaned and readied the house for Memorial weekend visitors.  Bean did a lot of playing on her own- and of course with Coco the dog!) 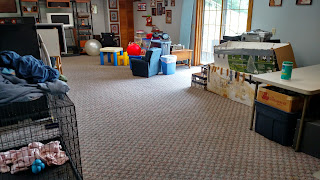 (My sister Amber got the idea that we should clean up the basement for my mom while she was gone.  My brother even worked his schedule so that he could come and help.  I'll spare you the before pictures, but let's just say, you couldn't see the floor or navigate at all.  2 truckloads of trash/recyclables left, along with an SUV full of my brother's stuff, and a van full of items donated to Goodwill! Mom didn't know that we had planned this clean-out; although, information was leaked and she had a slight concerning freak out over it.  We assured her we weren't just throwing her stuff away, and she was thankful for the clean basement when she returned! Dad was there the whole time, although he wasn't involved.  He was especially thankful, too! We got the "backroom" cleaned out too, so that he could actually access his workbench again!) 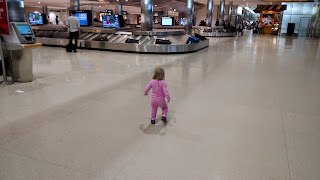 (Bean was a trooper for all the time she spent in the car.  3 hours on Wednesday, 4 on Thursday, and another 3 on Friday for our return to IN for Memorial weekend.  I had planned of just hanging out in the cell phone lot at Detroit, but who knew their cell lot was BEFORE you even got to the airport exit?!  I couldn't figure out how to turn around to get their, so in a last second decision, I parked in the parking garage.  It ended up working great, because I needed to potty and Bean was ready to run around! I let her run around as we waited for Daddy to show up to get his bags.  He knew we were coming, but didn't know that we were meeting him IN the airport.  His phone had died, so it worked perfectly!) 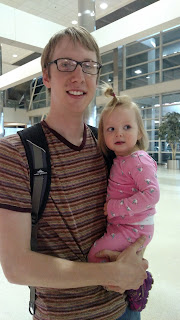 (Daddy's back!  She was excited to see him, but more excited to continue running around!)

All in all, we survived, but I'm very thankful for Steve being home.  Being a single parent is exhausting.  I don't know single parents function (and I only have 1 child!) other than by the grace of God, haha.
Posted by Unknown at 2:05 PM