I was skeptical about putting in subway tile.  First off, I thought it was going to be waaaay to advanced of a project for us (I had nightmares of all the tiles crashing and shattering as they fell off the walls) plus I thought it'd be too much white.  It was the cheapest tile option, so I trusted Steve and gave him the "OK".

We had plans of knocking the tiling out in a weekend.  I didn't think it was going to be possible to tile with Bean in the house.  We didn't want to ask my parents to come back and help again, so we just made do the best we could.  Steve had to do a lot of prep work with the tiles -- measuring off straight lines, marking tiles to be cut, etc. He worked on the prepping while I kept track of Bean.  Once she went down for nap, I joined in helping.

Really, Steve did all the first round of tiling.  We were given a bunch of tiles from friends that needed cleaned.  So I went through and cleaned them all.  Steve got to work on putting mastic and tiles on the wall.  He started on the smaller area behind the stove and worked his way up to the big area on the other half of the kitchen.  I was pretty much moral support.  Once Bean got up, we called it quits (could've done more time-wise, but we were tired and got a good portion done).  We changed our desire from getting all tiling and grouting done by the end of the weekend, to just getting the tile up. 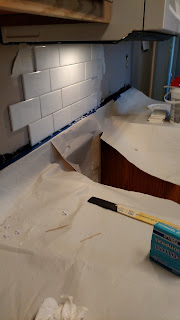 (Steve started in the middle and worked out to the left and right to ensure everything to look right!) 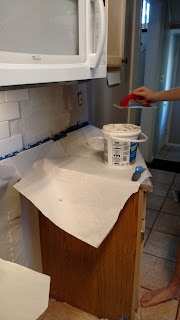 (He put a good layer of mastic on the wall, would score it, put some on the tile, score it, and then apply to the wall.  He used even used spacers to ensure straight lines!) 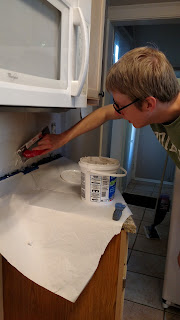 (It was a lot of hard work and we were both sore from all the bending over.) 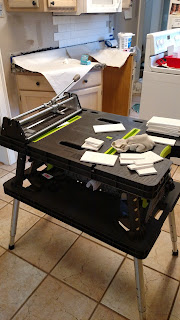 (For Christmas, Steve got this portable work bench. It came in really handy on this job! This is where all the tiles were prepped and staged for application.)

On Sunday, we got a late start in working (church came first!).  Once we got home, we quickly ate lunch, got Bean down for nap, and went back to work! Steve continued on putting tiles up on the west wall while I started grouting the tile behind the stove.  I watched a couple YouTube videos and decided I could handle it.  I couldn't quite get the hang of using the sponge without having too much water in it (in other words, when I wiped off the grout, there was too much liquid and it would streak).  I figured out my own system of using the sponge some and paper towels some. 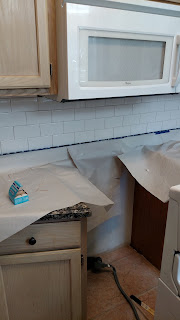 (All the tiles are up and ready for grout! I worked on this area while Steve continued laying tiles on the other side of the room.) 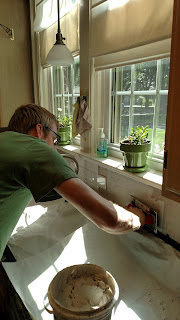 (He used window as the centering for this section and then worked his way to the left and right.) 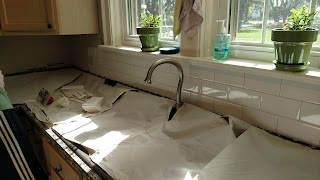 (He would work in small sections at a time.  That way, when it was time for grout, I could use his same sectioning to ensure it was dried and ready for grout.) 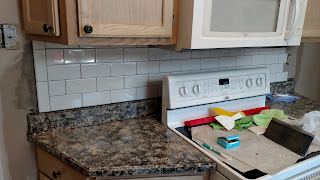 (We chose to do a fancy edged tile on this section since it had weird placement between the cabinets and counters.  I kind of got a little crazy with the grout on the wall.  Good thing we still had to paint!  You can see on the right side how some tiles were still missing.  Those needed special cuts on the wet saw and were added in later.  Best part of the grout/tiles being done -- the stove got to be put back in place and was usable again!)

There were a few areas that we couldn't finish during our intense work weekend.  We had a few tiles that needed to be specially cut to fit around outlets, cabinets, and corners.  Steve got all the tiles up and I was able to grout the tiles (after they'd been up 24 hours).  I continued to work on the grout over the next few days (during naptime!).  Steve borrowed a wet saw from a coworker, cut and laid the tiles over the next few days as well.  I finished up the tiling by using a grout caulk to seal up all the seams.  We may not have met our weekend goal, but I'd say a week isn't too bad! 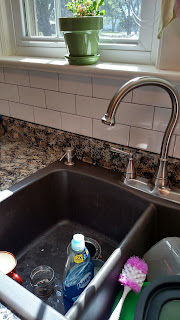 (This area was hard to grout with the faucet.  We debated on taking it out, but I really liked being able to use the sink while we worked.) 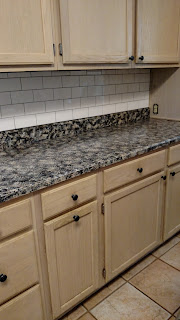 (All done! I was skeptical about there being so much tile on the walls.  I liked the concept of the backsplash behind the sink - as the wall often got dirty from the sink - but didn't think it would look good on the whole wall.  Boy was I wrong.  I LOVE the tile!) 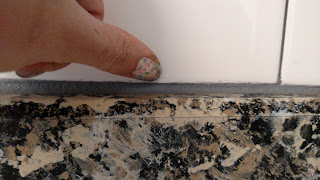 (I used a caulking gun - with grout caulk - to fill in the space between the counter and bottom tile and edges of the tiled area.  It took me forever because I am a perfectionist.  I used my finger to scrape a straight line along the tile.  My fingers were very sore from all the scraping.)

With the counters done and the tile up, we were able to start clearing up all the paper and use the counters again!  Steve then switched gears to the lighting issues.  He hated the fluorescent box lights and wanted to change them to something more "sophisticated".  I personally didn't care.  I just wanted to be able to see when I'm in there!  He found some school house lights on Amazon and ordered them.  We decided to gamble and take down the old lights and install them.  We weren't sure if the school house lights would provide enough lighting.  In the end, they did, and we loved them!  Only issue we have is that there are 2 light switches.  The switches operated the lights separately.  Steve decided to rewire 1 so that both lights worked together.  Here's the issue though -- the other switch only operates the 1 light.  So it can get confusing which switch to use at which time. 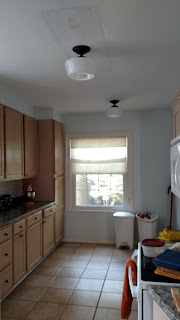 (School house lights!  You can see the area on the ceiling where the box light used to be.  We bought ceiling paint to try to mask that area, but I haven't gotten the courage to paint it.  I'm afraid the paint won't match and I'll have to paint the whole ceiling -- I'm not looking forward to that!) 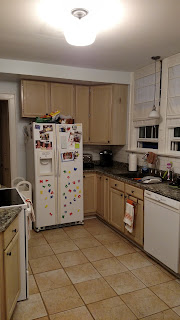 (School light in action. It actually lights the space really well.  I'm mostly in the kitchen in the morning and in the late afternoon.  Our kitchen faces the west and the sun shines in nicely in the windows.  So the lights on the ceiling just add light from above (and of course at night when the sun is gone!).)

We had plans of getting a matching drop down school house light to hang over the sink.  We ordered it and discovered when it showed up, that it was a big one -- the same size as the lights we installed on the ceiling! So we scrapped the matching light idea and hit up our local hardware stores in search of a small light.  We found we liked and fell in love with the Edison bulb look.  It doesn't match the other lights, but we still love it! 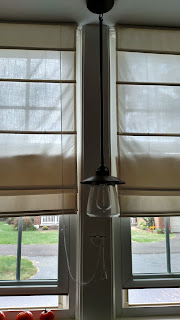 (Over the sink light.  We really don't use this light often - we didn't the old one either.  I just don't think about needing light over the sink.  But I love the look it adds to the kitchen.) 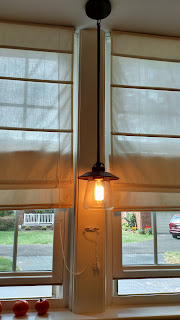 (Who can't resist an Edison bulb?!  Don't know what I'm talking about - google it! It just looks like the old fashioned light that Edison created. Just adds a little touch of a classic look.)
Posted by Unknown at 2:52 PM