Once we decided we were going to do the remodel, we purchased the countertop kit (Giani Granite) via Amazon.  The kit involved painting a primer, painting the colors, and then putting on clear coats to seal the counter.  Each step had to set for about 4hours.  We did the math and figured out we could knock the counters out in 1 weekend but would need help with Bean (and could use help on the counters, too!).  So we enlisted the help of my parents!

My mom had actually been at our house earlier in the week.  Steve, Bean, and I had gone into IN the wekeend before to visit their county fair & go to an air show my dad was working at.  Steve came back to OH on Sunday night and my mom brought Bean/I back on Wednesday.  She stayed the night and headed back to IN on Thursday.  As she was about to leave, she was talking with Bean and Bean acted like she wanted to go with my mom.  So we went with it.  I quickly packed a bag and she got right in the car with my mom.  They waved goodbye and off they went!  I had a 24 hour kid-free window to get all my prep work done!

I was able to clean the counters really well with Brillo pads; tape paper up over the counters; and move everything off the counters and set the kitchen up for all the work.  Steve got home from work a little early and took the sink out -- no turning back! I had made dinner earlier in the day and had it warming in the oven, awaiting my parents and Bean to arrive! Once they arrived, we ate dinner (on paper plates for easy clean up!) and quickly got to work.  Mom did the bedtime routine with Bean while dad, Steve and I busted out the counter kit and did step 1 -- priming! 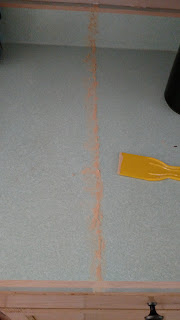 (Part of the prep work was to fill in all the seams with wood filler and sand for an even finish.) 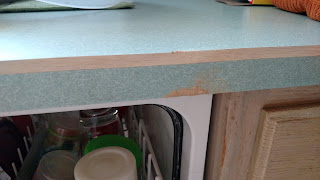 (There were some dents in the edges of the counters that we fixed with the filler, too!) 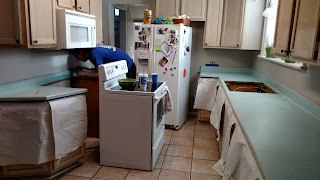 (There was some silicone seal around the top of the coutners behind the stove.  Steve took a razor edge and got it off while I finished up cleaning the counters.) 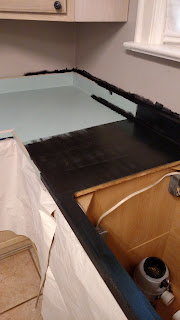 (We opted not to put tape up along the walls.  We knew we were going to tile so we didn't care if paint got on the wall.  The primer was black and the base color for the countertop.  We had to let the primer dry 8 hours before doing the colors; so that's why we chose to put this on Friday night and do the color layers on Saturday.) 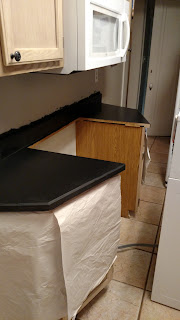 (All primed and ready to go! Let me just tell you how difficult it is to use a kitchen without it's counters and the stove and fridge in the middle.  It's ridiculously hard!)

We got to work on painting the "minerals" on the counters on Saturday morning.  There were 3 colors (in addition to the black primer) that was to be painted on the counters.  The kit came with some black paper that you could practice on so that you could figure out your desired look.  We decided that each of us (dad/Steve/I -- mom was still on Bean duty) would take 1 color and paint it on.  Then we'd each go one right after the other and paint (no need to wait in between colors).  After practicing a couple times with the sponges on the paper, we decided to go for it! 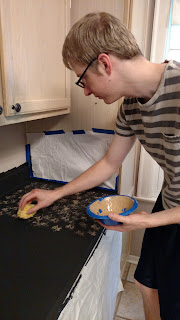 (Steve took on the first color.  We stared him down as he painted.  My dad took on color 2, and then I'd do the final little details with color 3.  Color 1 was darkest - 3 was lightest.  I wanted the counters to be a little darker, so we didn't do much of #3.) 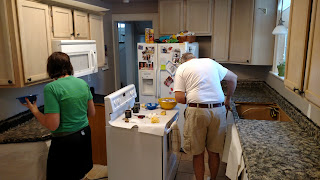 (Color 2 was my favorite so I told my dad to be heavy handed! Steve decided to smoke some pork for us for dinner.  So he had to go do a bunch with the smoker.  I took over the #1 color.  We liked to have a couple of feet inbetween us as we worked.) 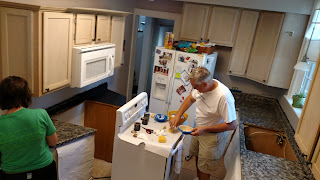 (The hardest part was to be consistent.  Since you sort of worked in sections as you passed down along the counter.  You also had to make sure you left room for the next color, but not too much room!  We finally got in a flow and made a lot of progress.) 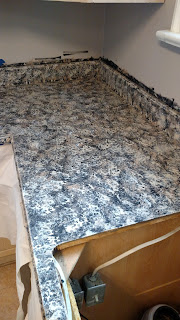 (The hardest part was to get the cracks where the back of the counter and top of the counter met.  If you weren't careful, you'd end up with a smear/blotch from the sponge.  We had little brushes for the fine details.  The back corner -seen above - was the hardest space because you had to reach and put your head under the cabinet. Ha!) 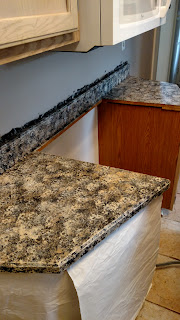 (The final look! We did just a little bit of the white color to make it shine in certain spots)

Once you got all the mineral colors on, you had to wait 4 hours before you started with the clear coats.  We decided there was no rush to get the clear coat on Saturday, since there wouldn't be enough time to get all the coats done in 1 day.  I didn't want to start on the clear coats, clean up the mess, just to pull it back out and use again the next day.  So we called it an early work day, enjoyed delicious pulled pork, and spent some time with my parents! Steve & dad played some computer games while mom and I watched movies and "Jammed"!

We went straight back to work on Sunday morning.  My dad did the first clear coat.  They stuck around for a little bit and had to leave after lunch.  Steve got some input on dad over some of the next steps in the kitchen remodel before they left.  I put the second coat on during Bean's nap and the 3rd & last coat on after she went to bed! 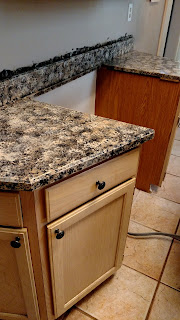 (All shiny after the clear coats! Now to let it cure and not use for a few days.  We decided to wait about a week before we'd put anything on it.  You aren't supposed to use any chemical cleaners on the counter.  I have a norwex cloth I use on it or just some mild dish soap.) 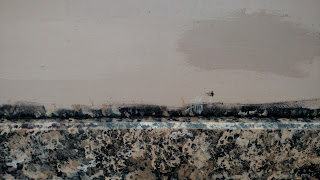 ("When did the Ackermans get granite??" -- joke of the weekend.) 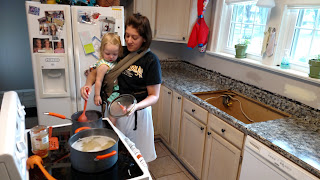 (We did easy meals for a few days and got some meals out.  But one can only go so long without a homecooked meal - especially when I do a homecooked meal every day normally!  Bean was being especially needy -- probably from her going back with my mom and then me being focused on the kitchen -- and wanted me to hold her.  I had to make dinner and we compromised with the carrier.) 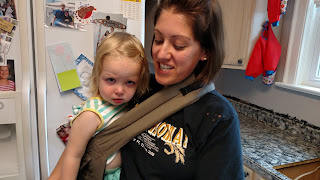 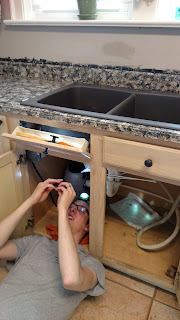 (Steve waited a week before installing the NEW sink.  Go big or go home, right?!  We got a new granite composite sink in "espresso".  I was hesitant to get the new sink.  I mean, we didn't NEED a new one.  The old one was sufficient.  But now I'm in love with it!) 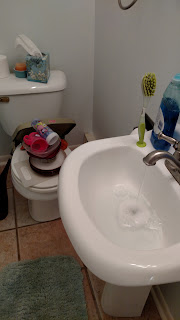 (Even with the sink in place after a week, there was some plumbing that needed to be re-worked.  I ended up going almost 2 weeks without a sink in the kitchen.  I had to hand wash all the dishes in either our bath tub or this little sink in the kitchen bathroom.  I don't know which one was worse -- the small space in the bathroom, or bending over the big tub.  Either way, I'm so thankful for my kitchen sink back!) 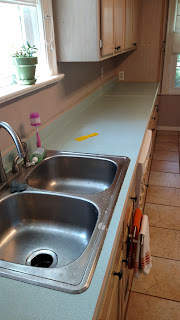 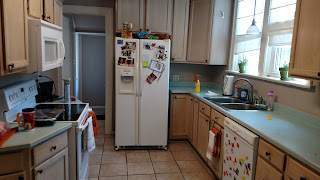 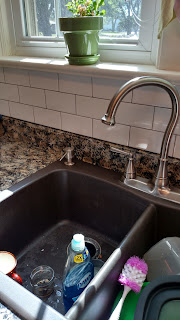 (Look at that sink! And those counters! We also changed out the faucet and added a soap pump. Go big or go home, remember!) 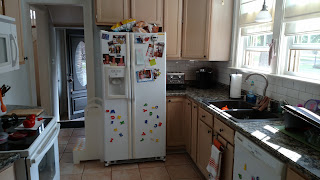 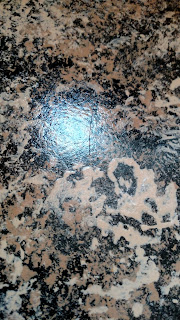 (So I don't even know if I should admit this, but we've already had 1 scratch in the counter.  I think Bean did it while "playing with water in the sink".  There was a fork ont he counter near the sink that I think she grabbed off and scraped the counter.  I did a little sanding and painted a couple coats of clear coat over it again.  Hopefully that'll work!  There's another spot on another counter that I'm not sure what happened.  It's got a sticky line of either something on it or the clear coat got messed up.  I'm currently pretending it doesn't exist.  I keep telling myself that there's really not much loss in the counters if the paint doesn't sustain our lifestyle.  It's better now than it was!)
Posted by Unknown at 3:27 PM