Last few weeks of my pregnancy were long, uncomfortable, and stressful (at times!).  I discovered that my doctor had a planned vacation the week before my due date.  I was pretty stressed over going into labor while he was gone, and of course I had a lot more time able contractions and a few nights of fearing a hospital run in the night.  We had a plan of what to do with Bean if something did happen in the night, but it still made me stressed at times.  I'm a planner and operate best when I know what to expect.  So once doctor offered me an induction date, I took it!  We knew by the end of June 14th, we'd be holding Sprout!

Actually having a date made it more nerve wrecking (so much to get done!) and less stressful (I can actually make plans and be prepared).  But then there's the whole, I still could go at any minute.  I focused on the date on the calendar and tried to soak up as much time with Steve and Bean as our last week as a family of 3.  Bean could tell change was around the corner and definitely craved (and appreciated) the extra attention.

My last two weeks of pregnancy stats:
*Baby dropped, meaning my pelvis hurts more and I have a nice waddle.  Sleeping is a bigger issue due to the pelvis pain since I can only sleep on my sides. But with baby dropping, I don't get up to pee as much. So you win some, you lose some.
*Lots of tightenings/contractions happening. They usually occur at night, but have woken up with some in the morning a couple days.
*Bending over is extremely difficult. Unfortunately, Bean requires me to bend over a lot. . .
*Progress kind of stalled around 2.5 - 3cm
*Pretty emotional about another kid - more so about the adjustment Bean will be going through
*Eating LOTS of chocolate
*Pretty set on a 1st name, waffling on the middle name
*I finished up final projects for baby and random things that have been piling up around the house. 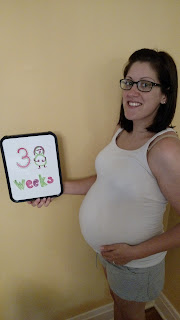 I tried to soak up lots of time with Bean -- story time at the library, intentional play time with her (which was mostly with a Mickey/Minnie doll and I got tired of acting out the same scenario all the time), lots of cuddles and snuggles in her bed and on the couch, and special treats (i.e. ice cream, suckers, and of course - chocolate!). 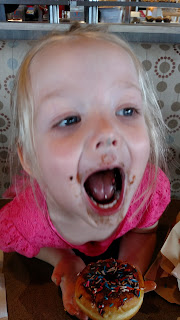 (We went on a donut date after storytime at the library.  Even though it was lunch time by the time we got out of the library and to the donut shop, but the sugar high was totally worth it.) 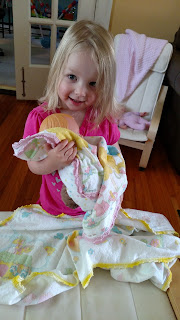 (My grandma has been working on making up some receiving blankets for Sprout and made a couple special blankets for Bean.  She's been using them to practice holding and playing baby with them.  And by playing baby, I mean she lays on my lap, puts the blanket over her, cries for milk, and makes me feed milk to her in her sippy cup like you would a baby with a bottle.) 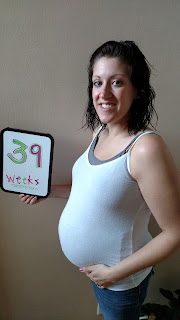 (LAST pregnancy photo just a few days before induction day! Boy am I thankful it isn't a "41" on that board like I had with Bean!)
Posted by Unknown at 9:09 PM