Induction was set for Tuesday June 14th.  Since I was to be at the hospital by 5:30 am, my parents came in the night before so that they could stay and watch Bean at our house while we were in the hospital.  I was induced with Bean and knew what the day/process would look like.  This time was a different experience in that Steve and I were at it all alone.  Last time, my parents were able to go to the hospital with us and provided distractions.  We had to come up with those on our own this time.

Ironically, I woke up a little after 4 having some contractions.  I'd been having them off and on all week, but never any that would wake me up.  The word for the whole day was "surreal". It was surreal to think about the fact that I wouldn't have to worry about going into labor or when baby would be coming -- she was coming today!

I woke Steve up just after 5 am, got everything pulled together, and made the 3 minute drive to the hospital (sorry Steve that I haven't let you fulfill your dream of a mad dash of driving to the hospital with a wife in labor).  Once we were there, we went to labor and delivery, checked in, and got the show on the road.

The first hour int he hospital is just spent going through paperwork (I had pre-registered, so really it was a nurse on a computer verifying everything), prepping the room, and starting an IV.  The nurse started me on pitocin a little after 7 and marked my beginning progress at 4cm & 80% effaced.  I could feel the contractions, but they were pretty similar to what I had been experiencing.  They weren't "painful", but did get annoying.  I had already "ordered" my epidural, but told the nurse I didn't want it until after the doctor came in and broke my water.

I watched the Today show while Steve read a book and nodded off and on.  The contractions picked up a little bit (nothing I couldn't handle), but the nurse did offer to get me that epidural sooner - I declined.  Our pastor came in and prayed with us right before the doctor came in.  Once the pastor left, it was time to get things really going.  My water was broken just before 9am and the anesthesiologist immediately followed with the epidural.  I did have a couple of strong contractions during that time.  Steve told me later he had concern for me and could tell I wasn't "just ok".  I felt the epidural go in and could tell it was more on the right side than the left.  That wasn't an issue. . . until later. 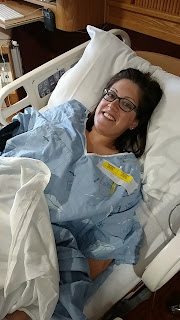 (Feeling much better after the epidural!) 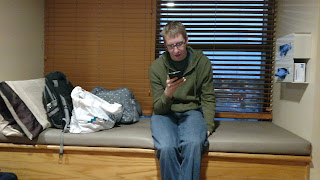 (Steve on his "perch".  He would alternate between this window bench, a recliner, and my side -- he'd help in the changing positions and feeding me ice.)

The epidural kicked in and I was feeling much more comfortable.  Well, contractions were more comfortable, but laying in the bed was not so much comfortable.  I just continued to watch tv and doze off and on all morning.  The nurse did a good job of coming in every 45-60 min or so and helping me to change positions.  Each time she would have me change positions, she'd check me.  At the first check at 10:30, I was only at a 5.  My heart kind of sank at that number.  I had Bean by 1:20 and had a goal of a noon baby.  I wanted a baby by lunch time because I was STARVING.  I don't remember that with Bean.  The ice chips this time around weren't cutting it. 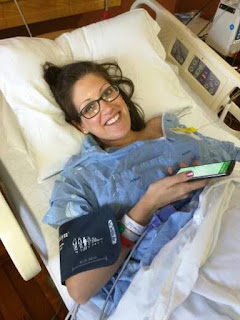 (Watching TV & playing on my phone -- I had plans of trying to blog, but with the IV in my left hand, I couldn't use it.)

At the 11:30 check, I was at 7cm.  Woohoo! Now that's better.  But again, my dream of a noon baby was dashed. I went back to whining about how hungry I was.  I got checked at noon and was still at 7, nurse commented on how she was going to come in more often to change the positions so that the baby would come down.  I turned on SVU to pass the next hour.  With Bean's labor, I didn't feel a single thing once I had the epidural.  This time around, if I was laying on my left side, I could feel more (remember that whole "the epidural was stronger on the right side comment"??) of the contractions.  They weren't painful, but present. My contractions also started to become a little inconsistent.  The nurse upped the pitocin to try to get the contractions to be closer together and consistent again.

At 12:55, I had been laying on my right side (and not feeling much).  The nurse came in and checked and said I was at 9! (I started to hope for a baby by 2pm!) She had me flip over to my left side and said she'd start to ready some things and come back shortly to check progress. By 1pm, I was starting to really feel uncomfortable.  I could feel immense pressure with the contractions and was starting to lose it.  I hit my button for an epidural boost and asked Steve if I was a crazy person to call the nurse right back in.  He said to do whatever I needed (however, he didn't confirm that I wasn't being crazy). I tried to tough it through another contraction, but hit the nurse call button.  She came right into the room as I did it.  There was a nurse on the intercom asking what was needed and my nurse responded with, "just hold on a second."  She then checked me and informed the other nurse that, "We need the doctor and delivery team NOW!" (Okay, she didn't yell "now", but her face kind of enforced that word.

It was a flurry of activity for the next few minutes.  I had immense pressure and the urge to push, but the nurse just told me to wait for the doctor.  She got the bed ready and put the stirrups up - with the disclaimer of, "don't put your legs up until the doctor is in here!" The doctor came into the room and the nurse told him - "baby is right here!"

I put my legs up and was told that the next time I felt pressure to go ahead and push.  A contraction started and they both looked at me and said, "now might be a good time to try." I felt the pressure and pushed!  I could feel the relief in my stomach as the baby came out.  Doctor had me stop so he could clean out her mouth (she was immediately crying!).  He was going to have me push again to get the body out, but her hand came out and body just slid out after it all on its own.  Steve and I were sort of in shock since it just took 1 push (as opposed to the 45 min with Bean!).

Sprout came into this world at 1:15 pm (that's right, only 20 min from that 9 cm check to baby being born!) weighing a small 6 pounds, 7 ounces & a long 20"! She was immediately laid on my chest, which (not gonna lie) grossed me out a little.  With Bean, they put her on my gown, but then took her and weighed/cleaned her up and then brought her back to me to do skin-to-skin.  Not this time.  She was placed right on my skin under my gown right upon coming out.  I got slimed on my face and that was about enough for me. Haha!  Doctor knew not to ask Steve to cut the umbilical chord, so I did it (I did it with Bean, too!). 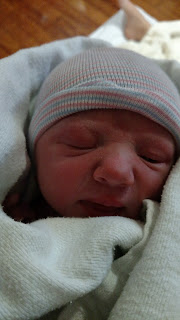 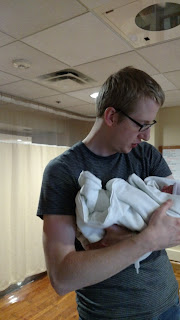 (Daddy getting to hold Sprout for the first time.)

We got to stay in the delivery room for a little over an hour.  I was stitched up, the room was cleaned up, and it was just Steve, Me, and Sprout. Can I just say SURREAL, again?!  A nurse came in a little bit later to get Sprout's vitals and stats.  At that point, we had her sent to the nursery to get cleaned up and I was transferred to my recovery room.  All in all, the day went just about the same as it did with Bean's, only with a little more excitement in the end.

My parents brought Bean up to meet her new baby sister later in the afternoon.  Other visitors included our pastor and his wife and my friend Sara (and another pastor and his wife along with a church visitor the next day).  Days in the hospital seemed to run all together.  The hospital experience was much more streamlined this time around.  Sprout and I would share the same nurse, meaning 1 nurse would come in and check both of our vitals at the same time.  That eliminated a lot of in & out of staff!  Sprout slept most of the first day, and I would have to work to nurse her every 4 hours.  At night, she cried and needed much more attention.  During the day, Steve would head back to our house for a few hours and my mom would come and stay with me. 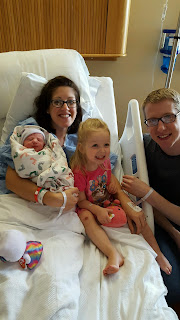 (First picture as a family of 4!  Bean LOVES baby sister -- although she still is convinced the baby's name is "Noah" after a baby from church.) 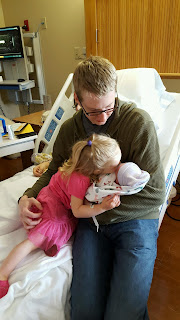 (This is how we usually find Bean.  In Sprout's face giving her kisses.  She LOVES her baby sister.) 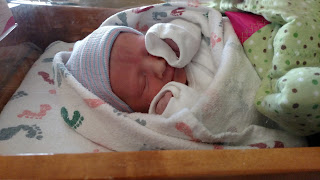 (Sprout likes to keep her hands up to her face, whether sleeping or eating or chilling around.  Although right now, she mostly just eats and sleeps.) 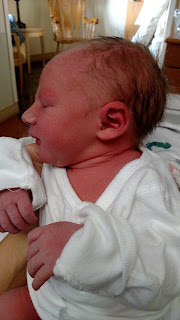 (Check out that hair! They say that heartburn is an indication of a baby having hair.  It's been true for both of my kiddos so far! Her profile also shows off that she definitely has Steve's nose!) 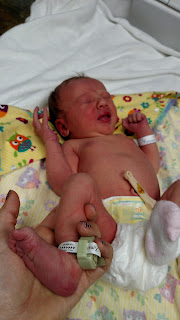 (Sprout has ginormous feet -- and I say that completely out of love. She also has very long fingers.  I'm guessing she's going to get her daddy's height!) 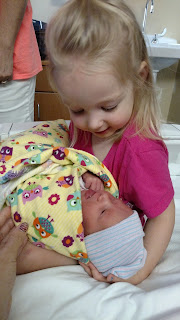 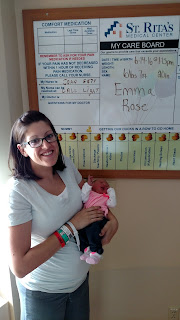 (It's hard to tell in the photo, but the bottom of the board in our room had a list of things that needed done before we could leave the hospital.  When you got that item checked off (i.e. "blood work"), you put a duck magnet above the item.  Once your "ducks were in a row" you got to leave.  We were discharged on Thursday and was home shortly after lunch.  My mom stayed a few extra days to help us acclimate to being home with TWO kids.)