Fall is by far my FAVORITE time of year.  The air is turning cooler, I get to snuggle under blankets, light candles, bake pumpkiny and appley items.  Although, I do love winter -- Christmas music, Christmas lights, snow, warm furry boots, scarves, more snow, hmmm. . . okay maybe fall isn't my FAVORITE, but for the sake of this post, we'll say it is.

October snuck up on us, and November is just around the corner.  Here are some random pictures for the fall this far: 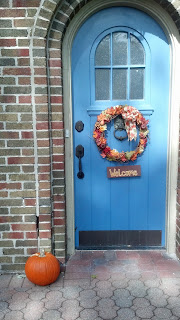 (Our door is still very blue, but we're pretty used to it.  The decorations really help it out, too!  We bought the pumpkin at Menards, but apparently the squirrels really like it because they've taken a chunk out of the top.) 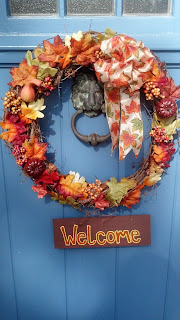 (I made this wreath on a challenge from Steve.  He didn't think I could make one for cheaper than what you could buy one for -- I proved him wrong :).  I'm not happy that I proved him wrong (okay, I do like being right!), but I'm happy that it was cheap & made all by myself.  I only inquired 1 burn from the glue gun in the process.  And thanks mom for my bow-making skills.) 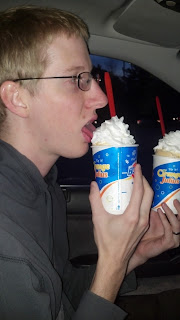 (Dairy Queen Pumpkin Pie Blizzards -- I'm more of a ChocoCherry Love kind of girl, but Steve loves PPB's.  With a BOGO deal, we got these two beauties for under $4.  I only ate about a 1/3 of mine, leaving Steve to indulge in this October only special.) 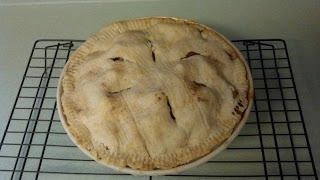 (MMMmmm, probably one of the BEST pies I've ever had -- and probably the BEST apple pie I've ever had.  Thanks to Sarah Cardinal, I now own a family recipe that is amazing.  I have also made a couple of pumpkin pies so far this year, but they weren't picture worthy (I just follow the recipe on the back of the can).  But this pie, I made the crust, sliced the apples, and assembled all by myself.  I was pretty proud of it.)