Ever since the garage roof was damaged, Steve has been researching slate roofs, gathering tools, and scheming how he was going to get it accomplished.  But before the roof could be fixed, we had to find some slate.  After months of researching on Craigslist and contacting people to get measurements, we finally found some slate that was the right size for our roof.  So one day, Steve and I went on an adventure and drove to a farm on the outskirts of Columbus to get the slate.  As we approached the farm, it was a complete set-up for one of those horror movies where the couple is never heard of again (roaming chickens included), but luckily this was a legit place and we survived with 50 pieces of slate in hand.

So a few months ago, Steve was able to replace some of the lower slate on the roof.  He would just stand on the ladder and could fix the places he could reach.  However, he could only fix about 3 pieces and had about 4 left but were too high to reach.


These next pictures are from over the summer.  I thought I'd posted about this part earlier, but didn't so for the completion to make sense, I had to add in this section out of date: 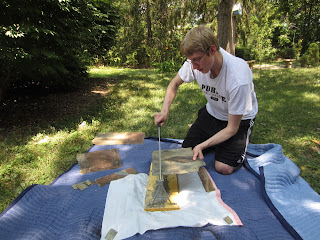 (The slate that we got from Columubus was bigger than the tiles on our roof.   So Steve had to buy a slate cutter in order to cut the pieces to the right size.) 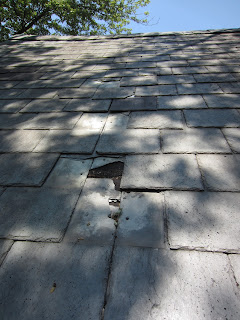 (Here is an upclose shot of the damage.  You can see some of the wood poking through from under the damaged section.  Steve had to cut pieces of flashing to cover the wood before he laid slate over it.) 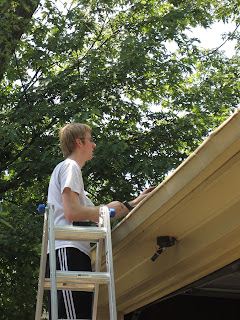 (Steve working on the rows he could reach by the ladder.) 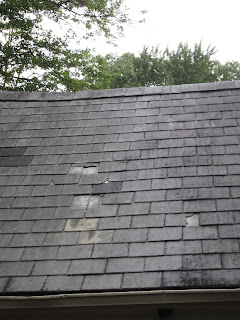 (Here you can see the 2 pieces he replaced on rows 4&5 via a ladder.  The slate was lighter than the others, which drove me crazy.  The color of the slate is dependent on the area it was mined.) 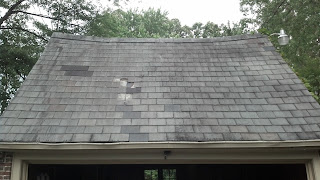 (So we came up with a solution to the lighter tiles -- spray paint them!  This is how our garage looked for the majority of the summer up until this past weekend.  You can now see the tiles towards the bottom that were darkened with the paint (the dark patch up to the left was done by previous owners).  We tried several different was to extend the ladder for Steve to fix the upper tiles, but nothing worked.)

He did some research and decided his best option was to by hooks that would attach to a ladder and then hang the ladder over the top of the garage.  I hated this option but made a compromise -- as long as someone else was here to help him (and take him to the ER when things went wrong), he could by the hooks and attempt the process. With his parents coming for the weekend, and a great weather forecast, Steve seized the opportunity and convinced his dad to help out. 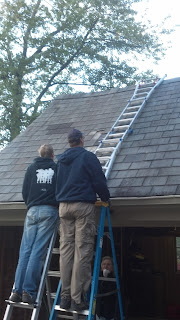 (Getting the "hook ladder" on the roof was quite the challenge.  There are wheels on one side of the ladder, that help you push it up to the top of the roof.  Then you have to flip the ladder so the hooks catch.  The ladder was pretty heavy and it didn't just roll straight up like we planned, and it ended up being over the damaged section.  Then Doug & Steve had to shimmy the ladder over.  A couple of tiles up at the top got cracked, but hopefully they won't break all the way off :-/.) 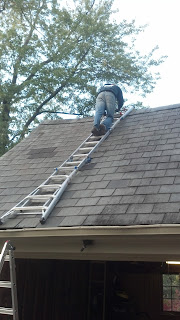 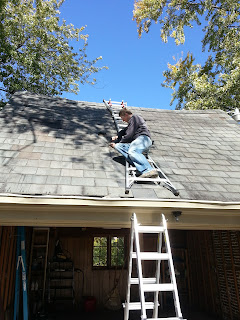 (Even though the rule was that someone else was supposed to help him out, I did end up being his spotter and handing him tools as he needed them.  Once he was up there, he realized that there was more damage than he thought, and that a lot more wood was exposed.  He did a pretty great job of covering all the wood and putting in the new tiles.) 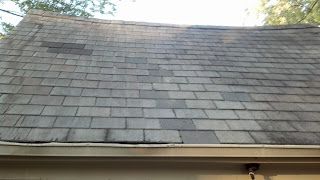 (Our garage roof is finally fixed!!  What a HUGE check mark off that list!  Steve agrees that the extra help was needed in getting the ladder on and off the roof.  He now thinks he can fix some tiles on the top of our 3 story house, but Doug had my back and put a ca-bosh on that idea -- thanks Doug!)


In Steve's words -- roofers have a very dangerous and tiring job.  He definitely underestimated the job, but is thrilled that it was a success.  We also learned a lot from the whole process and know how to do it easier the next time.  (Hopefully there won't be a next time anytime soon!)
Posted by Unknown at 11:40 AM