I know it's in the middle of January, but I just realized not only has the blog been neglected, but I also never posted about Christmas.

We changed up Christmas this year and stayed local.  Usually we fly out to New Jersey to visit Steve's grandparents and family, but we decided to stay home (especially since we had flown out to Jersey in the summer).  We spent the weekend before Christmas at my parents' house.  All of my siblings (and them some) were able to get together and celebrate our family Christmas together.  We changed things up with my family and opened/exchanged gifts before lunch!  Usually, we don't even get together until later in the afternoon, but we went crazy this year.

We cut our stay in Indiana a day short so that we could make it to Cincinnati before a huge winter storm was scheduled to hit!  We made it to Steve's sister's house just before the snow started.  Cincinnati only got a couple of inches, but my parents ended up with over 8 inches!  Good thing we left early :).

We celebrated a little Ackerman sibling Christmas (his parents were celebrating Christmas in New Zealand!) while in Cincinnati.  Even Steve's brother came to visit from California!  While we were all together, we had a great Christmas dinner (great job Ash!), exchanged gifts, went shopping, went to see movies (guys went to Django, girls to Les Miserables), played a crazy game (Ticket to Ride), and bonded over family coins.

Steve's grandparents were avid coin collectors and made a collection for each grandchild.  When his grandparents passed away, all the coins got taken to Cincinnati to be gone through and decided what to do with them.  They've been there for over a year, but this was the first time that all the siblings would be able to go through the together.  So in preparation for the siblings arrival, Ash's husband Scott made the coins his own personal project.  He bought several coin books, and even took some time off to go through them!

It was ridiculous the amount of coins that had been collected over the years!  Each grandchild had their own set of yearly box set coins.  There were also silver dollars, American Eagle coins, and so many more I can't even remember them all.  We spent almost an entire day going through everything, figuring out what we wanted to save, and what should just be sold.  Once everything was sorted, some stuff was taking to the bank to be exchanged, some was taken to a coin dealer to be assessed, and the rest was taking to Scott's new favorite spot -- CoinStar. 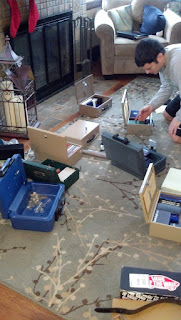 (Scott going through each box set by year, I'd record them down, while Steve -- not picture -- would look up the price in the book.  I think by this time, Ian and Ashley had checked out of the process.) 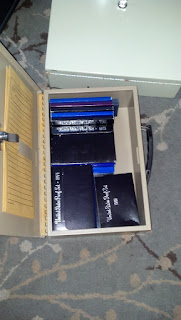 (Just 1 of the dozen lock boxes full of coin sets.) 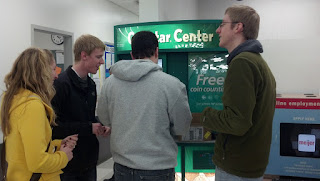 (Way too much enjoyment was had at this CoinStar kiosk.  Everyone took their turn putting coins in the tray, but I think Scott got the biggest jollies out of it.  The highlight of the process was the machine rejecting all the "steelies" -- 1943 steel pennies.  The machine would get confused and would reject a lot of regular pennies mixed in with the steelies.  Scott wouldn't give up on the machine and would constantly add back the rejected pennies.  Ashley finally had to intercede and stop the process, deeming the remaining $0.50 not worth it.  Hahahaha.)

Maybe we should make CoinStar kiosks a new Ackerman Christmas tradition???
Posted by Unknown at 6:53 PM