It's the eve of our big Disney trip (that's right folks. . . we're going to Disney World!), our bags were packed yesterday, the house is all put together for our absence, and here I thought I'd have Friday to hang out with a friend and do whatever I wanted.  Wrong!

Good thing I was ahead of the game this week.  I had planned to do laundry for Thursday and Friday but had decided to do it earlier in the week, good thing because of what happened today.  I had just a few more loads to do (not really necessity, I just like to come home to fresh sheets and towels).  While the washer was draining, the sump pump kicked on per its normal habit. However, this time was different.  It sounded strained and unusual.  Then it was followed by a crash of gushing water.  Yikes!

I ran downstrais to check out what was going on, and lo & behold, water all over the ground in the sump pump closet.  Oh no!  After I finished panicking, I called Steve (I also stopped the washer!).  He talked me through where the wet vac was located and what I needed to do.  He also suggested checking out the circuit breaker & one of the breakers had been flipped.  So I pushed it back into position, but nothing happened.  Then I got the vacuum and sucked up the water, although a lot of it had drained back down.  I then turned to my dad form some more advice!  He talked me through all the possibilities of what happened and what would be needed to fix it.

While talking with him, I ran some water to see if the sump pump had in fact burnt out or if it were still working.  I heard it kick on and then saw a geyser of water shooting out.  Even though I wanted to run from the water, my dad told me I had to look and figure out where it was coming from.  I figured out it was coming out of a rubber seal on the pipe!

So this is what we're thinking -- it would appear there is some sort of blockage in the pipe that the sump pump shoots the water out of the house through.  The pipe is underground and comes out of a hill into our yard.  We're guessing that water in the pipe is most likely frozen and is building up water pressure in the pipe, which is why it's shooting out of the seal.  Especially since this past week has been the coldest weather we've experienced while living in this house.  I went outside and looked into the pipe, but couldn't see anything.

We're not sure what the next step is (other than stopping laundry and all other water in the house).  Our plumbing is messed up to begin with and we're pretty sure everything except for the toilets runs through the sump pump. On the good side, we're gonna be gone and won't be running water.  On the bad side, we're oging to be gone. Ha ha.  Hopefully, we can figure it out tonight and will feel content while we're gone.  Good thing we have good friends who are watching the house for us ;-).  Now instead of just being concerned about feeding Ramses, they'll have to make sure he doesn't go swimming either ;-)!! 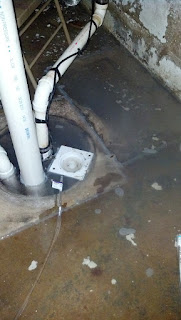 (Yuck, look at the water backup!  There was only about a 1/2" of water above that plexi-glass covering/floor.  Believe me, it didn't smell good either.  Which it should have smelled great since a lot of the water came form the washer!) 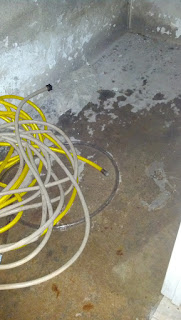 (Here you can see that all the dark is water and the light is dry cement. The pictures don't really do the water justice.  These pictures were also taken after some of the water went down the first time.) 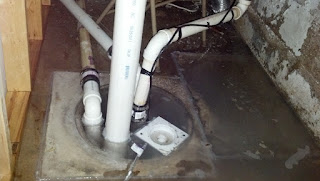 (So let me explain the situation:  The sump pump is attached to the pipe on the far right.  The black wire is the plug to the sump pump, it's taped to the pipe and then goes into the outlet on the back wall.  The pipe to the left is water coming from the washer.  The big pipe in the center is the radon pipe.   Before we bought the house, we had it tested for radon.  It tested positive so in order to buy the house, the previous owners had to have it fixed.  Whoever put in the radon emission system decided to put a plexi-glass seal over the entire hole in the ground. The white square on the right is a little opening to pour more water down/let air circulate. So to replace the sump pump -- which we thankfully don't have to do this time around -- we'd have to cut out pipes and peal off the plexi-glass cover.  Yikes!)
Posted by Unknown at 12:51 PM