For the past month, I've been elbow deep in a new project. When we bought the house, we realized we really lucked out in buying such an old house without wallpaper!  However, one day while debating where to start painting in an extra bedroom, I discovered that there was wallpaper on the wall, it had just been painted over. (I've also figured out a couple more rooms have hidden wallpaper -- I knew the house was too good to be true!)

So back to the wallpaper -- I was just going to ignore the wallpaper and just paint over it like the previous owners had done.  However, I noticed a little bubble in the paint, and before I knew it, I had peeled off a big chunk of the top layer.  I'm not quite sure why, but the top layer that had been painted, peeled right off!  Although, it revealed another layer underneath that appeared to be stuck on the wall pretty well. 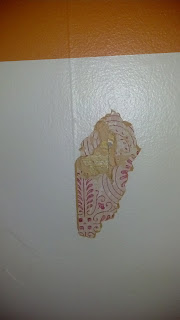 (All the paper removal started with a little paint bublle that I thought I could just "level out and spackle".  Ha ha, once I popped the bubble, this is what I saw -- at least 3 layers of wallpaper!) 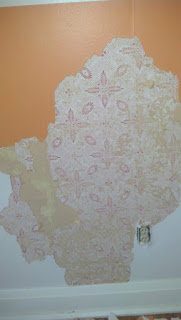 (Within minutes, I had this much of the top layer peeled off.  At this point, I was still debating if I should keep peeling the paper.  I had no idea what endeavor I was undertaking!) 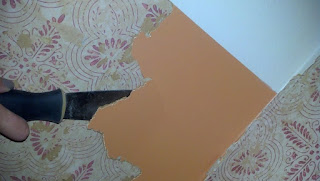 (With my little scraper, I was able to easily get under the first painted layer and peel it right off without any resistance!)

I had actually started this project before Christmas, and had gotten the whole top layer of wallpaper off within a couple days.  I returned back to wallpaper removal after the new year.  The next couple of layers proved much more difficult at removing.  I made a remover by mixing Downy fabric softener & warm water in a spray bottle.  The trick to the removal was saturating the paper with the concoction and stripping away each layer.  I'd spray an area, let it sit, remove some of the paper, resaturate it, go to a different section and spray, remove, resaturate, go back to the original area. . . and the process seemed to never end! 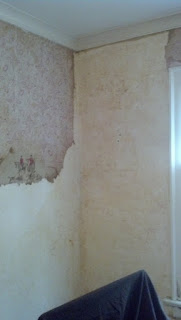 (Corner area with all the wallpaper gone -- the white is the plaster.  On the left, you can see 2 layers of the wallpaper -- the pink pattern and the horse scene were 2 different layers.) 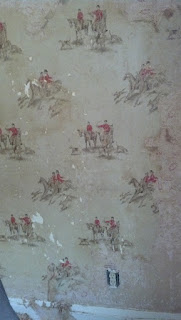 (I very carefully scraped away the pink layer to reveal a weird English horse/hound hunting scene.  Since this was the last layer, we assume it is the original wallpaper.  Although, only 1 wall had the hunting scene on it, while the other walls just had a subtle grainy paper that matched the hunting scene.) 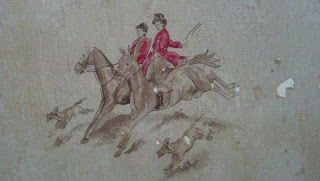 (Upclose of the hunting scene.  There were two poses -- this one with the two horses leaping. . . ) 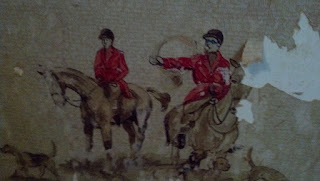 (And this scene of the two horses standing still and the one rider blowing a bugle horn.  Notice the bugle player has blue glasses on -- that is because someone drew the glasses on him!  Ha ha, I can just imagine the first little boy living in this room and getting in trouble over drawing on his wallpaper.)


After a couple of weeks on intensive work, the wallpaper was finally all stripped away.  I even got help with a close friend. Amber (not my sister, but new friend in Lima) came out a couple of days and helped remove wall paper and clean the walls!  It's amazing what people will do for you for some Chipotle ;-). 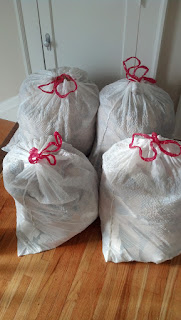 (I think there were a couple bags of the first layer of paper that got thrown away before Christmas.  But here's the 2nd, 3rd, and even 4th layers of paper.  I felt really bad taking off the original wallpaper.  Who knows, that horse paper could be worth millions!  I was able to save a couple of sections of the pink layer and horse layer.) 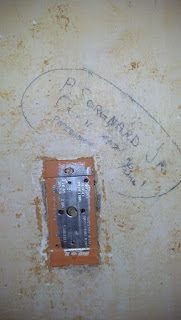 (We found this signature -- P. Sorgnard Jr. Oct 11, 1937 "Pierre" Paperhanger.  Underneath the last layer of paper.  We at first thought he was the original owner, but after doing a lot of research, we figured out that Pierre Sr. was a French immigrant.  He lived in the area and was an interior designer.) 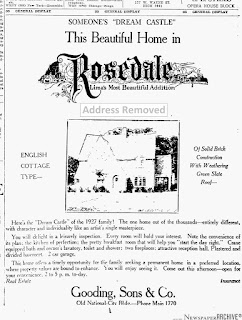 (We got intrigued and did some more research and discovered who the first owners were & we even found an original real estate advertisement for our house in a 1927 newspaper!  How cool is that?!  We've always been told -- as well as our paperwork -- that our house was built in 1935.  Nope -- definitely more like 1927!)

Ooops, I digressed.  Back to the wall paper removal.  Once all the wallpaper was removed, I've had to move onto step 2 -- wash the walls.  Not all the glue came off when I removed the paper, so I've had to wash each wall pretty vigorously in order to get all the residue off.  It's taken nearly an entire week of just wall washing. 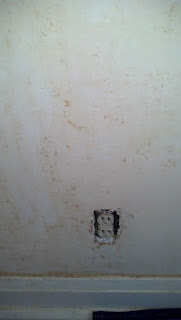 (All the brown specs are pieces of wallpaper and glue stuck on the wall.) 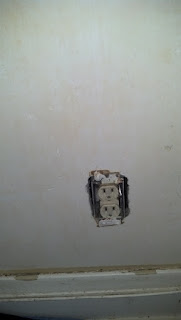 (After a vigorous cleaning, the plaster is back to being smooth and ready to be spackled/painted!)

I still have another wall to wash, and then it will be on to step #3 -- spackling & smoothing the walls!  I had high expectations to have this room done in a month, but I'm looking at it more realistically and expecting another month or two until the walls are painted and the trim is repainted.
Posted by Unknown at 1:00 PM