Steve comes up with a lot of crazy ideas. They generally go along the lines of odd do-it-yourself processes.  Most of the time, the research and planning portion take too long and nothing ever comes about; however, some times I'm caught off guard by random trips to Menard's resulting in jumping feet first into the crazy.

A couple weekends ago, Steve and I were at Menard's for some legit items, when the next thing I know, we're in the plumbing section buying plugs for our trees.  I thought Steve's tree-tapping-for-your-own-sap idea was just that, an idea.  However, now we're living the dream.  We currently have 3 tapped trees producing sap for our own enjoyment.

The whole process is an easy one, but it takes a lot of work and supervising.  Tapping the trees is the easy part.  The hard part is keeping the sap at the correct temperature until enough is collected to make syrup.  And then the syrup production is very time consuming.

The sap needs to be stabilized at a temperature around 37 degrees.  You can always freeze sap, but if it gets too warm it spoils and looses its sugar content. We don't have a freezer large enough for the 5 gallon bucket to fit into, so we've been relying on the cold temperature in our sun-room to keep the sap cool.

Lasst weekend, Steve's family came to visit.  The weather was warming up and we decided to turn what little sap we had into syrup (otherwise it would spoil).  Plus, Steve gave me some long excuse about needing to decide if making syrup is worth it and he had to prove that more trees needed tapped.  There's a 40-1 sap-syrup ration.  Meaning, if our 5 gallon bucket was full of sap, we'd get 2 cups of syrup once its processed.  Kind of ridiculous if you ask me, but this is not my endeavor.


The easy part of the process is the tapping itself.  All that is inovled is drilling a hole, inserting a tap that will allow the sap to flow out from the tree.  We use a simple system of attaching a milk jug directly onto the tap to collect the sap.  Each evening, Steve then dumps the jugs into a 5 gallon bucket to hold the sap until its processing time. 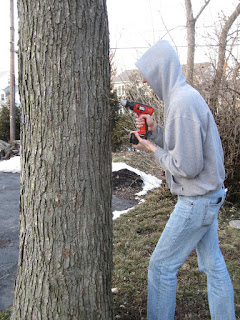 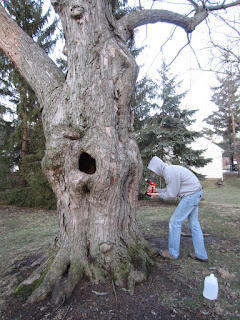 (Steve thought that his tree would be the money maker since its so large and well established.  Sadly, it didn't produce anything.  We decided to take the tap out and just leave this tree alone.) 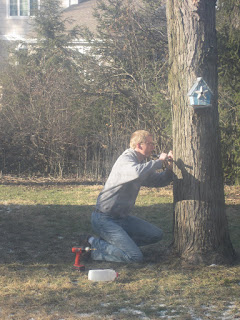 (This is the money maker.  This tree has so far has produced all the collected sap.  Last night, Steve picked another tree in the front yard -- despite my plea to keep this a secret from the neighbors -- in hopes of more sap production.) 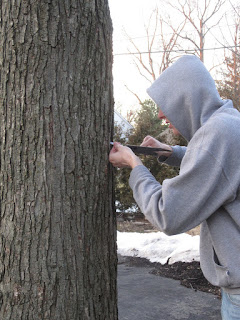 (After the whole is dripped, the tap is "tapped" into the tree -- ha ha) 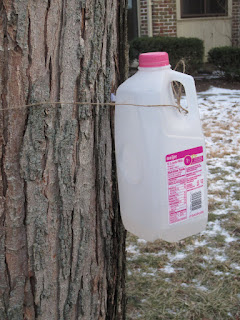 (Notice the snow on the ground and Steve bundled up as he drills.  Sap season isn't a set time frame, but all according to the weather.  The best time for sap production is when the temperatures fall below freezing at night, but rise above freezing during the day.  The sun seems to help a lot, too!  We were afraid that squirrels would bat at the jugs, so we tied them to the tree with twine.  However, the squirrels could care less, so the twine is long gone and the jugs just hang by themselves on the taps.) 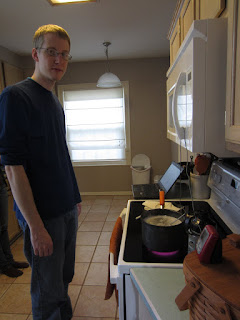 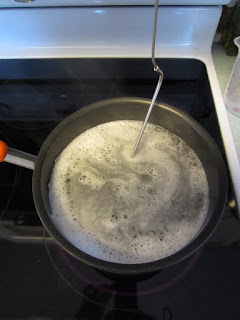 (We rigged up the thermometer to hang int the pot to get an accurate read.  I'm not really sure why the temperature was monitored, other than to make sure it was boiling correctly.  A scum/foam would form on the top of the sap that needed to be taken off periodically.  Stirring would occur once in awhile because the syrup would sink to the bottom.  There was round the clock supervision to make sure boiling and scum removal was happening.  The closer it got to syrup, the less supervision was needed. In the end, we ended up with less than a 1/2 cup of syrup.  Yum!!) 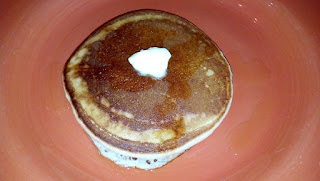 (This morning, we enjoyed pancakes with our own syrup!  The syrup needs to be filtered (we didn't have one) to get some of the wood pulp out.  We also could have boiled it a little longer to make the syrup thicker.  It passed the test to continue on in the sap collection! Mmmmmm!)
Posted by Unknown at 1:31 PM