A Weekend with the Ackermans

Steve's birthday conveniently corresponds with a 3 day weekend, allowing his family to come around that time to visit.  His parents flew in from Colorado and stayed with us from Friday to Monday.  His sister and her husband were able to drive up from Cincinnati and stay Sunday to Monday.  We had a house full and absolutely loved spending that time with his family!  We were just sad Ian couldn't come, but we managed a little skype session with him (although his camera didn't work, so really we just talked with him).

On Saturday, we headed to Wright Patterson Airforce Base Museum in Dayton with his parents and sister.  (She was in Lima due to work and returned back with her husband on Sunday).  It was very convenient for us that Dayton also houses a location of our favorite pizza spot -- Dewey's!  After enjoying our pizza, we headed to the museum.  I am horrible at remembering to take pictures, but his mom Trisha took a few at the museum: 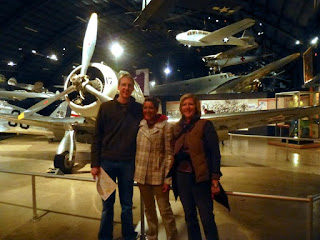 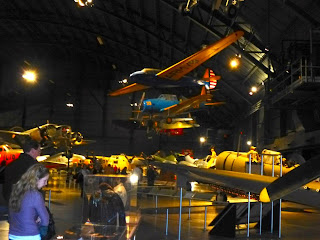 On Sunday, we started the day off with church, where I sang in the choir for the first time!  After church and a quick hardware stop (at Menard's of course), we headed back home to meet up with Scott & Ashley.  After lunch, the beginning of the various house projects were started.  First on the list was finishing sanding the de-wallpapered room.  With limited sanding blocks and respirators, somehow Scott, Trisha, and Steve drew the short straws.  Scott brought an oribital sander which really sped the process up.  The only downside to the whole project was the amount of dust that was created.  Two weeks after the fact and I'm still cleaning up white dust from all over the house!  Even with the door shut, you would not believe the amount of dust that settled throughout the ENTIRE house. 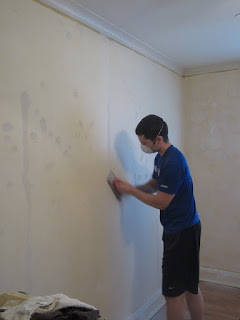 (Scott before pulling out the orbital sander.) 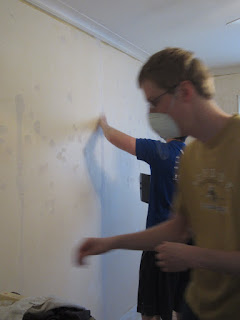 (Action shot -- safety first!  Those respirators were a definite need!) 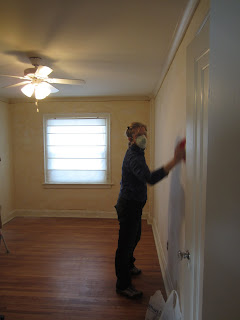 (Trisha was the ringleader behind this job and what a huge help it is to have it all done in one day -- especially since I didn't have to do it!) 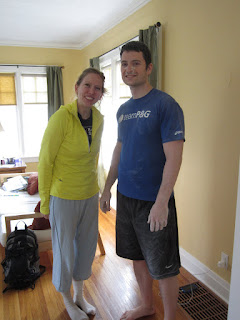 (Ashley was put on clean-up duty.  Motivation for her was the fact that her and Scott slept in that room that night!  Thanks Scott for your willingness to help!)

There was a brief intermission in the sanding project for Steve's soccer game!  That's right, Steve has been inovlved in an indoor soccer league with some of his co-workers.  Lucky for Steve, we had a packed cheering section just for him!  His team -- The Swedish Meatballs -- played the highest ranked team in the league.  His team didn't have any extra players to be subs, meaning they all had to run and play in the game constantly, they put in a valiant effort, but sadly lost despite Steve's goal! 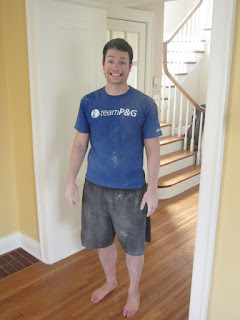 (When we got back, there was  alittle section left to sand and Scott finished it up.  It's hard to see, but that's not glare on the floor, that's a light dusting of white dust, which is still stuck in the cracks in the wood.)

After wrapping up the sanding project, and cleaning up the dust, we switched our attention to focus on the birthday boy!  We headed out to eat at Yamato Steakhouse -- a Japanese hibachi grill style restaurant where the chef cooks your food in front of you in an entertaining way.  After dinner, we went back home for Doug & Trisha's travel log of their Christmas trip to New Zealand.  Followed by ice cream cake & gifts for Steve! 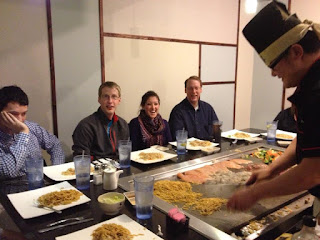 (Scott was obviously not amused by our chef's shenanigans.  Ha ha.  Highlights included a flaming onion volcano that doubled as a train, attempts to catch flying broccoli in our mouths, and being sprayed (or mostly threatened) with a questionable clear substance.)

Monday was spent with more various projects and enjoying our last day with the family.  Steve decided this would be the prime opportunity for our first sap to syrup conversion.  It was nice to have multiple people willing to rotate and take their turn watching the sap boil and skim the scum off the top.  While sap was boiling, handyman Scott went to work trying to figure out what was wrong with our chandelier (which randomly stopped working back in December). 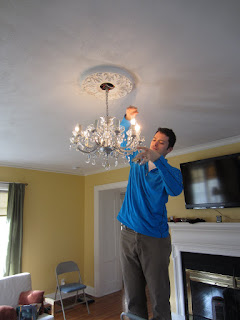 (I don't remember the order of things, as this was a good couple hour long process.  I do recall that this picture was taken after a vary large electrical arc nearly zapped Scott.  After turning the breaker on and off, covering up open wires, Scott finally realized that the chandelier worked.  Only problem was, it wouldn't shut off.  The remote and the receiver weren't reading each other.) 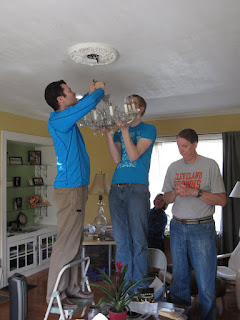 (Several theories were formed on how best to get the receiver down.  The receiver was stuck in the ceiling and the way it was in there, there wasn't enough room to just simply pull it out.  Scott wanted to go the route of hacking the mold off the ceiling, which sadly is foam and not plaster.  However to my dismay, he decided to go with the longer route of dismantling the entire chandelier, wiring and all. Eventually the receiver was able to come out.  Even though it was synced properly to the remote, it wouldn't work.  The verdict was that the receiver went bad and a new system was needed.  After another quick run to the hardware store, another 30 minutes of work, and Steve nearly falling off the chair, the new system was installed and the chandelier works again!!!  Yay!!  With all the work Scott has done in our house -- installed our tv, sanded walls, fixed our light, we owe him something BIG.  Just not sure what yet.  Ha ha) 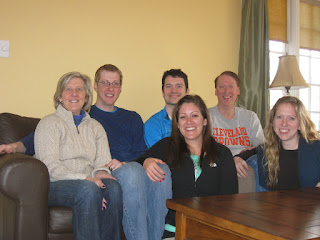 (We had a wonderful time with Steve's family!  We appreciate all the help they gave and the time we got to spend with them.  We're looking forward to the next family gathering!)
Posted by Unknown at 12:11 PM