Last week, Steve and I were in the most magical place on Earth -- Walt Disney World!  I grew up on Disney.  My family's love for Disney World all started when my oldest sister graduated high school in 1996 and we went to Disney as a family to celebrate.  Since then, it has become a yearly homage for my family (there were some years we couldn't due to weddings, and sometimes different siblings couldn't go).  Once Steve and I got married, my parents continued their yearly Disney trip kid free until the grandkids were old enough to go.  The last time I went to Disney was with my family in 2010, but Steve opted to stay back and work -- ha!

Steve tried his hardest to avoid a Willis family Disney trip, but finally gave in!  We went for 8 days with my parents, my sister Sara, my sister Amber, her husband Chris, and their three little girls -- Emily, Allie, & Gabbie!  My brother, his wife, and their daughter weren't able to go this time :-(.  So it wasn't a complete Willis family trip, maybe next time!

We had a great week while we were there and the weather was almost perfect!  There were a couple days in the late 70s, and a few in the late 50s, but it was way better than the 20 degree weather back home in Ohio!  Some days we'd get up early with the family and other days Steve and I would just relax in our room and have a slower morning.  It was nice to be able to meet up when we wanted and take off and be by ourselves, too.  It was also very helpful to have some matching shirts while on the trip.  There was only 2 days of everyone matching (and another day of just the girls), but it made it really nice to be able to spot people from far off since they had the same shirts we did on.

You'll have to wait for shots of the whole family.  Disney has a service that takes photos for you, and we ordered all the photos on a disc.  Until that disc comes in, I can't put them on the blog :-/.  So for now, you'll have to settle with the few photos I took myself. 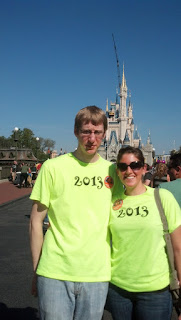 (Sunday Jan 27 -- our first full day at Magic Kingdom!  Just Steve and I had gone to Magic Kindgom the night before to do a couple of rides by ourselves.  We were shocked at how busy Disney was in January!  By Sunday night, we were sick of the crowds at Magic Kingdom and headed over to Epcot to see the nighttime show there.  It was a bit sunny, too.) 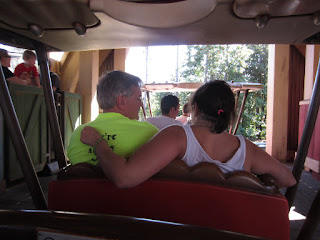 (On our first day at Magic Kingdom, we all did a family coaster together -- even the little girls!  We did a really small "kiddie coaster" called the Barnstormer.  Even though the ride is geared toward kids, the big kids rode it too -- see they fit!) 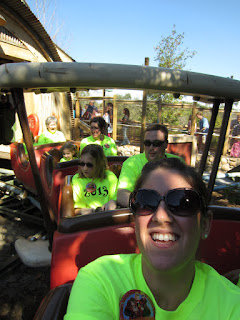 (I tried to get a view of everyone on the little coaster, sorry Steve -- ha ha! Oh yeah, and those buttons are "Family Reunion" buttons.  Cast members loved our matching shirts and told us to go get the buttons to "celebrate" our day.) 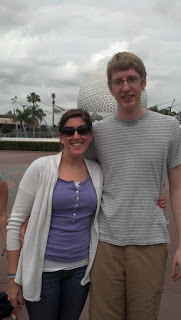 (Monday Jan 28 -- We headed with the family to Epcot, but no matching shirts this day!  The weather cooled off a little bit with the clouds, but the weather was still perfect!  In the evening, we went back over to Magic Kingdom to catch their night parade and fireworks.  Magic Kingdom only had their parade on certain nights, and this was our only opportunity to see it!) 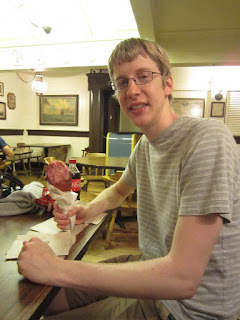 (Steve was all about getting a turkey leg, but no one else wanted one, except for my brother-in-law.  So the two guys went off in search of a turkey leg while the rest of us at fast food stop.  Once they found the legs, they came back with meat in hand.  Steve said it was juicy and rich and could only take out about half.) 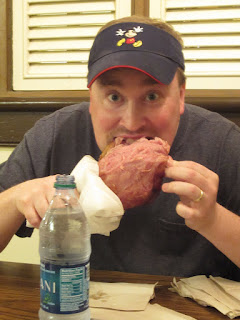 (Chris on the other hand saw the leg more of a challenge and got the whole thing down!  Although, after that night, we weren't allowed to speak of the turkey legs again.  Apparently one a trip is enough!)

On Tuesday, we stayed the whole day at Disney Hollywood Studies, this was our other all matching day.  But sadly, I don't have any pictures of those shirts.  We did the Star Wars ride, a couple of smaller shows/rides and then ate lunch with the family at the Sci Fi Dine In Theater.  After eating, we went on the Back Lot tour where my parents and myself volunteered to be part of the show (this is all on video, but I don't have copies yet to put on the blog).  We ended the night watching the famous Fantasmic Show! 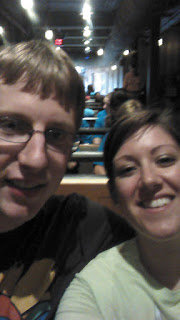 (On Wednesday, we headed back to Magic Kingdom.  This morning, the family went out first for the little girls to be made over into princesses.  Steve and I joined up later after their transformation was complete.  After we met up, the girls went off to get autographs and Steve & I went and rode Big Thunder Mountain together.  I'm a roller coaster fan, while Steve is not!  He was a trooper though and went on most of them with me!)

Thursday was spent at Animal Kingdom in the morning, a lunch at Rainforest Cafe, and a trip to Downtown Disney at night.  This is the last day where the girls had matching shirts :-(.  Even though Animal Kingdom is the most well themed park, it is not one of our favorite places.  It does have an intense coaster -- Expedition Everest and a cool animal safari, but that's about it (oh and Steve's dinosaur ride).  Everyone went on the coaster except for Sara, Gabbie & Steve, but not all at the same time.  I think Emily & Allie both went on it 3 times with different adults.  We all did the animal safari together, which was pretty neat this time!  A lot of the animals were out and even walked up close to the truck -- pretty cool!  Downtown Disney is a shopping/entertainment area that is free to get into.  So my sisters, mom and I went shopping, Dad & Steve went to an interactive technological place called DisneyQuest, while Chris stayed back at the resort with the kids.  DisneyQuest has a lot of simulator games (Chris gets motion sick and couldn't go) and dad and Steve had a good time (even though dad got motion sick on a few games).

Friday we started out at Disney Studios again in the morning and ended at Epcot in the evening.  Amber & family headed to Studios first in order to sign the kids up to participate in a Star Wars show.  They got there in time and signed up for an afternoon slot.  The rest of us met there in time to see the girls fight against Darth Vader with light sabers.  After the show, all the girls (except me) went to go build light sabers, while the guys and myself went and road Rockin' Roller Coaster.  Even Steve approved of the ride when it was done! 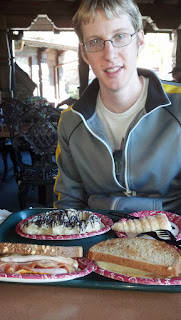 (Feb 1st -- after finishing up at Hollywood Studios, we headed to Epcot for one last time.  Steve and I broke off from the group and did our own thing.  First we went to Norway and ate dinner -- toasted sandwiches and "Norwegian desserts" -- a sweet pretzel & troll horn.  The troll horn was just a pastry filled with some sort of berried cream.  After eating, we went on an "Agent P mission" in Norway and then in Mexico.  Agent P is a character from the Disney Cartoon Phineas & Ferb.  P is Perry the platypus who always thwarts his nemesis Doofenshmirtz's evil plan.  You sign up at a kiosk, get a cell phone that plays videos, and go on a scavenger hunt throughout a specific country to stop the evil plan in process.  It sounds sort of crazy, but it's actually really neat!  You get to learn hidden things about that country's area as you solve the problem.) 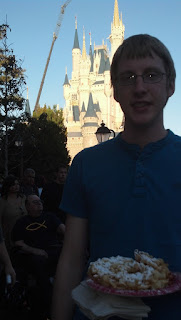 (Sat Feb 2nd -- We sadly saved the best for last -- Steve's funnel cake.  While at Disney, we had a meal plan that Steve was very skeptical about prior to the trip.  Each day, we both got 2 "quick service" meals (entree/side + beverage + dessert) & 1 snack.  A quick service meal is an over the counter service, not sit-down/waited on.  For the first couple of days, we would share meals if we wanted to eat 3 times a day, but by the end of the week we were only eating 2 a day because we slept in.  So by the end of the week we were a little ahed/right on our meal count.  We also stocked up on the snacks and went crazy towards the end.  Some of our favorite snacks were: LaFou's Brew -- a frozen apple concentrate drink with passion fruit syrup & marshmallow topping; Dole Whip -- pineapple soft serve with vanilla ice cream twist; root beer floats -- they had a good "bang for the snack buck" deal; and lastly, Steve's funnel cake.  He had been scoping out the funnel cakes all week, but all the places we saw wouldn't count it as a snack option.  On the last day, we found a little restaurant that had funnel cakes that counted!  Even though we had just eaten & were stuffed, Steve still made room for that funnel cake!)

We had a great time while at Disney and look forward to our next trip -- that's right!  Steve said he'd do it again! Prior to the trip, he only promised me 1 Willis style Disney trip.  But by the end of the week, Steve said it was fun and interesting and he'd do it again, only with the stipulation of it being years down the road.  I'll take it!
Posted by Unknown at 10:49 AM