Be prepared, now that Baby is shared with the public, the blog will probably be baby crazy for awhile.  I'm debating on making the blog private (meaning you'd have to ask for the password from me and sign in to read the blog) but for now I'll keep it open.

Before going to Disney, I had suspicions that I was pregnant.  Before we left for the trip, I took a test but it was negative.  I was pretty bummed and decided to just not think about it and enjoy the week at Disney without thinking about it.  However, when we got there, it's all I could think about!  My suspicions grew by the day and I didn't bring another test with me.  So I tried to enjoy the week as much as I could (I didn't tell anyone other than Steve and nearly wanted to explode every day).  I rode all the rides (even the roller coasters!) and had a good time.  On the last night, I couldn't contain it anymore.  I wanted to be able to tell my parents in person about the possible pregnancy and knew this was my last opportunity.  So Steve and I shadily pulled them into our room and shared our suspicion.  I could tell they were both containing their excitement and they said to wait for a confirmation until I go crazy.  As soon as we got home the next day, I took a test and found out I was pregnant!

I never really felt nauseous or sick those first few weeks and had to constantly remind myself that I really was pregnant.  I went to my doctor to have it confirmed and set up baby appointments.  Originally, I was supposed to be able to do all the gynecological visits in office and not have to get another doctor: however, the practice I go to had a change in it and I had to be referred to an OB/GYN.  After my doctor confirmed my pregnancy (at home pregnancy test -- $2, exact same test at doctor's office -- $28 - not counting the appointment cost!), she set up some referrals.  I was supposed to be referred to an endocrinologist after the miscarriage in November, but that never happened.  They fast tracked my referral and got into the thyroid doctor the next day!

Thyroid appointment -- apparently there is a short window to test the thyroid levels at the beginning of a pregnancy before you get false information (I don't know if I believe that).  So I had that appointment and had to have several blood tests done bi-weekly to make sure the levels are looking correct.  I have a follow-up with that doctor this week!

Steve's family came to visit the weekend of his birthday (I was 6 weeks pregnant).  We kept our secret from all the rest of our family until we had the chance to let them know they would be first time grandparents this year!  I found a onesie at the store that said "Destination Grandparents" on it.  So I wrapped it up and put it in a little bag.  When Steve got off work (his parents came Friday after lunch and Steve got home in the late afternoon), he gave them the "gift" to open up.  As soon as they opened it, they got it right away and were really excited with our news! Steve's mom got to share the news with his sister later in the evening (by using the same onesie scheme).   After their visit, we called up the rest of our families to let them know of our secret!

An appointment was set up with the OB/GYN during the 9th week of the pregnancy; but at 7 weeks, I had a scare and called the doctor.  I had some bleeding that had me concerned and fearing a miscarriage again (only there was no pain).  They got me an appointment for the next day to see what was going on.  We had an ultrasound and got to actually see the baby's heart beating!  What  a relief!  The discovered I had a small implantation bleed and they said it should heal up on its own, but warned there could be more bleeding from it.  Whew!  I didn't get to meet my doctor on this visit, so they kept my "first appointment" till scheduled for 2 weeks later. 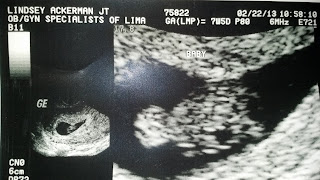 (Baby looking like a turtle at the first ultrasound.  Heartbeat was 155)

At the "first appointment", I had another ultrasound.  It's crazy how much baby changed in 2 weeks!  It went from looking like a turtle blog to an actual human.  Seeing it's little heart beat and hearing it really made it more real.  Up until this point, I still hadn't dealt with any nausea or morning sickness.  I had just been feeling really tired and lacked energy to get anything done.  We got to meet my new doctor and he went through a bunch of information with us.  He was quite comical and eased a bunch of my fears of a potential miscarriage or things going awry. 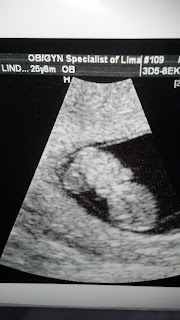 (Starting to look human!  Pretty sure it is upside down, but I honestly don't know - ha ha.  Heartbeat was a strong 171!)

Now speed up to this past week -- I've hit the 12 week mark and closing up the last week of my first trimester!  I still can't believe there's a baby inside me - ha ha!  That's a daily discussion in our household.  Even though things are supposed to get better into the 2nd trimester (like nausea going away), it seems that mine is finally picking up!  Every pregnancy is different and there's really no scale to measure from, some people are sick the whole time, others never.  My mornings start off fine and by the end of the day is when I'm feeling sick.  So I guess you'd say I have evening sickness??  It still hasn't been anything to complain about (although, I have gotten lots of attention from Steve over it, so I do complain a little bit I guess).  The main issues that I have are heartburn, nausea before & after eating, and being hungry a lot (refer back to the nausea around eating - ha!).  But like I said, it's nothing to complain about, just sharing what's going on!

Another weird thing is that I've been having issues with my hips hurting.  I've always had issues with my hips and used to see a chiropractor a lot growing up.  It looks like I may have to resume that if things don't shape up soon!  I can't imagine how they'll feel when I'm carrying around extra weight!  I got a crazy pillow to help sleep at night and it seems to be helping with the hip issue.

So I think that pretty much sums up everything baby related that I've been dying to blog about.  I'm sure there's stuff I've forgotten.  I've been trying to keep records of the pregnancy thus far (and been taking pictures, but none impressive to share yet).
Posted by Unknown at 8:20 AM