Finishing Up a Rookie Sap Season

Last weekend, we decided to call it on the sap season and turn our liquid gold into syrup!  We probably could have extended our sap season by another week or two (sap season isn't a set time, it occurs when it gets below freezing at night and above freezing during the day.  If there's too many days of it not getting cold enough at night, the sap loses its sugar content.)  With a couple of warm days on the horizon, we knew our current sap holding system would be in jeopardy.  We keep our sap in our cold sun room, but with the warm weather over the weekend, we feared our almost 8 gallons of sap losing its sugar content.  (With the 40-1 sap to syrup ration, this means we should get around 4-5 cups of syrup, Ha!)  Instead of taking that risk, we decided it was time to turn it into its dark sweet version.  We could have still kept collecting sap, but knew the whole sap to syrup process is long and daunting and didn't want to do it again this season. So we (well Steve) pulled out the taps in the trees and we celebrated with tons of sap boiling!

We probably should have started our sap to syrup process early in the morning; however, we had things to do before it was sap time!  Like walk through a home show and sign up at Sam's for a membership we bought through an AWESOME deal through LivingSocial.  ($45 for 1 year membership, + $20 giftcard, + $20 worth of food vouchers -- 1 free frozen pizza, 1 free rotisserie chicken, & 2 boxes of free cookies).  Any way, I digressed, back to the topic at hand.  So upon returning home, Steve started to boil sap at 3 o'clock and I headed to the craft store to buy some cute little jars.

Even though we didn't think through the amount of time it was going to take, we had at least gotten the idea to have 4 pots going at the same time.  Finally, around 10 pm (which was actually like 11 since we chose the day we "Spring Forward" to convert 8 gallons of sap to cups of syrup) I called it quits, leaving Steve to figure out what to do.  He decided to just put the sap/syrup which was now in 2 pots, in the sunroom over night (it was equivalent to the fridge temperature) and we'd finish it up the next day.

After church on Sunday, Steve continued the sap to syrup process and I ran to the craft store again for cheese cloth.  We read that cheese cloth is the best way to strain the syrup before consuming it.  The final stages of boiling the sap gets a little scary.  There's a fine line from having watery syrup to having burnt syrup.  We let it go as long as we both felt comfortable and finally called it quits (by this time, we had weeded down our 4 pots, to just 1!).  We let the syrup cool off a little as we prepared the jars for canning (put them in a hot water bath to both sanitize and warm up the glass).  We strained the syrup and heated it back up to 180 degrees (needed for proper canning).

Syrup is super simple to can.  All you have to do is pour the hot syrup into prepared jars, place on the lids, tighten the rings, and wait for the cool down process!  As the syrup cools, it creates a vacuum and seals the jars.  We listened for the pops and felt confident they canned properly (only time will tell as we open the jars when we need them).  We left 1 jar uncanned and just store it in our fridge. 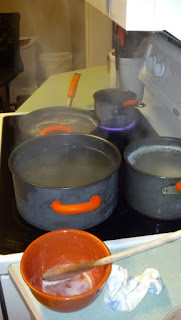 (Action shot of the 4 pans boiling at once.  There was so much humidity accumulating that we had to keep the kitchen windows open and finally moved our dehumidifier from downstairs to the kitchen.  While boiling sap, you have to stir it once in awhile and also skim off the scum that forms on the top when you add fresh sap to the pot.) 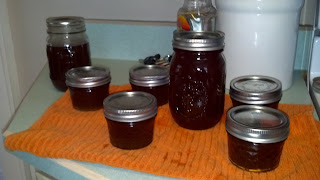 (Our wonderful bounty of syrup.  All in all, just over 3 pints!  We got a little more than we expected, but we may have started out with more sap than we realized.  The jar in the back right is the "uncanned" jar that we store in our fridge for our current syrup use!) 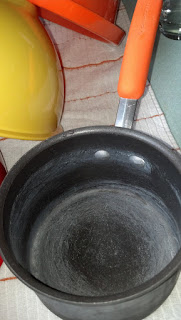 (One of the few casualties of Syrup production.  I begged and pleaded Steve to invest in different pots for the syrup process.  After our first attempt at syrup making, the pots came out fine.  However, this time, we weren't so lucky.  I'm guessing it has something to do with the amount of sap and length of time the sap boiled this time.  Last time was only 4-5 hours; this time, nearly double at around 10 hours!  I've decided to bite my tongue and continue to use the pots and pans until other problems persist.  Then Steve has lovingly agreed to purchase me new pots.  Note - these aren't just any pots, but Rachel Ray Hard Adonized pots which are pretty pricey :-/.  The other casuaity in the process -- the finish on one of the cabinets near the stove is a little messed up and flaking -- oops!)

So people have asked us -- Will we continue sapping next season??  Our answer -- YES!!  We've learned a lot of things in our rookie year and will try it again next year.  We just know we'll do things differently, like storing the syrup differently (Hopefully, I'll have my deep freezer by then.  You can always just freeze the sap until it's boiling time), tapping more trees to make the sap collection worth it, and blocking out an entire weekend at the end of the season devoted to 100% syrup production.  Also maybe an investment in a large stainless steel stockpot??
Posted by Unknown at 1:35 PM