It has been way too long since I've had time to sit and put thoughts together for the blog (and I'm 2 weeks late on the one month update, but late is better than never, right?).  Since my last post, she has grown a ton!  I don't know how much she weighs.  I need to get a better scale to figure that out.  However, I know she's grown because she can longer wear her newborn clothes.  That was hard on this momma to pack up all those cute little tiny outfits!  A lot more has happened this past month, like Bean's first holiday: 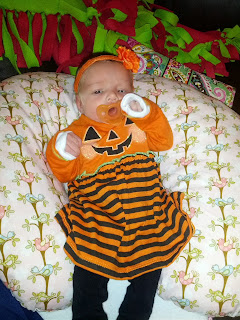 (Happy Halloween!  This was as dressed up as we got.  Halloween was different this year, as trick or treating was postponed due to weather.  So on actual Halloween, we headed to a friend's house for chili - yum!)

It seems like that "newborn" stage right at first is way easier than the stage we are in now.  In the beginning, Bean would sleep almost the entire day, but now, she is having more awake times, eating more often, and starting to show her personality.  She is still a very easy baby.  Only cries when she is hungry or when her tummy bothers her (nothing a little gas drops can't fix!).  She does get clingy and high maintenance (wants to be held, but then doesn't want to be held, but then does. . . ) at times.  Usually it's not a big deal, unless I have other things I want to get done.

Life with a baby isn't what I expected.  I don't really know what I expected, but I didn't think about how long it would take me to accomplish things.  It seems like tasks that I could accomplish in 10 min now take 30.  Not sure why, other than I feel like I'm constantly checking on her, or trying to do things while holding her.  I think somehow babies know when you are busy and need to get stuff done.  Days that I have not much to do, she seems to sleep in big chunks (like 2+ hours), while days that I have a list a mile long, she will barely take a 30 min nap.  She has also decided that napping in momma's arms or on momma is much better than napping elsewhere.

The past few days I've been busy prepping our house for Thanksgiving.  We are those crazy people that decided to host our first Thanksgiving while having a 6 week old - ha.  But more on Thanksgiving in another post (if I find time to write it!).  I have been able to survive with one of the best inventions ever -- a baby harness!  I wasn't sold on it prior to baby.  I wasn't even going to register for one, but did when I found a cheaper one.  I have now used that thing 5 times in this past week alone and will be upgrading to a better one!  Bean loves that thing.  She'll be fussy and less than 2 min of being put in it, she's asleep.  However, about 30 min in and she just starts crying.  I'm guessing her little legs go numb or she's just tired of that position.  I however will take those 30 min to get stuff done! I am now a pro at baking, doing laundry, and even vacuuming while wearing her. 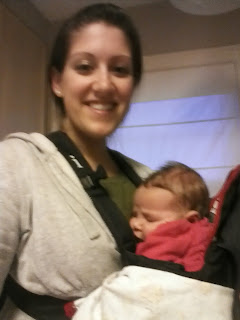 (Sleeping in her carrier while I get stuff done)

It is so crazy how much she has changed since birth!  Her personality would show through her crazy faces that she would make from the get-go.  In the beginning, those faces were probably just reflexes and not really intentional, but now she's being more intentional about her faces - especially smiles!  We have graduated form just smiling due to gas to also smiling from us making silly faces at her.  She's starting to have the hint of a laugh, and can't wait for that to come out in full force! 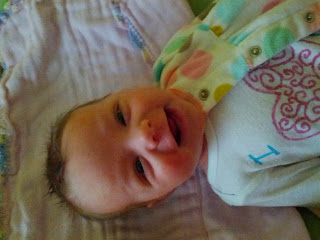 (Smiling at me being silly while changing her.  I would steal her paci from her mouth and tickle her gums with it.  I can't wait to hear her laugh.  I wonder if it will be as loud and characteristic as mine. . . )

Bean has been changing not only in personality, but also in her appearance!  She is starting to fill out a little more and has been fighting some baby acne.  There isn't anything you can do about it, other than using moisturizer if her face gets dry.  Baby acne is completely normal and usually goes away on its own.  It's caused by her still flushing out my hormones (there are other weird things that happen from those hormones but I'll save her the embarassment of writing about it, haha). 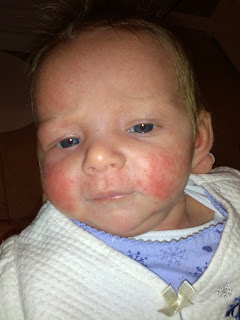 (Poor little Bean's acne.  She had it all over her face for a couple of weeks, but it is a lot better now.  Her cheeks are still a little rosy, but aren't full of bumps and scabs like they were.  Whew!)

We really can't complain about life with our sweet little babe.  We are absolutely enamored with her.  She already has Steve wrapped around her finger.  When he comes home from work, he has daddy-daughter time with her (which is beyond cute).  He is one great dad giving her all sorts of attention and love.

At night, she will go anywhere between 3.5-8 hours between feedings.  She's pretty random on how her stretches go.  I'm hoping for them to become a little more consistent (especially longer!).  She sleeps in her room at night which has helped me actually sleep better.  I no longer wake up to her little stirs, but wake up when she's ready to eat! My only complaint is that it sometimes gets exhausting being the only one to take care of her at night (especially when she's only going every 3.5 hours to eat and I get up a couple times in the night).  I don't wake Steve up when I go feed her.  It's good that one of us is getting good sleep.  We both wouldn't survive (each other) if we both were sleep deprived.  I sometimes will take naps, but it doesn't help.  There is something about having uninterrupted sleep that trumps sleeping in chunks.  That is one thing I'm definitely looking forward to with her growing up.  I'm definitely not ready for this little one to grow up.  Time is flying way too quick! 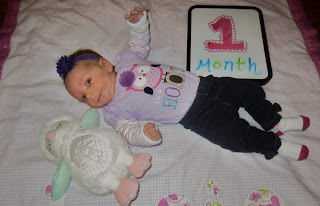