Even though technically, Halloween was Bean's first holiday, I'd have to say that Thanksgiving was more of her first holiday experience.  She got to celebrate 2 different Thanksgivings - one with my family in Indiana and the other with Steve's family at our own house in Ohio!  We are those crazy people who say, "Let's host our first Thanksgiving EVER all while having a 6 week old!"  As horrible as that idea sounds, everyone chipped in and helped the whole weekend, and it ended up being a great holiday!

We had Thanksgiving with my family the weekend before actual Thanksgiving.  This was Bean's first big car trip!  She was a champ.  She slept the whole time (except for a little 5 minute freakout - good thing I could reach back to her and pop that paci in her mouth!).  We had plans to stop halfway so that she could be fed and we would eat as well.  However, she chose to just keep sleeping, so mom & dad just stopped to grab food and keep heading down the highway.  With Bean's first trip to Indiana, there was of course, lots of people who stopped in to see her -- all her cousins, her great grandma, great uncle, great aunt, and of course all her aunts and uncles.  We had a packed weekend with lots of family!

The meal itself was sort of last minute planning, but we all pulled together and had a great dinner!  Not everyone can say they've eaten a turkey that was thawed in a swimming pool. . . but we can!  Don't worry, it was in a trash bag and not just swimming out in the pool all raw.  Although, we did have mom convinced that we skipped the brining process by just letting the pool's salt brine the turkey - tee hee :). 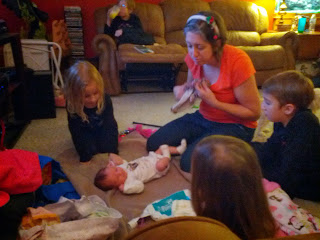 (Somehow changing a baby is quite the entertainment!) 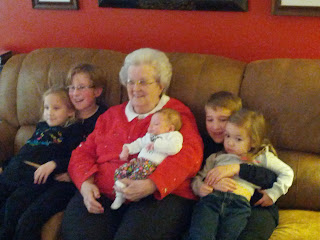 (Mammie and her great grandbabies!) 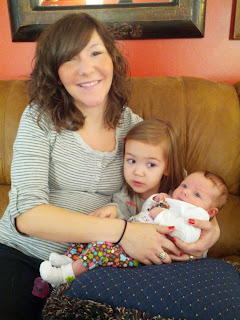 (I had to throw this picture in.  Pretty soon Charlotte will be holding her baby brother!  She is going to be an awesome big sis.  She helped calm Lucie with very cute "shhh!  shhh! shhhh!")

Steve's family trickled in on Wednesday & Thursday for Thanksgiving.  We had quite the house full! Steve's parents, brother, grandparents, sister, brother-in-law & their dog came for the long weekend!  Only his parents, brother, and the dog actually stayed in the house (others went to a hotel).  In prepping for Thanksgiving, we took inventory of items around our house and soon realized we weren't prepared at all to host a holiday with so many people.  Our little glass kitchen table was in no way going to allow 9 people to dine around it and there wasn't enough seating in the living room, either.  Plus, one of our couches was in serious need of some TLC (the back support cracked and was being held together with duct tape, ad the cushions were not as springy as they once were).  After schlepping Bean around several different furniture stores, we settled on a couch and dining room set we found online.  Both purchases were big hits with the family and really provided the seating we needed! 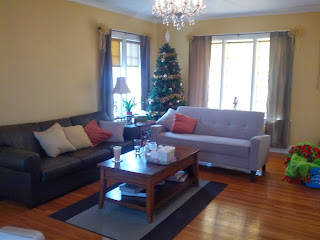 (The new grey couch.  It is much firmer than our old white couch and is even a little taller than our brown couch.  You can see a version of the white couch this new one replaced here. Oh and check out that Christmas tree.  Man Christmas makes me happy!) 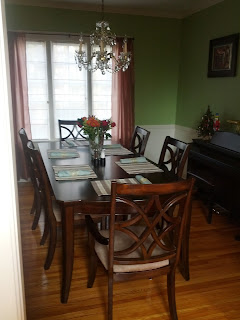 (New dining room set!  You can see our old little glass table here.  Now that little glass table is in our "sunroom".  With a new fancy table, we had to get new placemats, dishes, and pulled the trigger on some cloth napkins.  I am not one for cloth napkins, but they did the job with so many people here - that is until someone threw off the system by sitting in a different seat - ASHLEY!)

It was great having all the help while Steve's family was here.  His parents and brother really helped out a lot in raking all the rest of our leaves!  This year, Steve has had the sole responsibility of leaf raking.  He spent a couple Saturdays/Sundays keeping the front yard tidy, but the back yard was totally neglected.  All those leaves provided a nice activity for everyone, right?  I think they raked almost 40 bags of leaves - whoa baby! 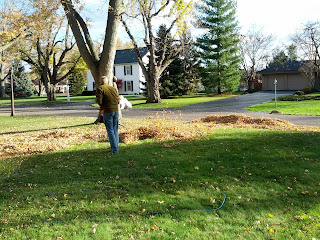 (Steve working on piling up leaves in the front a few weeks ago.) 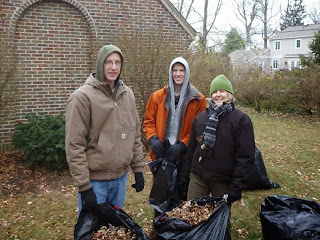 (I stole this picture from Trisha.  Thanks for all the work on the leaves!)

And here I'll leave you with some cuteness from our little Turkey: 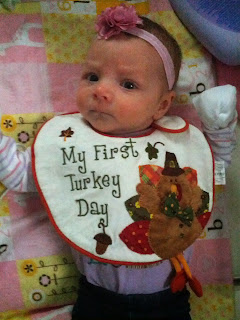 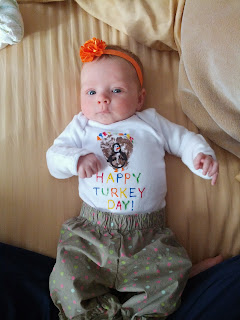 (I posted this photo on Facebook, but I'll give a better explanation of it.  That is a homemade onesie and Bean's first craft - ha ha.  That turkey (on the onesie, not the baby) is made out of her feet prints!  Steve held her while I painted her feet and placed them on the onesie.  She was a champ and did great, resulting in one cute little outfit!)
Posted by Unknown at 1:45 PM