We are pretty blessed with our little Bean.  She is usually a very happy baby and easy going.  We do have some tummy issues here and there that make her cranky and clingy, but all in all, we can't complain with how easy she is!

We made the decision to drive to New Jersey with a 2 month old well before she was born.  We knew we didn't want to try to tackle flying with a baby yet, and wanted to see all of Steve's family for Christmas.  Bean rarely cries when in her car seat and generally just sleeps in the car, whether it be a short trip or a a few hours.  So the decision was made, the car was loaded up, and off we went to New Jersey!

We left my parents' house around 8am.  Bean had been fed, changed, and was ready to fall back to sleep.  She was asleep before we even hit the gas station to fill up the car and start our trek.  I started off the jounrey in the front with Steve.  We weren't sure how she was going to do, but thought I'd at least start up in the front, and switch to the back when she needed it.  Typically, she eats around every 2.5 hours.  So at the 2.5 hour mark, I went ahead and pumped and prepped a bottle for Bean, whenever she chose to wake up.  It wasn't until the 4 hour mark that she woke up and immediately started crying! 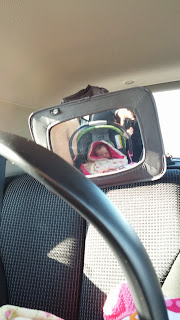 (My view from behind my shoulder. Steve could see her via her mirror in his rear view mirror.)

Steve pulled over on the shoulder of the highway and I climbed in the back.  Once I was buckled and the coast was clear, he pulled right back on the highway.  I fed Bean a bottle while she was still in her car seat.  About halfway through her bottle, I would try to pat her tummy to make her burp, but that didn't really work.  So I would just end up feeding her the rest without burping and I'd give her gas medicine to try to prevent any meltdowns.  This mostly worked, but she would spit up a lot. I would just be ready with a burp cloth to clean it up! 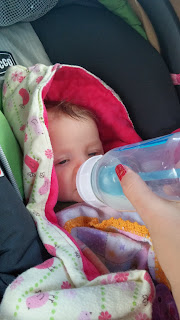 The child can't resist falling asleep in the car.  Pretty much after the bottle was finished up, she'd fall right back to sleep.  She slept for a couple hours, when we made our first stop.  We had a planned stop at a mall so that I could get my wedding ring cleaned.  I have to get it done every 6 months in order to keep up the warranty.  Since we don't have that jewelry store around us, it worked to do it on our drive.  While Steve headed with my ring to the store, I changed Bean and fed her in the food court.  We then ate our lunch, I cleaned my pump supplies in the bathroom (I was even prepared with a bottle brush and packets of Dawn), and we loaded back up and continued our journey.  I returned to my seat in the front again.

I again prepped a bottle at the 2.5 hour mark, but she slept longer than that.  We did the same routine of pulling onto the shoulder, me climbing in the back, and heading back on our way as Bean took a bottle.  This time, she stayed awake a little bit and we played with her plethora of toys.  Okay, really, I played with her toys and she just watched.  Her current favorite entertainment is silly faces, so I did a bunch of them, until I started getting car sick and couldn't look at her.  She eventually fell back asleep. Around dinner time, we hit a stretch of area where there were no food stops!  It being Christmas Eve, we already knew we'd be hitting slim pickens.  I had to search on my phone to find a McDonald's to stop at.  Timing worked out perfectly.  Just as we started to take our exit, Bean woke up hungry!  We did the same routine at the stop - changing, feeding baby, cleaning bottle and supplies, eating, etc.  Only at this stop, Bean chose to blow out her diaper, so there was a clothing change.  I just had to deal with the excrement on me until our final destination ;-). 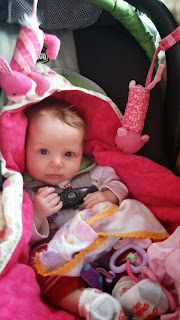 Bean has more awake time in the evening.  I wasn't sure how it was going to go.  I started in the front again, but soon had to switch to the back.  I had hopes of her being able to make it til her next feeding at Nanny's house, but that didn't happen.  I ended up having to prep another bottle (while she was awake and crying because she was hungry earlier than the 2.5 hour mark) right as we hit Philadelphia.  This was probably the most stressful part of the trip because she wanted food now and I wasn't ready to give it to her! Finally, a bottle was ready and she was happy again.  We only had about an hour or so left in our journey.  We did the usual entertaining with toys and faces (until I got car sick again).  We pulled into Nanny's just before 10pm.  We made it!  Wooooooo!!

Bean was an absolute trooper!  Not many 2.5 month olds travel so well.  We know we are blessed and hope she continues her love of the carseat and sleeping in the car.  Now we will just have to wait and see how she travels via plane. . .

Our journey on the way back was pretty much the same just in reverse.  We started around the same time in the morning and had a couple of planned stops again.  We had to eat an earlier lunch (to avoid the span of no food options again) which threw off the timing of bottles/nursing.  But it all worked out.  I had prepped  bottle for her at the beginning of the drive, but she ended up sleeping through til we stopped, so I just held onto that bottle for later.  I also ended up coming up with a better system of cleaning the pump supplies.  I ended up just pouring water through it and drying it with napkins.  Then I fully cleaned/sanitzed when I got home that evening.

Steve had done some research of a little town we had drove through on our way to Jersey and decided we should stop there for dinner on our way back.  We stopped in Wheeling, West Virginia to eat at a local place called Later Alligator.  We parked our car a few blocks away and walked to the little eatery.  Bean's eating time had gotten a little messed up, so she just hung out with us while we ate.  She got fussy towards the end, and I fed her a little, but I think she mostly just wanted cuddle time.  I chose to not put her back in her carseat to carry her to the car.  Instead, I held her bundled under a blanket (with her cute hat from Aunt Ashley!) and we walked back to the car.  I changed her (on the seat of the car) and then put her back in the car seat.  I chose to go ahead and stay in the back with her.  She was still sort of fussing and since the bottles/feedings got messed up, I decided I should stay nearby. 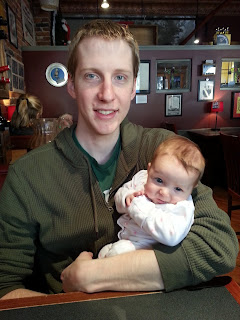 (At Later Alligator!  Steve got some pulled pork/mac'n'cheese sandwhich and I got a chicken wrap.  Both were pretty tasty!  We especially liked the atmosphere.  The place is known for its crepes, but we weren't hungry enough to get some for dessert.  Maybe next time!) 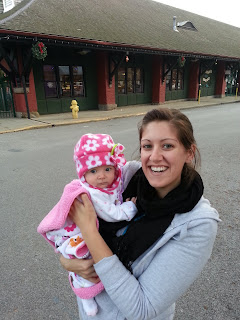 (The little town was really cute and quaint.  It looks like there is a large market similar to Findlay Market in Cincinnati.  Check out that cute hat! Hahahaha)


Whenever we travel, I try my hardest to stay awake for Steve.  But I just couldn't fight it this time around.  Steve listedned to some audio story about the Khans an it put me right to sleep!  Usually we try to switch drivers, but Steve didn't want to have to worry about Bean.  He left that to me while he did all the driving.  What an awesome man I'm married to!  We got home around 7:30.  Just in time for bath time!  Once Bean was all snuggly and clean, she ate and went to bed!  You would think that all of that sleeping in the car would keep her up, but it had the opposite effect.  All that driving tuckered her out!
Posted by Unknown at 1:04 PM