After spending time for Christmas with my family in Indiana, we loaded up the car and began the second portion of our Christmas with Steve's family.  On Christmas Eve, we woke up early and began our long drive to New Jersey (where Steve's grandparents live).  We weren't sure how Bean would do in the car, but she was an absolute trooper! (More on that in another post!)

We got to Jersey late on Tuesday and spent the evening with just Steve's grandparents.  The next day, the rest of his family showed up and the mayhem began.  There was lots of Bean passing and sharing.  She did great (except for one minor freakout when I gave her to an aunt, but she quickly got over it).  It was good to see all the family and continue Christmas (and Jersey) traditions, like a trip to the boardwalk for pizza & taffee! 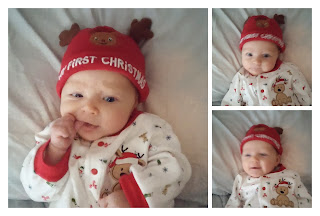 (This kid just gets cuter and cuter!  Look at those little antlers!) 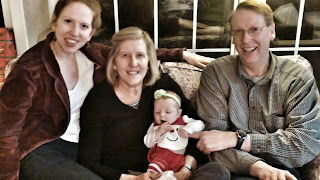 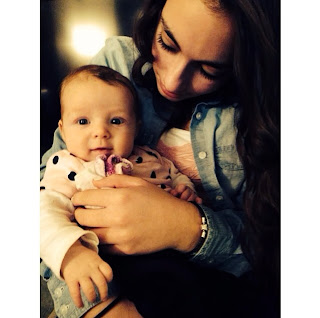 (Hanging out with Cousin Daniella!  All of Steve's cousins were especially excited this Christmas to be able to play with a baby, let alone a little girl!  They all did great sharing time with and entertaining baby! This was on of my favorite photos with the cousins, Bean was looking straight at the camera, which is quite rare - ha!) 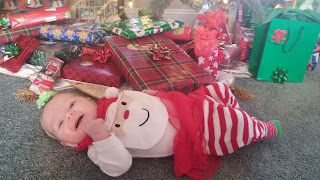 (Merry Christmas!  Bean came out of Jersey Christmas with quite the haul!  She got lots of clothes, some toys, a booster seat, and a really neat play mat.  She's already gotten lots of use out of the mat.) 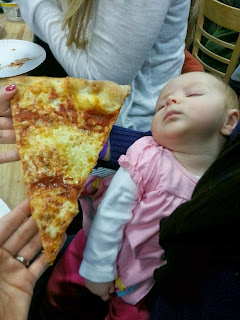 (Jersey tradition - Manco & Manco's Pizza - formerly Mack & Manco's.  The pizza slice was almost as big as Bean!  She was pretty tired and slept through most of lunch, despite the crowed and noise space inside the pizza place.) 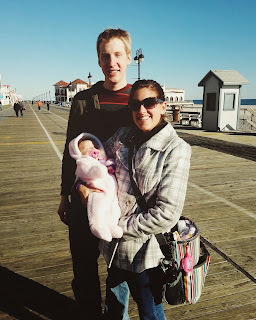 (On the Boardwalk!  Since we knew the pizza place was small and crowded, we didn't take Bean in her carseat.  Instead, we carried her around.  Usually, she is bundled in a blanket in her carrier, so I had to bundle her up in a warm "snow" suit.  Look at that cute pink fuzz ball, haha.) 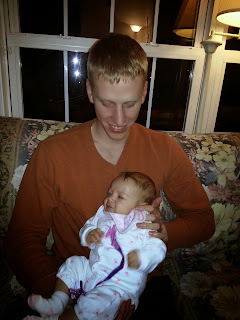 (Uncle Ian was able to escape Bean time back at Thanksgiving, but he couldn't get away with it at Christmas.  He was forced into holding her by Steve.  He didn't hold her long. she was crying and hungry, but props to Ian for succumbing to sibling pressure!)
Posted by Unknown at 1:24 PM