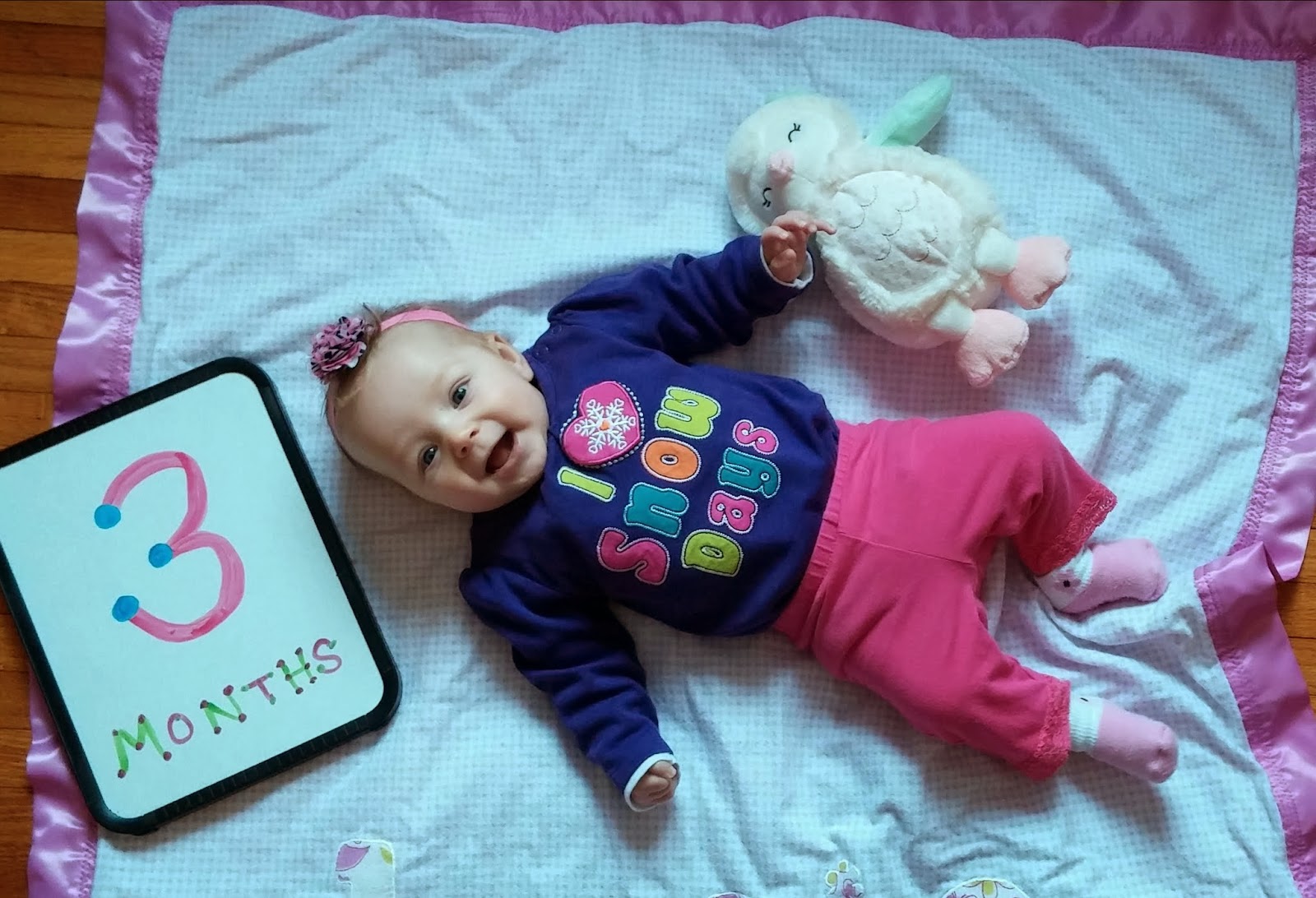 Somehow, Bean turned 3 months old today (and yes, it is actually today!  I'm actually on time!)!  It seems like just yesterday we brought her home, but then when I think back all we've done with her so far, 3 months sounds about right!

It seems like yet again she has changed so much in the past month!  In thinking through this past month with her, I realized we were almost gone as much as we were home.  We sure do love travelling and spending time with both of our families, but it is much different with a baby!  Both in a good and bad way - haha.

Bean did great over Christmas with all our travels.  She was an absolute trooper in the car and while being passed around to everyone.  I really got spoiled over the break having so many people to help entertain and hold baby.  But now that we are home, I realized how spoiled I was and have been working to "detox" baby from Christmas.  She had a rough couple of days learning that Momma can't hold and entertain her 24/7. 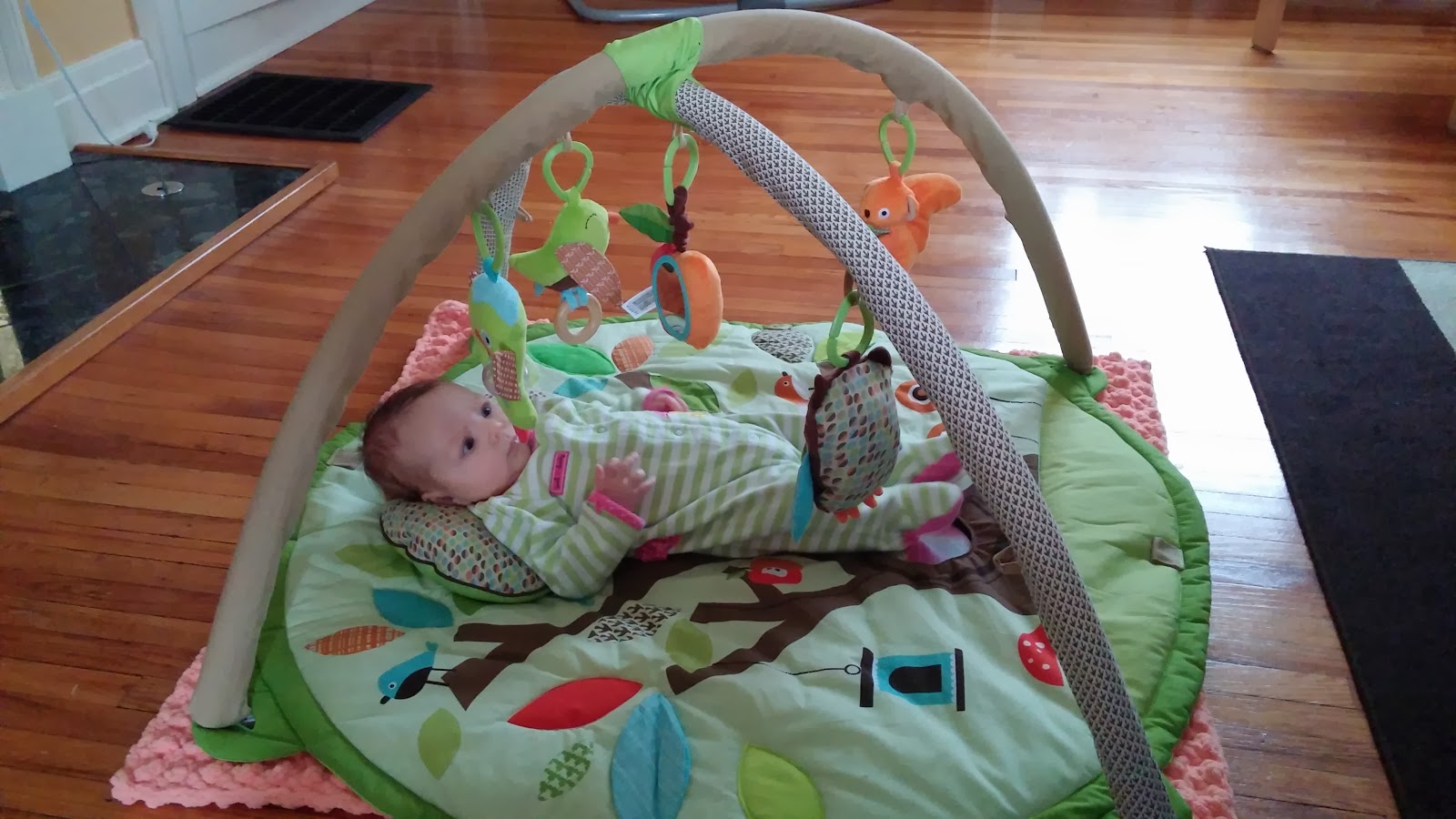 (For Christmas, Bean got this amazing play mat!  I love the brand SkipHop, and never thought anyone would actually get her this item (as it was expensive, but oh so cute!).  Nanny pulled through and got her this wonderful mat!  Bean loves to lay on it and kicks at the little owl that hangs.  I can get a lot of stuff done while she entertains herself with the toys.  Thanks Nanny!)

While traveling, Bean did great sleeping and stuck to her getting up 1x a night; however, that has changed the past few weeks.  She will have a random night of sleeping through the night, mixed in with nights of getting up 2x!  All the inconsistency drives me crazy!  When she does sleep through the night, I still end up waking up after about 5 or 6 hours of sleep and have trouble falling back to sleep.  When she does get up in the middle of the night, our routine has shortened significantly.  It used to take me almost a full hour to feed, change, and rock her back to sleep.  However, now we have it down to just 30 minutes!  I feed her halfway, change her diaper, then finish feeding her.  Usually, she falls asleep while we finish up the feeding.  The hardest part about nighttime feedings is not stepping on a creaky floorboard as I sneak out of her room! 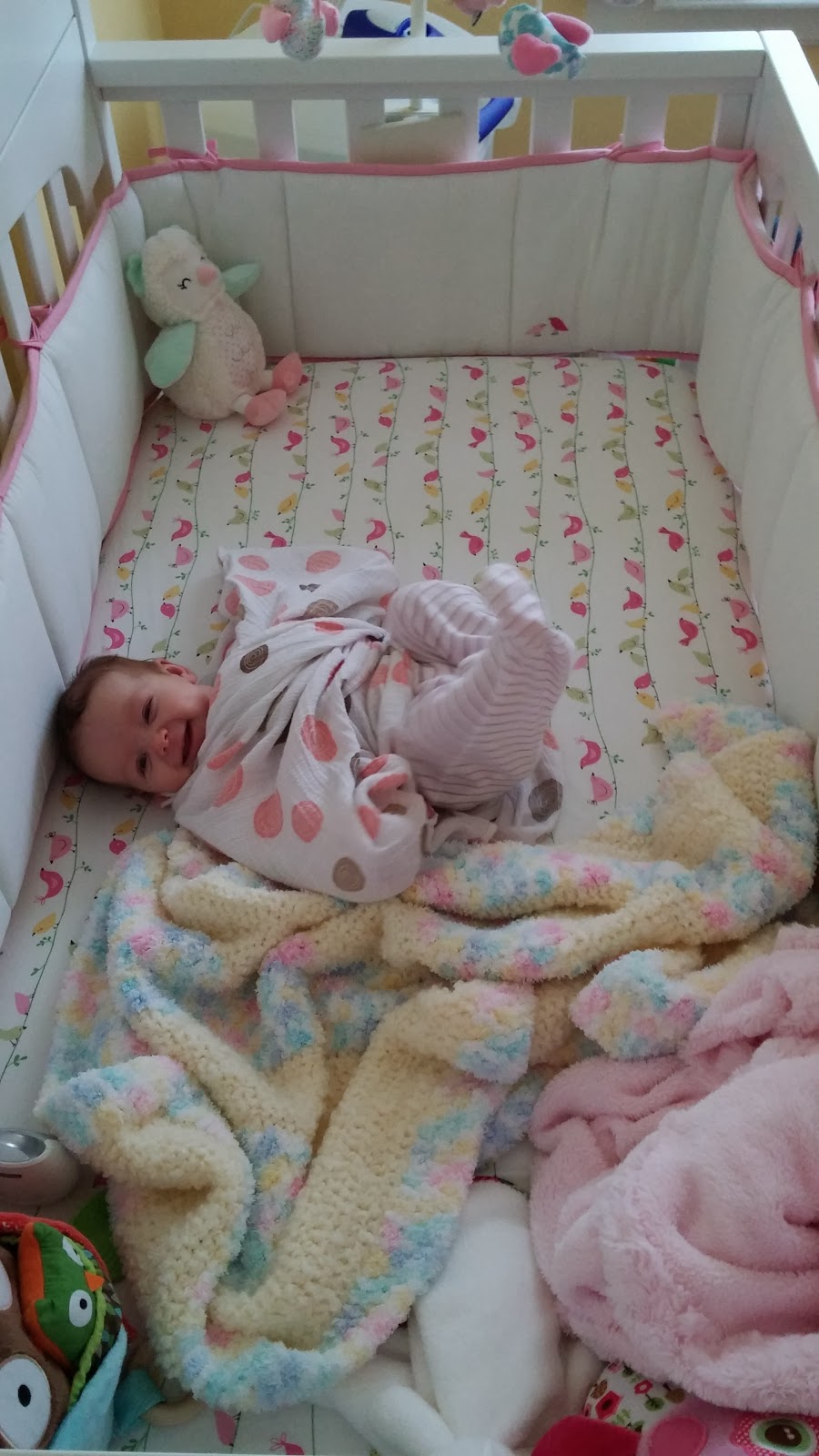 (When I lay Bean in her crib, she lays perpendicular to how she is laying in this picture.  Her new thing, is to kick her legs which makes her "slide" down the mattress into this position.  Her mattress is tilted a little to help with congestion.  I'm guessing we're going to have to put the mattress back flat now that she is becoming "mobile".  I find her like this most morning now - and she usually has a smile, too - unless she's really hungry!)

Last week, we had one really bad day that was equivalent to the day she got her 2 month shots.  I have no idea why she was so cranky.  At every feeding, she would scream (I do mean scream!), arch her back, and refuse to eat; however, she was acting like she was hungry and it was feeding time.  She kept doing it all day and by night time, I was very frustrated!  I even tried to feed her a bottle to see if it had to do with nursing, but that didn't seem to matter.  Finally, I had to step away and Steve took over.  He ended up just putting her to bed.  And of course, she decided to sleep through the night!  All the screaming and frustrations of the day were not worth that night's sleep! I'll take a calmer baby and getting up a couple times at night any day!

This week, I've made a great effort to not feed Bean before the 2.5 hour mark.  At first she didn't like it, and I had to go to great lengths to entertain her, but now she's accustomed to the new schedule.  My goal is to work towards feedings every 3 hours.  Today, she hit the 3 hour mark a couple of times all on her own!  She still takes several cat naps throughout the day based on her feedings.  I never know how our day is going to look (as far as if she'll take naps in big chunks, or several small ones).  It always seems she is awake when I want her napping and napping when I want her awake.  Oh well.  She still naps best when someone is holding her, with her swing as a close second.  I've been starting to put her down for a morning nap in her crib, just so I can get stuff done around the house, yet hear her on the monitor.

We have a pretty good established routine come night time.  She has a good chunk of awake time in the evening right around our dinner time.  Before Bean, we were really good about eating at the dinner table, now we eat in the living room.  Sometimes, we have to take turns as to who eats and who tends to baby.  We looks forward to when she will sit at the table with us.  We have dreams of being able to hold real conversations during dinner time, but I'm beginning to surmise that is just a dream.

Other notable accomplishments -- Bean has started to grasp and "play" with certain toys.  She has a little bunny blanket that Steve claims I am "pushing" on her.  I'm the Mom, I get to push on her whatever I want!  She likes to grasp/rub at the bunny when she falls asleep, and will even entertain herself by sucking on its ears when she wakes up.  I like that she is starting to be able to entertain herself with things like her tongue and stuffed animals.  I look forward to her playing with more toys as she grows! 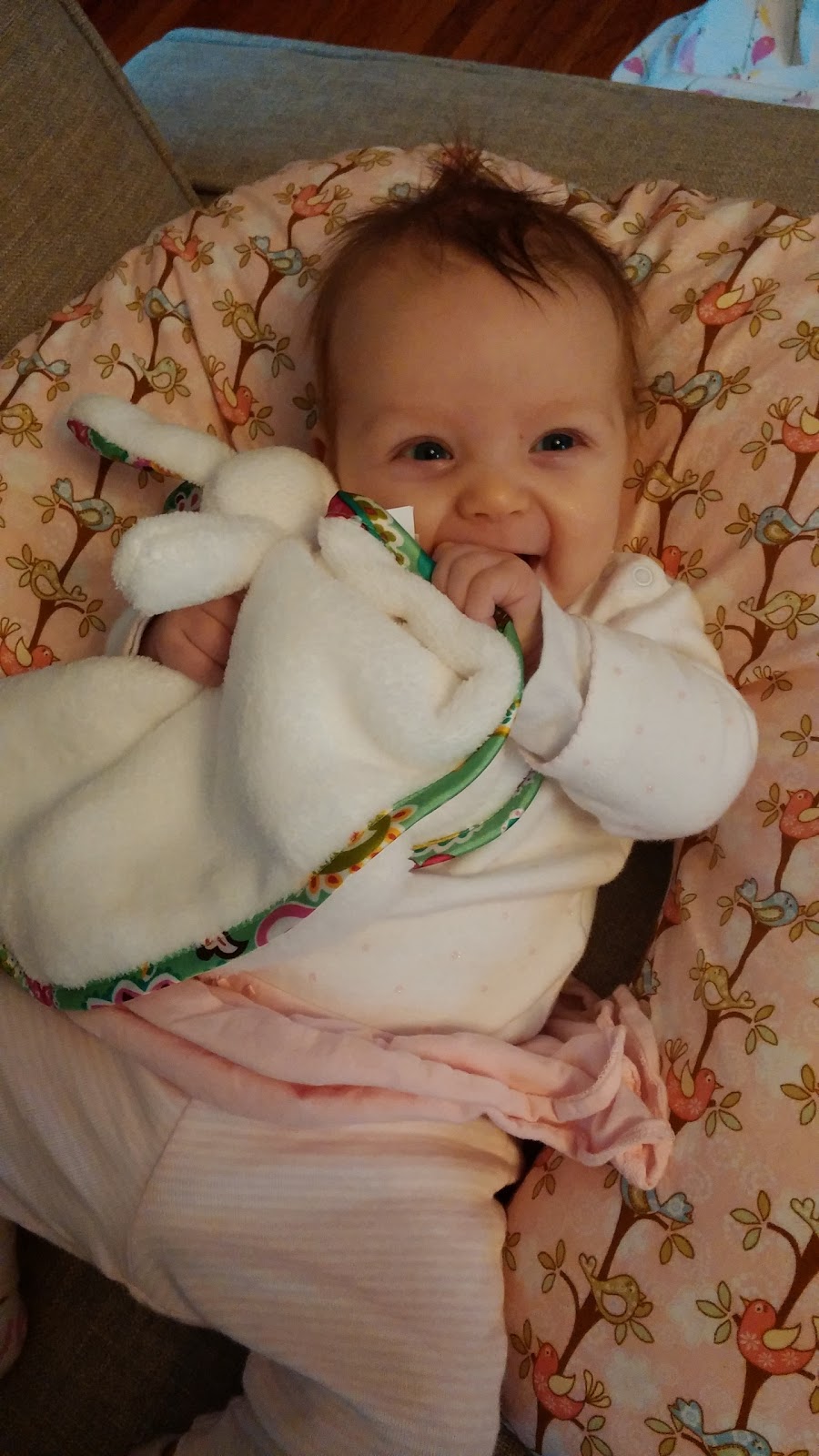 (The bunny that Steve claims I'm forcing on Bean.  Does that look like she's being forced?!)

One other accomplishment is that she rolled over!  She went from tummy to back all on her own.  We thought it was a random fluke, but she did it several times in a row (I even videotaped it!).  But she hasn't done it again since that day.  I've been doing better about giving her tummy time (I was very inconsistent in the beginning).  We still don't do it everyday, but definitely do it more than we used to!

My favorite part of this last month is watching her discover laughter! She is a very smiley baby and loves to smile at silly faces, sounds, and anyone.  The other day, I was playing with her by making sounds and tipping her over.  Each time I did it, her smile got bigger and bigger, and she began to laugh.  It was almost a full out hysterical belly laugh, but not quite.  I tried to catch it on video, but she hasn't laughed like that again.  Soon enough, I know our house will be filled with lots more of her coos and laughs (right now, it's mostly filled with crying). 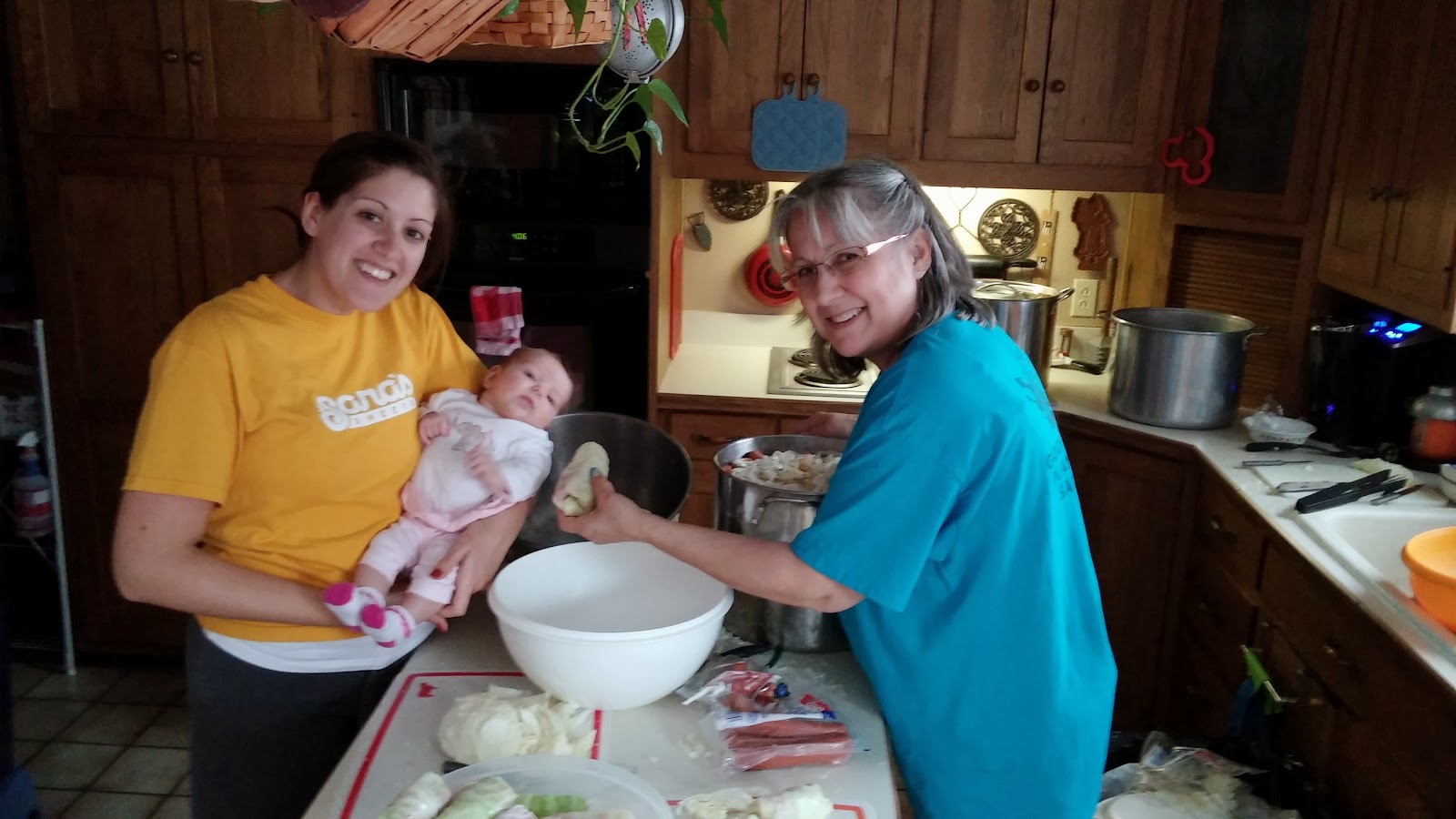 (Lastly, I'll throw in this bonus picture.  Over Christmas, I got to help my mom make a traditional Romanian meal of cabbage rolls and sauerkraut that we call galushta.  We (started with my grandma who was full blooded Romanian) always make this meal around Christmas.  This year's cabbage rolls were pretty big and we joked that they were almost as big as Bean.  I absolutely love galushta, but apparently Bean does not :(. Maybe that will change when she gets to eat it first hands in a few years!)
Posted by Unknown at 9:05 PM