I had another first this week.  I got my car stuck in mud, and boy do I mean stuck!  It took 5 girls, 1 guy, and a tractor to finally free my car.

What was supposed to be a surprise party for a lady from church.  I picked up my friend Sara and headed towards the lady's house who was throwing the party.  On the invite, she had stated to drive through her yard around to the back of the house to park and hide the cars.  I did just that, or at least I tried.  I had only gone about 8 feet in the yard when  I started thinking, "Hmmm, I'm leaving tire marks, it's going to be obvious cars are driving back here.  Oh man, this is really muddy, I might get stuck." I'm pretty sure I said the last part out loud, because Sara responded with a "maybe you should back out".

Well, it was too late.  I wasn't going anywhere, at least without tearing up the yard.  I left Sara in the car with Bean and I went to find the host and let her know of the situation.  She came out and we decided to try to get the car back on the driveway.  She and I ended up pushing the car while Sara manned the gas.  We got the car rocking, but would need more help in getting it free.  We decided to go inside and deal with the car later since the birthday girl was due to arrive.  However, I'm pretty sure it was going to be obvious that something was up by the car randomly parked in the yard :)

We had a good time at the party.  Ate delicious food, laughed, and met some new ladies.  After cake and presents, I had to ask for help with the car so that I could get Bean home and to bed.  The ladies donned some extra clothes and shoes from the host and came out to help.  There were about 4 of us pushing on the car.  We could get the car rocking, but in the end, it was just digging deeper holes (and kicking up mud all over -- sorry Candace!). 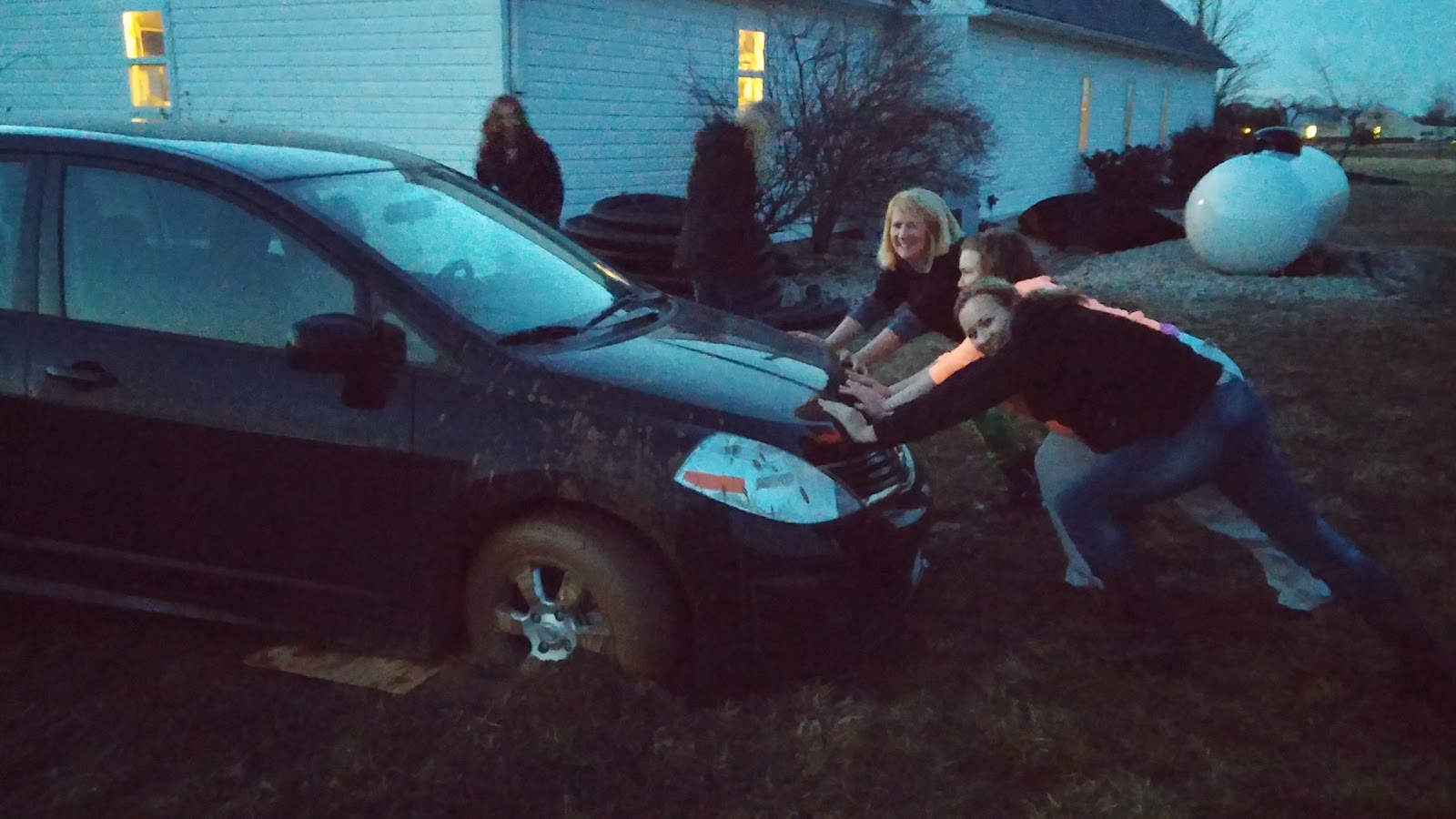 (This is where the car first got stuck and we are attempting to push it backwards onto the driveway about 10 feet away.  Since it was my car, I tried to make sure I was always doing the most work - I felt awful having women who were all dressed up for a party pushing my car in the mud!  The next day, my arms were so sore!) 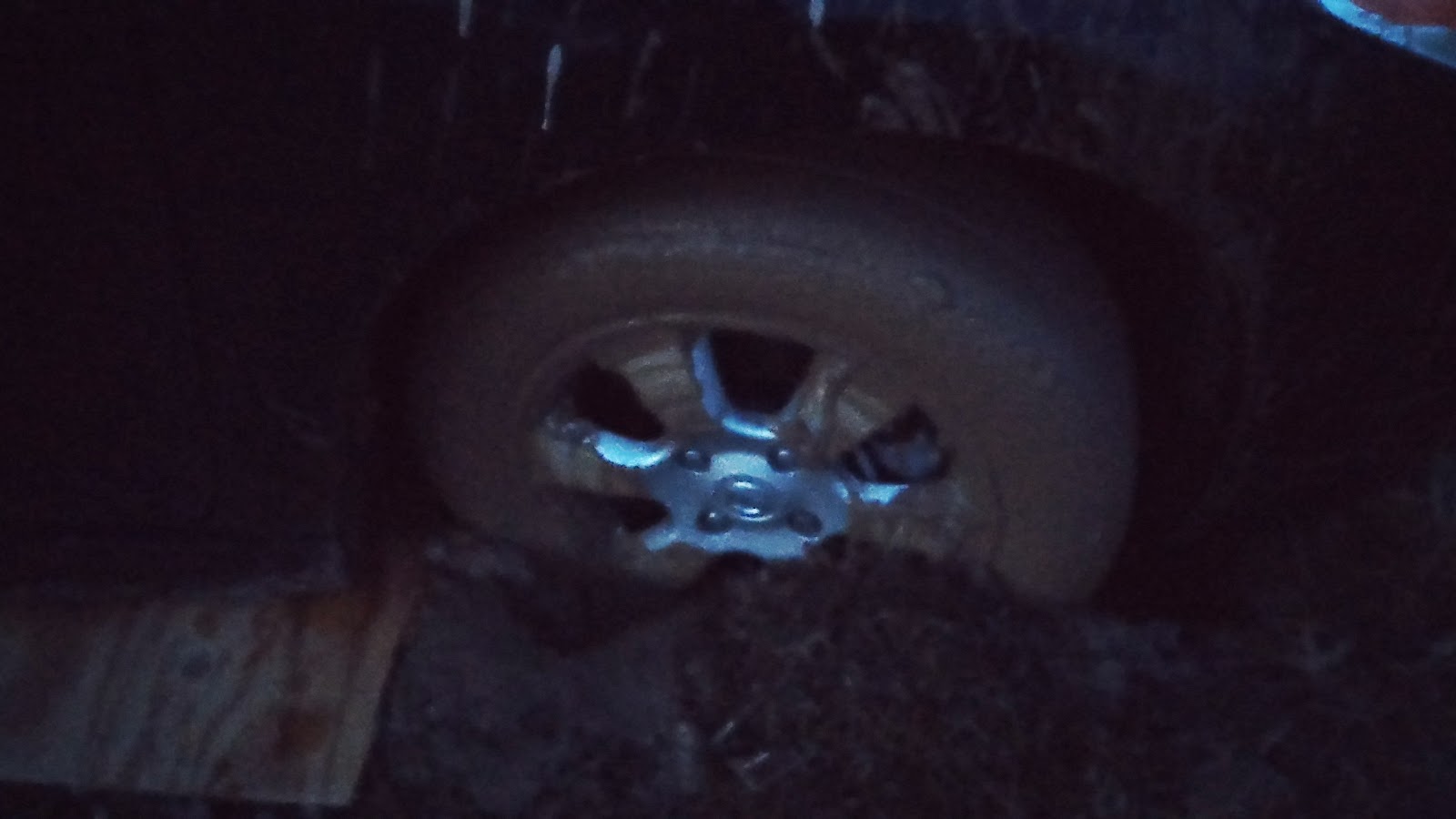 (Tht's one pretty stuck wheel!  We tried to use planks to give traction to the tires, but we couldn't get them down in the mud at the right angle.  There are no more pictures of the rescue attempt because from here on out, it was pretty dark.  The beginning of the rescue started at 8pm.)


One of the wives called her husband (he was to pick her up) and he brought his truck and some cables.  Only problem was that he feared driving his truck on the yard and getting stuck himself.  So for some reason, he ended up in the driver's seat with 4/5 girls pushing from the back (so far we had been trying from the front since that would be the shorter distance to get the car out of the yard).  Ironically, his wife ended up slipping off the edge of the back as we were pushing and landed in the mud (this was the first time I had met these people, too!).  We regrouped after laughing and continued pushing.  Finally, the car lurched forward!  I yelled, "Don't get the back tires in the holes!", just as the back tires got stuck in the holes. HA!  We had to push it some more, and it was free!

The guy continued to drive the car, making a big arc pattern around the edge of the yard, only the further he got, the muddier it got!  We had to keep pushing on the back and helping him out until the car ended up getting stuck again, only this time it was much worse! At this point, it was decided that the only way the car was coming out of the yard was by being towed.  The husband who was helping out found a chain that would work.  At this point, the front of the car was closer to the driveway, but the front end of the car was down in the mud and there was no way to get under the bumper to find a place to attach the chain.  So the decision was made to attach it to the frame at the back, and have a tractor tow the car all the way back around the arc back to the original starting point.

At this point, I got in the driver's seat and put my backing up skills to the test (don't worry, I have good backing up and parallel parking skills).  I had the car in reverse (neutral did nothing) and I let the tractor do most of the work.  A couple of times, I had to give it some gas if it started to get stuck.  It seems like this whole ordeal should have lasted way longer than it did, but in just over a half hour, my car was back on pavement!!! Oh, and I forgot to mention, that Steve had decided to come and try to help.  He pulled into the driveway as the tractor was finishing the arc and nearing the driveway -ha!

And what about Bean?!  I had snapped her into her carseat at the get-go of all the pushing.  When I realized that us girls couldn't just push the car out, I was going to unsnap the seat, and put her inside with a couple other ladies; however, in the 5 minutes of pushing the car, she had fallen asleep!  I made the decision to just leave the sleeping babe in the car that whole time.

I feel absolutely terrible for the yard my car tore up :-/.  I'm hoping that just filling in the holes and throwing on some grass seed will do the trick.  I've been having nightmares and anxiety all week stressing out about their yard.  If it was my own yard, I'd laugh it off as lesson learned, but it's really hard to do that with someone else's property.  And the worse part of the whole story?!  Had we just hooked the chain up at the back of the car at the get go, the damage would have just been 2 holes from the front tires, and not long car tracks, numerous holes, and mud everywhere.  UGH 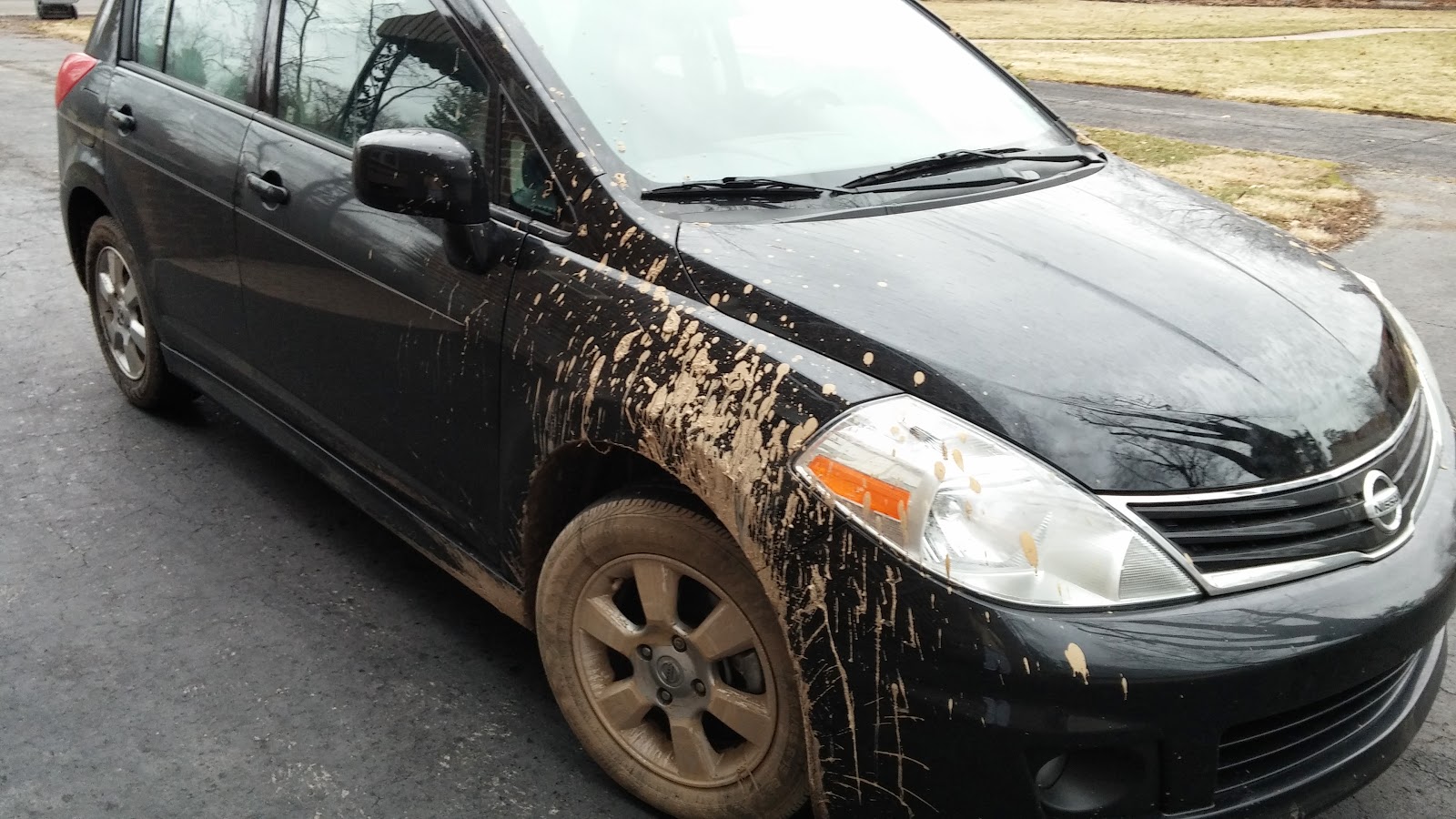 (I was able to document the damage the next day.  Well, the "damage" to the car.  Luckily, we live close to a car wash.  It just so happened to be a rainy day the next day, so I pulled the car out of the garage and into the rain.  It rained just enough to wet the mud on the car.  I then loaded Bean up and we headed to the car wash.) 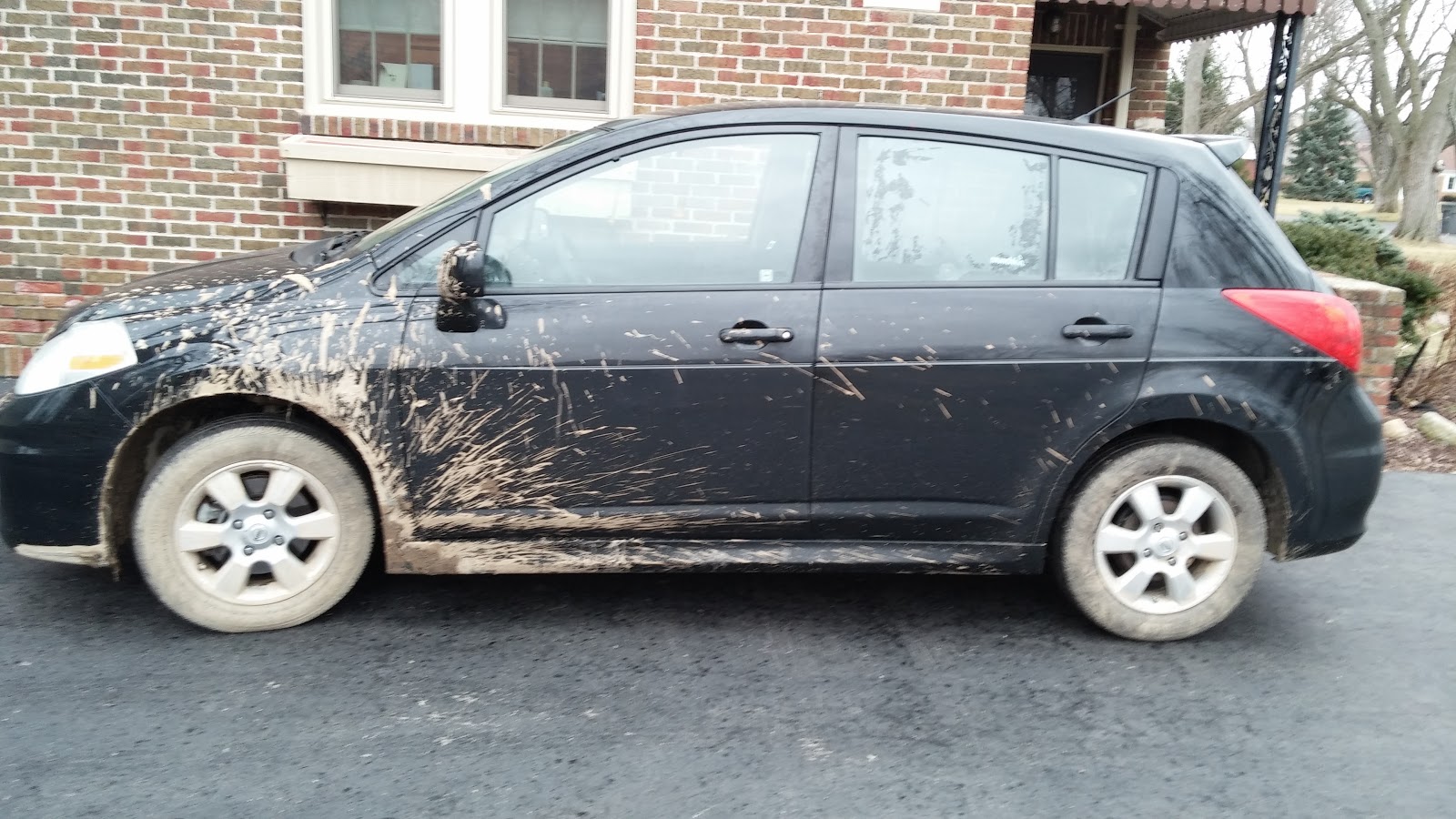 (Aaaaand the other side of the car.)
Posted by Unknown at 9:15 PM