Bean got to experience her first Ikea experience and boy was it memorable.  Before telling the story of her experience, I need to back track and set it up.

On Valentine's day, Mommom & Poppop came to visit!  This was a pretty laid back visit with the focus on Steve for his birthday and of course time with Bean! The next day, Uncle Scott and Aunt Ashley came up to "observe Bean in her natural environment" (their words) for the afternoon.  We then caravan-ed to Dayton for pizza at our favorite place - Dewey's. The wait was almost an hour, but we had come to Dayton just for their pizza and decided the hour wasn't too bad.  That was before they gave our reservation away... There was some miscommunication between the host and manager and the wrong party of six got seated at our table (we knew it was ours because they had a baby sling at the table).  The host immediately realized what had happened and the manager admitted fault.  We ended up getting all our pizza free, but had to wait another 15-20 min.  Finally at 8pm we were seated!  After dinner, we headed back to Lima while the others continued to Cincinnati.

The next morning, we woke up and loaded Bean back into the car and head to Cincinnati.  About an hour into the trip, she decided she was done with being in the carseat.  She cried a lot and I couldn't console her.  I knew she wasn't hungry so we just powered through the next 45 min to Ikea.  We got some Sweddish pancakes and tried to regroup.  Bean was much happier so we just chalked it up to not wanting to be in the car (even though she typically loves it).   After most of breakfast was eaten, I got her out of her seat/stroller and discovered that she had pooped through her diaper and through her cute new outfit from Mommom.  Good thing I had an extra outfit packed. . . 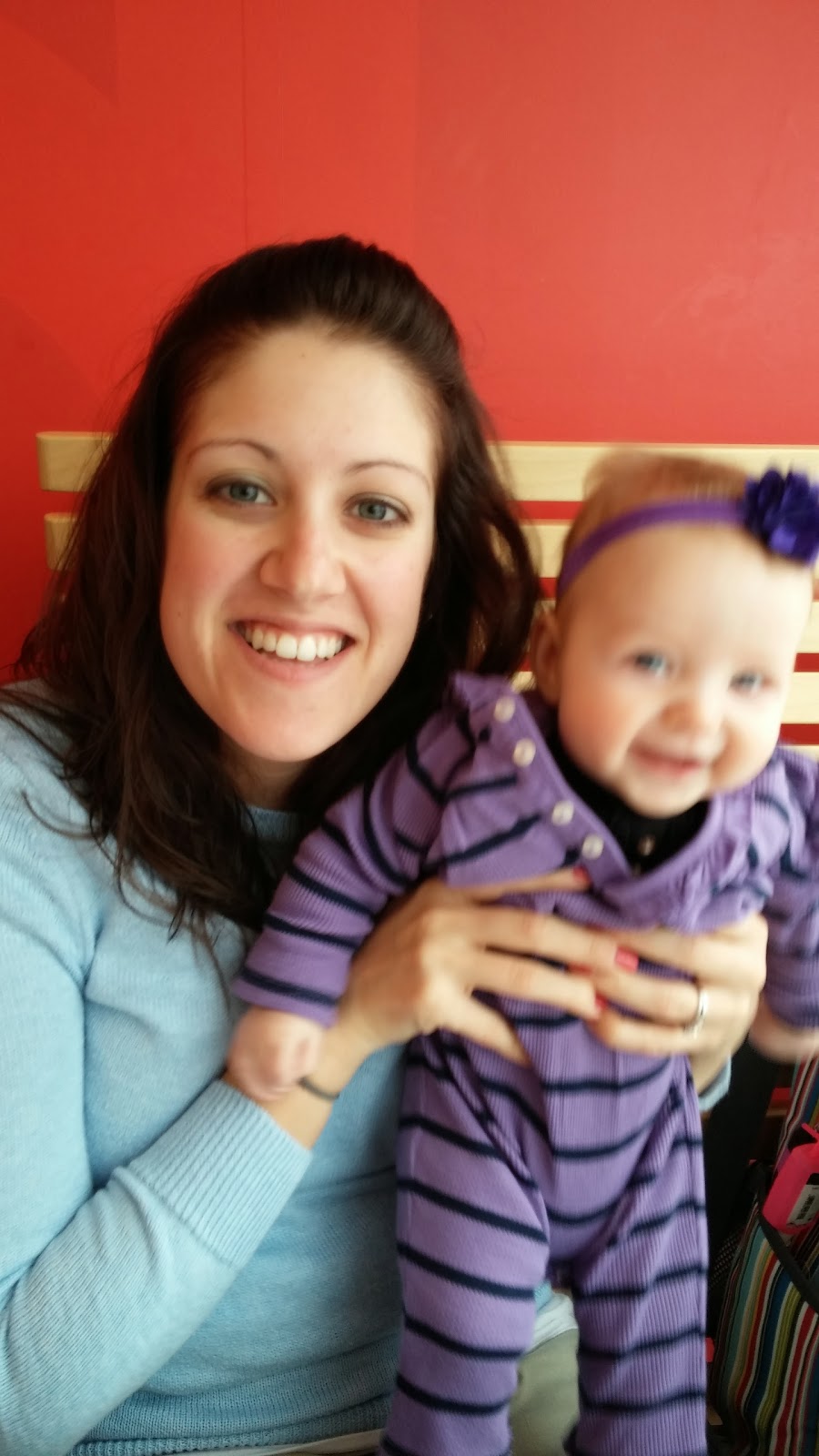 (Good thing we snapped this photo of Bean wearing her cute new outfit.  This was right before I discovered the poop up her side.  I'm pretty sure right after this photo was taken, I said, "I should probably change Bean".  Famous last words.) 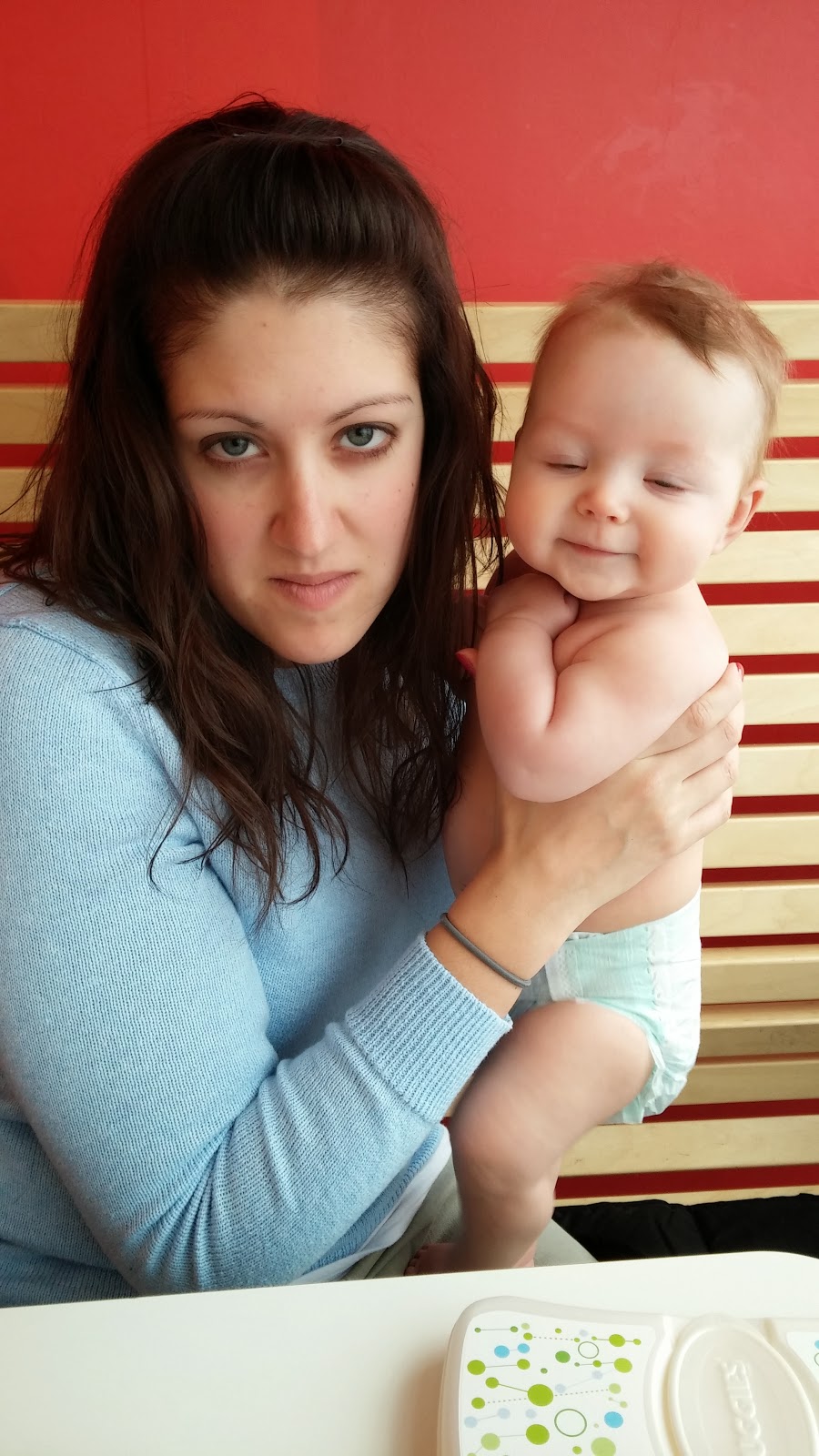 (Steve wanted to capture my frustration and he got more than he bargained for.  Bean was not cooperating in the picture taking. Although, even with her eyes closed she's so cute!) 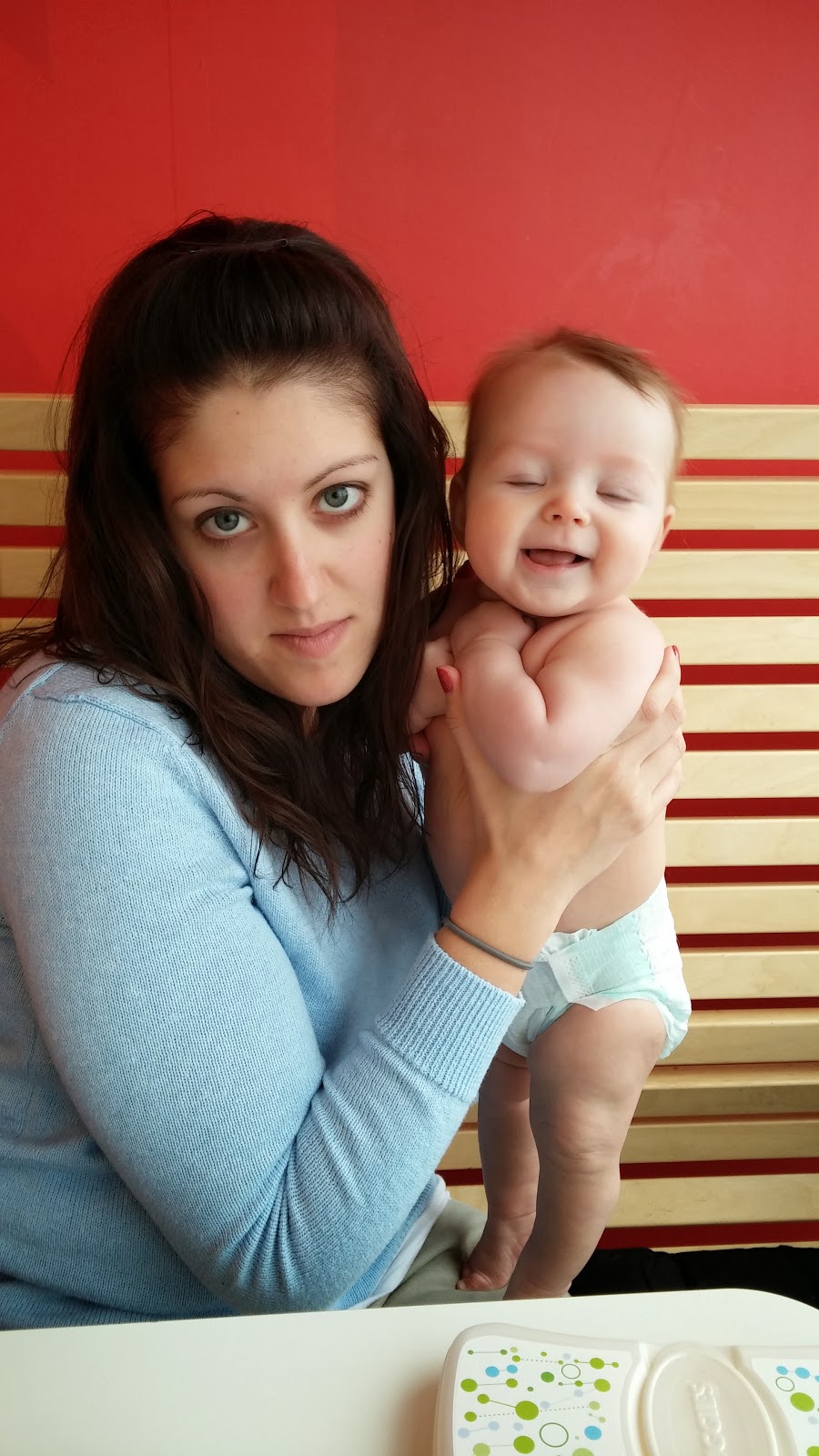 (Get your act together Bean! We have Ikea to explore and a schedule to stick to! No more unscheduled blow outs!) 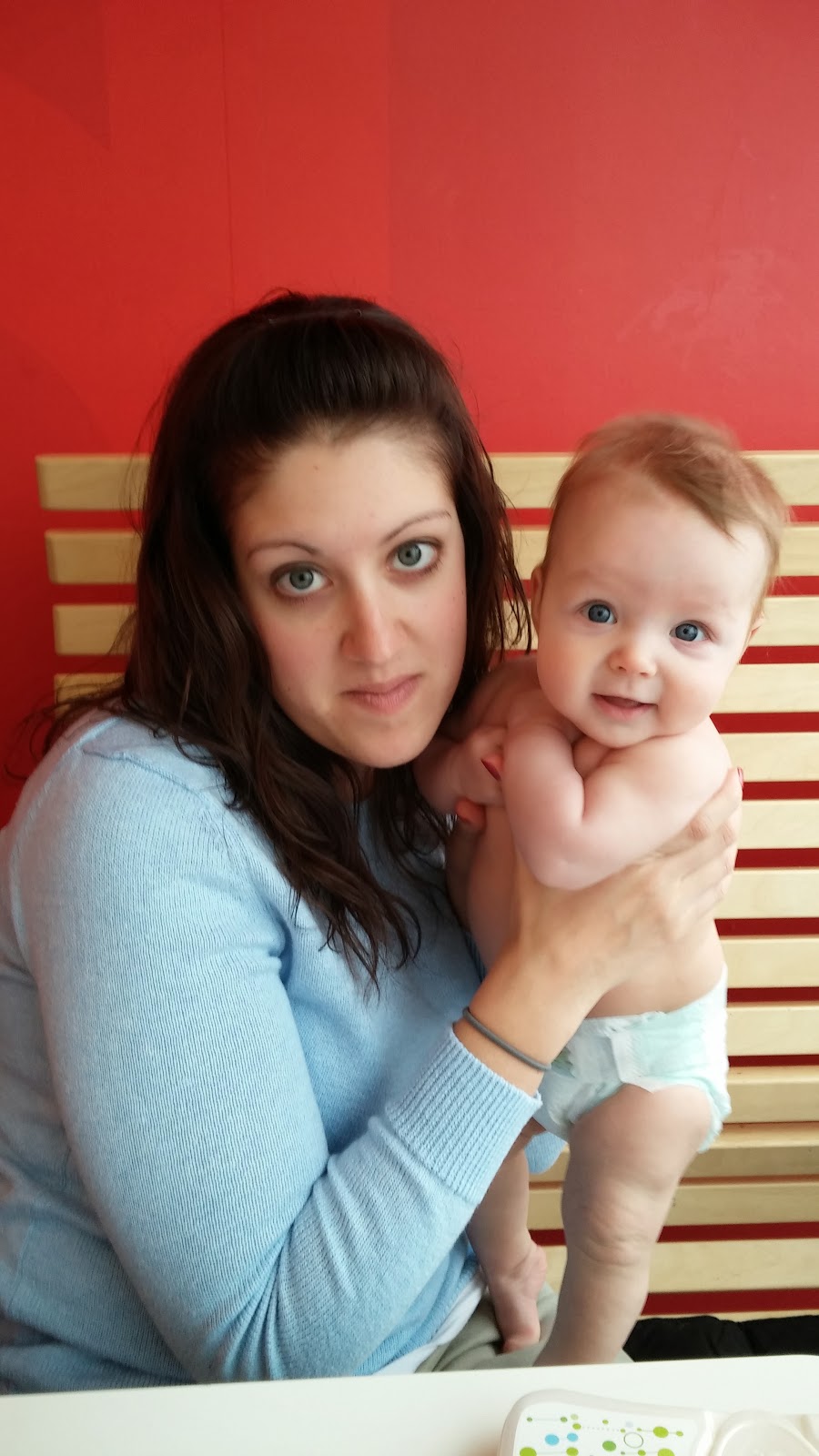 (Success!  Notice, the look on my face here is not an act.  This was right in the middle of the Great Poop Clean-up - hints the naked baby. I was also sad she was going into a backup outfit.)

After cleaning Bean up and feeding her, we powered thorugh the crowds at Ikea.  We found a couple things that we wanted to get and headed to the checkout.  We soon discovered how busy Ikea really was -- the checkout lines were long! We had plans to meet Steve's family at 1, but had to change that to 2.  We checked out, grabbed a hotdog, and continued our journey in Cincy to the old Union Center Terminal.  Bean decided to throw a fit on the 25 min car ride.  I skillfully gave her Tylenol while the car was in motion from the front seat.  She began to calm as we got close to train station, just in time! We met Steve's fam (minus Scott) just in time to make it to a tour of the old train station.

Because we had to delay an hour, I realized Bean's eating time was going to fall right as the tour started.  Luckily, the first part of the tour consisted of hearing about the history while sitting in a meeting room.  I used the opportunity to feed Bean.  She was a little fussy until I got her all situated, and then she cooperated (although I had to stand with her while feeding her).  We had the stroller with us, but ended up parking it for most of the tour.  Bean did great being passed around and eventually fell asleep with me holding her. 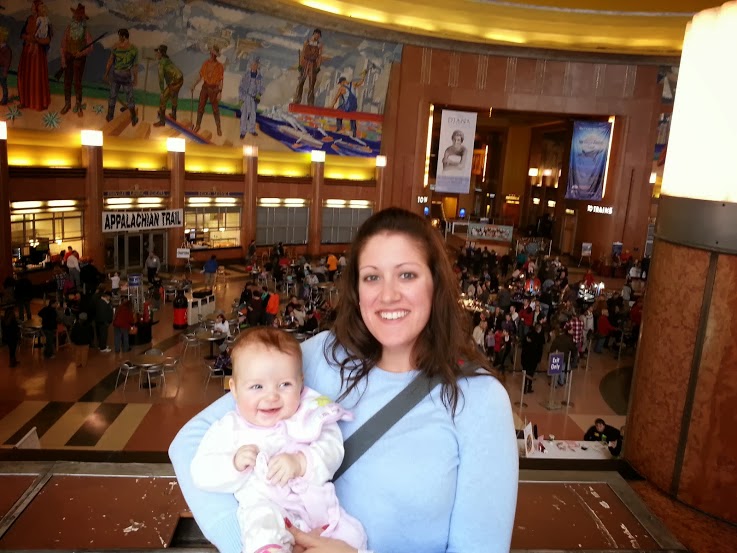 (Learning about the murals in the old train station. )


After the tour, we headed into the history museum within the train station.  Bean was still sleeping while Poppop pushed her around.  They ended up finding a spot to hang out with Mommom while the rest of us went through the rest of the museum.  After we were done, it was getting close to feed Bean again.  We made the decision to just wait longer at the train station, feed her, then head back north to Lima.  We stopped for dinner on the northside of Cincinnati.  I was worried Bean would fall asleep between the train station and eating, so I did my best to entertain and keep her awake.  It worked! 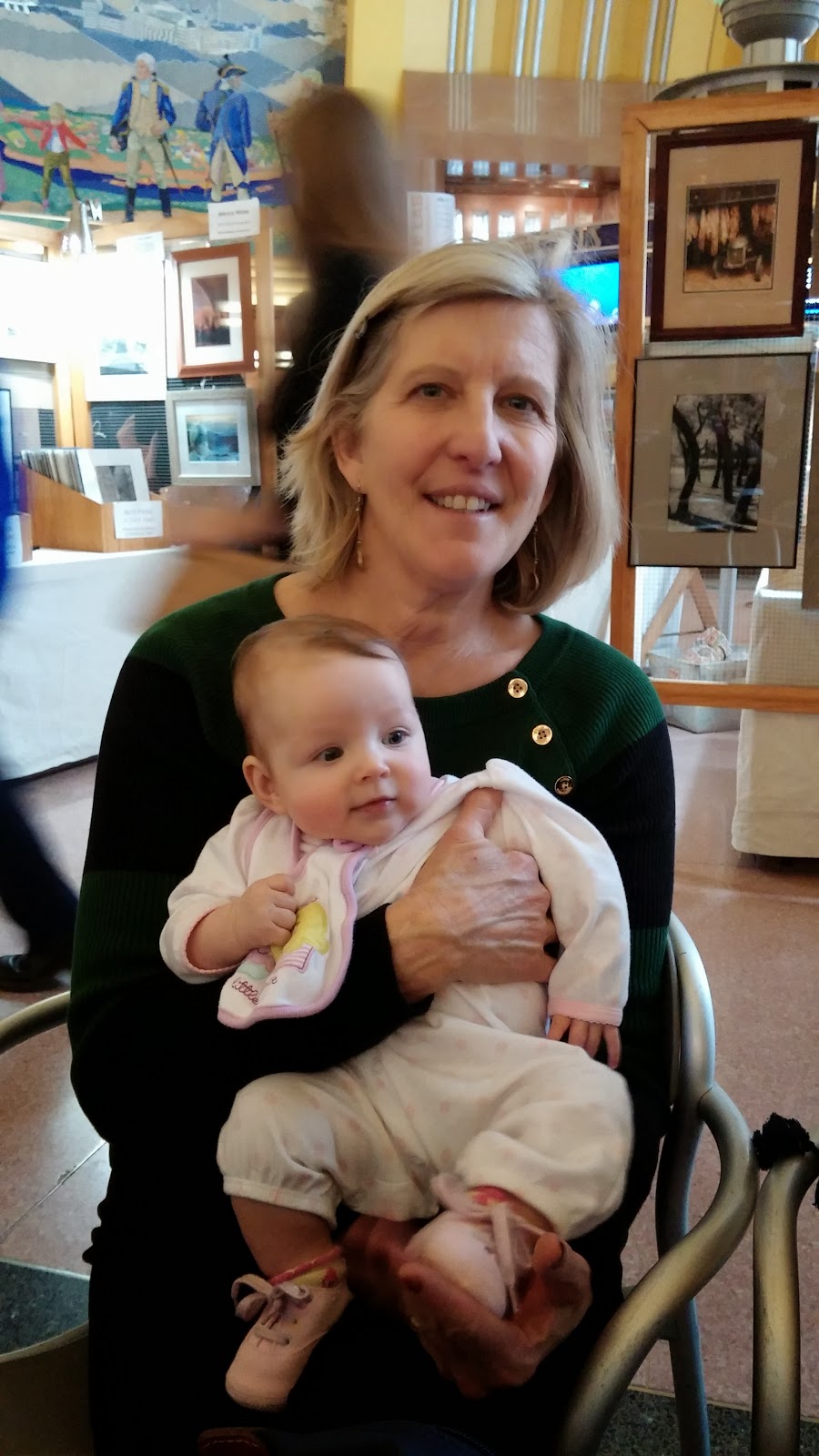 (Bean and Mommom getting in their last cuddles! Note her "back-up" outfit.  I was really concerned she was going to poop though this one, too.  Good thing she didn't! Otherwise she'd have to go back into poop outfit #1.  And for the record, she's wearing shoes because they keep her socks on!)

Everything soon began to fall apart halfway into eating.  We had made the decision to leave her in the carseat while we ate, and she soon decided she wanted out.  She started squirming and grunting, so we crammed down our food and hit the road.  We thought once the car was going, she'd fall asleep and be happy.  Definitely not the case.  She decided crying and throwing a fit sounded better.  I ended up throwing in the towel and giving her some Tylenol, but that ended up doing nothing for her.  Finally about 45 min later, she fell asleep (I had to hold her paci, rub her head, & hold her hand that whole time.  That doesn't sound too bad until I say that i was doing all of that from the front seat!  With the stroller and Ikea purchases in the car, I didn't have the option to pop into the back to sit with her.  We got about 30 min of silence before she woke up and started squirming again. We were 15 min from home and just powered through.

When we got home, I took her out of her seat and discovered she had another pretty full diaper.  I'm not sure if she was so fussy in her carseat all day because her tummy hurt or if it was because she had a dirty diaper.  All I know, is that bedtime couldn't come soon enough!  Bean got a bath, was fed, and fell to sleep quickly!  The busy weekend really wore her out!  She was able to recuperate on Monday, but got her shots for her 4 month appointment on Tuesday.  Poor girl!
Posted by Unknown at 9:25 PM