This past week/weekend marked the longest time we were apart as a family! Steve had some business to attend to in Knoxville, TN.  As tempting as it was to go on his little business trip with him, the thought of entertaining Bean in a car and hotel room for 3 days wasn't too appealing.  Instead, she and I headed to Indiana for a few days!

Indiana trips always seem to fly by.  We left Lima Wednesday morning and got into Kokomo around lunchtime.  Bean decided she did not want to wait to Ahm & Abo's house to eat, so instead, I had to park in a parking lot to feed her.  That was a first!  The rest of the afternoon was spent chilling with Ahm & Sara (we even made a quick trip to Sara's school).  Abo was busy with a crazy work project, but we did see him later that evening.

Thursday was a pretty big day for Bean.  She got to meet another one of her "adopted grandma's" -- Mrs. B! Bean warmed up to her pretty quick and cuddled with her while mommy and Mrs. B chatted away.  About the time she headed out, Gabbie & Aunt Amber showed up!  Gabbie and I dove into playing with all my old Barbies while Bean shared in Aunt time.  Later in the afternoon, my friend April came over and brought a friend visiting from Israel!  Bean got to meet so many new people this trip! 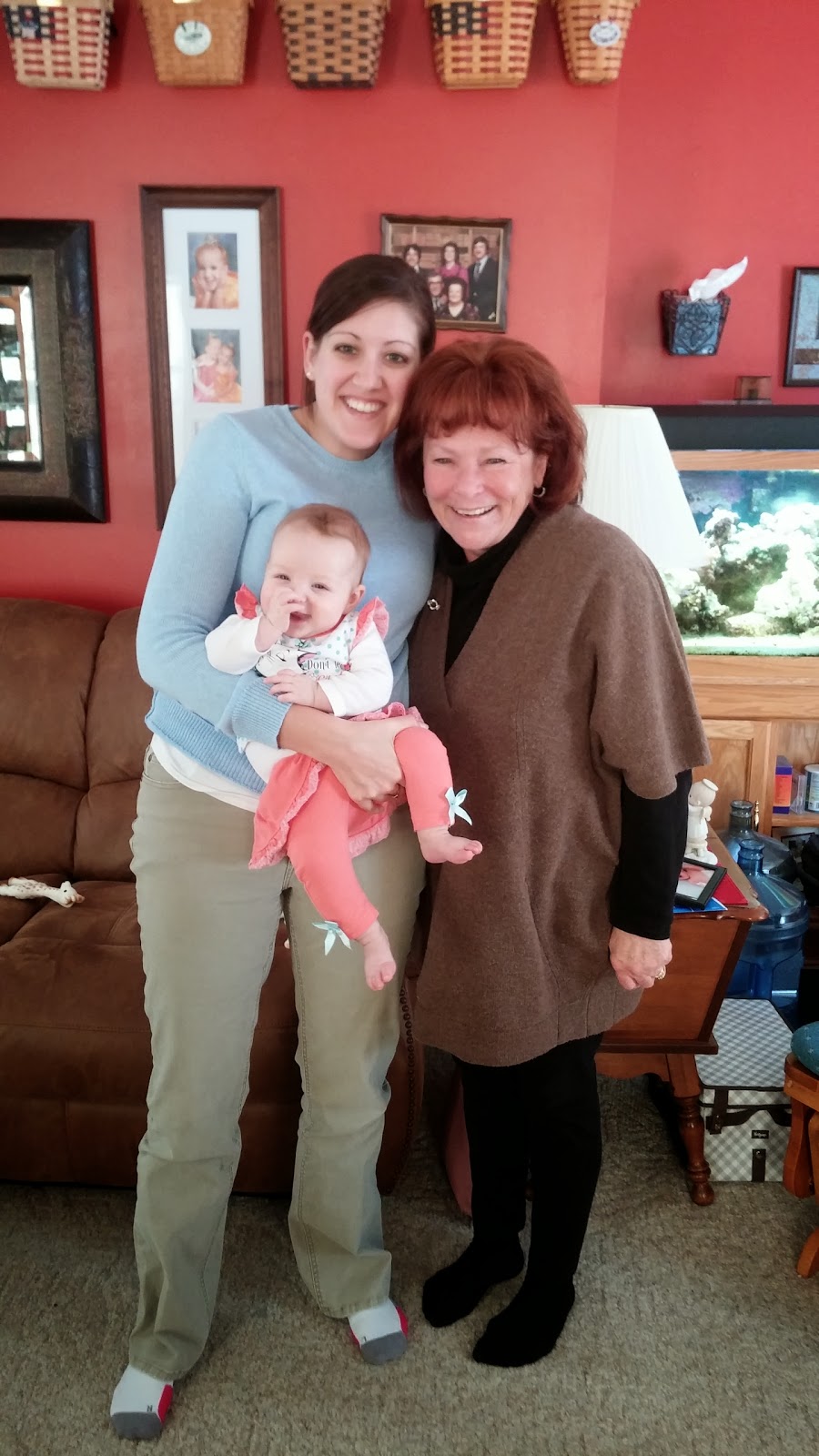 (Mrs. B! Who would have known the lasting friendship I'd have with my 7th grade history teacher?!  This lady is truly a precious gem!) 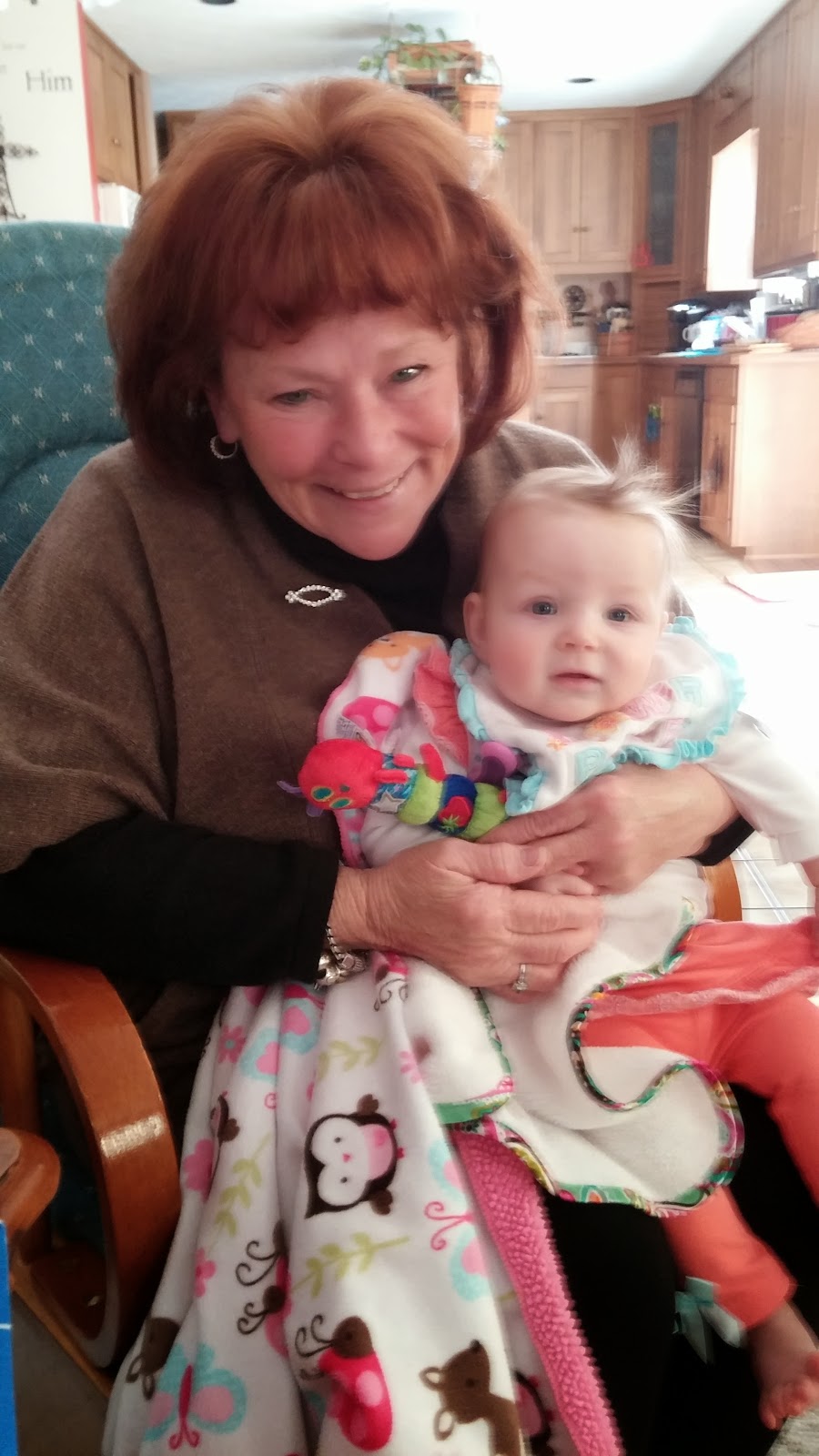 (We like to call her GranBerry, especially since she now claims Bean as her own!)

On Friday, I got to have some me time and went and got my nails done!  I got a new gel polish kit for Christmas and have been doing them myself, but I wanted to see how to do some nail design and also just wanted to be pampered!  Bean hung out with Ahm at the dentist while Sara was getting some teeth worked on.  I heard she was the office hit and of course showed off to everyone! After our appointments, we reunited for some lunch then went back to my parents for the rest of the afternoon.  Nieces showed up after school and we all hung out.  The evening seemed to fly by!  Mom & I made some Galushta so that I could take it to an international dinner at our church.  We started after Bean went to sleep and it only took a couple of hours.  Thanks mom!

Saturday, I woke up early and was out of the house by 7am!  My brother picked me up and we headed to a piano contest to judge.  When I was younger, I actually participated in the contest.  You go in and out of rooms and play prepared pieces according to the event (Hymns, patriotics, etc) and a judge grades your pieces.  You acquire points and earn trophies throughout the years.  Back in college, my teacher called me up to see if I wanted to help out and judge.  I've done it off and on for the past 5 years and love it!  It's neat to see the other side of the process and help kids develop their piano skills.  This was going to the longest time I was going to be away from Bean.  I had it all set up for my mom to just bottle feed her all day while I was gone, but during my lunch break, I decided I needed to feed Bean for my own comfort!  My parents brought her and I was able to feed her while my sister filled in my judging room (She was judging, too.  She was actually placed with a co-judge, so she was able to leave her room for a bit). 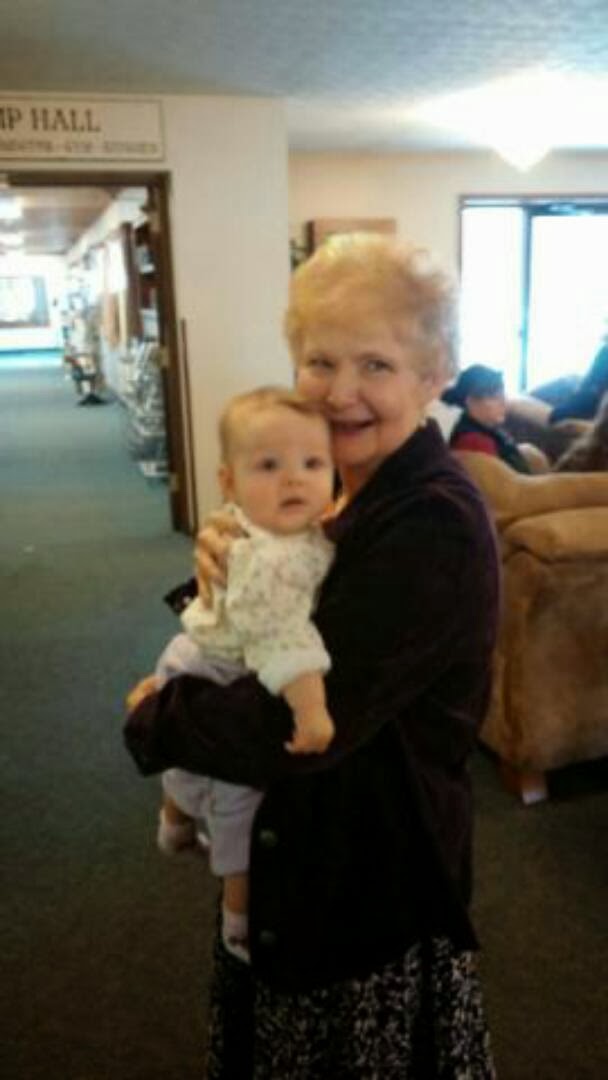 (Bean & Ms. Margie.  Margie was my piano teacher and hasn't changed since the first time I met her!  She is another one of Bean's adopted grandmas.  A girl can't have too many grandmas, right?!)

Judging finished up around 3 and I headed back to my parents' to change and quickly pack up the car.  It worked out that I got to feed Bean before we headed out.  Our trip back was uneventful and went smoothly.  We were hitting a small town about an hour before home and it was around the time she should eat again.  I chose to wake her up and feed her (while feeding myself!).  It was hard to take care of feeding her and myself at the same time.  I tried to make it simple by eating nuggets and fries.  I knew it would be impossible to eat a burger one handed (even though I prefer burgers over nuggets!).  Oh well, just chalk that one on the list of things I do for Bean.

As much as I did not want to leave my family in Indiana (or drive at night!), it was good to be home and out of the car.  Especially since Bean felt the same way the last 30 minutes.  She made her presence known in the car by lots of whining.  Once we got home, she was all smiles with daddy. After some playing and cuddles with him, she got a quick bath and bedtime!  Woooooohooooo!!
Posted by Unknown at 11:35 AM