Bean and I got the chance to meet up with Amber & Gabbie for a trip to the zoo earlier this week.  Gabbie had a preschool field trip to the Ft Wayne Zoo, which is just over an hour away.  We couldn't miss the opportunity to spend the day with them!

Bean and I got up, loaded up the car and headed north to the zoo.  Bean "talked" the whole way, even though she should have been sleeping.  Oh well.  She fell asleep for the last 15 min.  I tried to keep her asleep as I transferred her to her stroller, but she was too excited about what was going on.  It was quite cold and drizzling when we got to the zoo.  We feared a miserable cold day ahead of us, but halfway through the day, the sun came out and it warmed up!  Bean was quite warm and bundled in her stroller, but I was sure excited for the sun!

Even though it was a preschool field trip, we got to do whatever we wanted at the zoo.  We didn't have to stick with any group or do certain things.  We kept calling it "Gabbie Day", because she got to pick whatever we did.  The zoo is set up in "loops".  So we'd let her pick what animal she wanted to see, and we'd do the loop with it.

We started with the sea lion show, then headed to the orangutans (rain forest loop).  After completing that loop, we were hungry and decided it was time for lunch.  However, we went ahead and let Gabbie "check" off her Pony ride.  She picked the biggest pony and held on as Amber walked her around the path.  But first, the pony was thirsty and stepped on Amber's foot to get to the water- ha!  Good thing it was just a pony and didn't put its full weight on her foot.  That wouldn't have made for a fun day!

After eating a cold lunch (it was windy and the sun was still hiding), we headed back to the animals.  Gabbie chose to go check out the bats and fish (Australia loop).  After completing the loop, we had just one more loop left - Africa.  Gabbie was begging to feed the giraffes, and could barely wait to get there.  When we got up to the feeding patio, it was closed.  Gabbie was crushed.  We sort of meandered around the giraffes (mainly because the male giraffe was getting frisky and Amber and I were like little kids watching what was going on).  Our curiosity worked out to Gabbie's advantage, because we noticed that people were on the patio feeding the giraffes!  Gabbie got to "check off" another item on her zoo list.

The sun had come out and we decided it was time to take a little break and eat some ice cream.  We had to walk all the way across the zoo to find our snack.  After recharging our batteries, we went to the little petting zoo/farmyard.  Gabbie loved brushing the goats.  The barnyard area was the last area to walk through in the zoo.  It happened to be feeding time for Bean, so I fed her while Amber and Gabbie scoped out the gift shop (her last "check off").  We all finished up at the same time, and decided we just weren't ready to leave.  We decided to go check out the orangutans one last time before heading home.

So what about Bean??  Bean did great!  Amber held her a lot and would point out the animals to her.  She'd get excited, blow raspberries, smile big, and bounce up and down.  She took a nap after lunch in the stroller, but other than that, she was just watching everything going on.  I think her favorite part was playing on drums.  There was an area with drums in the Africa loop, that we let her play with, and she loved it!

We had such a good time!  Bean was asleep before I even got out of the parking lot, I guess that means she had a lot of fun.  She slept almost the whole way home.  We just barely got home before Steve!  He noticed that her cheeks were pretty pink.  Not sure if it was from the wind or sun, but they stayed pretty pink through the next day.  I made sure to keep an ointment on it just in case ;-). 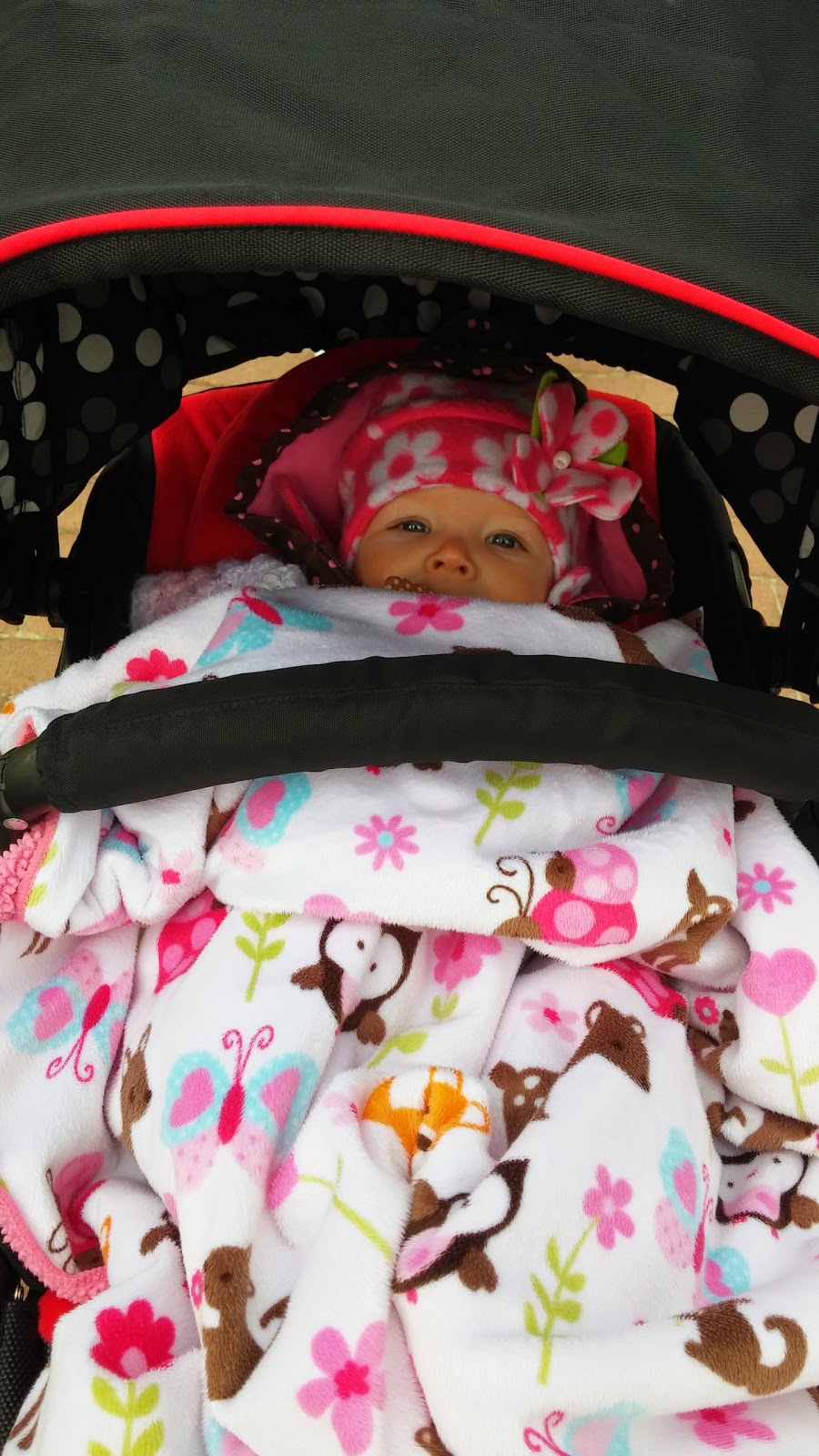 (Brrrr.  Bean had the best spot -- snuggled under blankets in her stroller.) 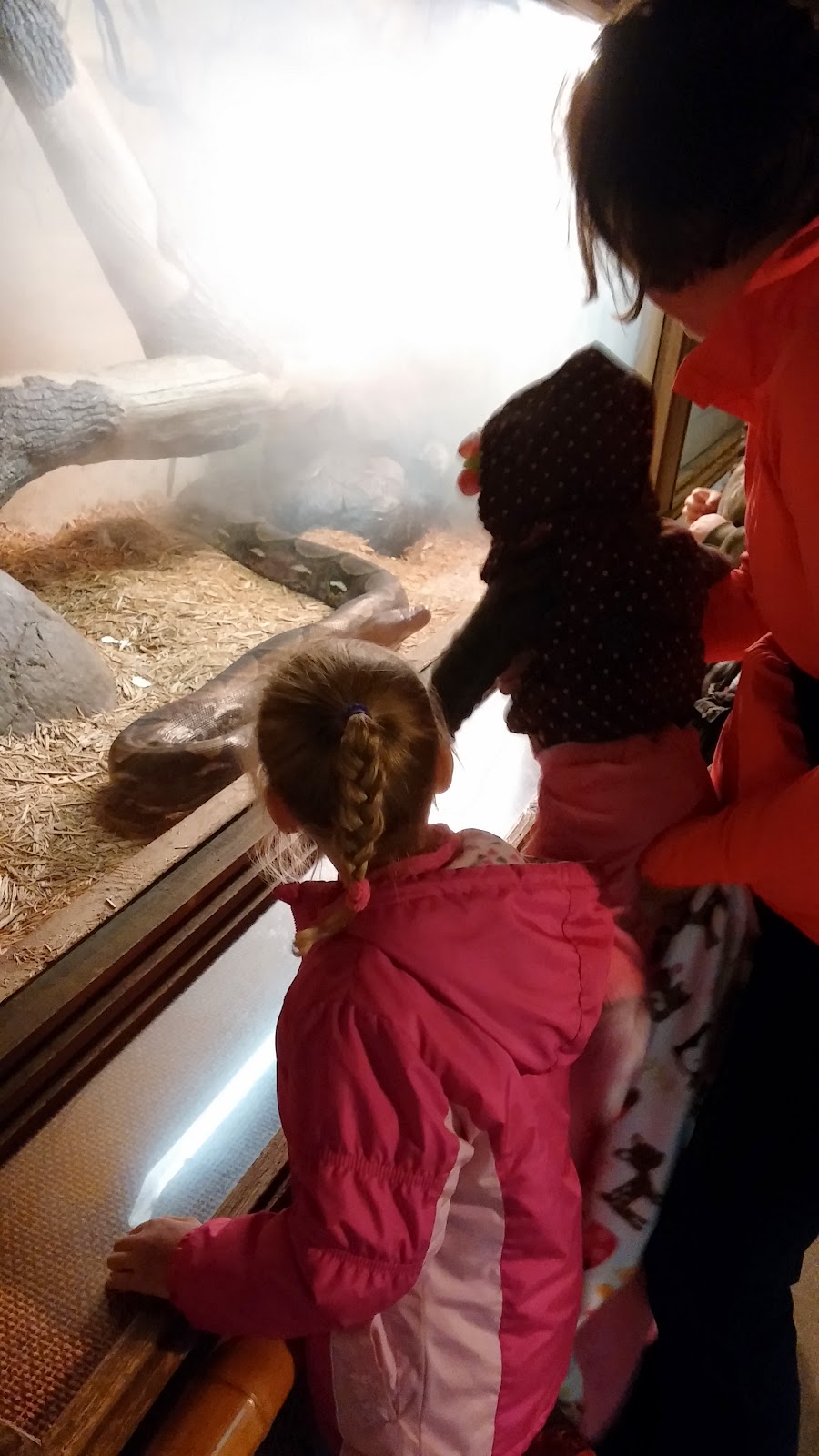 (Checking out the python.  Bean did a lot of bouncing watching the snake. eeeks!) 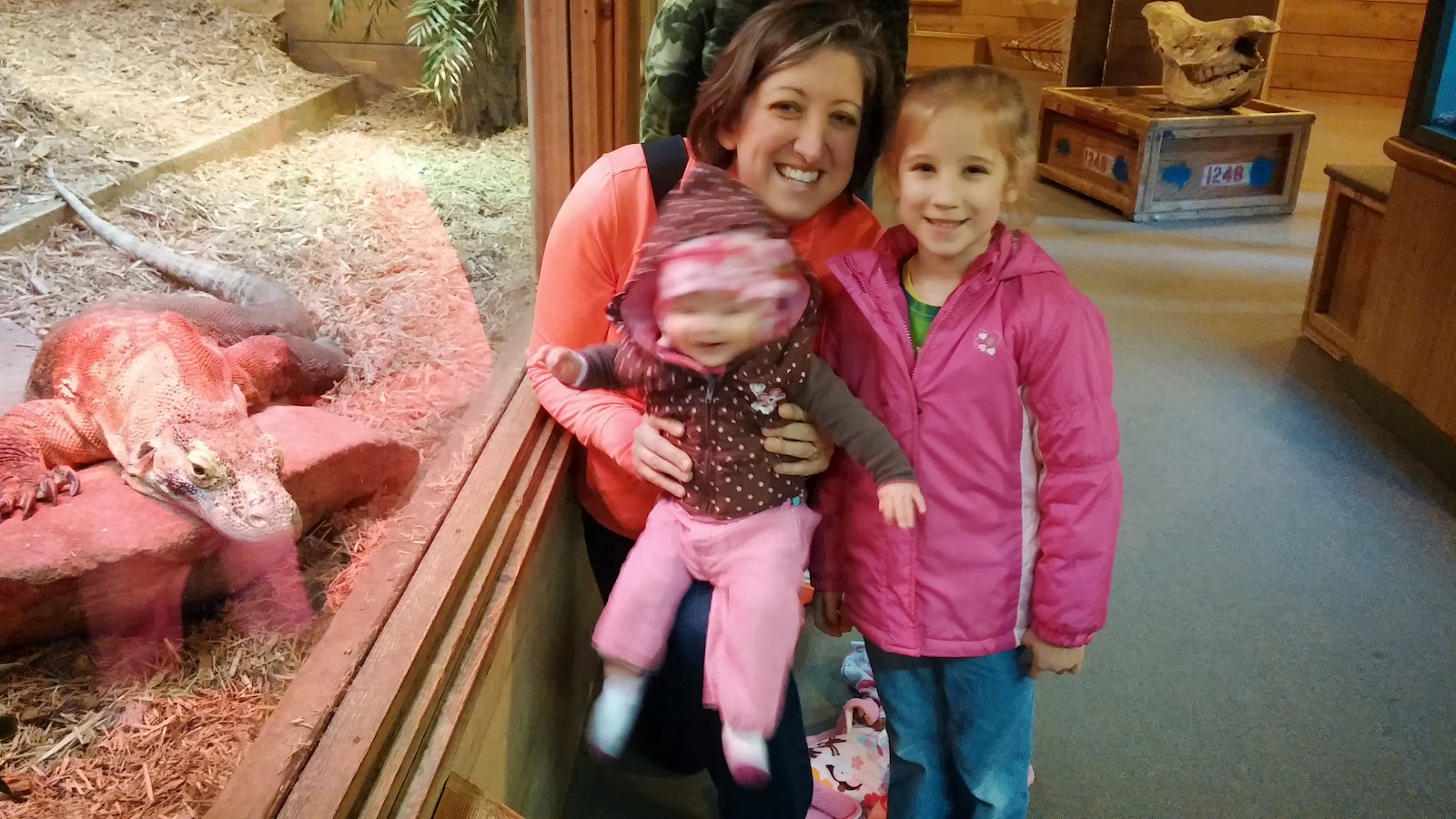 (Too excited to stay still!  Checking out the Komodo Dragon.  Gabbie loved the "dinosaur" so much, that she got its picture on a penny press.) 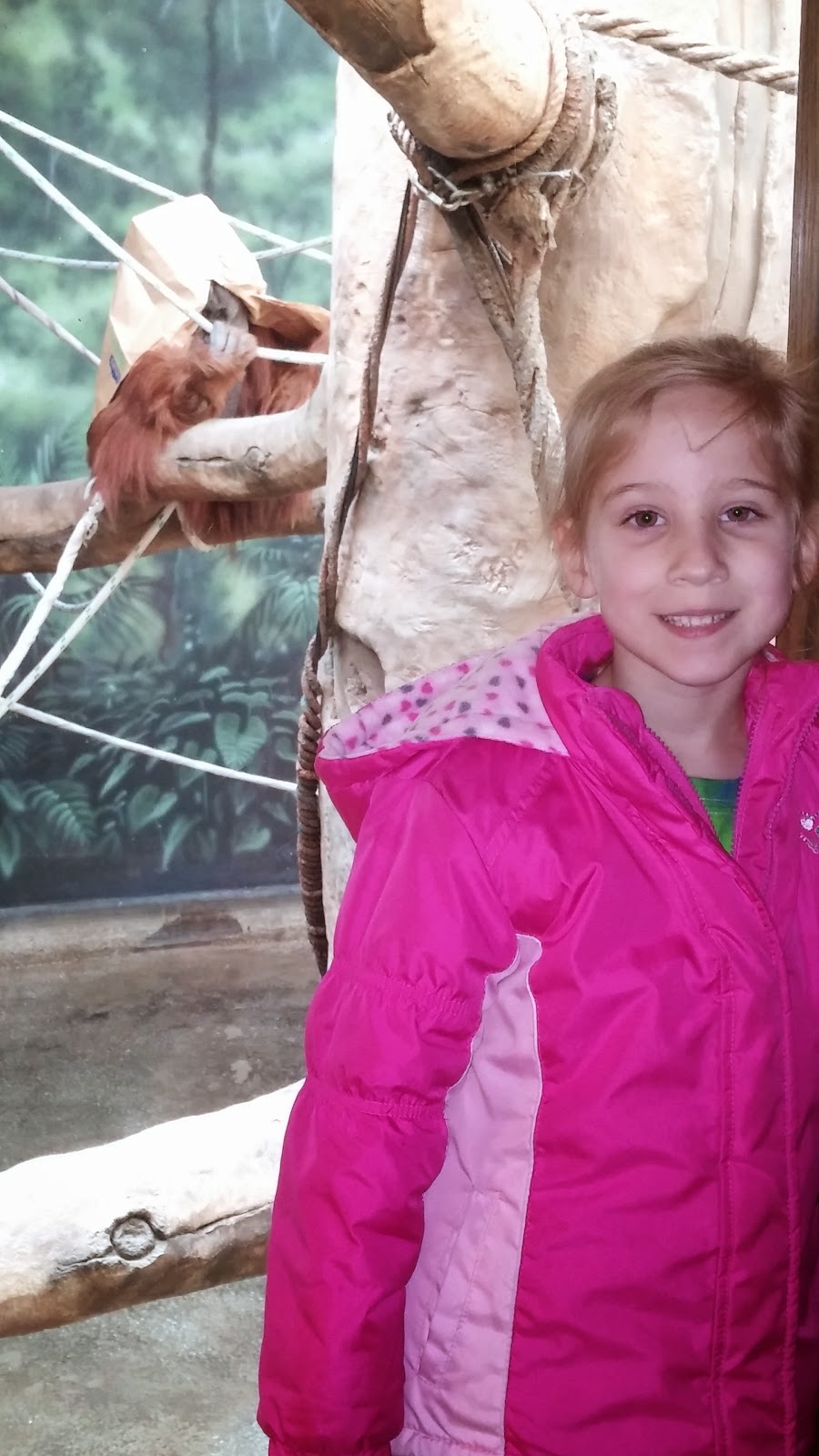 (Orangutan!  The male orangutan loves to put things on his head.  Today's "hat" was a grocery bag.  We even saw him move later, by swinging on the ropes to move to a different spot.  He held the bag in his hand as he did it, and once he sat back down, he swung it back up on his head.  So strange!) 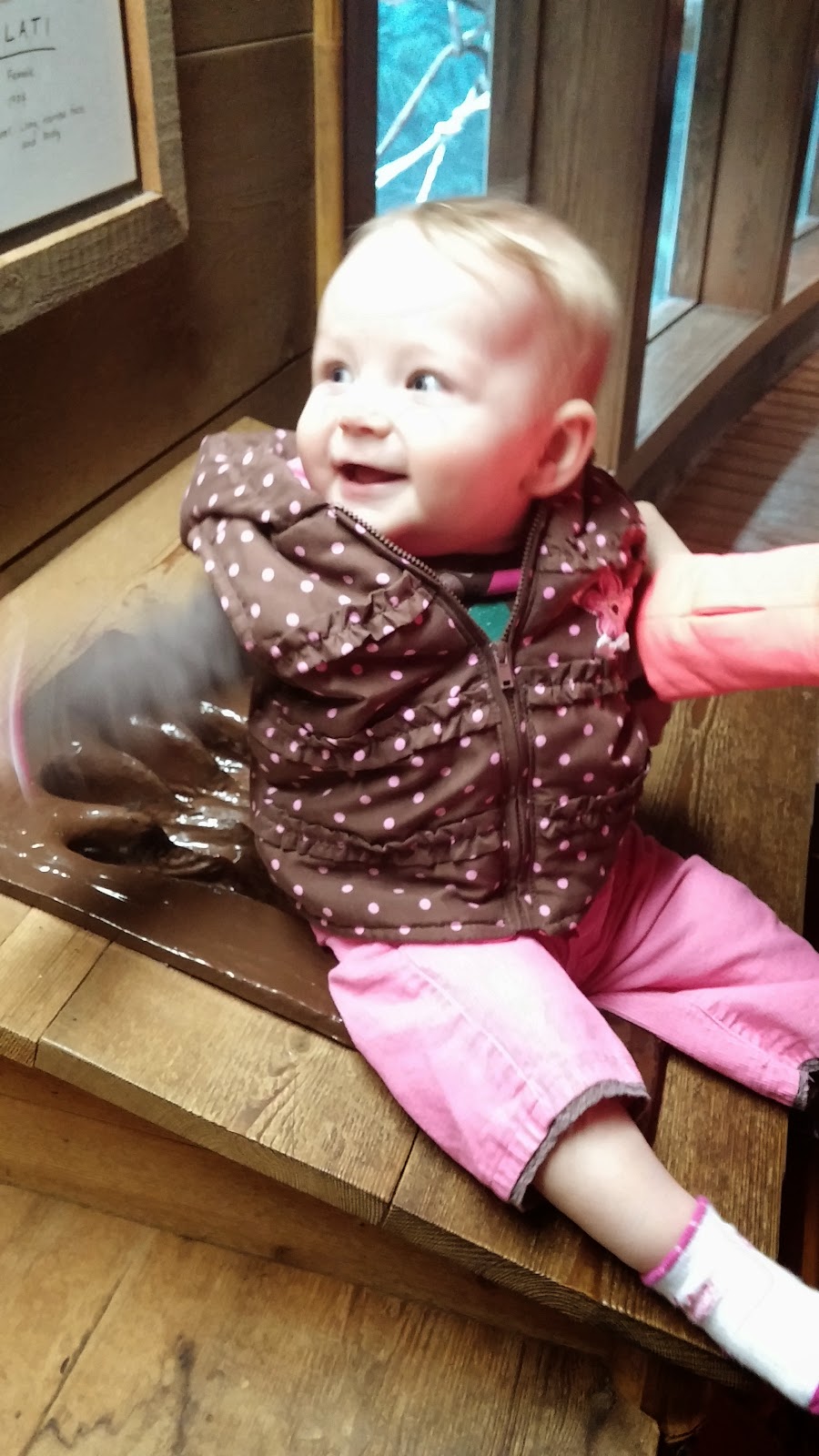 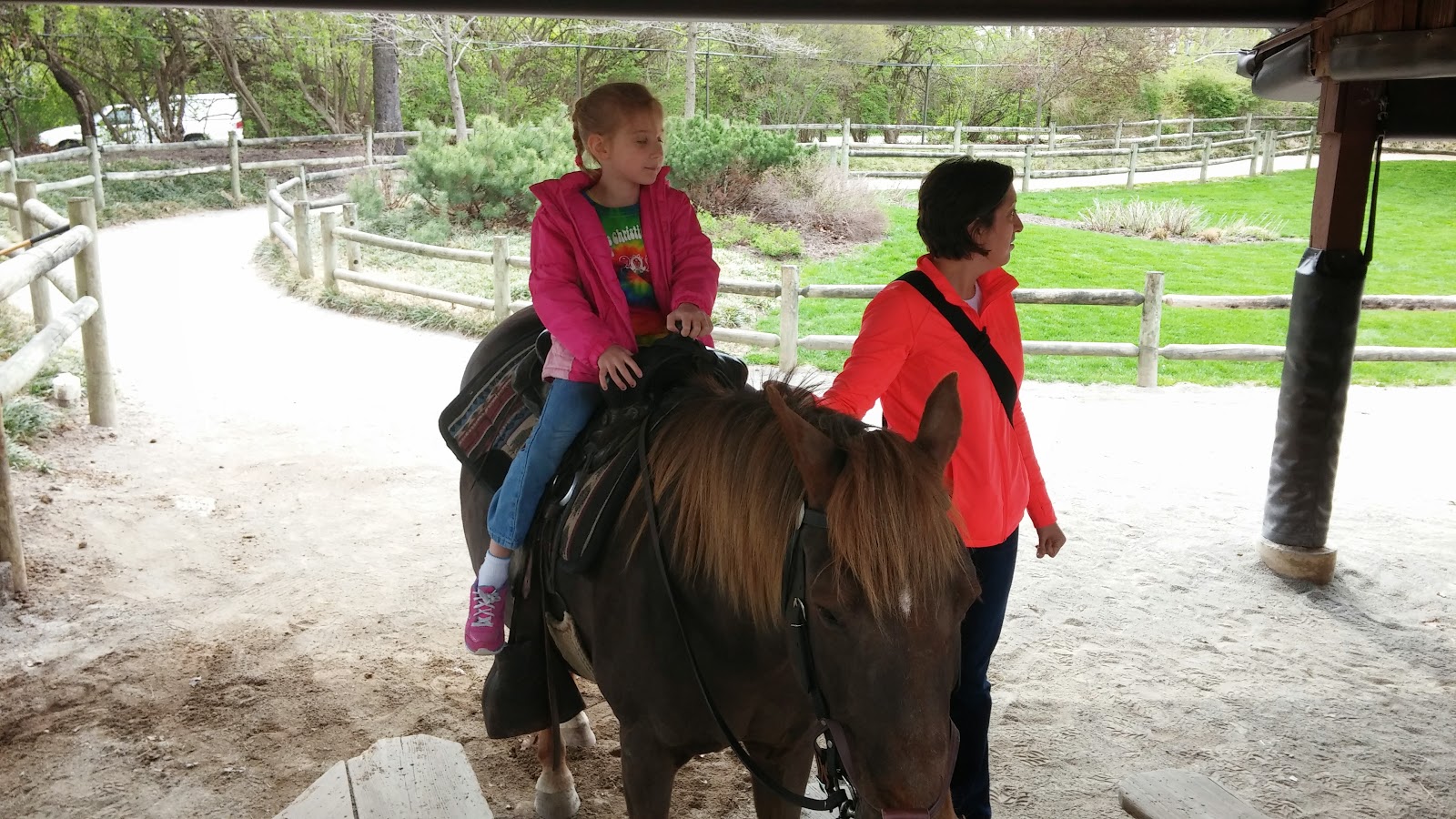 (Gabbie waiting for her pony ride.  This was before it veered off the trail, stepped on/over Amber, and got a drink of water - ha!) 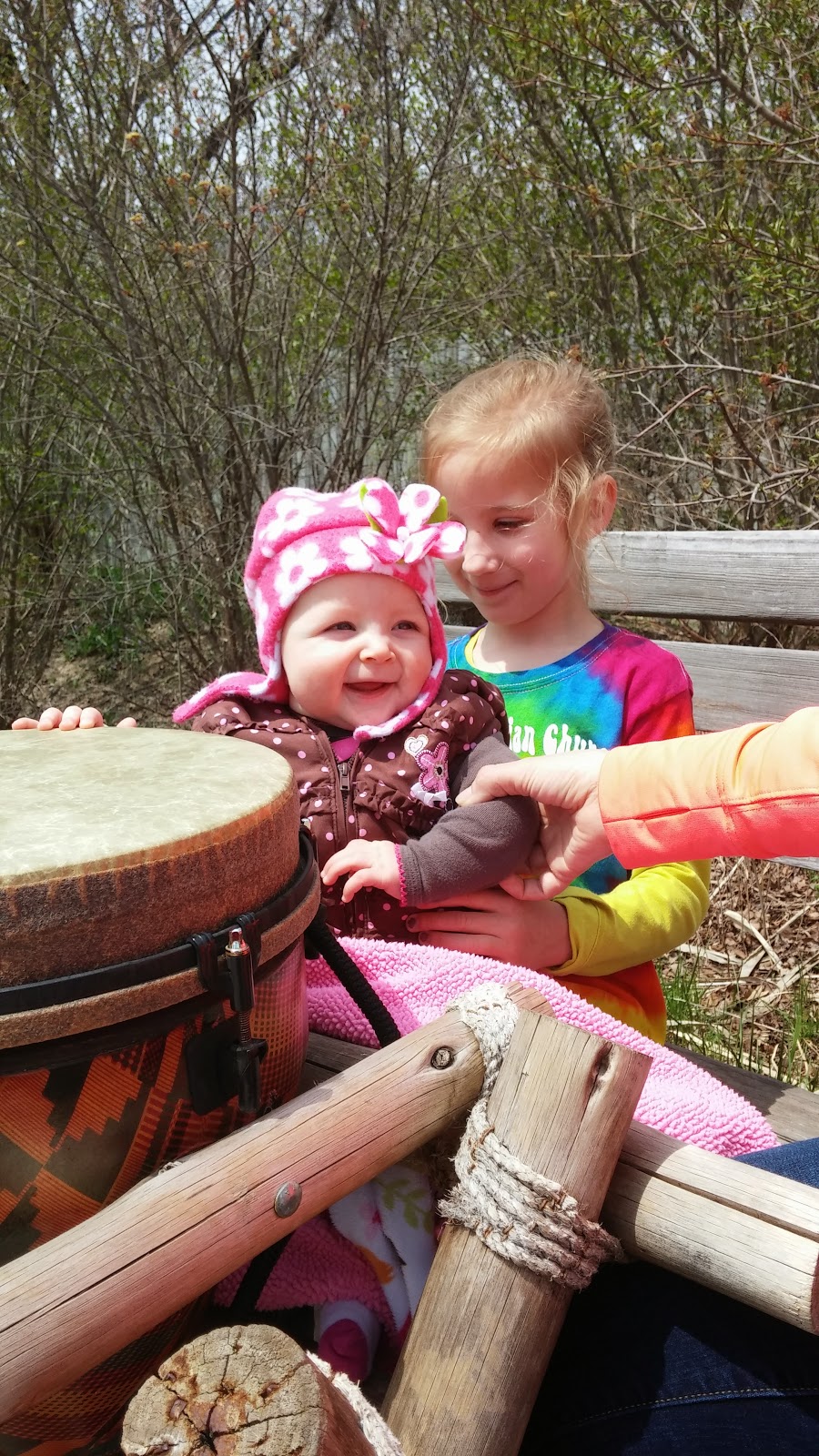 (Playing the drum and having a good old time!) 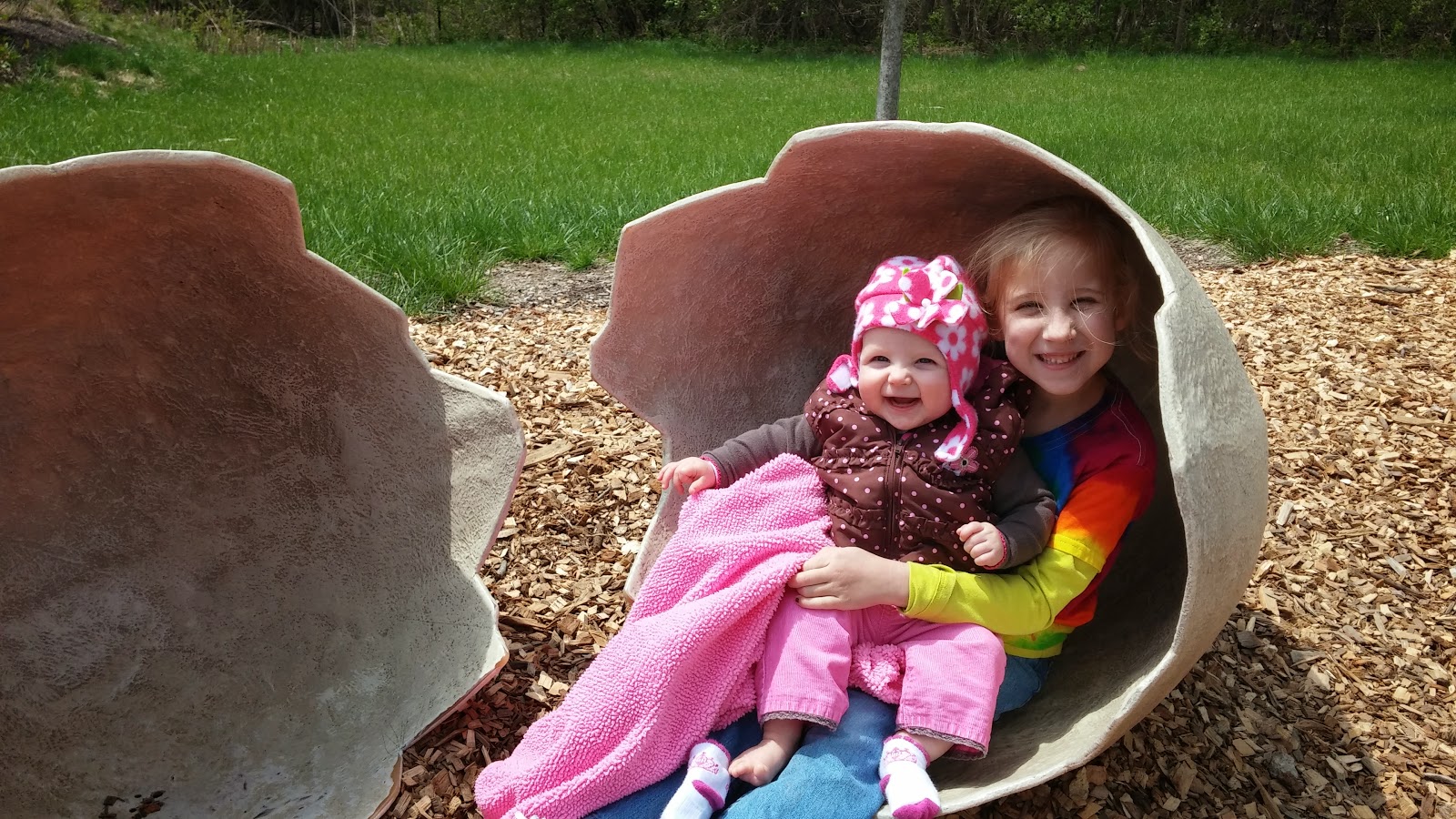 (Look at those cute chicks hatching out of the eggs!) 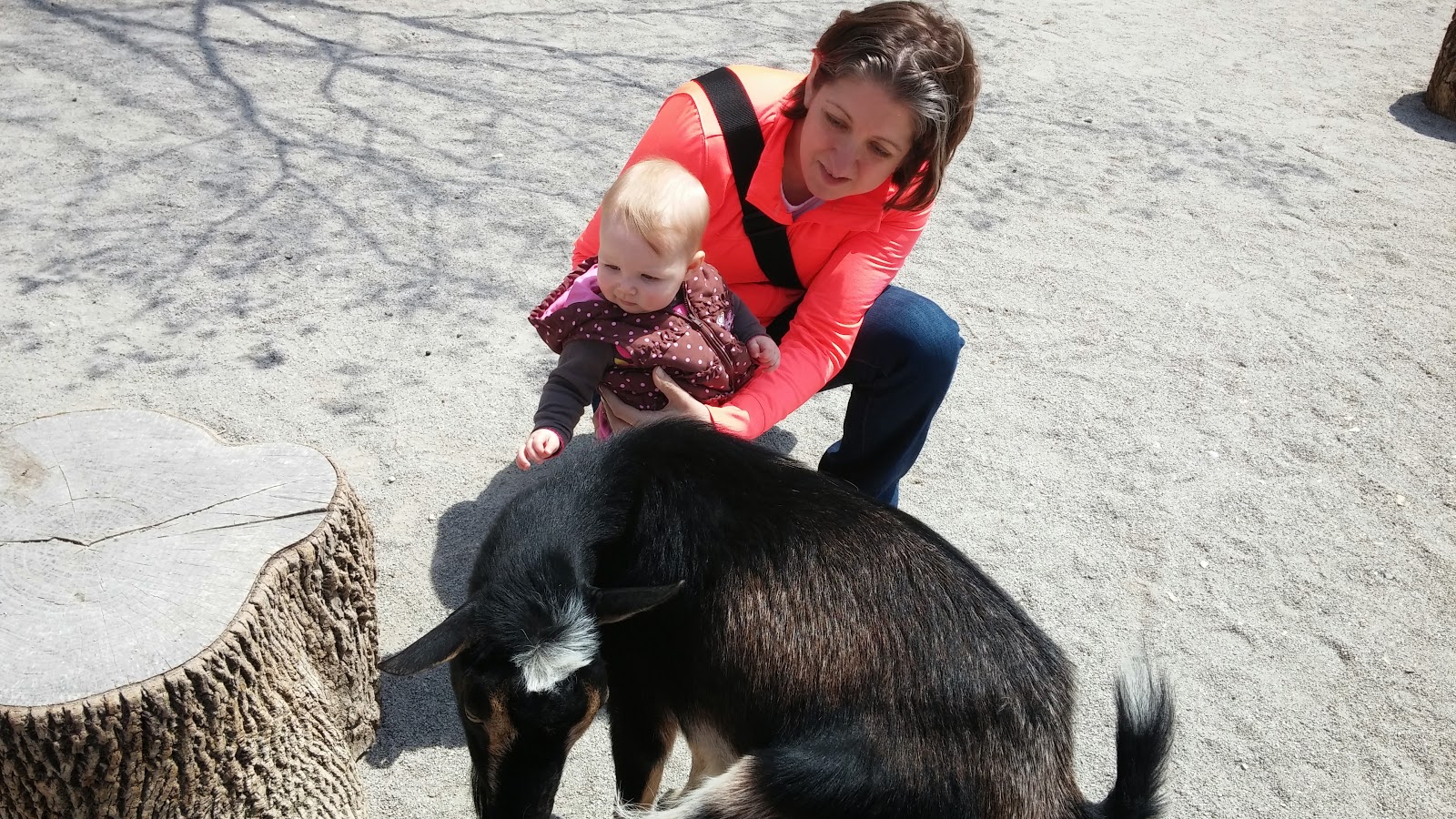 (Bean petting a goat! We gave up on the sock fight by this point.  She got to just put her bare feet on the goat and thought that was funny.) 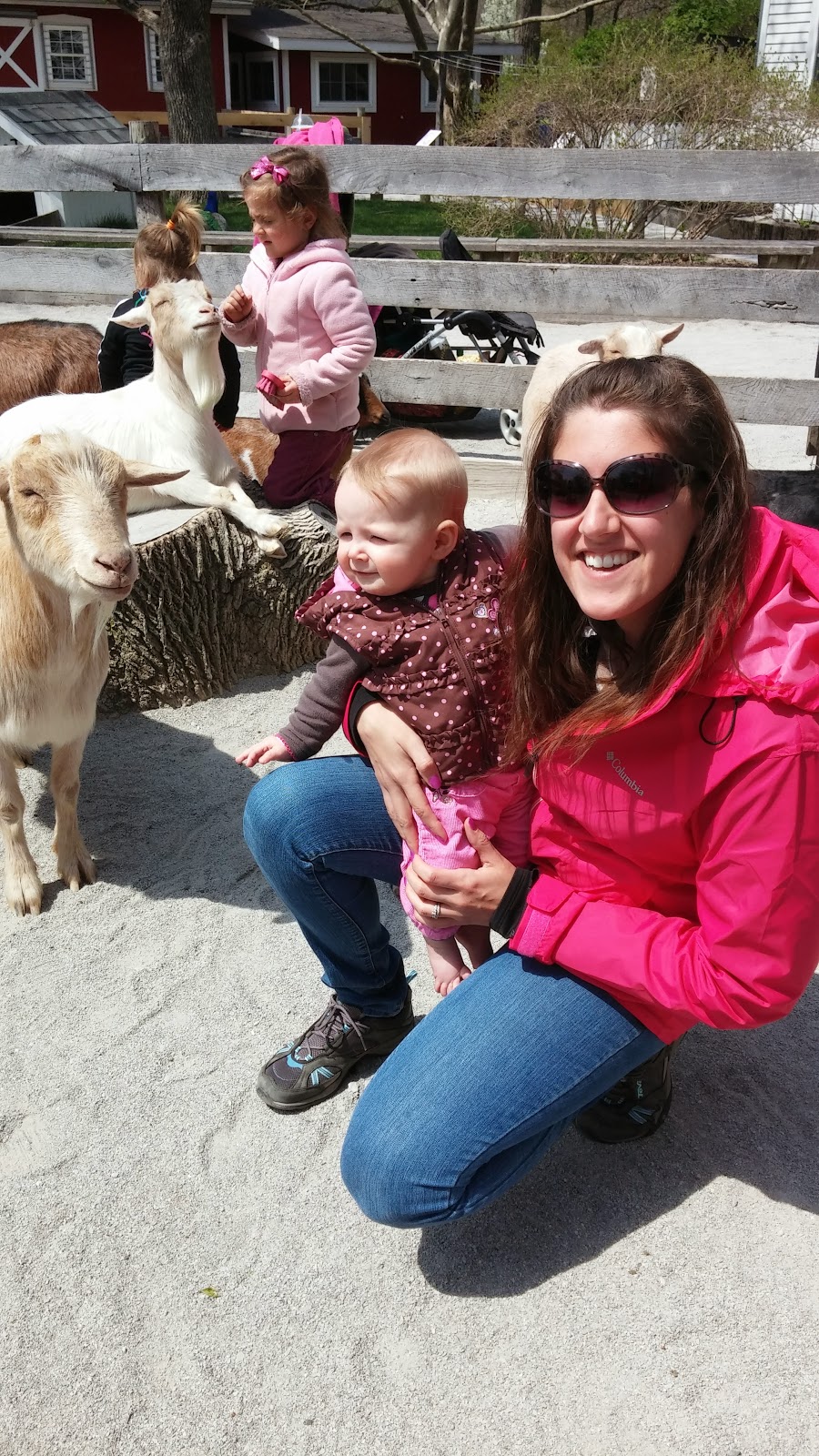 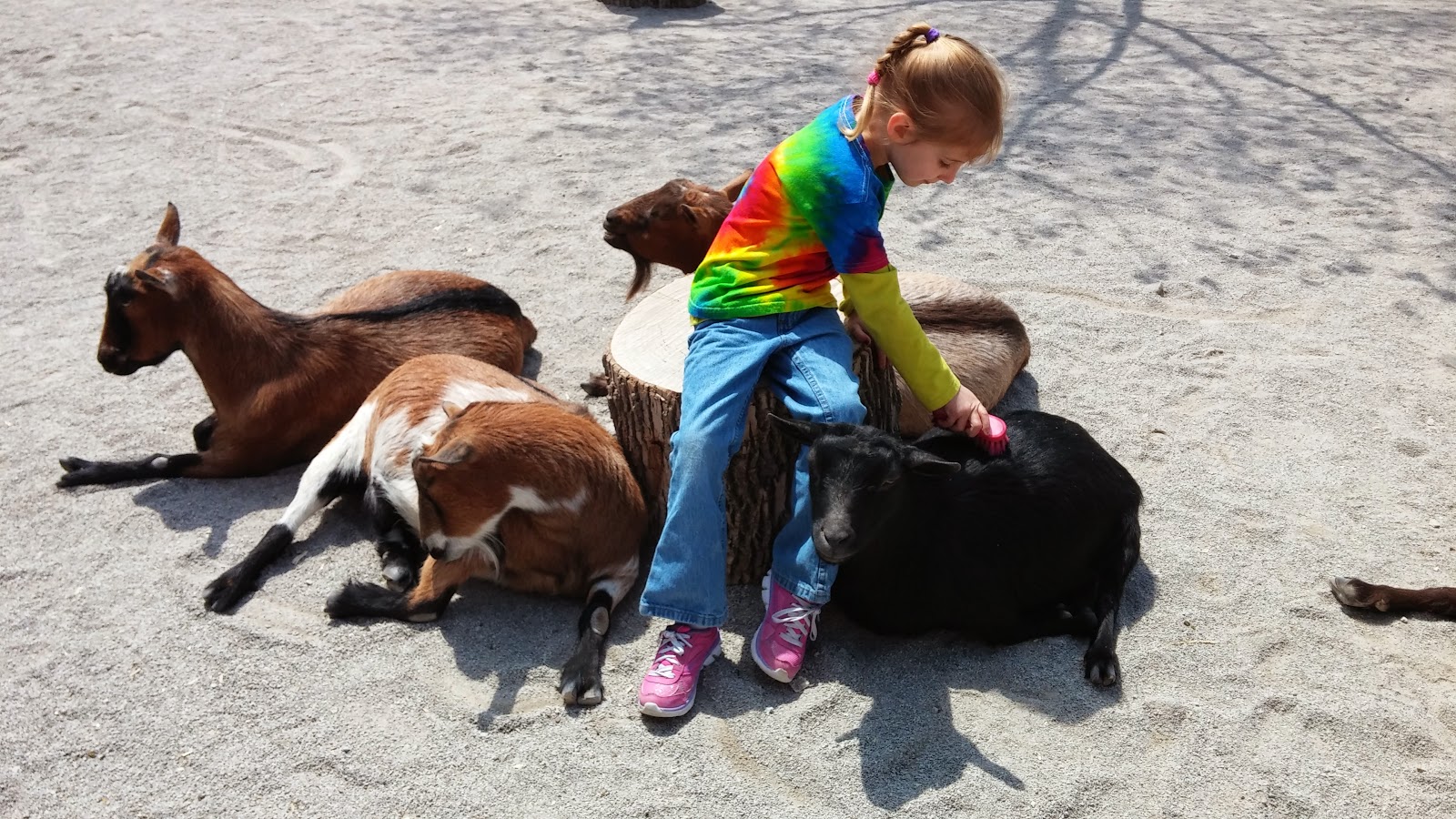 (Gabbie said it was the best day ever.  She got to do everything she wanted, and didn't have to fight for turns.  By afternoon, the zoo was pretty cleared out.  These goats were loving all the attention.) 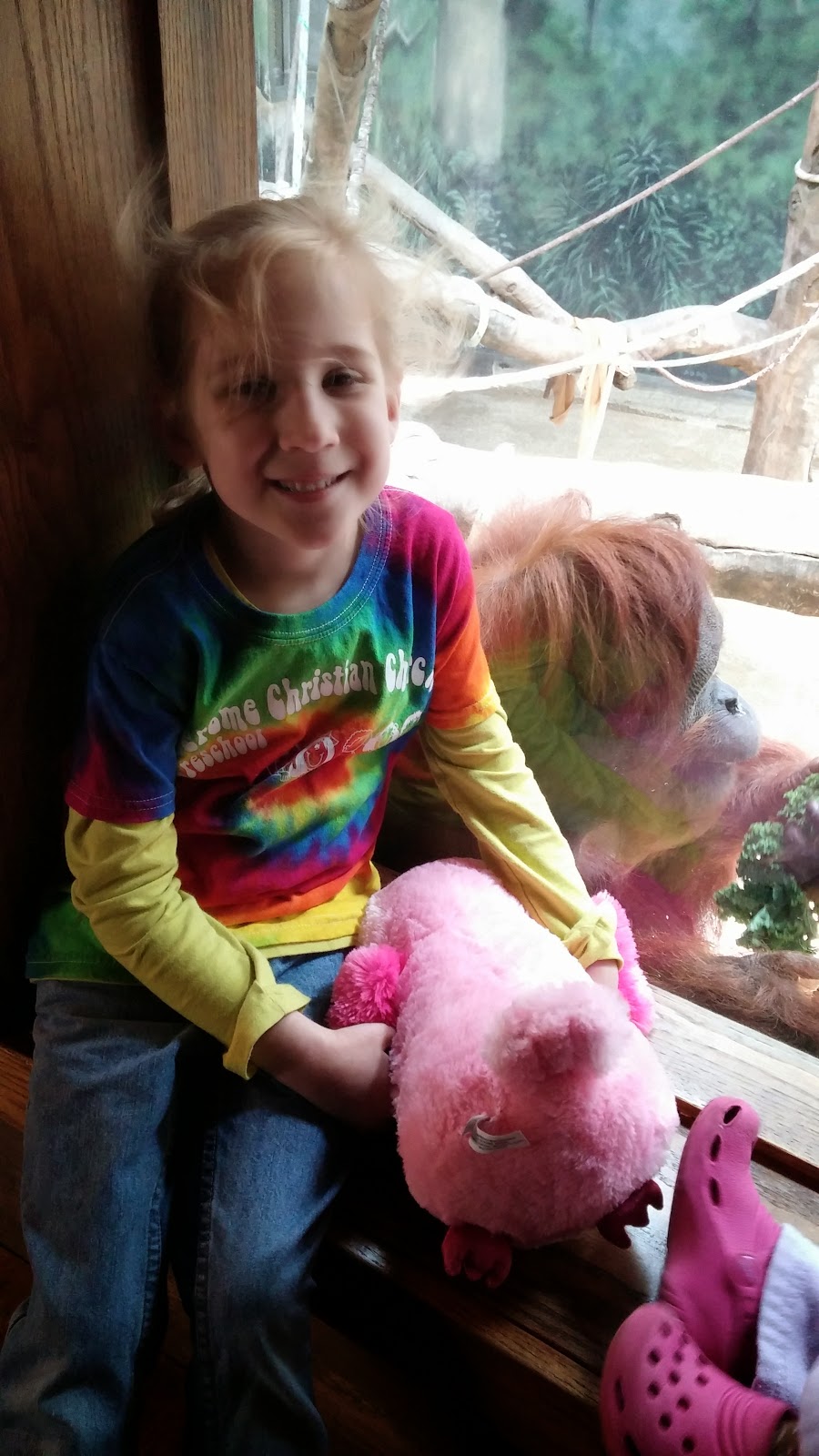 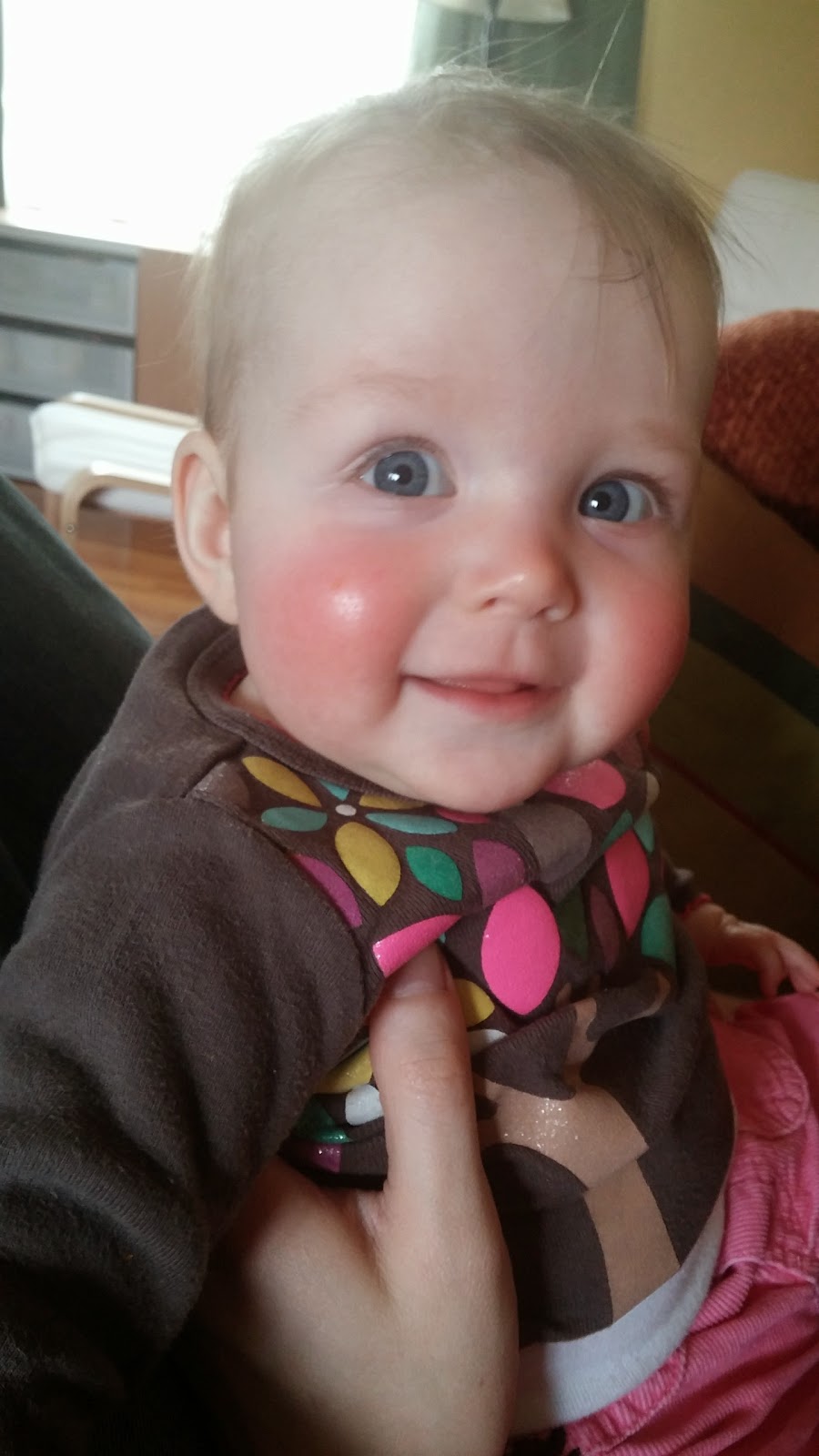 (Look at those rosy cheeks!  Bean loved the zoo and can't wait to go again!)
Posted by Unknown at 4:45 PM