A couple weekends ago, we loaded up the car and headed to Columbus for a weekend with our good friends - Mitch, Alice & kiddos! Our first stop was meeting up at our favorite pizza place - Dewey's Pizza. 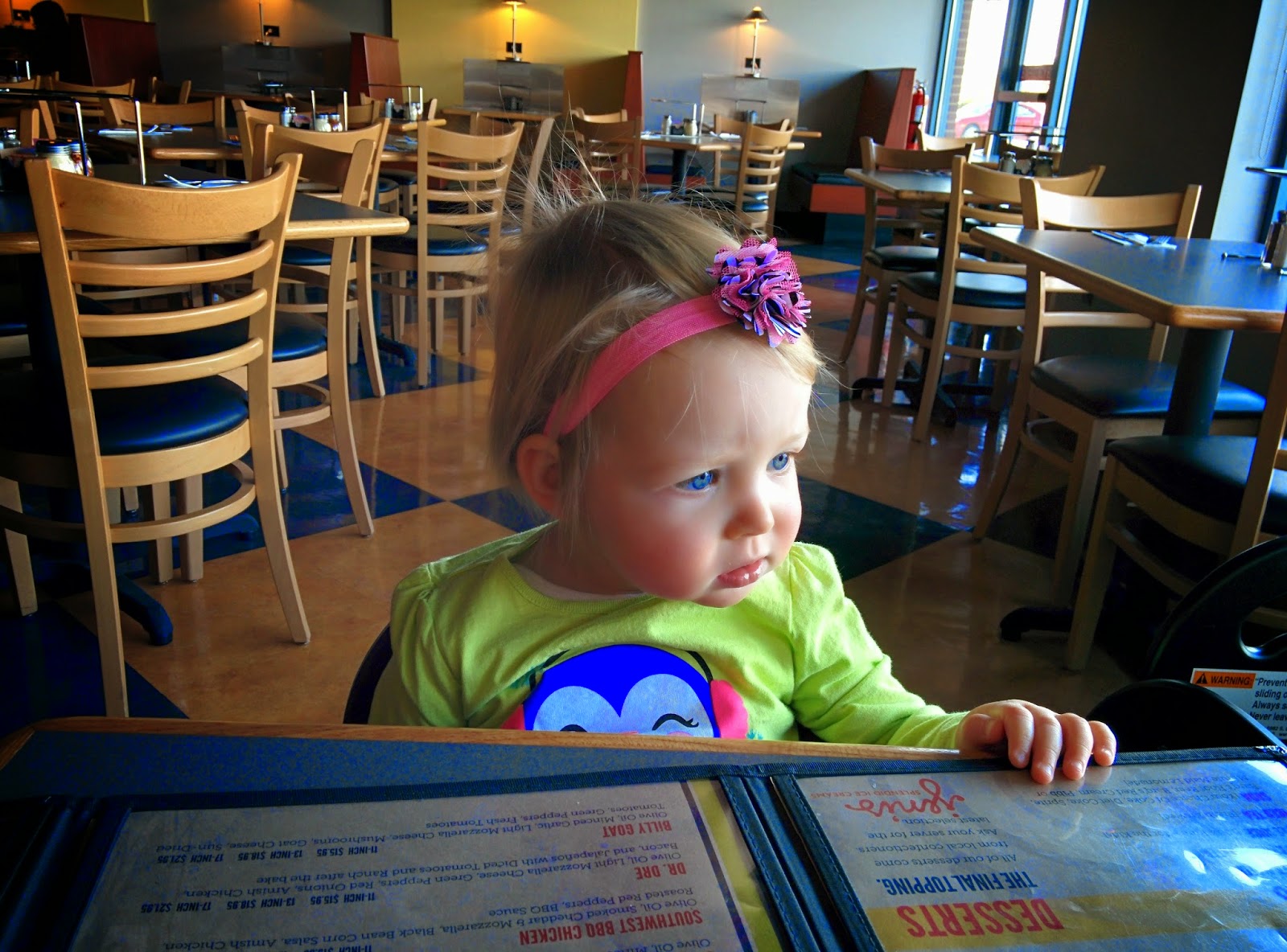 (So many pizza options, which one to choose?) 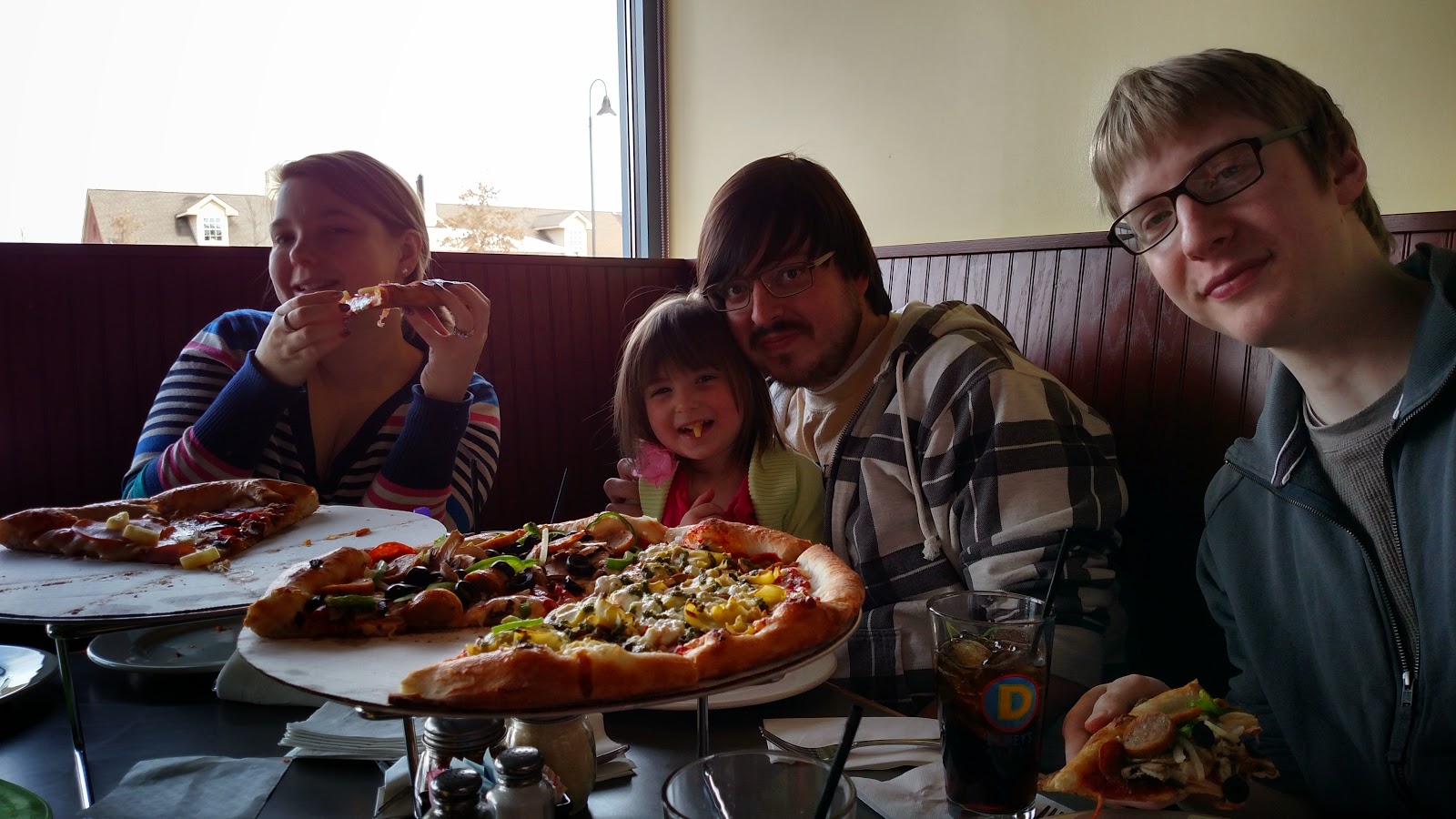 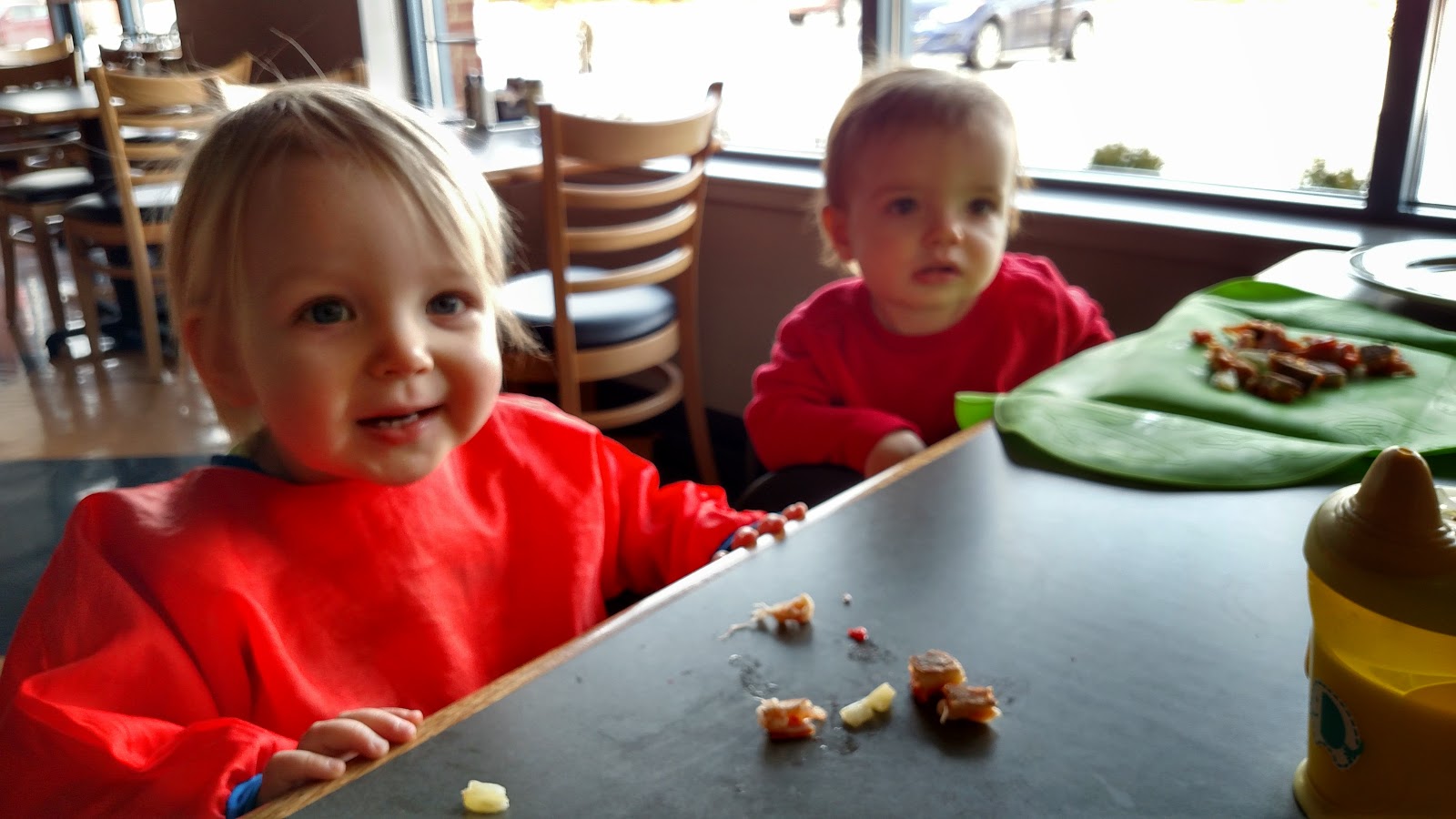 (Seriously, how cute are these two?! We always get compliments about these two looking like twins. Wilson is just a month younger than Bean.)

After we ate our delicious pizza, we loaded up the cars and headed to the zoo for the afternoon.  We had really great weather considering it was early February and the middle of winter! A lot of the exhibits were closed for the season, but we were still able to see a good amount - moose, eagles, red panda, tiger, elephants, rhino, koala, etc. 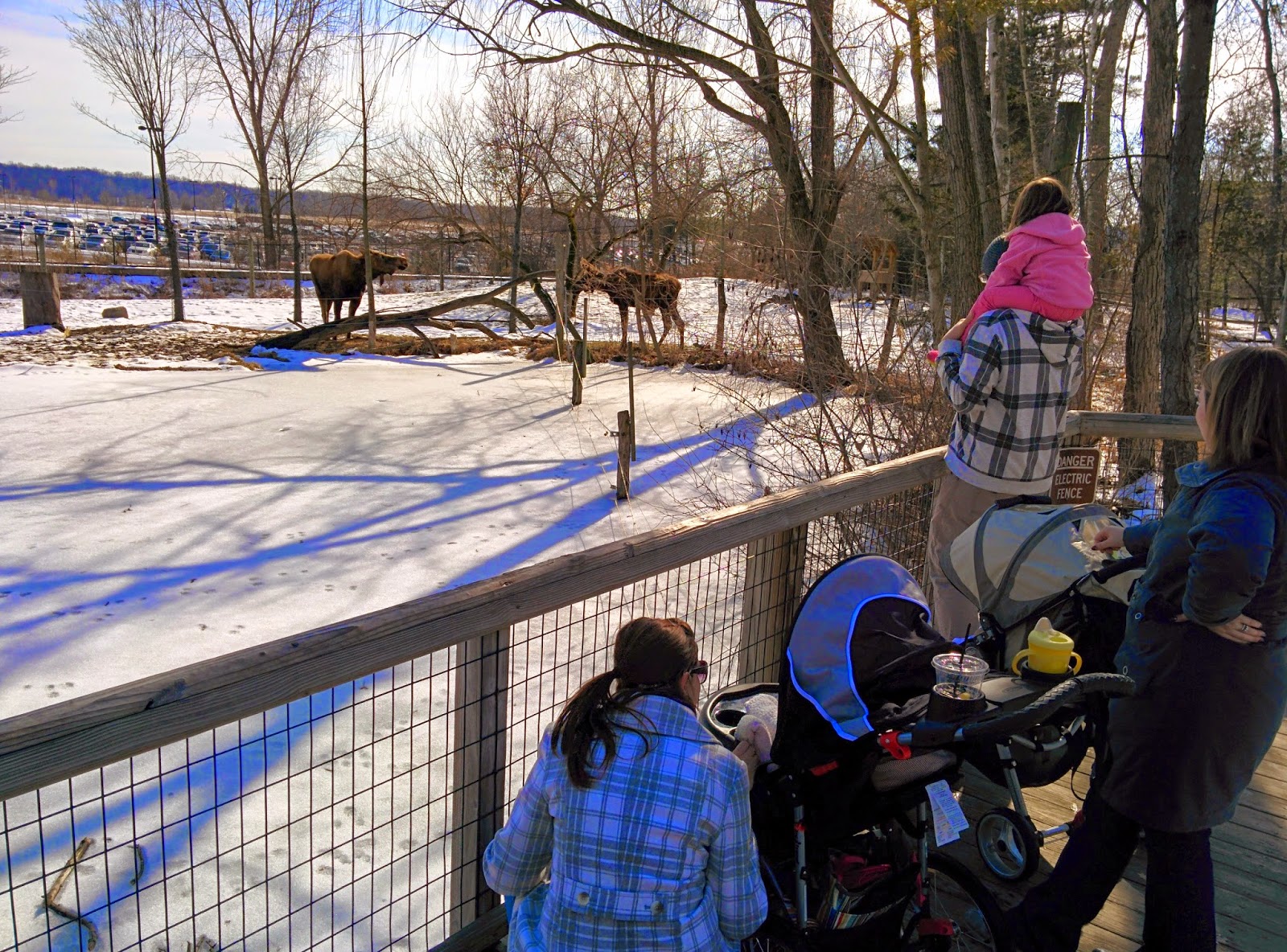 (Checking out the moose at the zoo.) 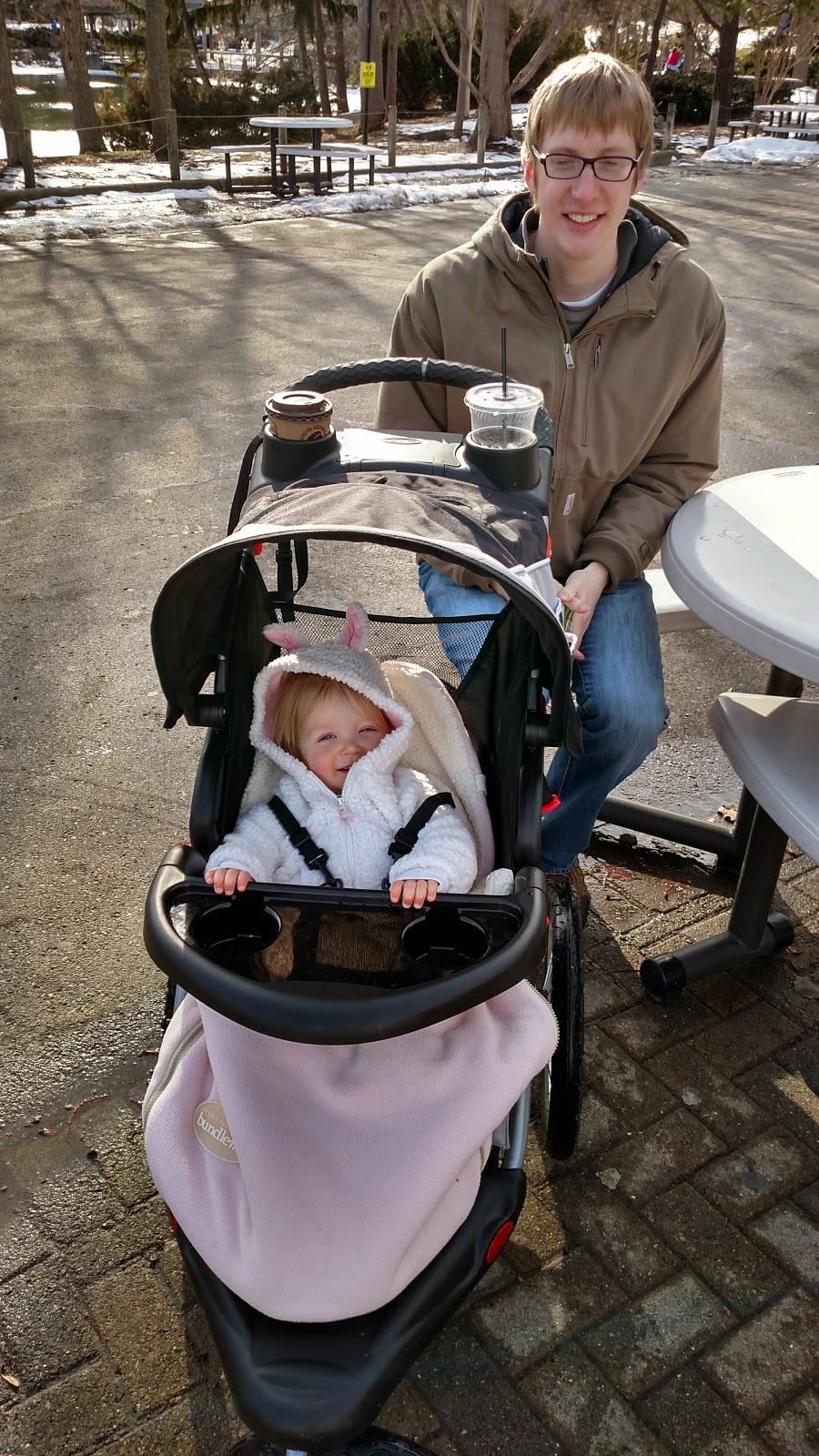 (It was just a little chilly when the wind would pick up, but we seriously couldn't have asked for better weather for a January zoo trip!) 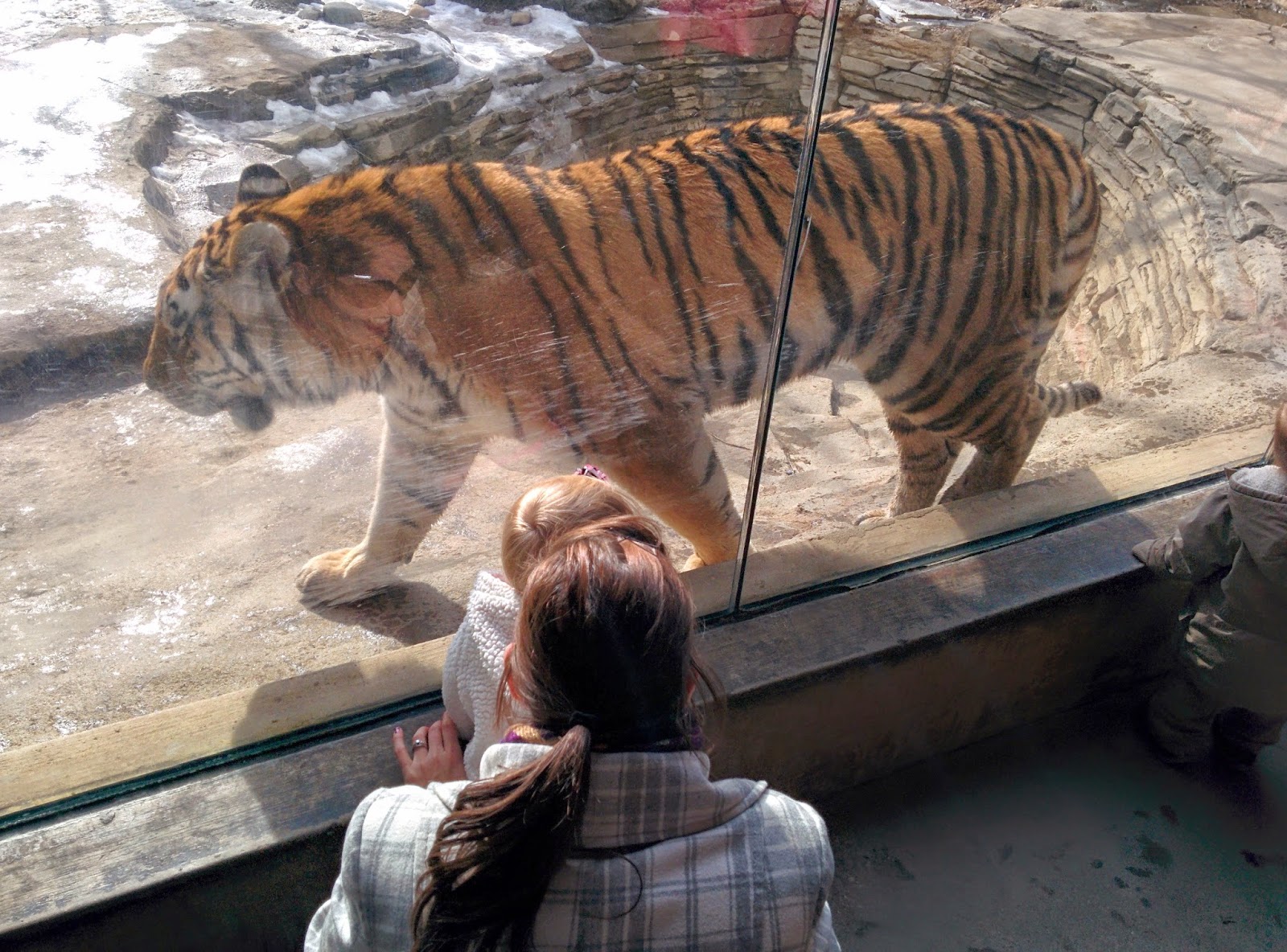 (This tiger would pace back and forth and rub up against the glass.  I thought it might scare Bean, but she was really into watching the big cat!) 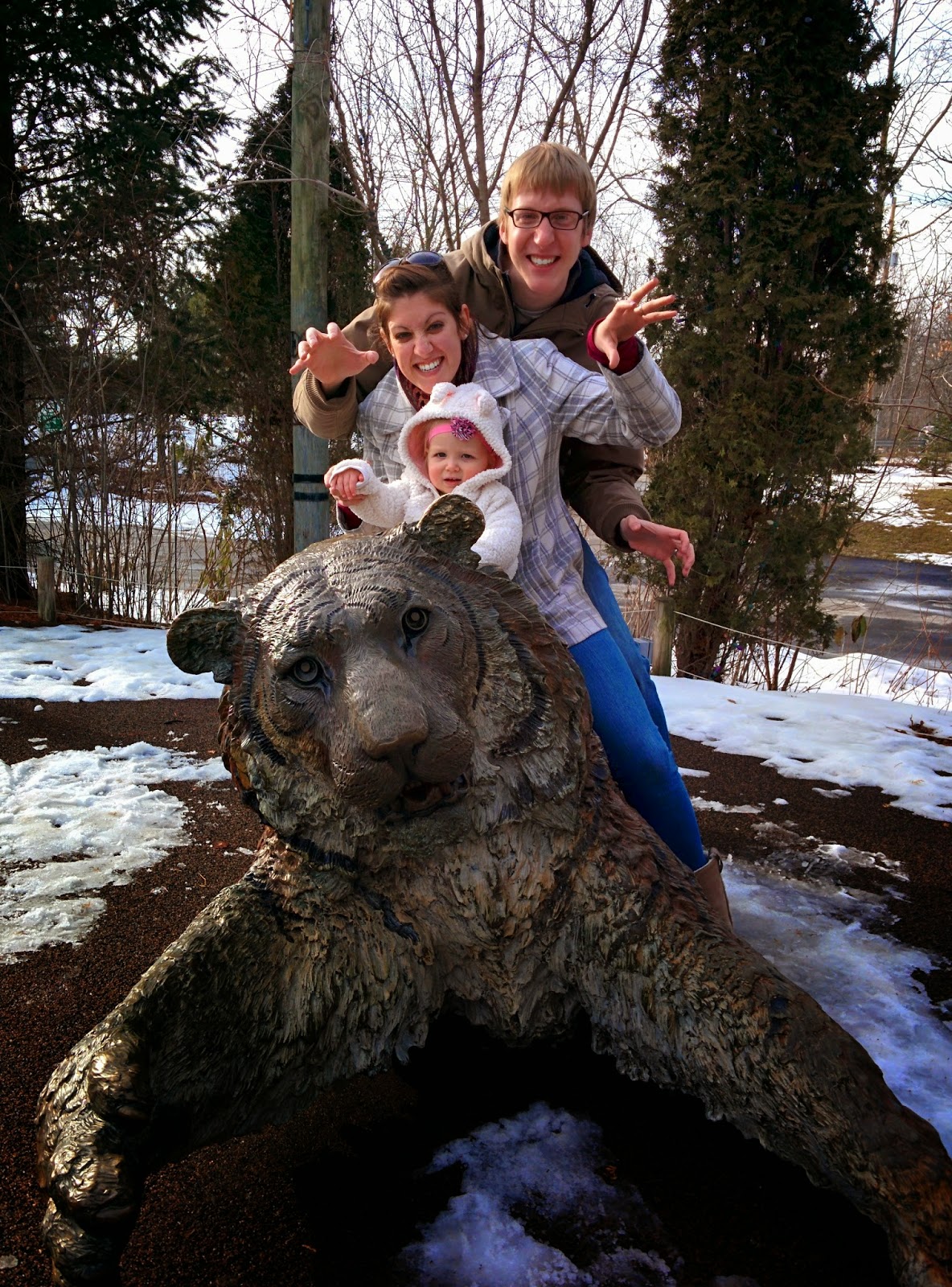 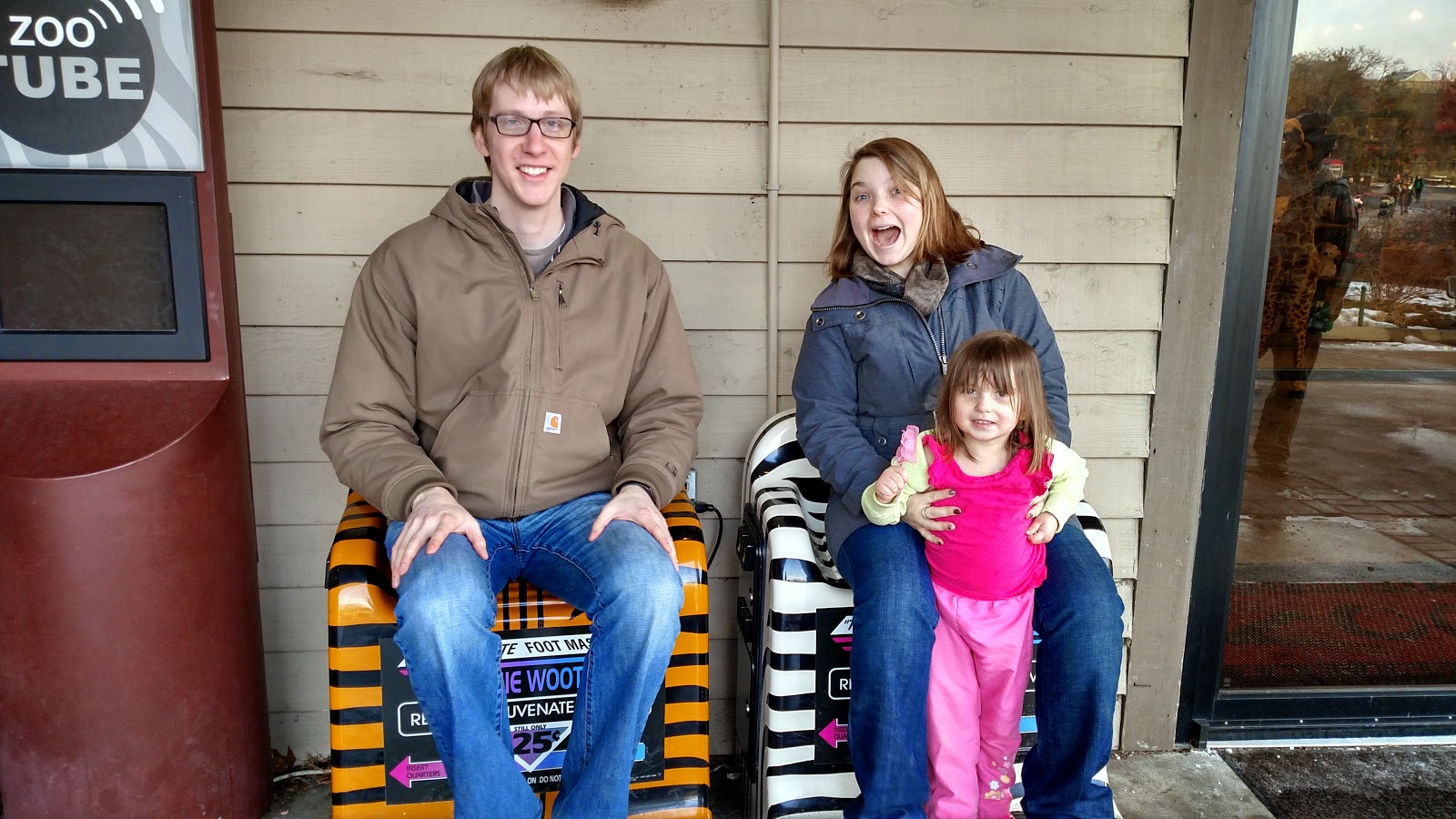 (Getting a foot message from the Footsie Wootsie.  I was on it first and was dying laughing (the foot platform vibrates and seriously makes your whole lower body shake) and Steve wanted to try it out, so we did a swap.  It really did "rejuvenate" your feet like it promised.  A quarter well spent!).

After the zoo, we headed to our digs for the evening.  We rented a house/condo via airbnb! It was an old house (slate roof!) that reminded us of our home.  It had 2 bedrooms, a nice hang out space for us and the kids. After unpacking and letting the kids run a muck, we loaded back up in the cars (with the plans of a girls car and a boys car, but then realized we'd have to swap car seats. So it was a girls car + Wilson and a boys car + Bean) and headed to City BBQ for dinner. 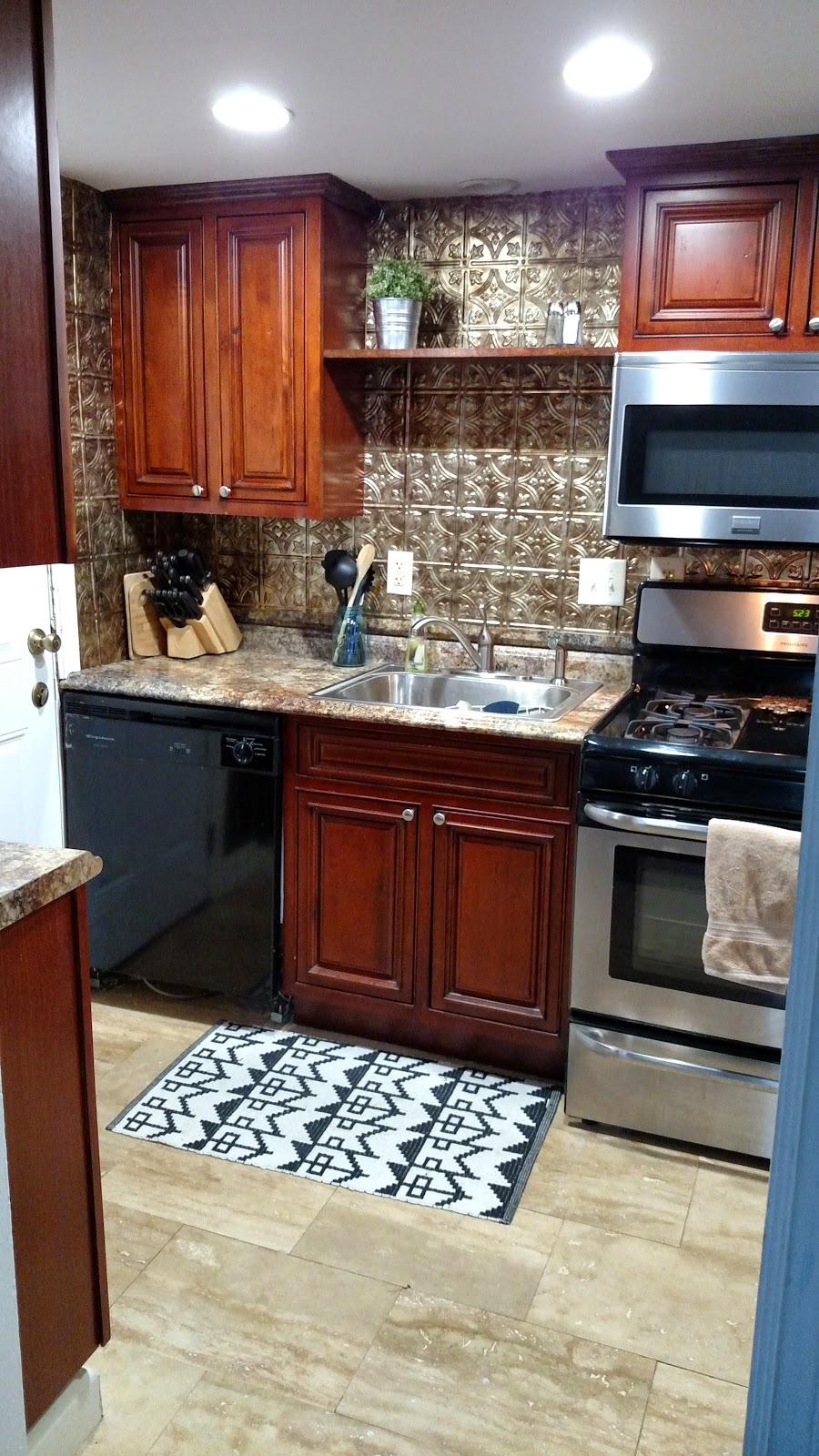 (Small little kitchen.  It's always so nice to have access to a fridge while away from home! I brought a bottle of Bean's milk with us.  During the day, I had a cooler in the car.  I was able to refreeze the cooler and keep her milk cold at night!) 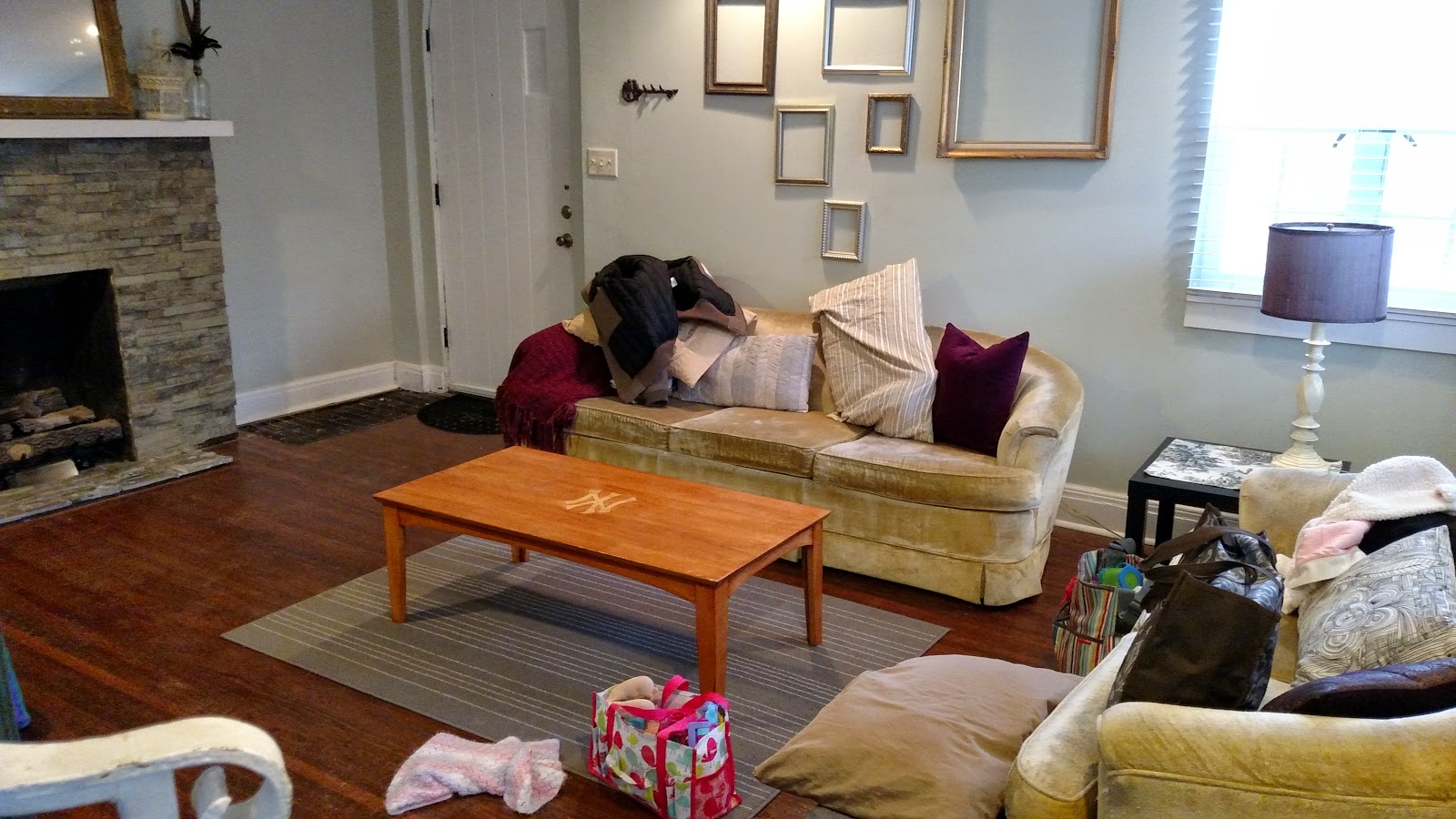 (Nice big living room to hang out in.  Other than having to move some stuff off the coffee table, the room w as fairly kid proof.  If only we'd brought our gate to block off the steps!) 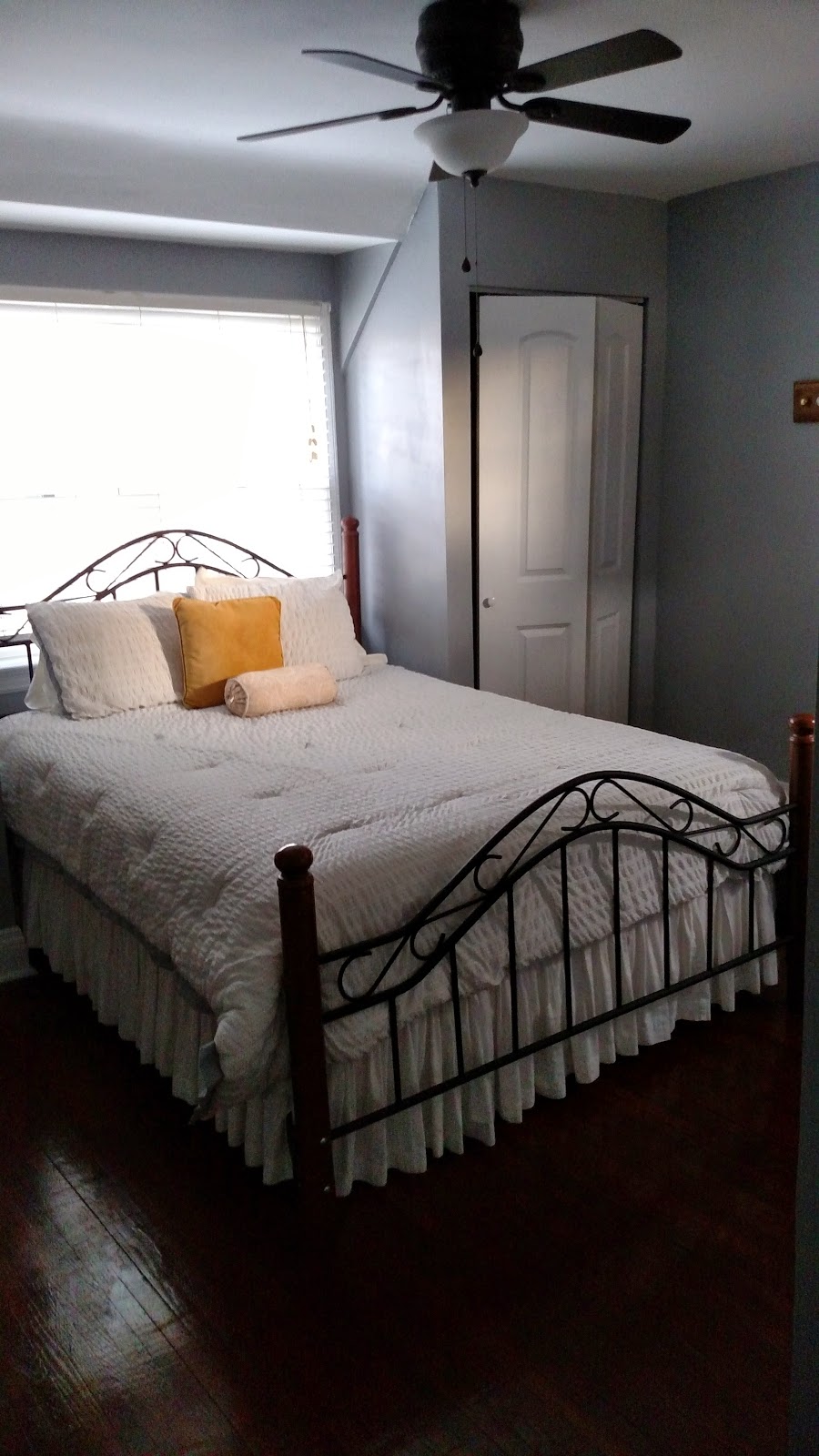 (Our bedroom.  Bean slept in a pack'n'play in the back corner.  She did great sharing our room with us for the night!) 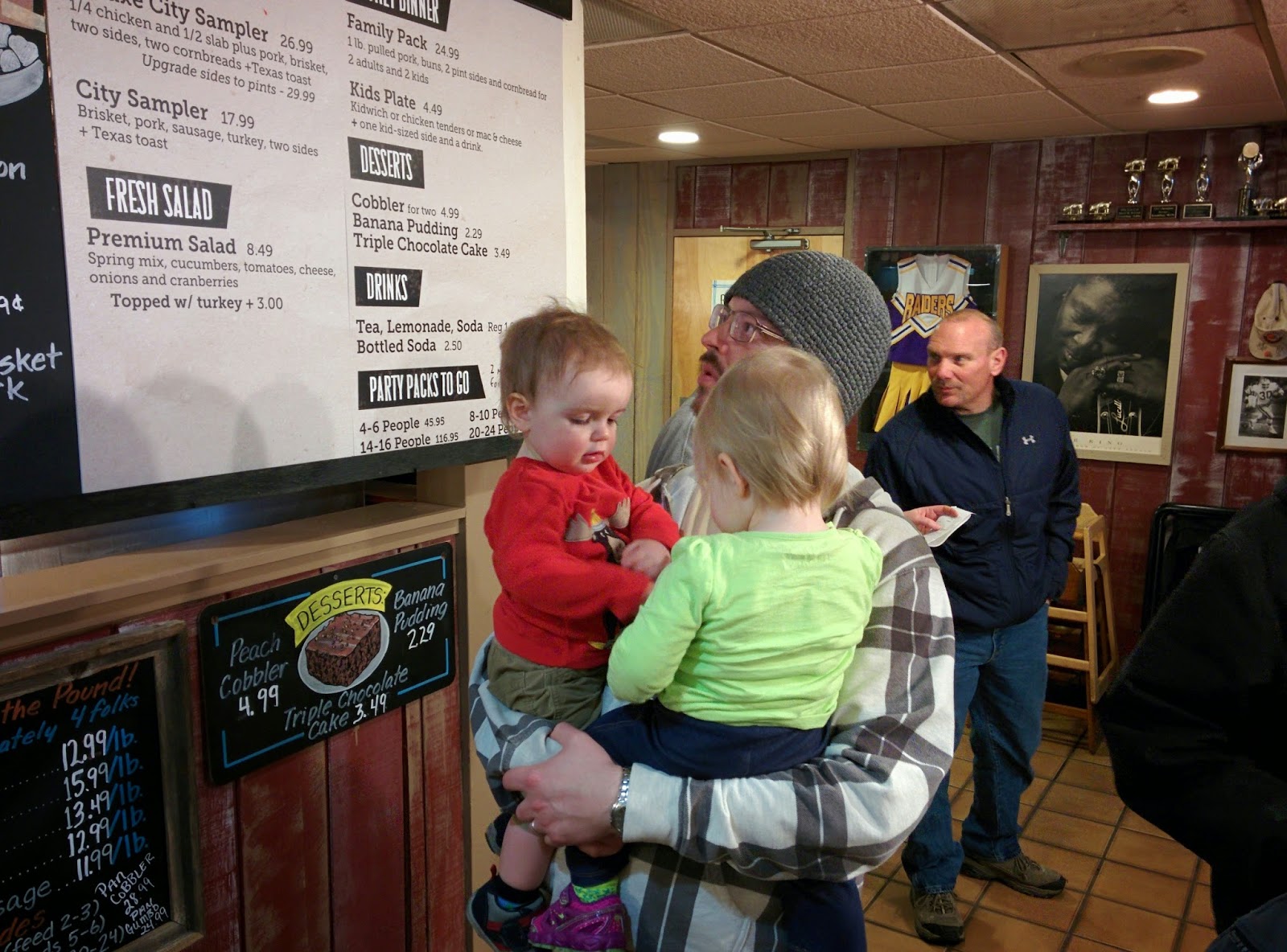 It was way past Bean's bedtime by the time we got home (she of course didn't care, I however did!).  After Bean went down, our friends got their kids down, and then it was parent time!  Wooohooo!  We celebrated the momentous occasion playing 7 Wonders and of course talking a lot of Jams -- and yes, the husbands were even involved in the conversation, but I won't mention their views.  We stayed up way to late (or at least for us Ackermans who have a strict 10:30 bedtime). 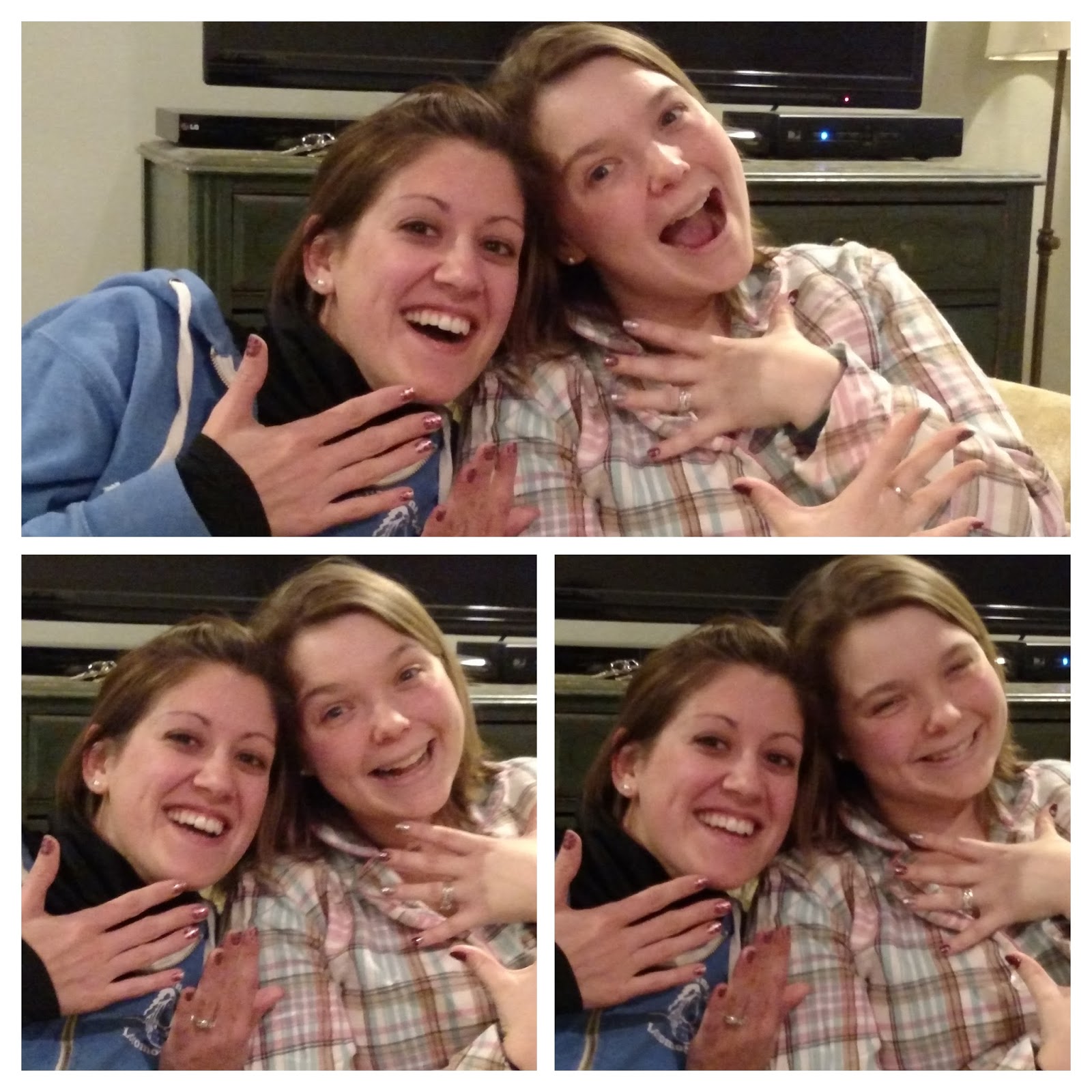 (Showing off our Jams!)

I got up early with Bean (7:30 comes early when you don't go to bed til past 1) and let Steve sleep a little longer.  Libby ended up joining Bean and I for some Saturday morning cartoons before the others trickled down. We all got ready, packed up, and cleaned up the house before heading out to get some breakfast.  Okay, really it was more like brunch since we obviously missed the breakfast hours.  We headed to a little hole in the wall place called Katalina's.  Katalina's is known for its "pancake balls".  There was very limited seating outside and the place was hopping.  So we sat at a table outside - in the end of January!  Did I mention the beautiful weather?!  They had heaters that were above the tables and it was really perfect sitting outside. 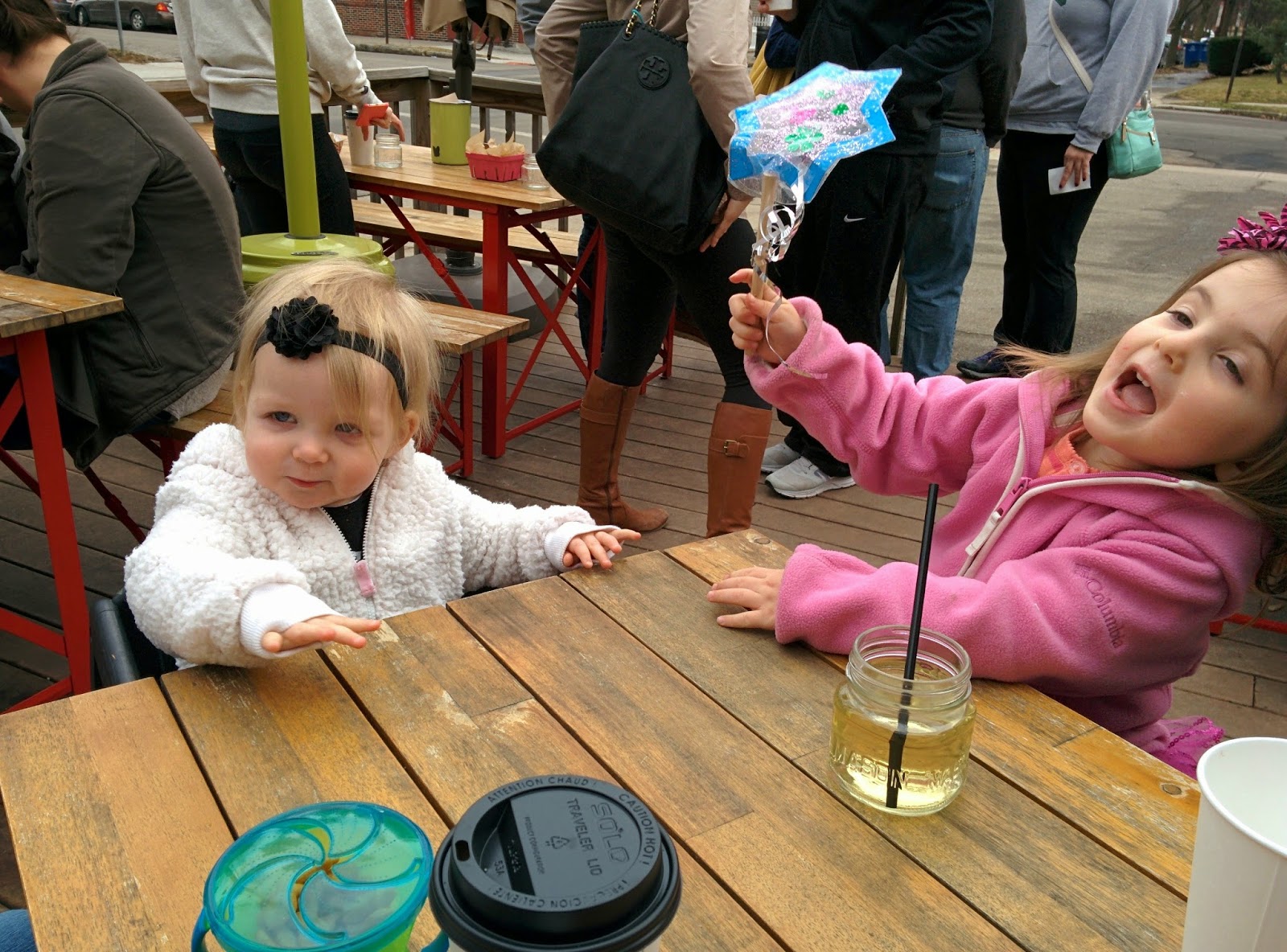 (Playing outside while waiting for our food). 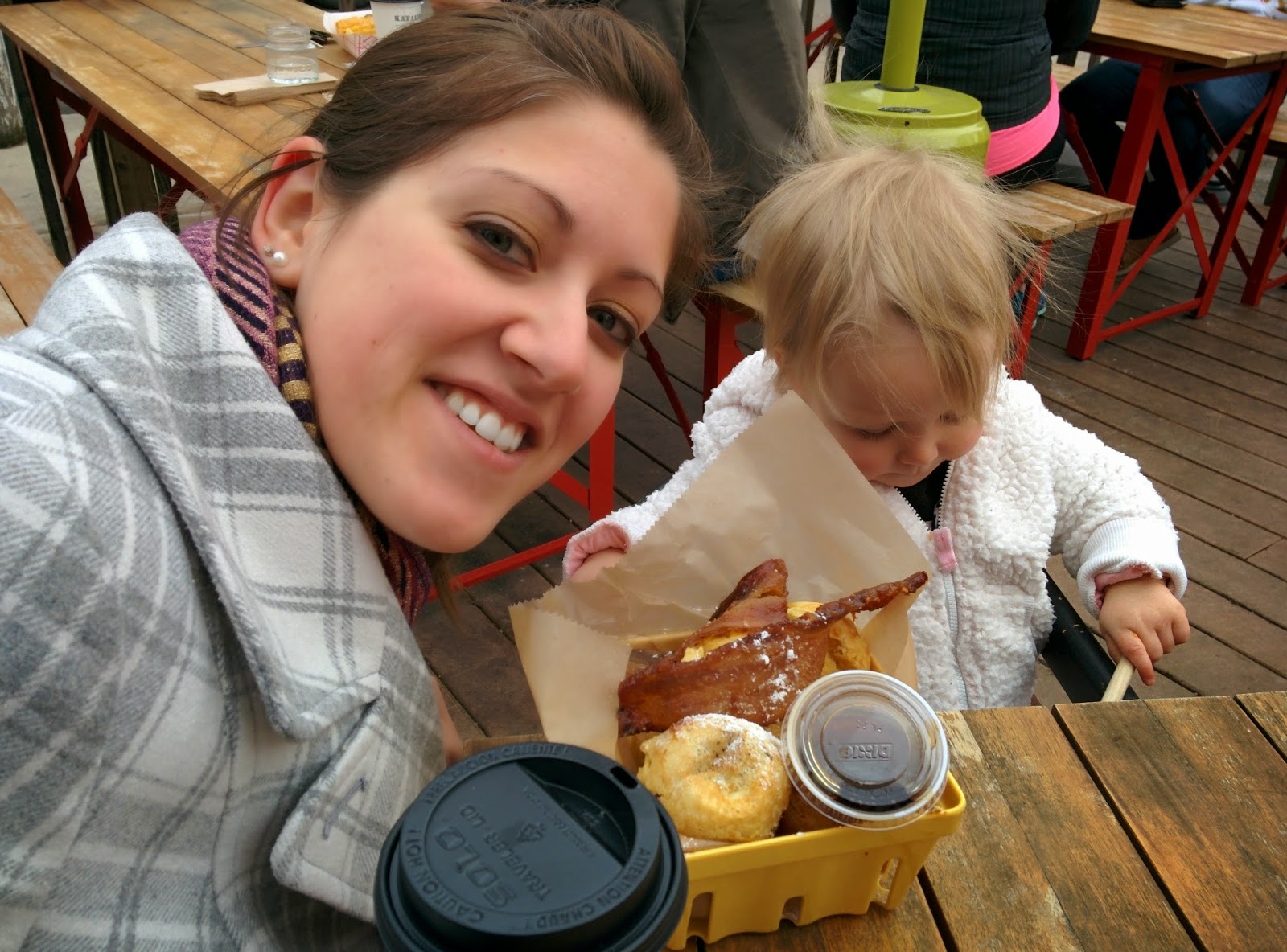 (So I know "pancake balls" doesn't sound appetizing, but they were soo good!  We each got different fillings.  Mine were dulce de leche (caramel), Steve got apple/pumpkin filling (mmmmm), and our friends got Nutella.  I don't know which was my favorite. I really enjoyed swapping and having different fillings!)

After eating our delicious food, we went on a drive through THE Ohio State campus.  Poppop is already pushing that school on Bean (which I don't mind since it would be in-state and just a couple hours away!). Seeing as how Bean slept through the whole drive, I don't think we can get an accurate account of how she feels about the school at the moment -- haha! 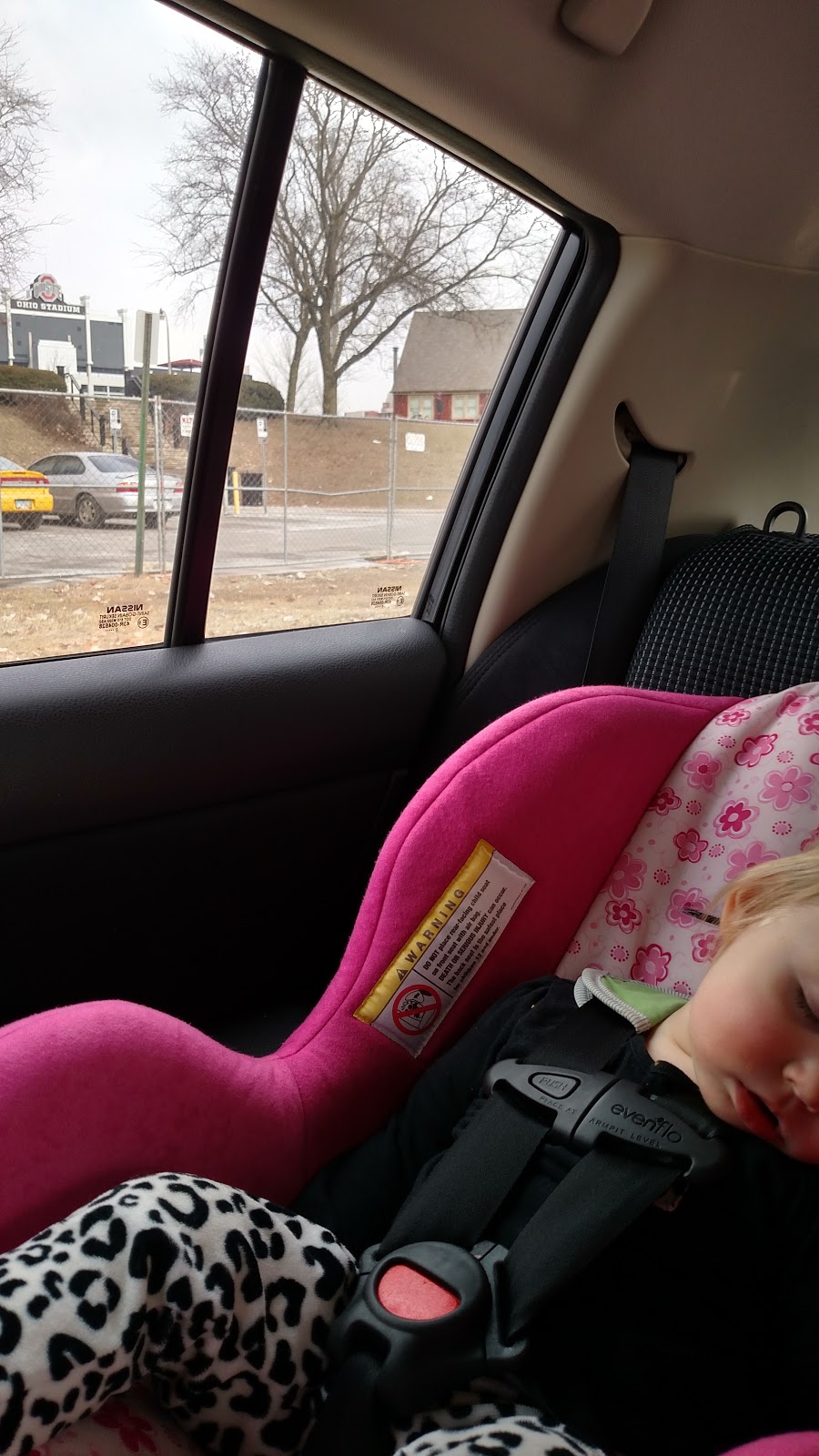 (THE Ohio State stadium in the background)

We finished up our drive-through and then headed to the Ohio History Connection.  There we meandered through exhibits that taught us about various history in Ohio through the years.  The definite highlight of the museum was going through the model Lustron home.  The kids had a blast playing in the "kid's room" in the house.  There were old Tinker Toys, army men, and horses to play with.  Then we corralled the kids to the "backyard" where they played with hula hoops and various yard toys.  I even got to show my hidden hula-hooping talent off. 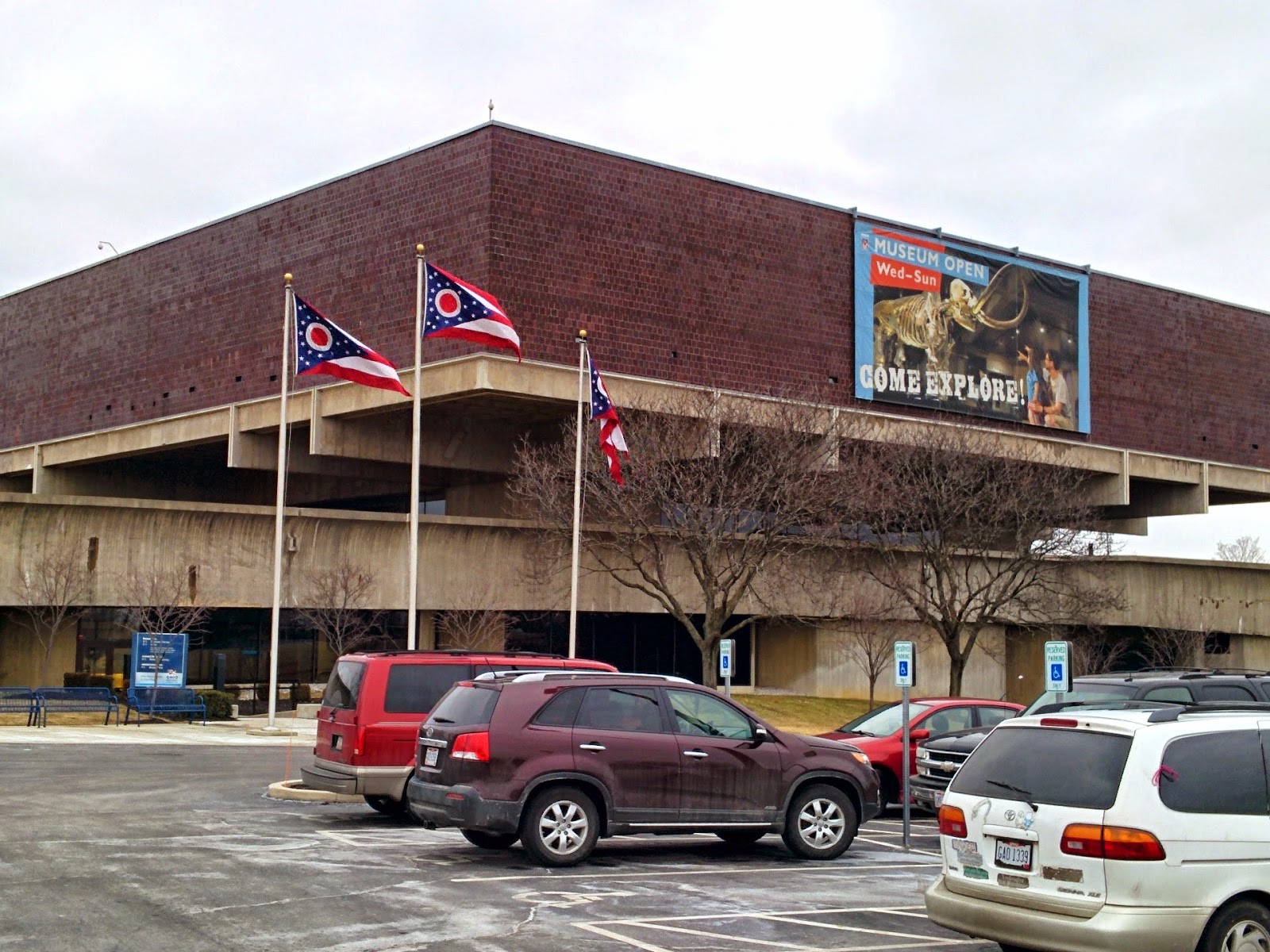 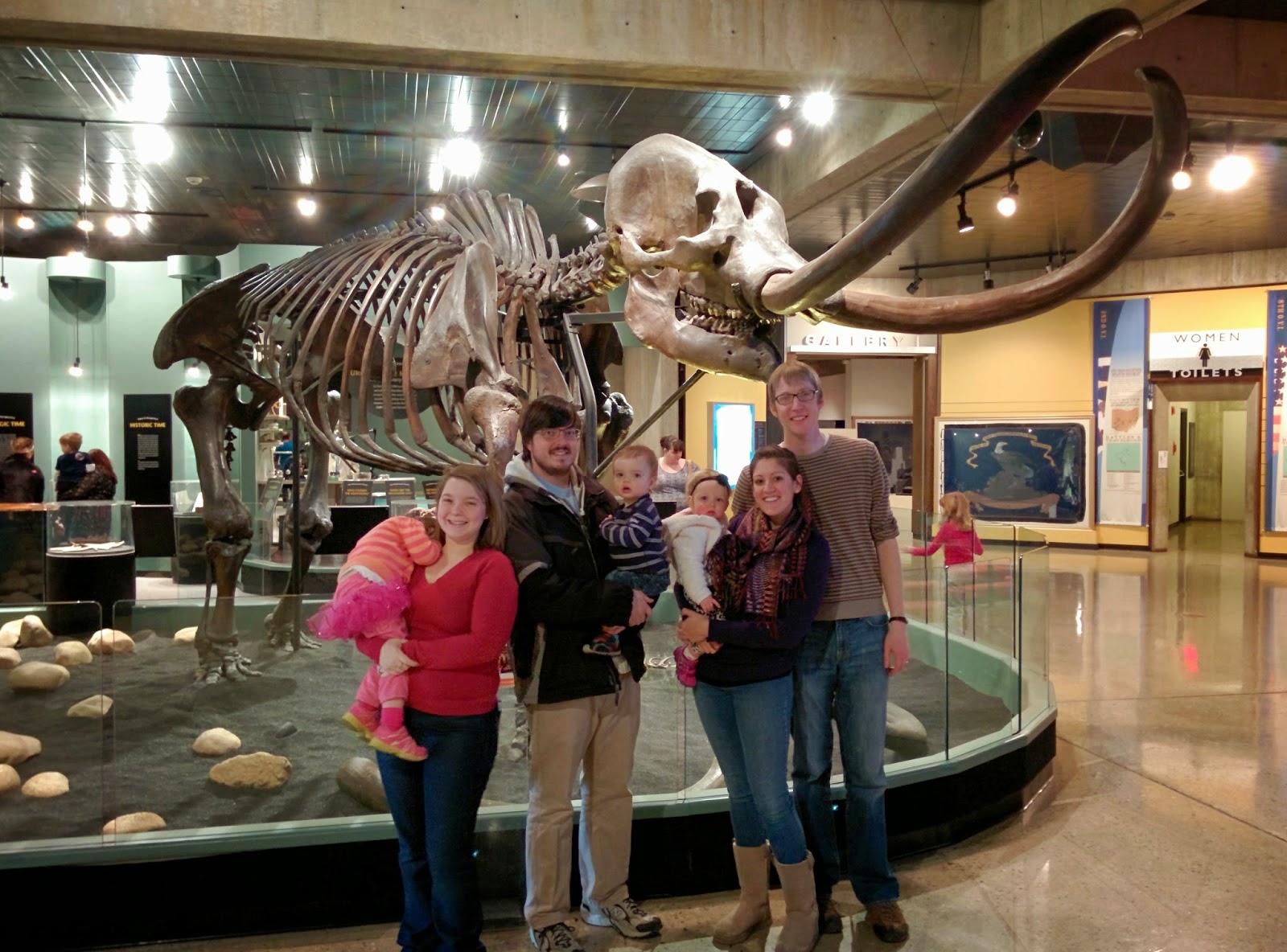 (Group shot in front of the Mastodon.  We had high hopes of taking this photo ourselves with a selfie-stick.  But it wasn't working.  We had to flag someone down and be shoobs.) 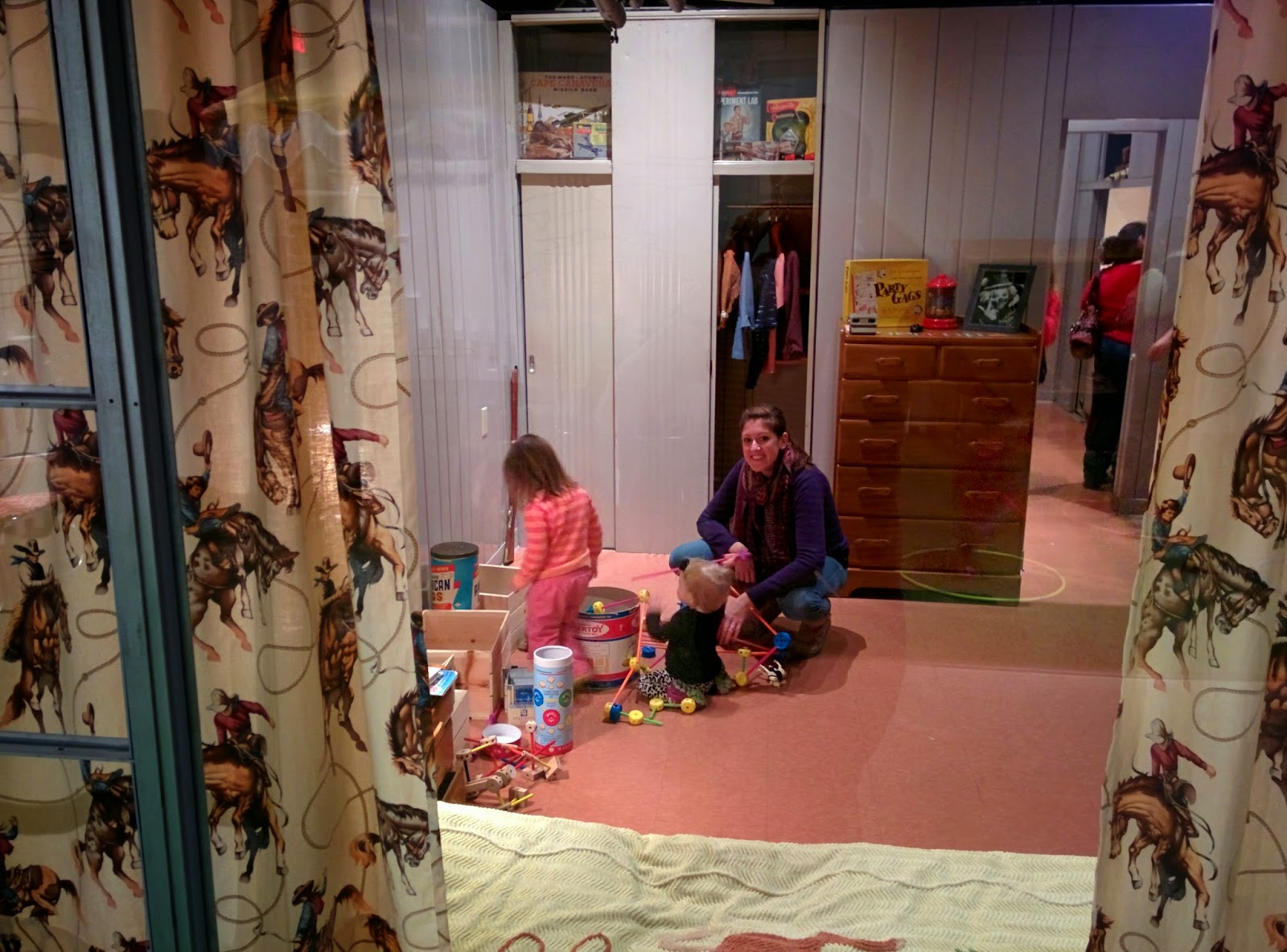 (Steve was standing in the backyard and took the photo into the kids room.  I stayed in there while the kids played and everyone else checked out the house.) 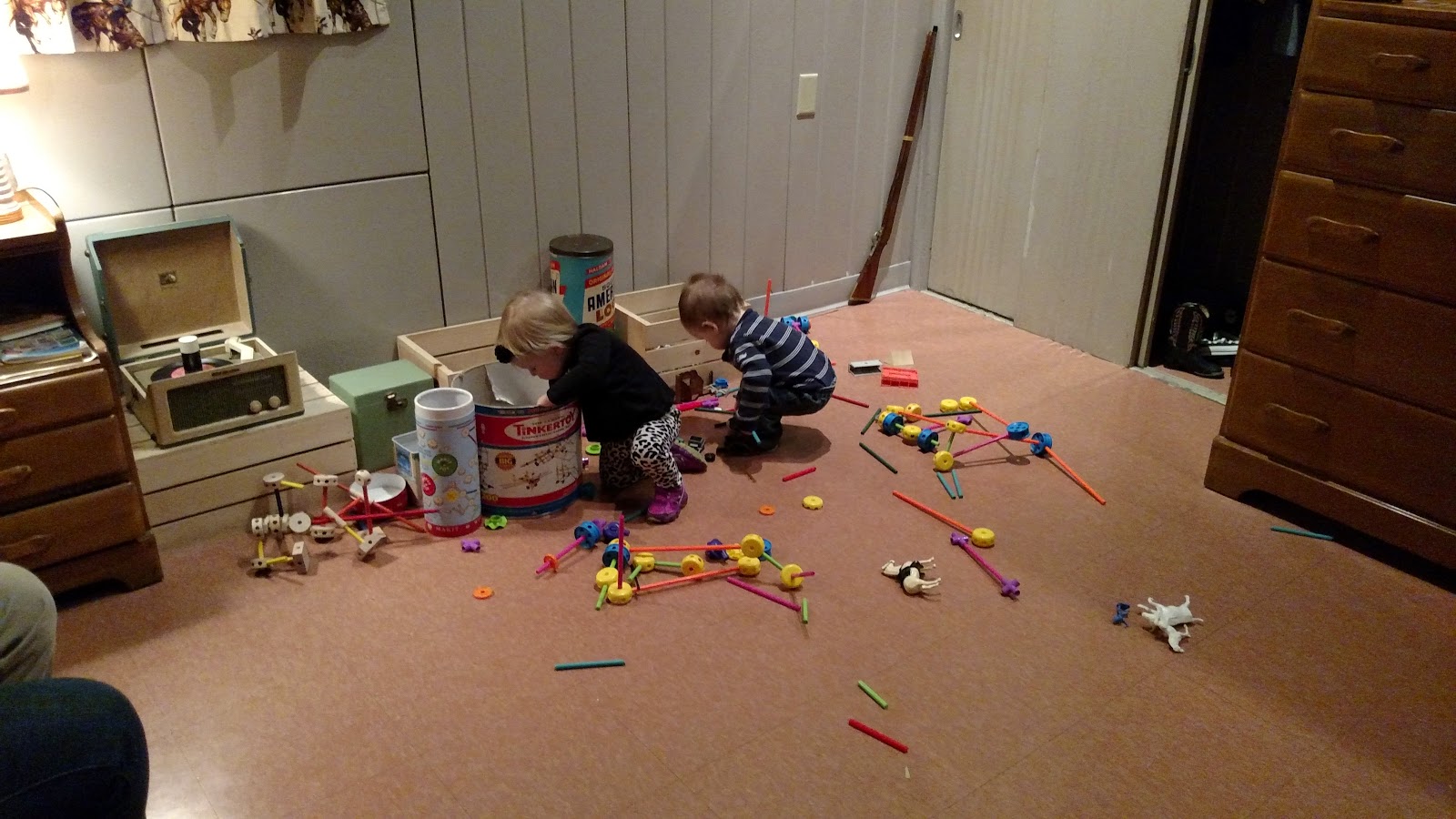 (Wilson and Bean playing in the Tinker Toys) 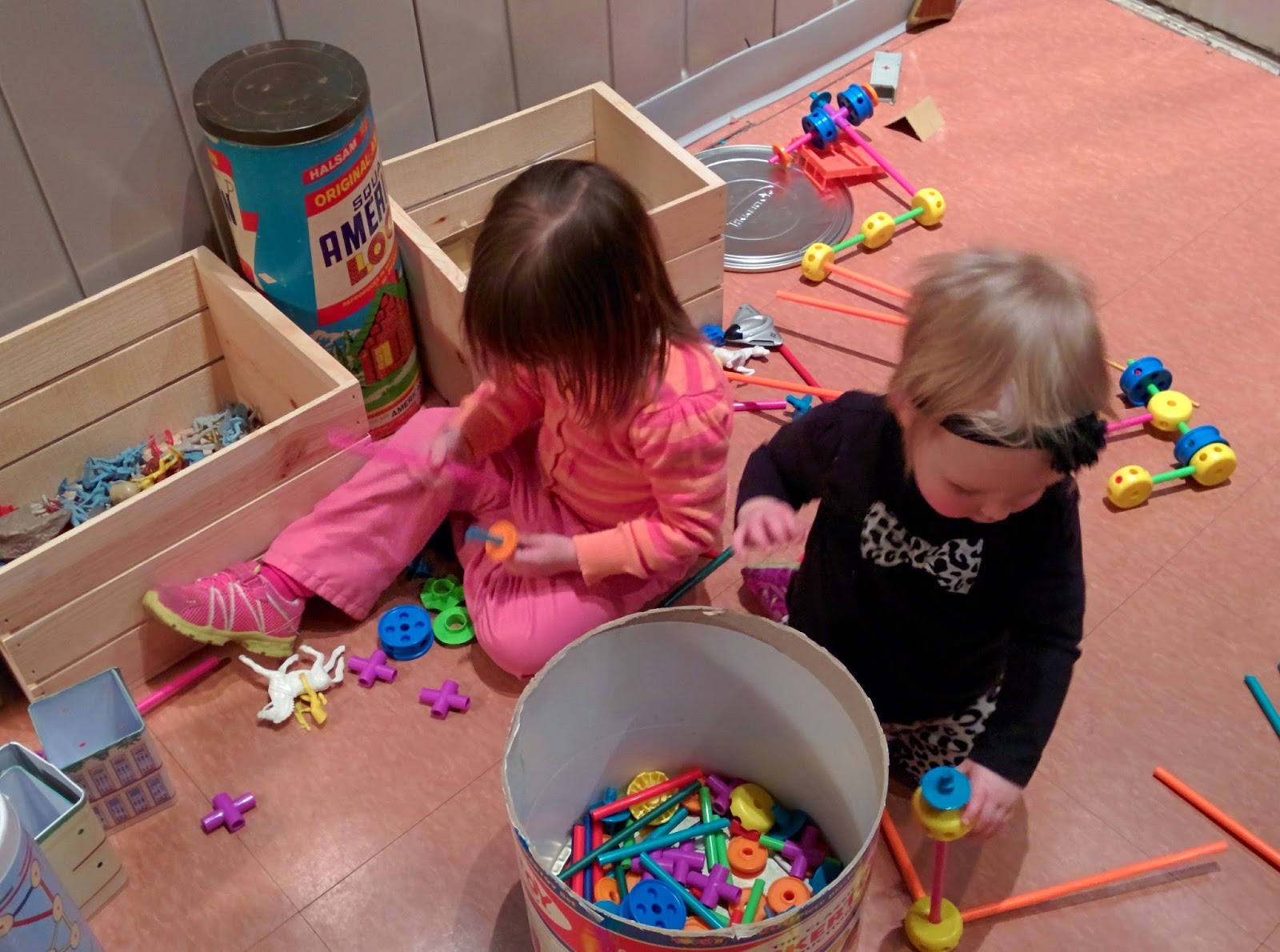 (Libby getting in on the fun!) 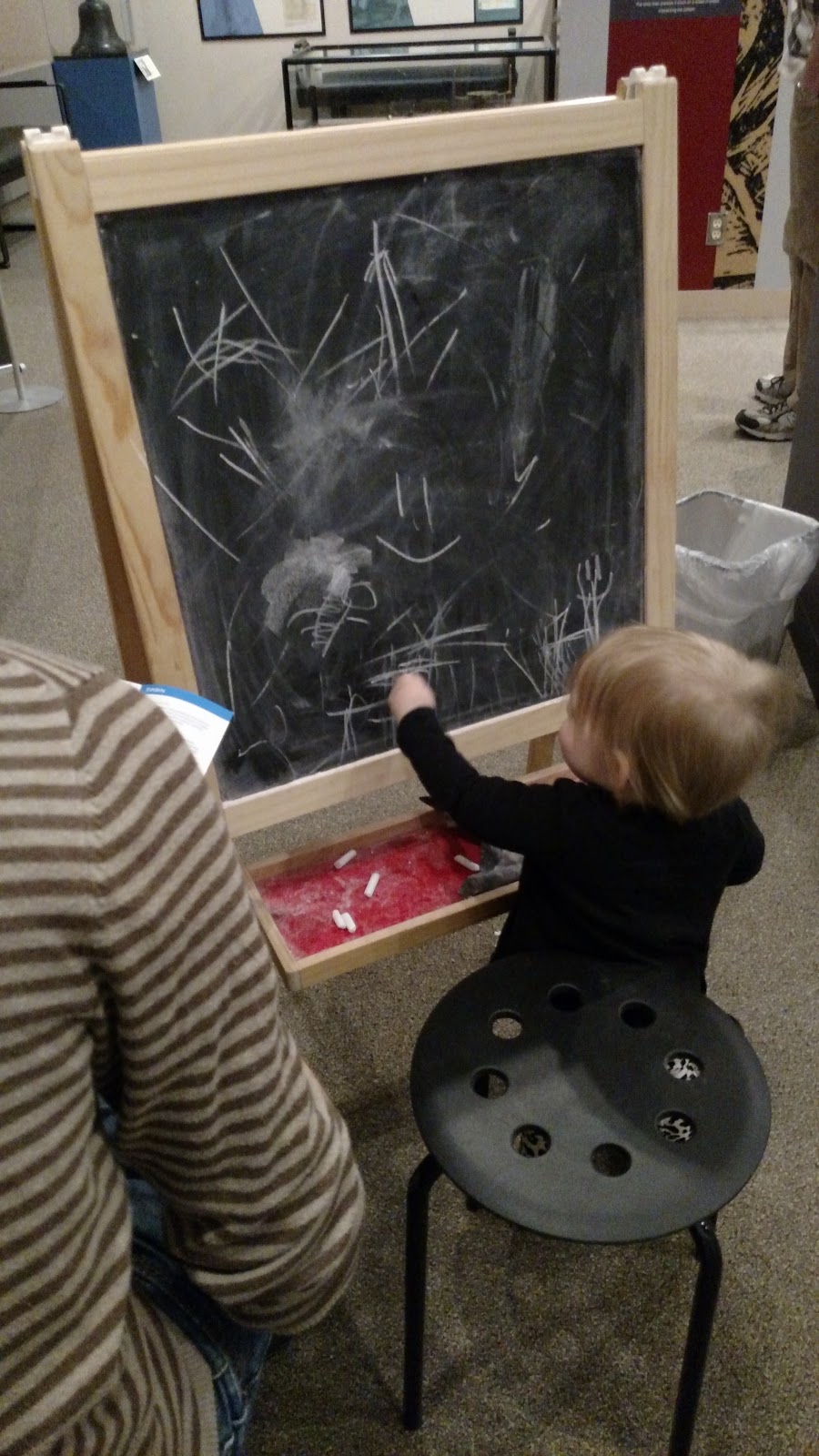 (In another area of the museum, the kids were encouraged to do some art.  While Libby did some drawing with crayons, Bean played on the chalkboard.  Steve sat with her while I looked through some of the exhibit.  Steve said Bean was having fun with the chalk, when a piece broke off.  She picked it up, made eye contact with steve and quickly shoved the piece in her mouth. Hahaha, she immediately regretted her decision and Steve had to help fish it out of her mouth.  What a silly girl!)

While at the museum, we had a stroller for Bean, but she eventually wanted out.  We had high hopes that she would see Wilson & Libby walking all around and that she, too, would prefer to walk over her knee shuffle.  Since we were in a public place, we wouldn't let her stay on her hands/knees.  So her options were riding in the stroller or walking.  She would slowly walk with us by holding our hand, but eventually preferred walking on her own and chasing after the kids! Our ploy worked! Ever since we've gotten home, she has become such a more confident (and full time) walker! 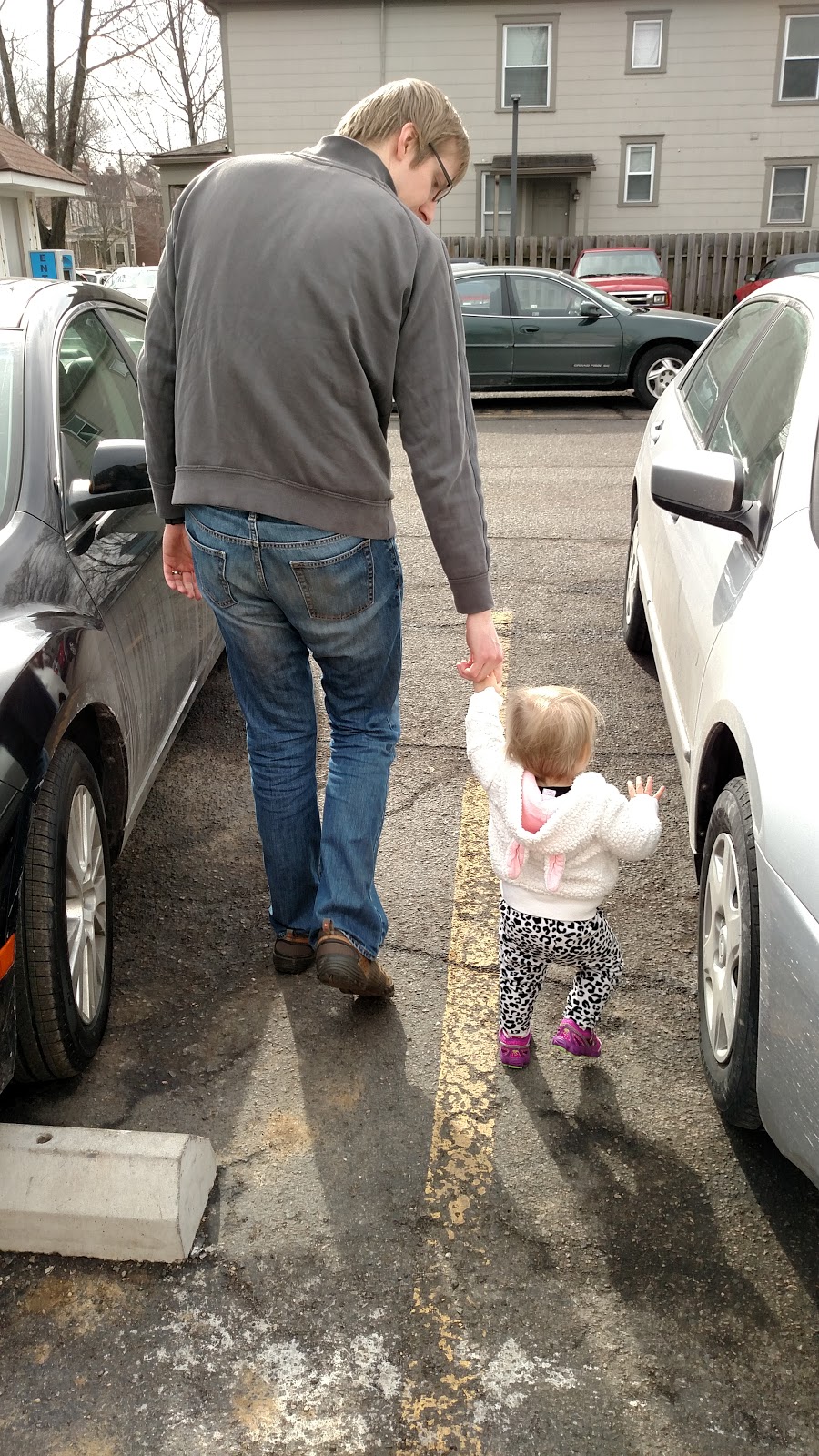 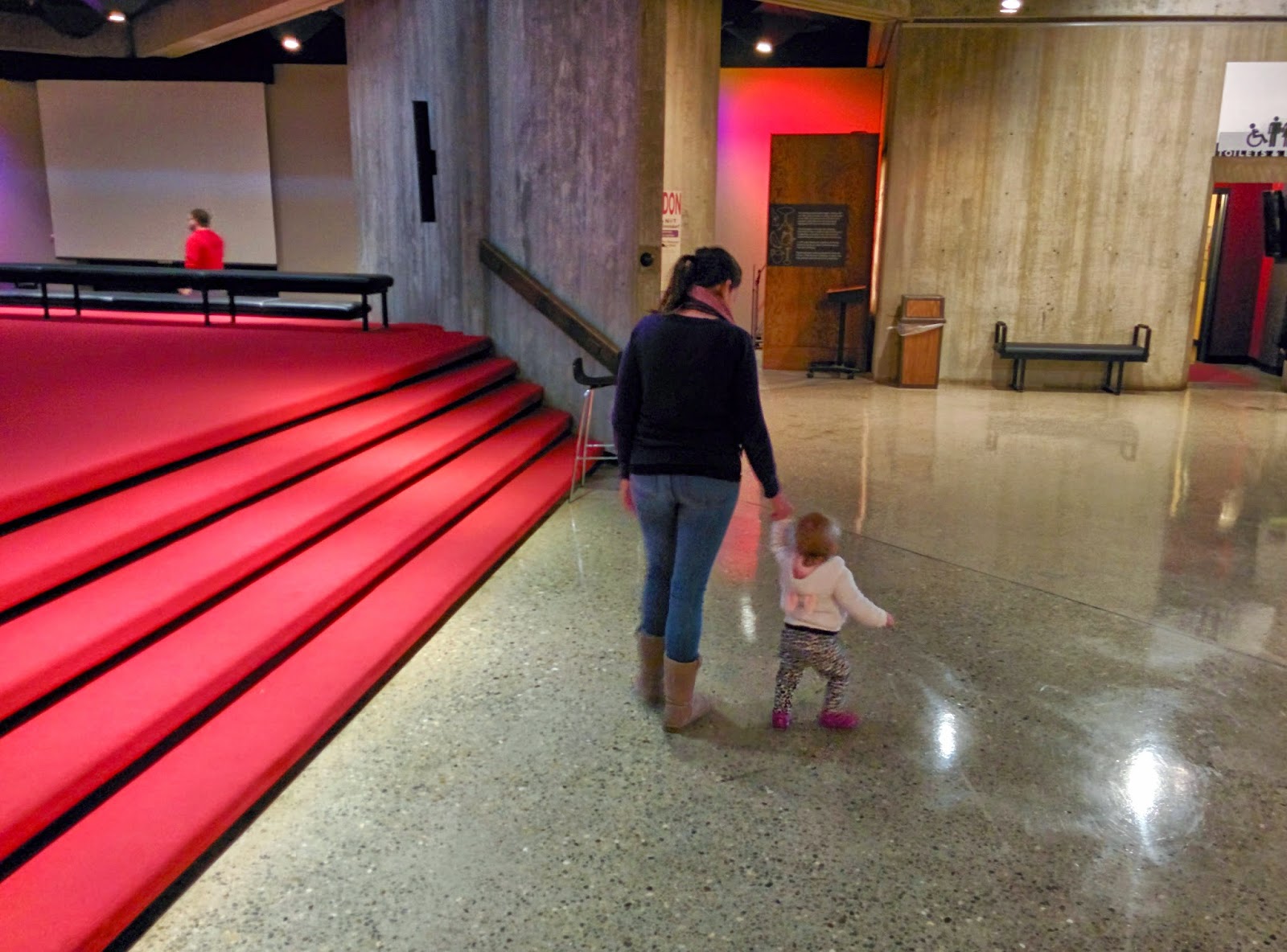 (She walked so much!  I figured she would get cranky about it, but she loved it!)

After the museum, we decided we just weren't ready to say goodbye to our friends.  So we headed to Jeni's Splended Ice Cream before calling it a day.  Bean especially loved sharing ice cream with mom/dad! Once we were filled with ice cream, we were all tuckered out and ready to get back to our homes.  We said "until next time!" to our dear friends and headed back home.  What a wonderful weekend!
Posted by Unknown at 7:24 PM