I'm still trying to play catch-up on the blog basically because of this post right here. Starting the Memorial Day (I remember it was this day specifically, because we drove back from IN on Sunday night starting at 8pm and Bean had an awful night), we entered a phase that I don't care to ever return to -- no sleep!

At first, she would resist naps/bedtime by crying a ton.  We thought she just was out of whack from Steve being gone and the late car travel.  But when sleep kept happening less and less, I started to freak out as to what could be the cause -- teeth?  some sort of bladder infection? sickness?  her just being stubborn? I gave her tylenol/advil around the clock - it made no difference.  I tried to take notes of the food she was eating to see if that made a difference - nope! I called the doctor to get advice - "it's just a phase!" - not helpful.

When I mean no sleep was happening, I mean no sleep.  She would stand in her crib and cry for a solid hour after we put her to bed.  Then she'd give up on crying and just stand in the corner of the bed, closest to the door, and just stare at the door.  It was so sad and pathetic.  It broke my momma heart. 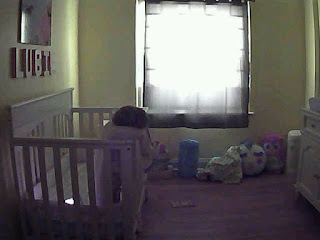 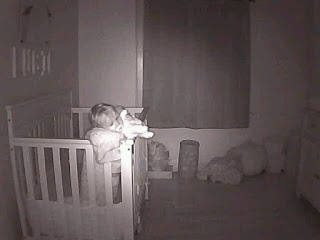 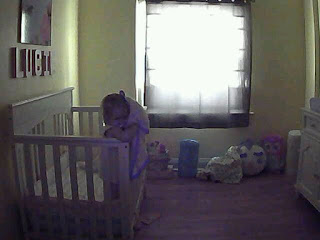 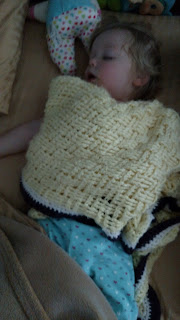 (An image I woke up to a lot -- Bean passed out, infringing on my space.  On weeknights I would go to the guest bed with her, but on the weekend, I just wanted to sleep in my own bed!  So Steve would take charge and would put her in bed with the both of us.) 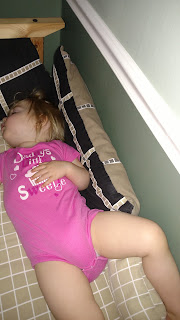 (Familiar layout in the guest bed)

The incremental strategy worked the best to get her to sleep, but she'd always wake up in the middle of the night and that strategy just plain sucks at 3am, no 3:30am, no 4:10am, blah blah blah.  I would tell myself to just survive the night and that maybe tomorrow's nap would be when sleep would return.  However, naps fell from 2.5 hours to possibly 20 minutes.  She would spend over 1.5 hours crying and resisting sleep, so by the time she did fall asleep, she crashed hard and woke up after 20 min.  I literally was "on the job" 24/7. I never got a break and it was showing.  I wasn't able to be the best mom I could be nor the best wife. 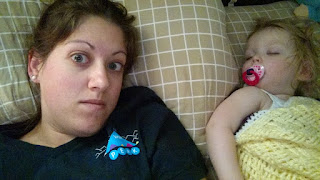 (After multiple nights of bad sleep and no naps - yes, there were days that nap was missed altogether - I was determined to get her to take a good nap.  We ended up laying down together.  I slept about an hour, she slept another hour after I woke up.  I was so over not having a "mom break"!  I couldn't do any of my normal naptime routine - run, binge netflix, and eat oreos!)

Around week 2, I was at my breaking point (although, I say that, I don't really know what that looks like).  I felt guilty/selfish for wanting sleep myself.  I felt depressed and thought I'd never sleep again.  I hated the person I was becoming - bitter, not wanting to be a mom, etc.  It was the lowest of the lows I've faced as a mom; and probably the hardest test on our marriage (just being real!).  I second guessed every little decision (will this extra helping of cottage cheese keep her up tonight?! What if these berries are causing an upset stomach?  What if she's too full? What if she's too hungry?  What if I let her cry too long and she resents me?  What if I don't let her cry enough and she is becoming spoiled? -- you get the point). 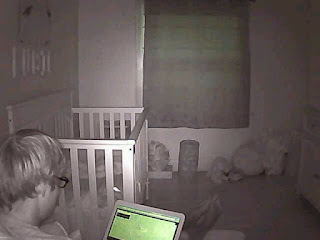 (One night, Steve got her to fall asleep just by being in the room with her.  He went in, told her to lay down - she did - and he proceeded to just work on his computer as she fell asleep. He even successful made it out of the room!) 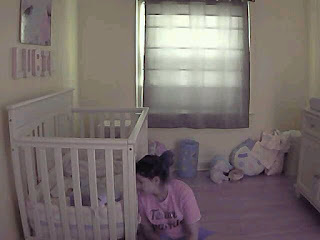 (Me begging her to just go to sleep already during a nap.) 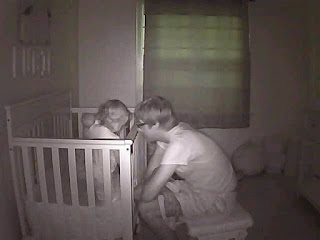 My lowest point occurred at around 4am on the tail end of week 2 of "the phase" -- I found myself laying on her hardwood floor trying to sleep. Each time I'd roll over, I'd look up to see her staring silently down at me from her crib (she was standing and just looking down at me like this was completely normal).  I cracked.  I picked her up and went and slept with her for the 10th night in a row.  I needed whatever sleep I could get to try to find some joy in being a mom the next day. 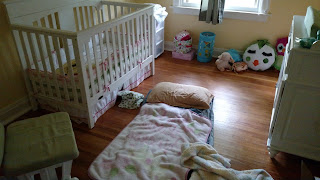 (When I realized I can't keep doing this)

I started to do some research and just simply googled "18 month toddler sleep issues" and found a jackpot on the Baby Sleep Site -- we were in a legit phase known as the "18 month sleep regression".  I've had friends throw out the term "sleep regression" and I thought it was just some made up term to make moms feel better.  Well, regardless of its validity, I can say it made me feel tons better to know that in the midst of weeks of no sleep, there was this hope of "sleep regression" that I could hold on to.

Everything on the list Bean had:
-Separation anxiety - Steve had gone to China and she was stuck with just me as her guardian. I think she feared me leaving mixed with daddy being back.
-Teething - her canines were coming in and I had been warned that they would be the worst.
- Gaining a lot of independence - I had been excited about all the things she could no do for herself! I saw a lot of myself in her -- strong willed/controlling - uh oh!
-Rapid growth/knowledge - Bean was starting to mimic a ton and we could tell her vocabulary was expanding!

Right away, I felt relief! It really is "Just a phase!" The site said it could take 2-6 weeks.  We were just beginning our 3rd week.  I told myself I was halfway through.  I can do this! Even though figuring this out didn't change anything, my attitude changed.  It turned from being hateful to being compassionate.  I realized this wasn't fun for her.  She wasn't doing this on purpose to get me to sleep on her floor at night.  She wanted sleep as much as I did, she just had a lot going on and couldn't shut her brain off to make sleep happen.

I went back to giving her medicine around the clock (and I do mean around the clock!), sent her to bed with a sippy cup of water, put a baby doll in bed with her, and just recognize that she may have to just cry some at night - but that she would be okay.  By sheer coincidence, my mindset change corresponded with the the regression ending.  On June 19th (2 days after my birthday), she slept through the night -- all on her own! I didn't have to go in the room a bazillion times, I didn't have to just end up laying in bed with her, I didn't feel guilty or second guess my decisions.  What a great blessing! The next day, nap increased from 30 min to 3 hours! I didn't want to admit sleep was happening in fear of jinxing it.  But after the 3rd night of straight sleep, I admitted success! We survived the sleep regression! 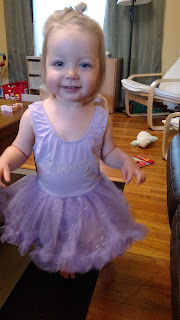 (Our princess -- I'd do anything for this child. . . like sleep on a hardwood floor just so she knew I was close by.  Things we do for our kids!)
Posted by Unknown at 9:05 PM