Steve and I enjoy watching Shark Tank and love learning more about some of the ideas that are presented.  One of those Shark Tank successes is a company called Plated.  You pay a subscription fee for them to have meals delivered to your home on a weekly basis.  You can get a discount when you first sign up, so we tried it out.  For less than $30, we got 3 meals (Steve got to pick them out). The regular price is around $70.  We cancelled our subscription right after our first delivery just so we could try it out.

The food all arrived together in a box via FedEx.  The box was wrapped in a plastic bag.  When I opened the plastic, then the box, I found a sealed refrigerated bag. I tore it open and started to unpack the food.  Bread, noodles, spices, and veggies were all up on top.  Each meal was packaged together and any items that were separate had a sticker on it that corresponded to the correct meal.  The last layer was the meat and 3 huge frozen packs.

Each meal had step by step instructions (with pictures). Everything was included in the box (not counting olive oil/salt/basic pantry items) and in the correct portions.  You just had to slice veggies, mix sauces, and cook!


Chicken Shawarma
We made this meal first.  It was delicious! Only complaint was that we wished there was a little more chicken and Lavash (bread).  We worked on making this meal together.  Steve mixed the dry ingredients with the oil and marinated the chicken while I got to slicing veggies.  It was really fun making dinner together in this manner! Steve could look at the next step and get to work (which if he was trying to help me cook, I typically can't explain what help I need and he just ends up standing there). 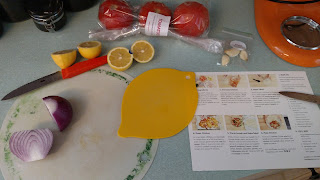 (Slicing up the veggies and following the step-by-step instructions.) 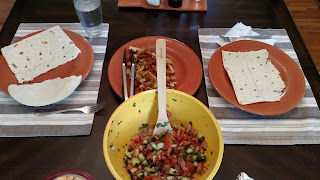 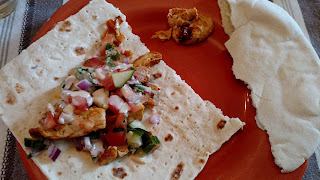 (Yum! This did taste very fresh.  I also indulged in hummus and pita bread, not included in meal, haha.)

Pork Pad See Ew
This one was probably my favorite.  It was very flavorful! You got to decide how hot to make it by how much chili you included in it.  Other than the spices (which I could probably figure out), I'll be able to make this meal again pretty easy! 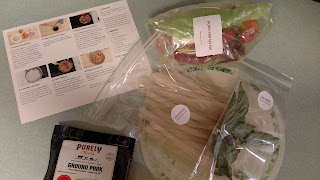 (Here you can see how a meal was packed.  In the bag was the peppers, soy sauce & fish sauce, and chili.  The noodles, thai basil, and meat were packed separately, but each item had the label that named the meal.) 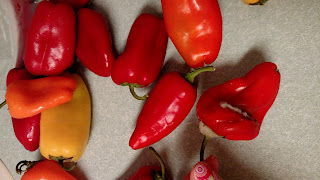 (One of the peppers was bad, so I just tossed it.  I thought this was a crazy amount of peppers, but I trusted their judgement.) 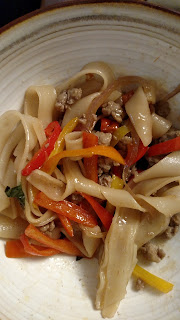 (Delicious! Only mistake I made was not stirring the rice noodles in the water enough, so they got a little clumpy.  Lesson learned.)

Steak & Collard Greens
I was least excited about this meal when it arrived, but it actually wasn't as bad as I feared! I am not a fan of rarer meat and also feared the collard greens.  You cooked the greens in a lot of garlic which made them taste really good.  I did end up cooking my portion of meat a little longer (like I sliced them then laid the slices on the pan for some quick heat) just because I get crazy about the meat being red. Steve's only complaint was that there wasn't enough meat. 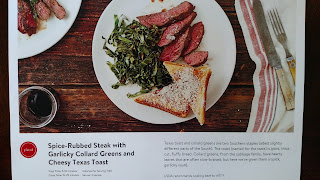 (Pretend like this is the meal I cooked and on my own plate.  This is the front side of the instruction sheet.  Each sheet told a little blurb about the history of the meal. We ate our dinner before I realized that I didn't take a picture.  I also didn't document the prep stage.  This meal was pretty straight forward, slice garlic and prep greens; put a rub on the steak and pan seer; butter the bread and fry it, add some sprinkle cheese.  Simple, yet a nice change of pace from the meals I normally make!)


All in all, I'd say we enjoyed the meals for the discount price but couldn't justify continuing the service at the regular price.  It was very nice to have all the ingredients portioned out and present (I'm one to forget one measly item at the store).  It was also really fun to make the meals together and it to be fool proof.  I could totally see using this service if we lived in an apartment in some busy city (where it's hard to plan out meals and shop in advance) but for now I will stick to my shopping at Meijer and cramming my brain for what to make for dinner.
Posted by Unknown at 8:30 PM