It's hard to believe that our Christmas was a month ago.  We spent over 2 weeks travelling between CO, OH & IN to visit both of our families for Christmas.  We spent the first week leading up to Christmas day in Colorado with Steve's family and the week after Christmas with my family in Indiana.  It made for a long and tiring couple of weeks, but it was worth it to be able to spend special time with our families. 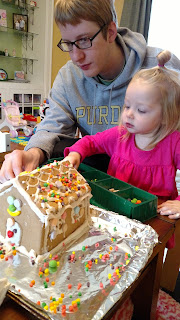 (The calm before the storm! We tried to do some family Christmas activities with Bean before we left town. She did a great job decorating with the candy and not eating it all like her Daddy. . .  Next year, we'll have to be even more intentional about making sure Bean gets "Christmas" with just us before we visit all our family.)

We left on the Thursday (before Christmas) and headed to the airport in Detroit.  Ohio was having weird weather and it was in the 50s.  Boy was it a shock to get to Colorado and it to be in the 30s and below! Our flight came in close to Steve's brother Ian's flight.  Steve's dad came and helped us get all our luggage and load up the car to head to their house.

The first part of our Colorado adventure included a visit to a museum to see a neat Sherlock exhibit (you got a case book and went to different stations and tested different aspects of the crime to figure it out), lunch at Sweet Tomatoes (Steve had been dreaming about that lunch for years), and a "kids only" trip to Casa Bonita (a not very good -food wise- restaurant that has several themed rooms with entertainment like cliff divers, puppet shows, games, etc). 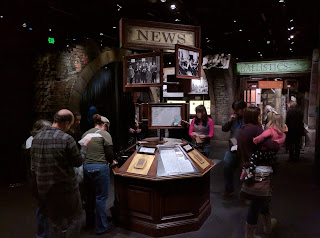 (A station in the Sherlock exhibit.  There wasn't much for Bean to do, so she was entertained by each of us at some point.  There were some stamps she could do in the case book, but not enough to keep her entertained the whole time.) 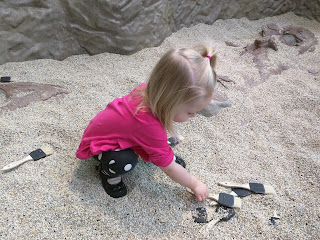 (After the Sherlock exhibit, we took her to a kids discovery area.  She loved it and cried when we had to leave.) 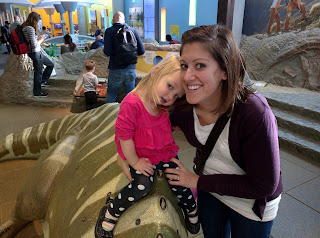 (She was afraid of falling off the dinosaur, but still humored me for a picture.) 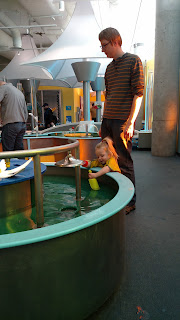 (Still in the discovery area - she played in the water with Daddy's supervision.) 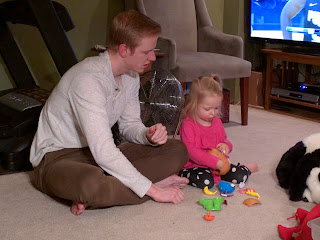 (Back at the house, Bean got to open an early present to help entertain her for the week -- a Mr. Potato Head.  Thanks Ash!  Uncle Ian was trying to help her with it.) 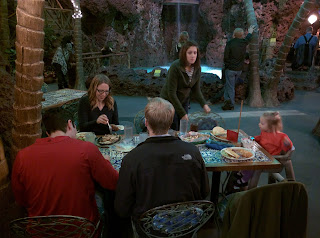 (Dinner at Casa Bonita.  We got a table in perfect proximity to the cliff divers.  Close enough to watch the little shows, but far enough away to not get splashed.  And no, the face I'm making is not in reference to the food, although it was pretty depressing.) 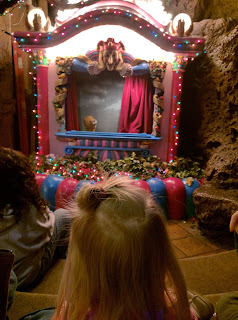 (The saddest puppet show I've ever experienced, hahahaha.  It was all about an animal with the hiccups.  The puppeteer kept asking the audience - which was comprised of me, Steve, Bean, Ashley, another lady and her son - who did not want to be there - for help with getting rid of the hiccups.  Steve and I dominated the suggestions department.) 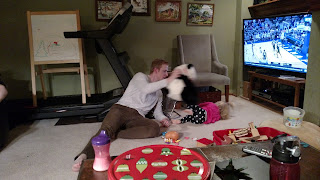 (Playing with Uncle Ian and his panda bear Johnny! Trisha had saved some of their old toys and pulled them out for Bean.  Big hits were the wooden train set and marble works tower.)

On Sunday morning, we loaded up the SUVs and headed up into the mountains for a few days.  Steve's parents rented a cabin in a very remote location that was at 11,000 feet elevation!  They live near Denver at 5,000 (which was already an adjustment for us)! Everyone experienced altitude issues in one way or another, even with constant reminders of "Drink water!"  It made for an interesting couple of days (especially throwing pregnancy sickness on top of it!).  There were several plans of skiing, hiking, ice skating, sledding/tubing, and snow shoeing while we were up there.  However, a lot of the activities got axed due to a snow storm moving through and people not feeling up to activities.  Instead, we enjoyed playing lots of games, watching movies, and even got a nice dinner out in Breckenridge.  The roads were a little scary at times and I think most of us were thankful to make it back to Steve's parents (and leaving the snow behind!). 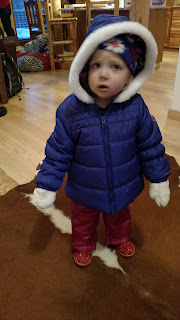 (Lucie was so excited to go play out in the snow and pretty much had to bribe adults to take her out.  She became best friends with Ian when he offered to take her out without her prodding.) 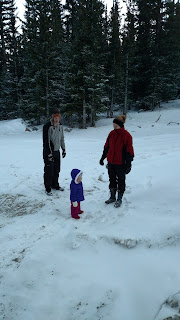 (Playing outside with Ian & Ashley!) 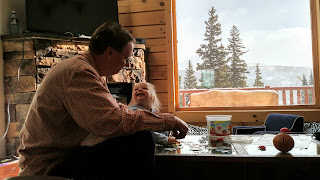 (Working on a puzzle with Poppop.)

We were supposed to stay in the cabin until Wednesday, but left a day early due to a snow storm coming in.  We got to hit up our favorite Colorado pizza joint - Beau Jo's on our way out of the mountains.  The rest of our time in Colorado was spent visiting a zoo up in the mountains, eating at a legit BBQ place, and sneaking in a brunch with Steve's best friend Steve and family! We figured it up that we hadn't seen Steve and his wife for four years.  It was fun to get to meet their two kids and chat about life.  Unfortunately, we didn't get any pictures :(. 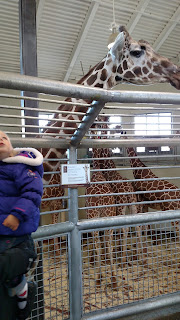 (Bean was unsure of the giraffe.  She tried to feed the giraffe some lettuce, but she quickly retracted her hand when the giraffe took the lettuce with its tongue.  Not gonna lie, it freaked me out a little, too.) 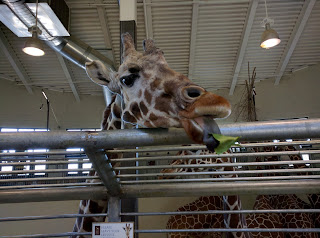 (Don't be fooled by that innocent looking giraffe.  It's tongue was super long and black and would wrap around the lettuce as it took it from your hand.) 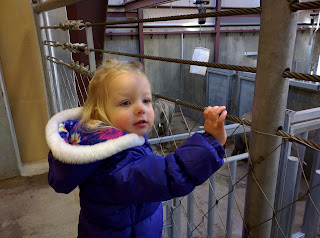 (Checking out the Elephants.  I couldn't handle standing in the elephant building.  Little too smelly for this nauseous preggo. We did get to see the elephants exit the building and go out into their outdoor area. Who knew that elephants would walk up a hill for some bagels?!) 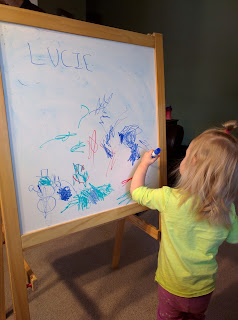 ("Coloring" at Mommom & Poppop's! The easel and markers were a big hit.) 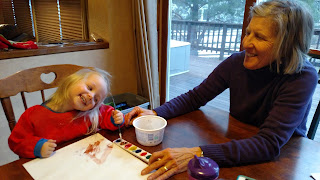 (A trip with Mommom wouldn't be complete without some art projects! Bean loved the water colors!)

And of course, we celebrated Christmas together with Steve's family! We opened up presents, enjoyed Christmas cookies, had a fabulous Christmas ham (thanks Trisha!), and even got to see Trisha sing at their Christmas Eve service.   We had packed a lot in on Christmas Eve, including packing up all our stuff and figuring out how to get it all back to Ohio (thanks Scott and Ash for taking some items!).  Steve, Bean, and I had an early flight on Christmas morning.  Everyone woke up early to see us off (even uncle Ian, much to Bean's delight) and Steve's dad took us to the airport (thanks Doug for chauffeuring us!). 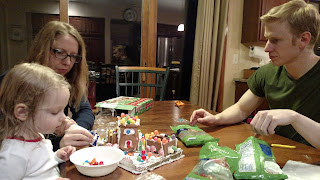 (Making a gingerbread train.  I think she consumed more candy on this go around.  Apparently it had better candy than the kit we had!) 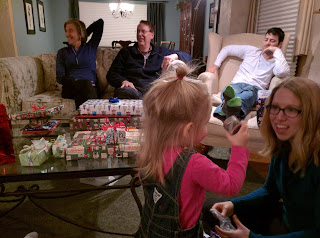 (Opening up presents! Bean made out with a ton of great gifts this year -- Potato Head, puzzle, clothes, shower basketball, Thomas RC train, and much more!)

It was odd flying home on Christmas day.  We've flown on Christmas day in the past, but it's always to leave town and go visit family.  I think knowing we were heading back to our empty home was a little bit of a downer.  We ate our "Christmas" dinner at Taco Bell and got home around 6.  We shared some Little Debbie Christmas treats and had Bean open up a few presents that "Santa" left for her.  Once we got her settled down from being back home, she went to bed and I frantically worked at unpacking, doing laundry, and repacking.  We had a 9am departure for my family the next morning. . . 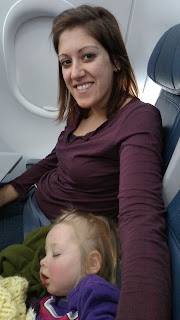 (The perk of having to buy a seat for Bean is that she has some space to lay.  However, this nap didn't last nearly long enough.  Crossing time zones is a tough adjustment for toddlers!)

We got up, ate breakfast, quickly loaded up the car and hit the road to Indiana.  We were the last to arrive at my parents for their Christmas festivities.  My family's Christmas traditions are really laid back.  Lunch consisted of deli sandwiches and lots of finger foods (nachos, meatballs, deviled eggs, etc).  The guys all played different computer games in one room while the women and children all played and hung out in the living room.  The afternoon gets a little tricky with two toddlers who need to nap, but we have a system and made it work! Once the kiddos were up, we opened up presents and continued to enjoy being together. 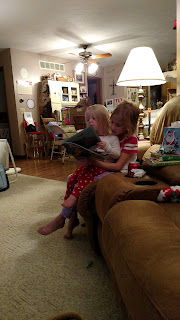 (Gabbie reading bedtime stories to Bean.  How are these kids this big?!) 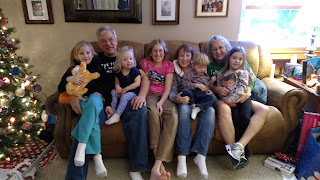 (My parents with their grandkids (sans Savannah).  This picture took way too long to get a good one and the kids weren't the problem in most of the photos, haha!)

The rest of our time in Indiana was a blur.  On Monday, Steve graciously watched Bean and my niece Gabbie to let me go with the rest of the family to see Star Wars again (thanks to Ashley, Steve and I were able to see it with his family while in Colorado while she watched Bean).  My mom had foot surgery on Tuesday and was an absolute trooper. She was up more than I thought she would be and was able to help with Bean. We made plans and met up with some college friends on Wednesday.  They live about an hour from my parents and it worked for us to swing by and visit with them for a few hours.  Aaaaand in true Ackerman fashion, we didn't take a single picture with them and their 4 kids.

We didn't do anything crazy for New Year's Eve.  I convinced my sister that we should make galushta (Romanian dish passed on from my grandma.  It's always tradition to have it around Christmas/New Year's.  My mom wasn't able to do it this year because of travel and her foot, so we jumped in to carry on the tradition.).  I spent a lot of time in the kitchen between making the galushta and snacks for New Year's Eve non-party.  My sister and her family came over, along with our friend April.  The guys played computer games, girls chatted and watched tv.  Typical Willis shindig!

We had to head back to Ohio on Friday afternoon because Steve had to work on Saturday.  There's nothing like a kick to reality by husband having to go to work on a Saturday leaving you with a Christmas-crazy toddler who was hopped up on too much attention for two weeks.  Okay, really, it wasn't that bad.  But there was definitely a few days of all of us trying to ease back into routines.  Thanks to all our family and friends who made this Christmas so great!
Posted by Unknown at 7:59 PM