It took us all several days to recover from Christmas and remember daily routines around the house.  Once we seemed back into the swing of things, I got some nasty sinus/bronchitis crud and ended up down for several days.  Steve took his turn with some crud a few weeks later.  Bean has been the healthiest of us and coincidentally officially has all of her teeth! No more teething issues (sleeplessness, behavior issues, snotty nose, crying for no reason -- oh wait, that one we still deal with) for this kid!

Bean has really blossomed into being a little girl.  I rarely see much "baby" in her anymore.  She talks non-stop (unless she's engrossed in a show or movie) and is constantly coming up with crazy play.  Her new favorite things to play are:
- hide from monsters (throw blankets over our heads and pretend to sleep)
- running around a random toy and chanting non-existent words
- puzzles
- painting (water colors)
- putting on necklaces and bracelets

She's silly, smart, and can light up a room with her smile and laughter.  I love sitting back and just watching her play and learn; however, she would much rather me be right there in the action with her at all times.  We've worked at finding a balancing of playtime with Momma and playtime alone.  I've also started to realize the potential help I have around the house and have started to put her to work! She helps unload the dishwasher, wipes up her own messes, and is great at putting things in the trash.

Only real negative with Bean is her eating.  She's never been the best eater, but she's become even more pickier.  She tends to like pasta based foods; however she's lost her love for mac'n'cheese.  Now she just eats the cheese (which causes a lot of digestive issues).  Her go to food options now are either tortilla with sour cream and cheese or spaghetti with cheese (notice a diary theme. . . ).  She's hit or miss on eating fruit (banana/strawberry/raspberry are her only picks when she wants fruit) and eats limited vegetables (only carrots and corn).  We are working on her trying more foods and have had some success with her trying, but not success with her liking it, ha.  She gets vitamins daily and I make sure she gets fruit/veggie pouches to supplement her meals.  Her top favorite meal is now McDonald's nuggets and fries.  The girl can eat almost 4 whole nuggets in one setting!

She's clueless on what's coming this summer - a sibling! We ask her if she wants a sister or brother.  In the beginning, she'd say sister, now she's changed her tune to brother (and boy does she say brother cute!).  We'll see soon if she's right or not! She doesn't grasp that the baby is in my belly.  We talk about it a lot (especially when she's jumping on me) but she doesn't acknowledge its presence yet.

Steve is in a busy season at work and working long hours (at work between 6-7:30) and even covering extra shifts (a couple Saturdays).  We all look forward to when daddy's busy season calms down! Steve does a great job at playing with Bean and being a part of the family in the evening even though he is drained from work.  Even though Bean yells, "hide!" when she hears daddy coming in, she loves it when he comes home and plays with her. They often march around the house together or just sit under blankets in a cave.

I'm back to watching James once a week and even spent a Friday night helping out Sara (James's mom) at her bakery.  I am enjoying watching James again because it helps me figure out strategies for watching two kids and helps break up the monotony of being at the house all the time.

We aren't doing any new house projects.  Instead, I've been putting a lot of my energy into maintaining the house.  Steve got to come home to a clean house for a week straight and boy was I exhausted that week. Ha! We did have to take on a shower plumbing issue for a week.  We've had our shower drain back up before - ironically an exact year from the date it happened this year.  After 3 days and 1 gallon of Roto-Rooter, we have a functioning shower again. 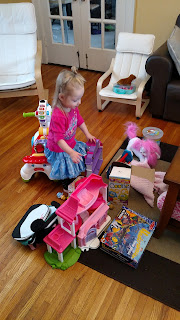 (Bean is great at cleaning up her toys! She sings a clean-up song - it's a mix of the old Barney song and Daniel Tiger's clean-up song - and excitedly puts things back where they go.  One day, she decided to re-organize and 'clean-up' the area where her toys go.  So she piled up all the toys on our rug by our coffee table instead of in front of the fire place where they belong.) 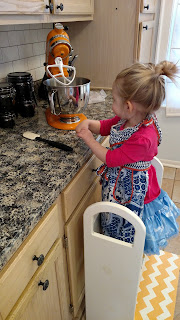 (My kitchen helper! This girl loves to help me make food.  She loves to stir and use measuring cups.  She always makes sure that we are properly dressed and wearing aprons.  She'll excitedly run to the drawer and pull one out for me and one out for her.) 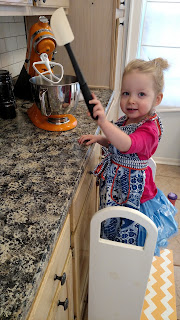 (Learning about spatulas! I think we were making chocolate chip cookies.  She especially loves it when she gets to sample the food as we make it.  Chocolate chips have become a favorite in the house. . .  And surprisingly, she doesn't care so much about the finished product.  She just likes the making of it - and again, the chocolate chips.) 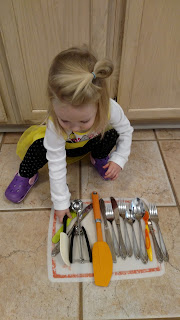 (Another job Bean has in the kitchen is unloading the utensils from the dishwasher.  Sometimes her help turns more into playing.  She decided that the utensils didn't need to be put away in the drawer, but instead needed to be lined up on a cutting mat on the floor.) 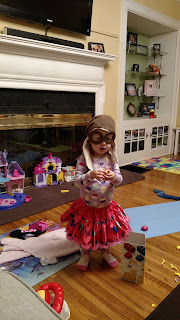 (Do I even need to explain this photo?  Bean has quite the fashion sense and is very particular about what to wear each day.  Notice in all of these photos, she's wearing a dress.  And typically, it's the same 2 pink or blue skirts.  She even wears them over her pajamas - as seen above.  She always asks if she can sleep in her dress - allowed at nap, not at bedtime.) 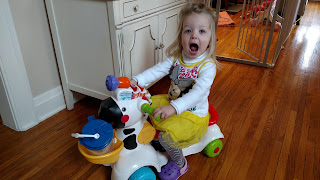 (What you see is a crazy kid on a zebra.  What I see is a water thief.  She stole my water mug, put it in her zebra, and escaped with it.  She likes to inform me that it's not Momma's water, but her water.  I do let her take sips of it, which often turns into her stealing the cup and hiding somewhere with it.) 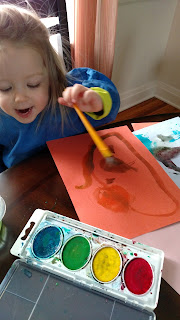 (Bean used to spend a lot of her time coloring.  Now she's given up the markers and has picked up the paint brush. Really she doesn't even need the paint, just a brush and cup of water will do the job.) 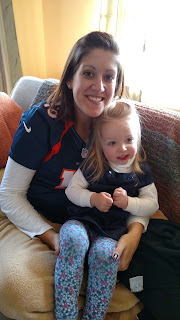 (Supporting our favorite quarterback - Peyton!  Boy was I shocked - and pleased - by the outcome of their last game.  Can't wait to see what happens at the Superbowl! Win or lose, I'll still love Peyton.) 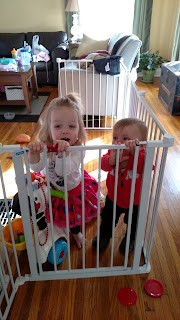 (Oh these two hooligans.  I put on a show for them and left them playing peacefully to go clean up the kitchen.  I heard, 'Let us out!  Let us OUT!" and rounded the corner to see them both pleading at the gate.  Bean did the pleading with her voice, James did it with his eyes.) 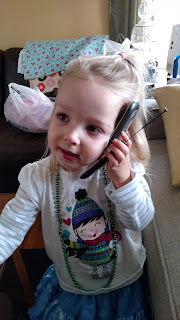 ("Hi Unca Ian!" - For some reason, Bean has decided that she needs to call uncle Ian a lot.  She talks a lot about all of both of our families and listing off everyone and things she does with them.  But boy is she attached to Ian!) 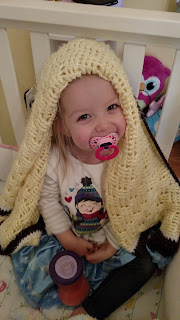 (Okay, so this is when I really see the baby in her! This girl is still very attached to her "packi" (pacifier) and "bay" (blanket).  We will be working on the packi part in the next couple months.  Bay has become like her best friend - although I don't let it go out of her crib.  I'm pretty sure she'd have it by her side constantly if I let it happen.  After nap, I'll look on the monitor and see it on her head.  Usually when I go in and ask her why, she'll say she's hiding from monsters.  This time I went in, she said, "no monsters, it's a hat momma." Well duh. Silly me.) 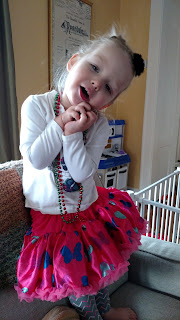 (Again, this girl and her fashion sense.  Usually some form of necklace or bracelet is on her and dresses are always a must. She cries in the morning if I tell her she can't wear her pink skirt (which she calls a dress).  She will then accept her blue skirt.  But if neither are available, you'd think it's the end of the world.  Sundays are the worst.  We have some nicer dresses that we let her pick from for church, and usually it takes a lot of negotiation to get her to put one of them on because she only wants the PINK DRESS.  She's just recently rediscovered hairbands.  Oh Joy.)
Posted by Unknown at 8:57 PM