A couple weekends ago, we had a family fun Christmas day.  Originally, we were just supposed to go to a P&G kids Christmas shindig.  However, Steve discovered that a nearby town was having a big kids festival with a parade, free activities and food.  Even though it was a little cold and going to be a lot crammed into in the morning, we decided we could make both work.

So we pulled out our winter gear, loaded the car and headed to the Christmas parade.  We found a great parking spot and didn't see many people around.  We parked right along the parade route and could have stayed in the car, but since no one else was around, we were slightly concerned that maybe the parade wasn't really going to be that exciting.  We committed to the plan and decided to walk down a couple blocks to the main area where Santa was supposed to be (he would be riding in on a fire truck in the parade).  There was already a huge line (like a block long) of parents and kids waiting to see Santa! We got some hot chocolate, a cookie, and cotton candy and waited for the parade. 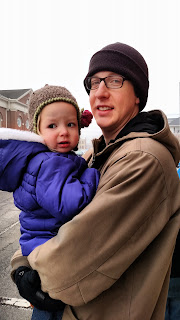 (Trying to keep warm as we waited for the parade to start!  We were told it started at 9:45 at one location.  It was after 10 before we heard it coming down the street we were on.)

The parade ended up being sort of sad and sketchy, haha.  It was a bunch of golf carts with people dressed up as characters - Mickey, Minnie, Dora, Spongebob, Bart Simpson, etc.  They got off the carts at the end of the line (which is where we were standing).  Some of the characters had candy to pass out and you could get your picture taken with them (for free, not like in Europe and big cities where they want your money).  There were also different beauty pageant winners from around the area and of course, Santa! 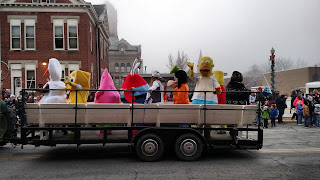 (Some of the characters being carted in - Olaf, Spongebob, Patrick, Mr. Krabs, Goofy, Bart & Homer Simpson.) 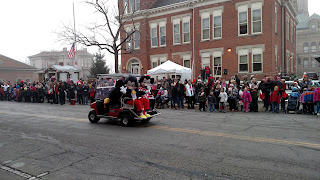 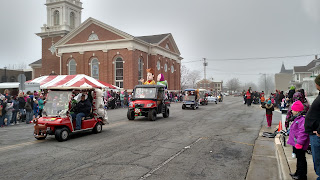 (You can see Spongebob walking around greeting the kids as the rest of the parade came in.  There was a little band playing Christmas songs on the train.) 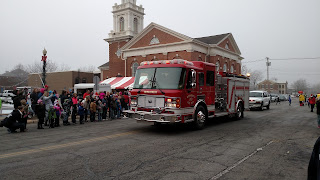 (Hard to see, but Santa was riding shotgun in the firetruck!)

Once the parade was over, we walked around downtown and scoped out some of the activities.  Bean got to make a little ornament (it was just a little card on twine that she got to put different stamps on), and even decorate her own cookie.  There were gift bags and different treats at some of the stops, too.  It was cold out and we hit pretty much what we thought she'd enjoy.  We got to stop and pet some goats and see camels on our way out.  There was also a miniature pony ride, but the line was long and didn't know if she'd enjoy it. 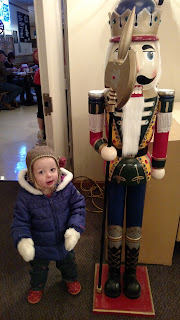 (We would pop into some of the shops and stops to warm up.  There was supposed to be a magician at this stop, but he wasn't there yet.  So instead, Bean just enjoyed hanging out with the giant nutcracker.)

So we headed back to the car and drove 30 minutes to the other side of the county for the P&G kids party.  Once we checked in, we immediately went over to see Santa.  Bean was excited to see him and walked straight up to him and got on his lap.  She acted so grown up about it! 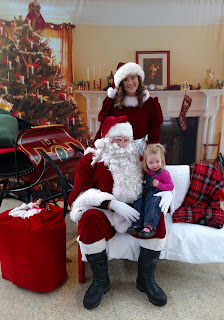 After Santa, we went to the first room where "Bean" got to stuff her own animal.  Okay, Steve and I had to do the stuffing, but she did pick out the animal.  She has really gotten into Rudolph, so she picked the reindeer.  We got to stuff one animal for her to keep and another animal to give to kids in need! Bean pretty much ran around in circles while we did it.

After making the reindeer, we headed over to eat lunch (everything was free!) - chicken strips and mac'n'cheese.  Bean actually ate her lunch! Okay, maybe not much of the chicken strip, but she did eat all the mac'n'cheese.  She even somehow pilfered a cookie off of one of Steve's co-workers, ha!

The last thing on our to do list was head to the craft room.  There were lots of tables set up with different crafts on them.  We just found a spot and did the craft at that table - make a little stocking ornament.  Once that was done, I went around and picked up a couple more things I thought Bean would enjoy.  She got to put some stickers on a paper Christmas tree and make a little foam Gingerbread girl.  She ended up naming the Gingerbread girl Sally (I think Steve came up with that) and Bean got super attached to her.  Sally slept in bed with Bean for the next week and got to color and play with her during the day, too.

After the crafts, we decided it was time to head home (there was also a play room for toddlers and a room full of bounce castles and such, but Bean was too small).  We kept Bean awake in the car (30 min) so that she could take a longer nap when we got home.  Steve wasn't feeling the greatest by the afternoon.  He woke up with a running nose and I just thought it was allergies.  By bedtime, he had a fever and was achy.  I guess since I was sick (puking) the weekend before, he was allowed a sick pass, too.  It took him a few days to get over it, but he did. Hopefully we are all through the sicknesses for awhile!
Posted by Unknown at 9:18 AM