Ever since our last cruise in the fall, Steve has been itching to go on another cruise.  When we found out we were pregnant, we realized that our window of another cruise got significantly smaller (cruise lines won't let you cruise over 25 weeks pregnant) and we knew we didn't want to leave a newborn baby for a week (or take with us).  Even though it sounded crazy to go on 2 cruises in 5 months, we realized we are crazy and booked our first Royal Caribbean cruise for the 2nd week in February.

Since I am pregnant, we decided this cruise was all about relaxation.  We picked a ship with lots of entertainment options (and didn't care so much about destination or excursions).  Once we picked the ship, we got locked into leaving out of Bayonne, NJ with planned stops in Orlando, FL; Nassau, Bahamas; and Cocoa Cay, Bahamas (private island).  We have never cruised the Atlantic Ocean before, always just the Caribbean (Steve's cruise the Pacific Ocean/Alaska, but that doesn't matter to the story).  We know it would be a weird cruise leaving out of NJ in February!

As the date approached, Steve was like a kid in a candy store.  He spent hours each night researching about the ship, things to do for our extra day in New York, and some possibilities of small excursions at ports (like Space Center in Orlando and beaches in the Caribbean).  Now I do enjoy cruises, but I'm the kind that it stresses me out until we get there.  I have to figure out all the packing, and who's going to watch Bean, plus my worrier spirit prevents me from being gung ho about the next adventure.  And THEN, we heard all over the news in the weeks leading up to the cruise about the Zika virus and causing birth defects in pregnant women. Great! That added to my stress, but after doing my own research and talking to my doctor, we decided we would be fine if we just stayed on the ship in the Caribbean ports.

The date quickly approached and I had to kick it in to high gear to get stuff pulled together.  I am a procrastinator by nature, but I always pull through.  We planned to leave Thursday by 4:30pm to head to my parents house (they watched Bean while we were gone).  By the Sunday prior, I hadn't even pulled out suitcases yet.  Steve was panicking about not seeing packing progress so I made a bet to get it all done by Wednesday night.  I succeeded except for a few last minute items I had to get at the store on Thursday (and I even got to sneak in a visit to our friends' house to see their new son!).

We made it to my parents' house in great time and got to celebrate my sister's birthday with the majority of the family.  We even got to share with everyone that Bean is getting a baby sister! Once the festivities died down, we tucked our little girl into bed and ran over the "Bean List" with my mom.  We said our goodnight/goodbyes to everyone and went to bed.  We had an early morning wake up call, got on the road and got to the airport in Indy without any issues.  Our flight ended up being delayed a little bit (would've been nice to know prior to waking up!) but we made good time in the air.  Once at the airport, we had to pick up our luggage, get on the hotel transfer, drop bags off at hotel, pick up an Uber and get to the Liberty Ferry Boat dock on the Jersey side all within an hour.  I was stressed about how the timing was going to work, but it all went smoothly.  We even were able to just go ahead and check into our room.

When I was younger, my family did an "All American" Vacation - Philly, New York, and Washington DC for 4th of July fireworks.  We only had a brief afternoon in New York and had planned to just go and see the statue of liberty. We got lost trying to find the ferry dock and missed the last boat by minutes.  I imagined this scenario happening again, but our Uber driver got us to the right area with a little bit of time to spare.  However, we found the right area, but couldn't find the dock! We knew it had to be along the water, right?? It ended up being hidden back behind an old building.  The signage was awful and it was easy to miss.  Thankfully, we made it to the ferry!

We were starting on the Jersey side, but wanted to end up on the New York side.  There were 2 routes going counter clockwise, so we had to ask someone the best way order in which to hit the Statue of Liberty and Ellis Island and end up in New York.  We figured it out and it wasn't that hard, just had to bypass a stop on the first trip.  So we started at the statue.  We picked up an audio tour and walked through the little museum first.  We then only walked up to the pedestal lookout.  Even though I've been doing great with the pregnancy (as far as hanging in there, haha), I didn't want to climb all those steps to get all the way up the statue.  Maybe next time??  Maybe. 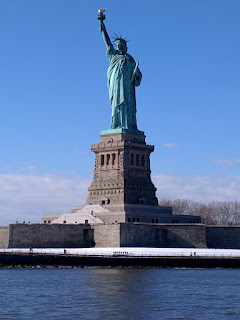 (Photo cred goes to Steve.  Have I ever mentioned how good he is at taking photos?!) 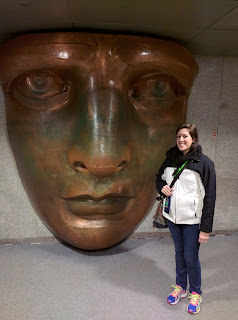 (Lady Liberty's close up.  I'm not sure what makes this photo more awkward, Lady Liberty or my fashion statement.) 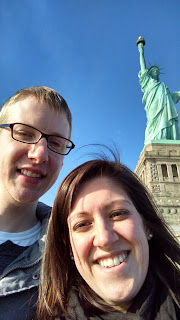 After the statue (which was neat to say we did, but not as impressive as I thought it would be), we took the ferry over to Ellis Island.  It was much cooler than I thought it would be.  My great grandpa came over from Romania in the early 1900s and came through immigration at Ellis Island.  It was neat to hear all the history (we did an audio tour) and to think about what my great grandpa went through just to find a new life in America.  What a sacrifice! I was taken aback by how many immigrants never made it through the island.  A lot were quarantined, died on the island, or were rejected and sent back overseas on boats. 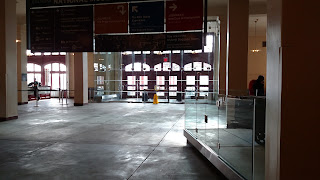 (Upon entering the building on Ellis island, immigrants would leave all of their belongings in this room before heading off for registration.  My parents have the original steamer trunk that my great grandpa brought over from Romania.  It was crazy for me to think about him leaving it there - and also having to lug it around, that thing is huge!) 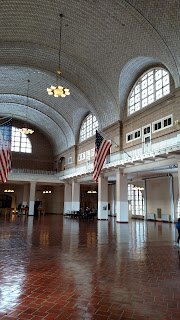 (Registration room.  Back in the day, this room was full of immigrants waiting on benches.  They would be called one at a time up to a little podium to register for entry.  While they waited, they underwent some quick medical assessments and were marked with chalk on their clothing.  Different markings met whether they had passed or needed further assessments.)

It was nearing closing time, so we left the building to go catch the ferry.  For some reason, the ferry took extra long to come back to Ellis Island.  It was a cold day and the wind coming off the water made it even worse. The boat finally came and we packed on with everyone else to get to New York.  I was done being cold and ready to just get dinner and get to the hotel, but Steve had a full evening planned.  We walked from battery park down wall street to see the bull statue (I still don't understand it), then swung by the New York Stock Exchange building (kind of weird that it is hidden in a back alley, haha).  We continued walking and made it to our dinner spot - Fraunces Tavern.  It claims to be the oldest building in Manhattan and once served as headquarters for George Washington.  We loved the rustic/historic atmosphere and especially loved being out of the cold! 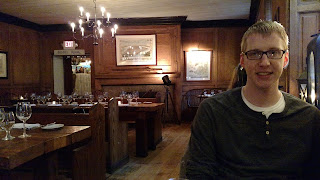 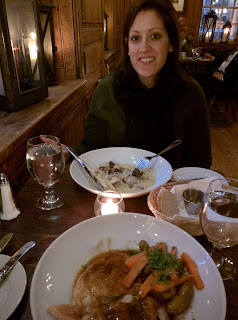 (Yum! Steve got a stewed chicken dish while I had a sweet corn and cheese ravioli.  It sounded kind of crazy but was pretty tasty!)

After dinner, we walked to the 9/11 Memorial and museum.  It was really cold, but I sucked it up.  The memorial itself was breathtaking.  There were two huge memorial pools where each tower once stood.  Surrounding the pool's rim were written all the names of those lost in each tower.  The names were etched in black granite with lights shining through and illuminating the names. In the center of the pool was a dark abyss that sucked down all the water from the cascading pool.  It is quite the site to see and I encourage anyone venturing to New York to make this a stop on your list. 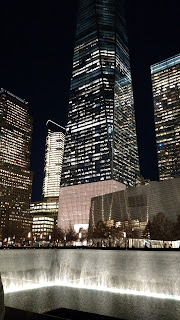 (New One World Trade Center or "Freedom Tower" with the WTC Tower 1 reflection pool in front of it.) 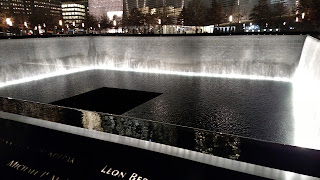 (Notice the names on the black edging at the bottom of the picture.  Water cascaded down the walls about 20 feet into the pool and then got sucked down into the black abyss in the center. It was such a serene setting.  So crazy to think of the mayhem that took place on this spot.)

After we walked around the pool, we went into the museum.  I was blown away by all the museum offered.  I wasn't prepared for it to bring on my own emotions of what went on that day.  As cool as it was to see a historical place like Ellis island, this historical place seemed just a little more real in that I remember exactly where I was when the towers were bombed.  It's weird to live history and see it memorialized. The museum itself was fascinating.  It was below ground level and built around the foundation of the towers (you actually got to see the foundation stones and walk around their edges).  There was history of how the towers were built, the 1993 bombing, and of course the Sept 11th attacks and aftermath.  The museum did a good job of incorporating media reports, artifacts (like shoes/glasses/airplane seat belts/fire engines/etc) and written information.  I wasn't prepared for the rooms filled with pictures of all the lives lost or the areas that had voicemails from those inside the towers to their loved ones.  It was a very emotional experience, but again, one I feel like everyone needs to experience. 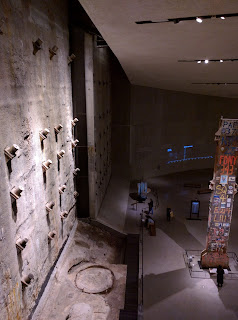 (The only picture we took inside the museum.  The left is the slurry wall that was created before construction started on the towers to keep water from the Hudson river from ruining the foundation.  On the right is the "Last Column" which was the last steel beam removed from ground zero.)

After we finished the 9/11 Memorial, we headed to the nearest PATH stop (like Subway) and took it to a main station.  From there, we picked up an Uber and headed back to our hotel in New Jersey.  We crashed for the night and excitedly woke up and got ready the next morning for our cruise departure!
Posted by Unknown at 8:54 PM