On Thursday morning, we headed off the ship, picked up our luggage and then figured out our transportation.  We couldn't decide between calling an Uber of just grabbing a taxi.  The taxis were right there, so we used them.  The ride into New York ended up costing $100! The driver was kind of crazy and it was a hassle to pay (we didn't have cash and they only took credit at the office). So he had to drive us to the office so we could pay before getting us to our destination.  Let's just say, we are true Uber users and so thankful for their efficiency!

We got to our hotel earlier than check-in time, but they had an available room ready and let us check-in (we were hoping just to leave our suitcases, so bonus for us!). It was a cold day, so we decided to spend our day at The Met (art museum).  We took our trusty Uber there and enjoyed the warmth and history in the museum.  Steve got the director's audio tour, so we just followed along that path and saw most of the museum's highlights.  Only other big art museum I've been to before is the Chicago Art museum.  The Met reminded me a lot of it (similar exhibits, but The Met is bigger).  I think Steve was getting tired of me saying, "I've seen that in Chicago" or "I'm tired, I'm gonna sit over there." We stayed at the Met until closing time. 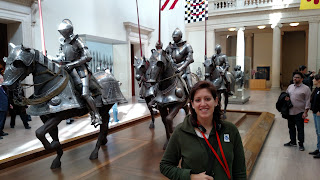 (Checking out some of the armory.  Back in Middle School, my teacher Mrs. B took us to the Chicago Art Museum as a special trip for her medieval ages class to go see their armory.  This is the point where Steve kept hearing, "I've seen that in Chicago.") 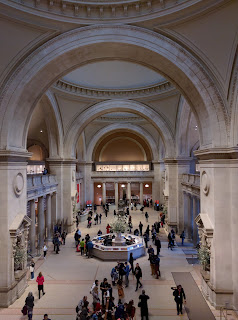 (The museum itself has some great architecture!) 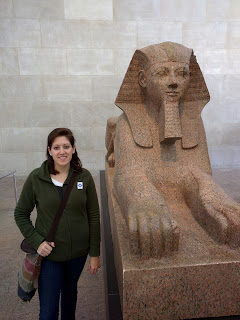 From there, we stood out in the cold for another Uber (seriously, it was super cold and windy.  I was losing it.) which took us to a restaurant for dinner -- Tony's Di Napoli.  Steve had made reservations, but we got there before our time.  They weren't busy and led us straight to a table.  Their portions are big and the server encouraged us to share.  We split a ravioli dish - and it was amazing.  Once we were fed and warm, we headed (via subway) back to our hotel and called it a day.

On Friday, we ate breakfast in our hotel.  We stayed at a Comfort Inn that was on the outer edge of Manhattan.  On the subway, it was the last stop before heading into Brooklyn.  The rooms were very small (we lucked out and were upgraded to a business room which had a little more room) and it was pretty noisy with the traffic outside.  The breakfast area was located down in the basement.  It was very crowded in the mornings! We actually got our food and then took it back to our room to eat.  After we ate and got ready, we took the subway to get to Chelsea Market.

We had signed up for a food tour in Chelsea Market and met up with our tour group.  Our guide was the hilarious - Curt Upton.  He knew everyone in the Market and was super knowledgeable of the area's history and the food.  We later figured out that he does comedy and acting on the side.  He talked with each of the tour members and would learn some information about us and then share with the rest of the group - making it into a big deal.  There was a couple from Alaska, some girls from CA, and even from Brazil.  He kept calling us by our names and whatever information he remembered.  Steve and I were dubbed "Steve and Lindsey from Hurricane Cruise".  He thought it was hilarious that we were on that cruise and would randomly tell people in the different shops we would stop in.

The tour was totally worth the money and a fun experience.  We got to go into several of the different shops in the market and try out what they had to offer:
-Cupcake from a bakery
-Steak tar tar from a meat company
-Quiche from an Italian store
-Biscuits & jam from a bakery
-Veggies & salt from a salt store
-Meat pies & Kale salad from an Australian shop
-Caramels from a candy store
-Meatball subs from a hotel (we walked there after the Market) 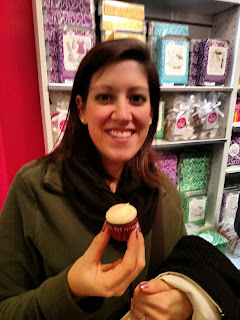 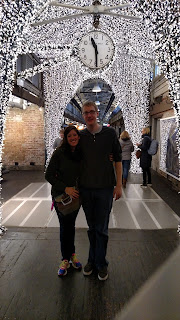 (Inside Chelsea Market.  It had very interesting decor.  It was very industrial with lots of exposed metal and beams.)

After we finished the actual Market portion, we got to go into Iron Chef Morimoto's restaurant and use this super fancy toilets.  Then we continued our walk through the meat packing district and got to see some neat views of the city.  We ended the tour at a hotel, where we got to go up to the penthouse before tasting some meatball subs in the restaurant. We laughed some more at Curt, got a couple pictures with him, then went on our way. 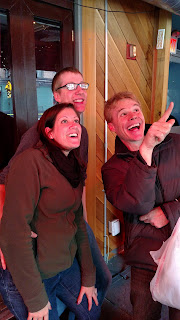 (Curt being crazy.  He wanted to stage the picture like we were looking at something. And supposedly he plays some boy that dances with Winona Ryder on the movie Little Women.) 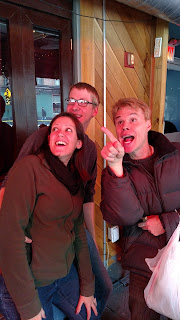 We walked back to Chelsea Market thinking we could find a quiet place to sit and maybe get another snack.  However, the market was hopping! We did one pass and decided the craziness wasn't worth it.  We called up an Uber and headed for the afternoon's activity - a visit to the Tenement Museum.  We had a set time for a tour, but was a little early.  So we killed time by watching the movie in the gift shop before our tour was called.  We went on the "Hard Times" tour which took us through a couple of the apartments that immigrants lived in during the early 1900s.  The tour guide told stories of the families that lived in the apartments and explained how they got by.  It was crazy to think about such large families living in 1 bedroom apartments with no running water.  Boy do we have it easy! 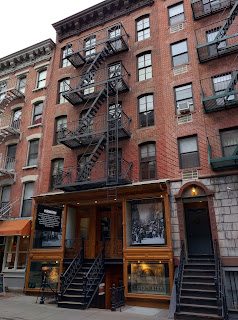 (The Tenement apartment we got to tour.  We were on the 2nd level and got to see 3 different apartments. The first one was the shape the apartment was when the Tenement Museum got ownership.  The 2nd and 3rd had been remodeled to appear like the last families were living in them.)

After the "museum" (I thought there would be an actual tour through a museum with artifacts and such, but the Tenement Museum is just a series of different apartments you tour), we used the subway system to go back to our hotel.  It was too early for dinner, so we relaxed in our room a little before heading back out.  I really didn't want to get back out, but Steve had found a BBQ place that he wanted to eat at.  We used the Subway again and had to walk about 5 blocks to get to the restaurant.  The food was really good and worth getting back out for.  There was a little bakery that my friend Sara had mentioned before we left.  There was a shop for it another 5 blocks away from the BBQ that we decided to walk to.

The Momofuku Milk Bar (the shop not the actual bar) was a little hole in the wall place.  I thought it would be more like a bakery with fresh stuff in a case.  There was enough space for 3 people to walk in the door, and then there was a counter with a couple people working behind it. We got a few cookies that were packaged.  I was really confused by the place, but when we ate the cookies later, they were good.  We had to walk the 10 blocks back to the subway, and then headed back to the hotel for the last time! 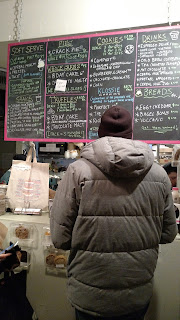 (Inside the Momofuku shop.  The door to outside was right behind me, with another little counter to the left. It was super small!)

We were able to sleep in a little, grab some breakfast, and then take our last Uber to the airport.  We worried about delays due to some weather, but only got back to Indy about a half hour later than we should've.  Boy were we excited to see our Bean again! She had a great time at Ahm & Abo's house (my parents) and was able to soak up lots of attention and playing with cousins.  It only took us a week for Bean to detox off of all the attention and about 100 "Go Ahm's house?!" questions. 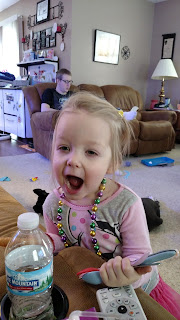 (One excited little girl to have Momma & Daddy back.) 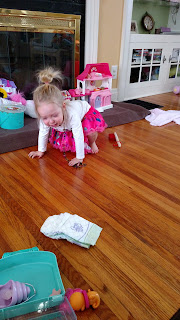 (One not-so-excited little girl to be back at home with just Momma.) 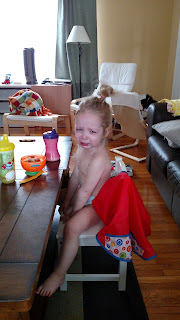