Bean and I headed to Indiana on Thursday morning. I had volunteered to help out my old piano teacher with a contest she's involved in every year.  I extended the trip by adding on some extra days to hang out with family.  Steve joined us on Friday night once he got off work.  We had two separate cars for the remainder of our Boondoggle, but we purposefully planned it that way.  We stayed at my parents through Sunday afternoon, soaking up lots of family time! 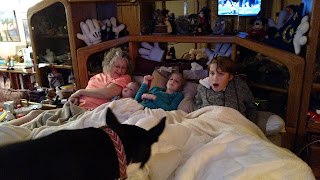 (Pile-up on Ahm's bed -- dog included!  Bean has it figured out that if she doesn't like what's on the tv in the living room, she can convince Ahm that they should lay in her bed and she gets to pick whatever she wants.  My nieces apparently didn't mind Bean's pick and joined in on the fun.)

On Sunday after lunch, we headed (in our separate cars) to Cincinnati.  I was a little stressed about the driving alone with Bean.  The only long drives I've done with her alone, is between our house and my parents.  I know all the stops and the best places to stop and switches movies for her when she needs it.  However, this time, I'd be driving unfamiliar roads and not know where the best places to stop would be.  PLUS, she started the trip off asleep.  So I was at a complete loss of knowing how well (or long) she'd sleep or how many movies she'd need.  Luckily for me, she slept almost the whole time. She was awake the last 30 min.  I was able to reach her interactive books which kept her entertained the rest of the way -- no need to stop!

We met Scott and Ashley at our favorite Cincy hangout -- Ikea! We needed to make several purchases to make up Bean's new "big girl room".  We had warned them it would be a long trip, but I don't think they were fully prepared for our Ikea madness.  In the end, we came out with an extendable bed (it can be small for a toddler and can pull out to be a full twin), a book/toy organizer, a dresser, duvet & cover, and a wall light.  We let Bean pick out the duvet cover and wall light (let's just say, I'm a little nervous about making this room pull together!).  After we made our purchases, we headed (in 3 cars now - if you are keeping track!) to dinner at -- you guessed it -- Dewey's Pizza! Yummm! 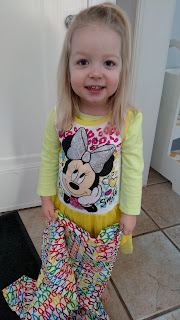 (Even though this picture is from when we got home, Bean is modeling off the "colors" bedspread she picked out.  How am I going to make that bold confetti work in her room?!)

While everyone was at work on Monday, Bean and I just hung out around Scott/Ashley's house with Tyson.  The weather was beautiful, so we spent a lot of time out on their deck!  They have a pretty sweet set up. I was able to pull lunch together (and even blog a little) all while being able to watch Bean run around on the deck.  Once everyone was home, we spent the evening celebrating Ashley's birthday! We headed out for a picnic dinner at their local favorite BBQ joint and Ash opened gifts when we got home. 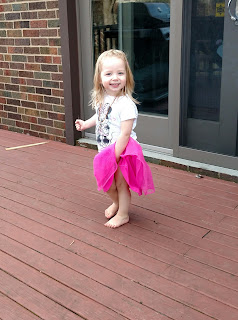 (Bean LOVED playing out on the deck.  She would find a bunch of sticks and keep herself entertained.  She also went through a phase of holding her diaper a bunch that day.  I asked her why and she just said she needed to hold it.  We've been talking to her a lot about using the potty, but she hasn't seemed interested.  Guess it is time to make her interested!)

On Tuesday, Bean and I headed BACK to Indiana to visit with friends (This is why I wanted 2 cars, so Bean and I weren't stuck at the house all day.  We were able to visit some friends and family, yet still be with Steve in the evenings!).  I was able to see two of my old roommates from college and Bean was able to play with my friend's kids and their ducks - ha! The weather was beautiful and we stayed outside nearly all day (we payed for it later with some sunburns, oops!).  After a delightful visit, we headed back to Cincy and got to the house just minutes before Steve returned home - perfect!  Scott/Ashley had run club, so we headed to an Italian version of Chipotle - Piada! We got to make our own pasta bowls.  Bean usually loves pasta, but I am never sure of what she will and won't eat.  This was a hit! When Scott and Ashley got back from running, we finished off her birthday celebration with cake - yum! 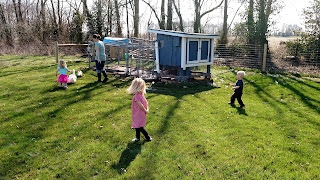 (My friend Brianna lives in the country and has a big backyard complete with swing set and duck coup.) 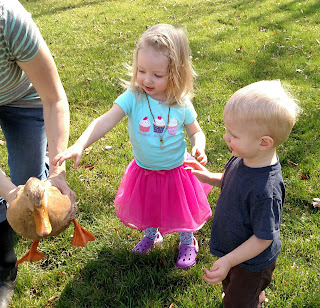 (Bean LOVED meeting the ducks.  Later in the day she said she was scared, but I never saw it while we were there! She bravely pet the duck and liked to chase it. She thought it was especially funny when Brianna tried to make the duck fly.) 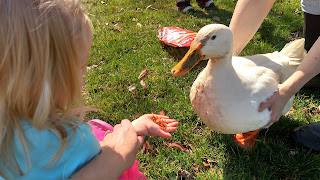 (This kid is braver than me.  She picked up a bunch of dried meal worms and put her hand out for the ducks to eat.  I wouldn't mind the duck eating out of my hand, it's the dried meal worm part that I have trouble with!) 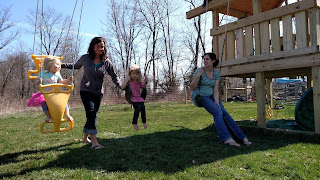 (My other roommate from college Julie came to visit, too!  Thanks for loving on our kiddos Julie!) 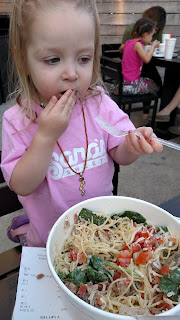 (Eating up the pasta at Piada.  I don't remember what I got.  I chose a preset dinner bowl and then added in a couple items.  It was delicious!)

On Wednesday, I packed all of our stuff up and headed to northern Cincy to visit with my aunt, uncle and cousin.  They were more than generous and showered us with love! They pulled out toys for Bean to play with and fed us both a great lunch! It was great getting to see them and catch up.  From there house, we headed home to our house.  Bean fell asleep in the car and slept almost the whole time (score again!). I got stuck in a 30 min traffic jam due to a crash.  Steve was supposed to stay in Cincy for a couple hours later, but ended up finishing early.  He left a little bit after me and I was able to inform him of the traffic jam.  He got to bypass it and we got home just around the same time.

Getting away and seeing friends and family was just what I needed!  I love our house and being a stay-at-home mom, but sometimes, even mom's go stir crazy and need their own boondoggles!
Posted by Unknown at 1:34 PM