My sister and her family chose to use the last few days of their Spring Break to come visit us! The stayed for only a few days, but we made most of the time -- and Bean LOVED all the cousin attention.  While they were here, we went to the Boonshoft Children's Museum in Dayton and spent a lot of time just hanging out at our house.  My brother-in-law was able to come along with them and Steve was able to take off a day to put him to work on our new project (blog post to come as it progress). 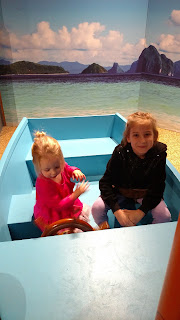 (Bean loved playi
ng in this boat at the museum.  There wasn't much to it other than sitting and turning the wheel.) 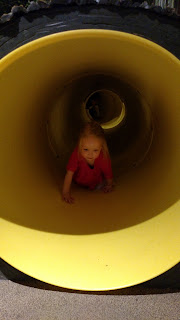 (This museum has a really neat play area in the middle that involves lots of climbing and tube slides.  Bean was intimidated at first, but would do the tube tunnel in another area.  Eventually, she put aside her fear and made my sister take her through all the tubes in the play area.  All I have to say is that I've climbed through enough of those tubes with my nieces in the past and was super thankful my sister donned her Super Aunt cape for the day.) 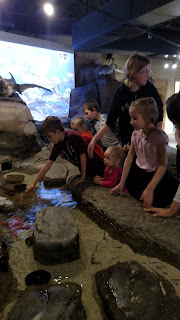 (There was a little tidal pool that you got to feel some sea creatures.  I don't think Bean was ever adventurous enough to touch the animals, but I think she did splash a little in the water.) 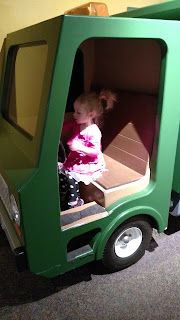 (The museum has little rooms set up with different themes.  Bean loved "driving" the recycling truck.  Which really means, she loved hitting all the buttons that made the lights and sounds come on.) 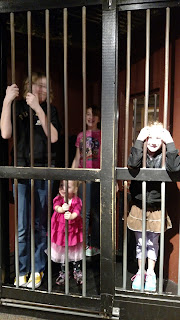 ("Help! Help! Help!" Bean got a kick out of being in the slammer.  If only they provided the parents with a lock and an hour to leave their kids in there. . . ) 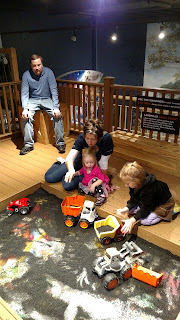 (Playing in the "dirt" - rubber pieces - and learning about landfills.) 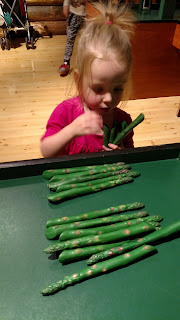 (In the grocery store, Bean formed a weird attachment to the asparagus.  She dug them all out of the vegetable bin and lined them all up on the counter.  She would go around and give certain people an asparagus, and would get upset if she found it back in the bin or given to someone else.  It was weird.) 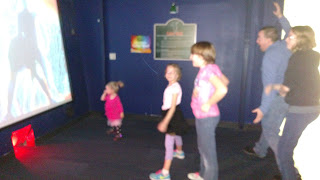 (Chris showing off his awesome dad moves in the dance room with all the girls.) 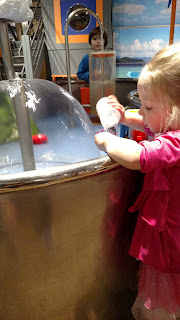 (Another huge win in the museum was the water tables.  I think I spent most of my time with Bean in the different water sections.) 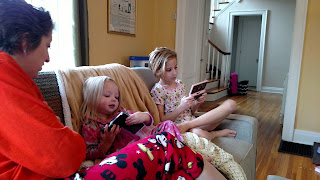 (My nieces are big on playing their tablets and gameboys.  They can link their games all together and play together.  Bean wanted to play with Gabbie so Amber helped her out.  What are aunts for?!) 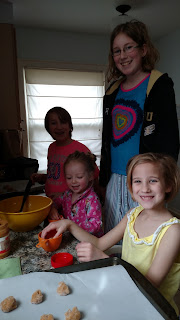 (Making cookies together - gluten free, too! They had an assembly line and each had a job to get it accomplished.  I think the incentive of getting to eat the cookies and Hershey kisses was their motivation.) 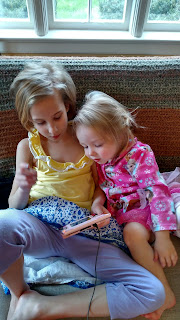 (Have I mentioned before how much Bean loves Gabbie??  She enjoys playing with  each cousin, but I think because they are closest in age, Bean latches on to Gabbie -- who is a trooper and allows it to happen.)

Saying goodbye to the family was a little rough for Bean.  We had to distract her with promises of movies and special treats for the evening.  Over the next few days, I'd get questions about when she'd see her cousins again.  Today (3 weeks later), she told me she was going to get to play with her cousins after she woke up from her nap.  Sorry sweetie, it may be awhile before that happens.  Between them finishing up school and baby sister coming soon, there isn't any IN trips in the works.
Posted by Unknown at 9:02 PM