Easter this year was done a little bit differently than we've done it in years past.  First off, we weren't even sure we were going to visit my family until we were actually in the car headed to Indiana on Thursday night.  And the other big difference is that Steve had to work at the plant on Easter Sunday, meaning we had to cut out of Indiana and miss out on my family's actual Easter celebration.  I was bummed to miss out on dressing Bean up fancy for church, miss out on family dinner and big Easter egg hunt; but we made the best of it and had little celebrations of Easter through the weekend while we could.

We had hesitated on going in for the weekend because some of my family member's were sick.  Some had been on medicine for awhile, some just starting.  We weren't sure if we wanted to risk sickness.  But we decided that it should be safe and we'd make sure to keep our distance and wash our hands a lot.  Our plan apparently worked because Easter has come and gone and we are all still healthy - whew!

Friday was pretty low-key. Bean helped me make resurrection buns for Steve (a tradition started by his mom that we enjoy passing on to Bean.  She didn't like eating them, but did enjoy the making part!).  Bean got lots of attention from grandparents and got to do whatever she wanted.  I welcomed the spoiling because it gave me a break to just relax and hold adult conversations.  Bean got a little stir crazy, so Ahm (my mom) put her to work helping to make cookies -- Bean LOVES to help baking! Later in the afternoon, my sister Amber and her girls came over. We set the girls all up to dye some Easter eggs together.  Bean loved it and would drop her eggs into the colors, which inevitably broke every egg she put in the jars.  My mom was involved in their church's Good Friday service, so we tagged along to listen to her sing.  Bean got to hang out with the other toddlers in the nursery and of course had a blast - she knows no strangers. 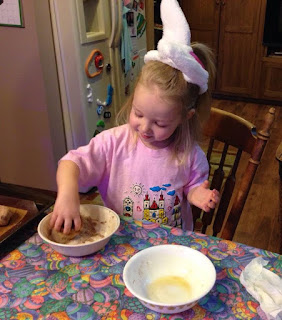 (Helping to make the resurrection buns.  I had already made them up the night before, but they needed rolled in butter and cinnamon sugar.  She loved to, "roll, roll, roll"). 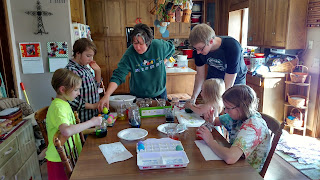 (Egg dying is always an intense process.  The girls had an assigned number of eggs, but somehow Bean ended up with a lot extra - thanks Emily!) 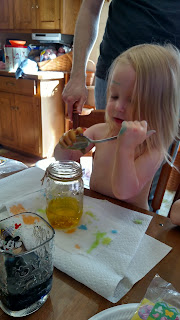 (She tried to mimic the other girls by using the spoon to put the eggs into the color, but it was used more as a dropping device which aided in the egg cracking.)


Saturday was a pretty packed day.  We started the morning off with putting new Jamberries on Bean (I'm getting pretty good at it and can do it in around 30 min when I'm focused) - per her request.  We finished up just in time to head to my aunt's house to crash their family Easter.  My mom wasn't feeling the best, so it was just my dad, Steve, Bean and I who crashed their lunch.  We didn't plan on staying long, but they roped Bean into hunting eggs with them.  One of my aunt's grandchildren couldn't come and they let Bean have her eggs. Bean had a blast (it was her first real hunt where she understood what was going on).  Thanks Nana for letting her participate! 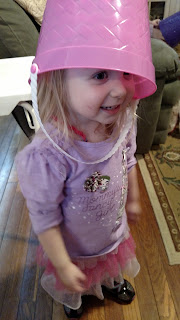 (Waiting for the egg hunt at Nana's house.  She was a little lost at this point on what an egg hunt involved or the purpose of the bucket everyone kept telling her to hold onto.) 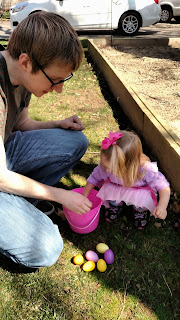 (Counting eggs with daddy to see how many more she needed to find.) 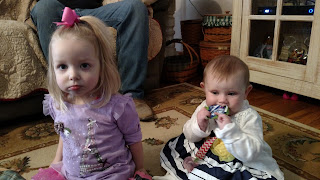 (I finally got to meet my cousin's baby Jessie!  Hannah and I were super close when we were younger and would spend the summer's at each other's houses.  It was a little surreal for me to see our kids sitting and playing together.)

After the hunt, we had to say goodbye and Steve/dad dropped Bean and I off at a baby shower.  There, we met up with my sister, her girls, and my mom.  It was getting late in the afternoon and Bean didn't get a nap in.  It was starting to show and she was melting down (could also have done with the fact that she didn't eat much at lunch and was now on a sugar high from candy).  We finally called the shower down when Bean was losing it.  My sister and her family stopped by my parents' house very briefly so that Bean could have a little egg hunt with her cousins (they did a bigger hunt with the other cousins and my brother on Sunday).

After they all left, we just spent the evening entertaining Bean and trying to keep her happy (she only napped like 5 min in the car).  She did extremely well and earned herself a movie.  Once the movie was over, it was bedtime.  Woohoo!  She had had a rough couple nights at my mom's on Thursday/Friday. Both nights, she ended up in bed with me.  Saturday must have really worn her (and us) out, because we all slept in later than usual.  I woke up in a panic because I knew we needed to hit the road for Steve to make it into work (and I still had to pack).  We pulled together quickly, said bye to my family, and headed eastward towards home.  We made it to our house in time to eat a quick lunch, before Steve had to go to work. 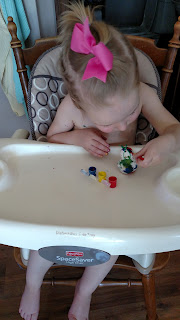 (Best way to distract Bean from how tired she is is to strip her naked and let her paint.) 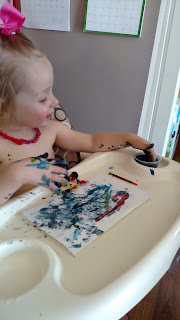 (And painting quickly turned into playing in the colored water.) 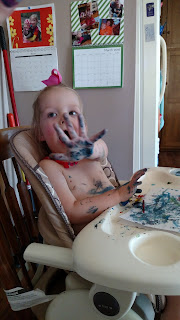 (And then mayhem broke out and she colored herself, which secured her a trip to the shower.) 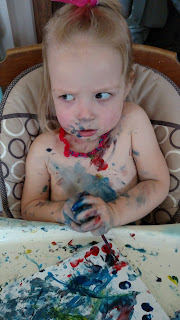 (She wasn't happy about the shower part, but I bribed her with being able to watch a movie once she was out.  She really didn't want the shower, but the thought of a movie finally won out.)

Steve only had to go in for a few hours, so he got home just around the time that Bean woke up from her nap.  Once she was up, we took her outside to enjoy the beautiful weather and let her find some Easter eggs and enjoy the contents of her Easter basket.  We then feasted on a pizza for our Easter dinner :-) and introduced Bean to "The Magic School Bus" which is currently on her favorite shows list. 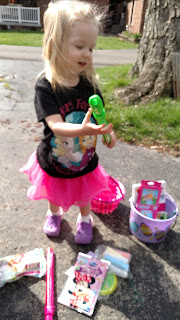 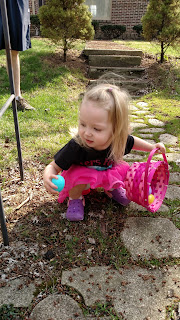 Even though our Easter was all done differently this year, we are still thankful that we get to experience the joy in the true meaning of Easter - Christ died for our sins so that we no longer have to live as slaves to sin.  We are thankful for his sacrifice and look forward to teaching Bean all about what her Savior has done for her.
Posted by Unknown at 8:56 AM