A couple weekends ago, we met up with our good friends from college who now reside in OH.  We have done several meetups with them around Ohio and this time chose to go to Homes County, known for its Amish community.  We rented an amazing cabin via airbnb and loaded up our weekend with lots of activities and fun!

Steve took a half day on Friday so we could head to Holmes County at a leisurely pace.  Good thinking on his part because we had to do some unplanned "potty" stops and a couple of planned site seeing.  We stopped in Mansfield at the Ohio Bird Sanctuary and also went back to Malabar Farm to do a little hiking trail before making it the rest of the way to the cabin.  We left the house and headed on our journey during Bean's nap time.  We had grand plans of her napping before our first scheduled stop, but she had other plans.  We got to hear lots of whining and "I don't want to sleep!" for the majority of the afternoon. 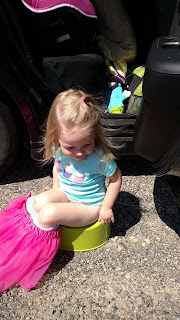 (Unscheduled potty stop.  I thought traveling while in the potty training period would be rough, but it was nice with the little potty.  We would just pull over, let her do her business, or in this case just attempt, and then be on our way.) 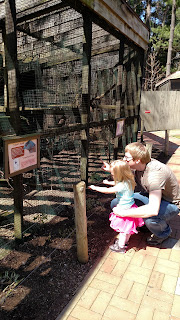 (Looking at the birds at the Ohio Bird Sanctuary.  They rescue "imprinted" birds - basically birds that can't survive in wild due to human contact.) 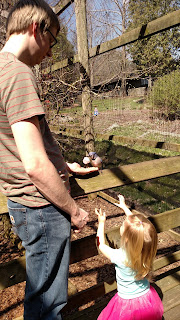 (There was a building you could go inside and try to feed/touch the birds.  Steve was successful in getting a bluejay to come and sit on his hand.  Bean did her best at being still, but she's a toddler, and the birds didn't tend to stick around her too much!) 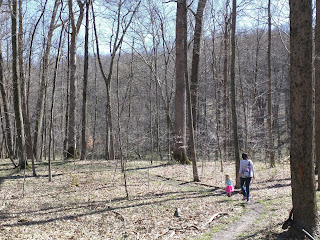 (Hiking around Malabar Farm! Last time we went, we had sought out the "Jungle Book Trail" but failed in finding it.  This time, Steve did better research and found exactly where it was.  The trail was full of different plant types and potentially animals. We didn't see any animals, but saw some of their scat.)

We got to the airbnb place just a little bit before 5pm. Literally 5 minutes from the location, Bean fell asleep.  So we looped back around and drove away 10 min, then drove back.  She at least got a little nap that would help with the long evening ahead with friends.  We got to the cabin and fell in love with it.  It was 3 levels, lots of decks and beautiful scenery.  Had a nice fire pit set up and a hot tub! We took advantage of all that place had to offer!  Our friends arrived just a little bit after us.  We threw hot dogs on the grill, the kids played outside with bubbles, and eventually we enjoyed a fire complete with s'mores! 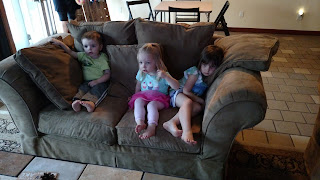 (After dinner and some ouside play, parents were already for a break - haha! Thankfully Yo Gabba Gabba gave us a nice 22 in break before it was time to go outside and enjoy some s'mores.) 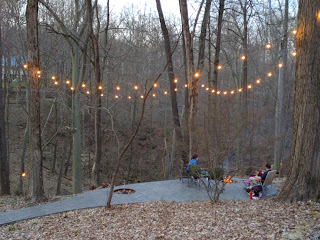 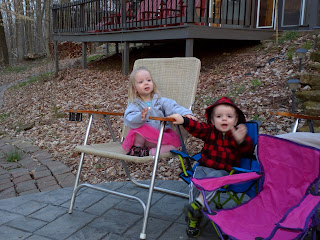 (The kids did very good sitting and staying away from the fire.  I think the bribery of marshmallows sealed the deal.  But once that novelty wore off, the kids got a little restless and sealed their fate for bedtime :).) 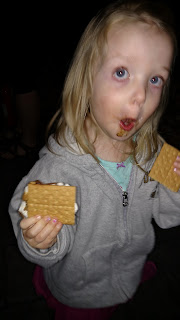 (She's had a s'more before, but doesn't remember.  She couldn't understand how this was like a cookie, and didn't really eat it.  But yet she loved each individual part - the chocolate, marshmallow, and graham cracker.  And for the adults -- we kicked our s'mores up a notch with Reese cups.  I don't think I can ever go back to just chocolate.) 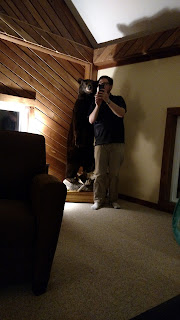 (The cabin had some interesting decor -- stuffed bears and  mountain lion.  Mitch tried to perfect his bear/selfie photo, but lighting wasn't in his favor.)

On Saturday, we had a lot planned for the day.  We started our morning off with a delicious breakfast buffet (because when you are in Amish country, you hit up all the food you can!).  From there, we headed over to a farm that boasted of it's safari animals.  We chose to ride on a wagon through the animals and were able to feed them during the ride.  The animals were all sorts of diffeerent ones (we didn't even know most of the species) - but notable ones were llamas, deer, girraffes, some sort of buffalo, yaks, emus, and some crazy ones that looked like camels/moose hybrids.  The journey started off well with llamas, but quickly fell apart as the animals swarmed the wagon.  Kids were screaming, parents were laughing, everyone was crying (from either terror or laughing).  It was the best adventure ever! 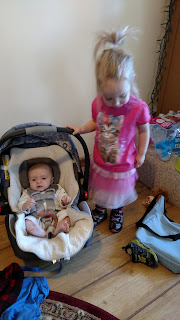 (Bean got to practice up on her big sister skills with their new baby!) 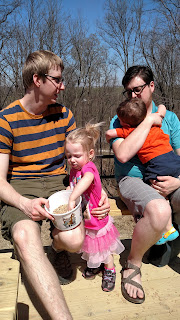 (Bean loved the animal experience.  She laughed and was very determined to feed every animal.  Our friends' kids on the other hand were terrified.  Lots of screaming and crying, which made the whole experience all the more fun for all the parents.) 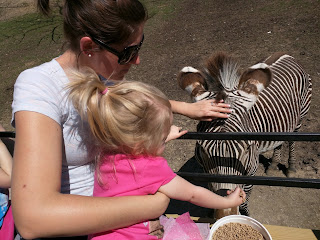 (Feeding the zebra.  So apparently, you were supposed to put the food under the bench and not feed the zebra by hand because it had teeth.  Bean missed the memo and felt the teeth - but it didn't hurt her.  We did get to pet them, though!  Other animals had no teeth and would open their mouths and you just threw the food down in their throats.  Lots of gross long wet tongues were waving all around.) 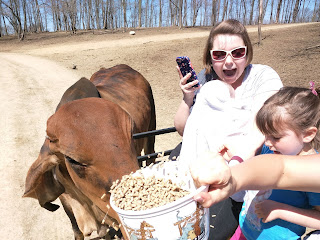 (Some animals were very aggressive and would try to get into the wagon and would take the feed buckets from you.  Alice had her hands full with her babe and daughter and this animal - maybe a cow? - grabbed at it.  I had to snatch it back and tugged the bucket from the animal.) 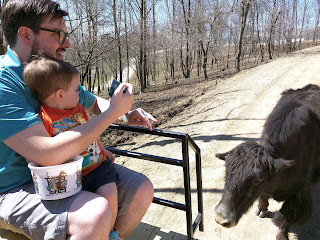 (Wilson was less than impressed wihen the animals would come up to the wagon and try to get on.  That's when the shrieking would begin.) 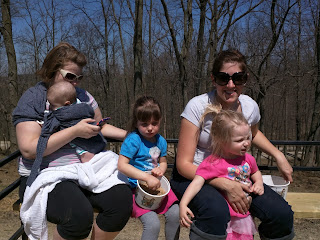 (Libby was in meltdown and wanted off.  Bean just wanted to feed more animals.  Moms were loving the emotions.)

After the ride, we walked around the farm a little and even got some free homemade ice cream - yummmy!  We deemed it time for naps and did some driving around.  We split up for a bit and met back together at a little shop known for it's "fry pies" and petting zoo.  We loaded up on snacks - fry pies, cookies, cheese, sausage - and saw more animals.  These animals seemed lame-o after the safari ride of terror.  From there, we headed to dinner -- another buffet! They just kept getting better and better. 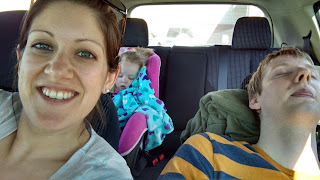 (Not only did Bean get a nap in, but Steve sneaked one in too.  We had some time to kill until we met back up, so we parked and I got to enjoy a quiet car.) 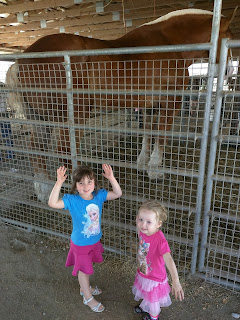 (There was a very large horse at the petting zoo that the girls enjoyed looking at.) 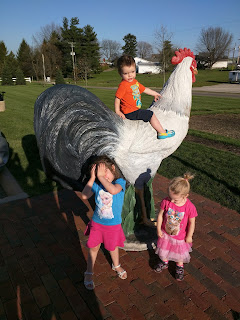 (You know, just riding a chicken outside the Berlin Farmstead Restaurant.  Wilson was fearless; the girls on the other hand had nothing to do with it. Plus the sun in their eyes made for an overall photo fail.) 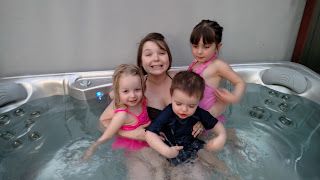 (What better way to end off a day of fun, laughter and food?? In a hot tub of course! Thanks Alice for braving it with the kiddos.  I couldn't get in due to being pregnant, waaahhhh.  After the kids went to bed, the parents got to enjoy the tub sans kids or "pk" (post kids) as we called it.  I did put my legs in for the adult time! We also got to play a games pk, too!)

We didn't have a set check out time for our airbnb.  So we had a leisurely morning of playing and packing up.  Once we got all loaded up, we said farewell to our cabin and headed to our last buffet at Chalet in the Valley.  We thought we could either order from the menu or choose to do the buffet, but Sunday's are set buffet.  It ended up being amazing (again, every buffet got better!).  This one had mostly german offerings -- sauerkraut, sausage, etc; but also had typical mashed potatoes and noodles.  And it was all delicious. 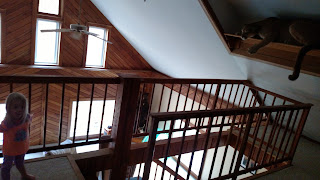 (I tried to stage a photo with Bean and the mountain lion, but it was a fail due to lighting - theme of the weekend.) 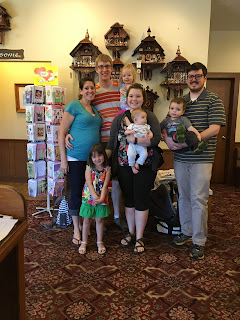 (Group photo at Chalet in the Valet after eating!) 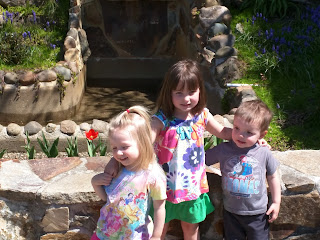 (Man is it hard to coordinate photos with kids! This is the best we could manage.)

We said our goodbyes after we ate.  But lucky for us, we will be seeing our friends for another friend weekend soon!   We again had high hopes of Bean sleeping on the way home.  Instead, we discovered we had an Ariel cd in the car that we got the joy of listening to over and over and over (and we still listen to it every time we get in the car now. ugh).  I guess her days of napping every day are coming to an end.  I was hoping it was just a weekend trend, but now that we've been home she's had a random day here or there where she just lays in bed and never falls asleep.
Posted by Unknown at 10:13 AM