We inadvertently saved the best part of our trip for last. On our last day in North Carolina, we headed to Asheville to visit the famous George Vanderbilt's Biltmore Estate. It took 6 years to build as was completed in 1895. It was constructed with steel frames that were encased in Limestone from Bedford, Indiana. The estate is home to more than 250 rooms, modern amenities (like an elevator and electricity) original to the house, as well as an indoor swimming pool. It is not known how much money it took to built the estate; however, it is estimated to have cost around $10 million. 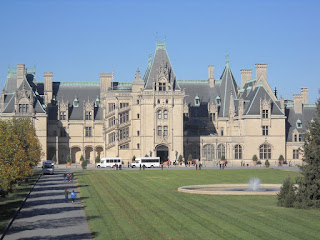 During the depression in the 1930s, Cornelia and her husband opened to the home to the public. Cornelia had 2 sons. Upon her death, her oldest son chose to take the house while the younger son chose to take the dairy farm and grounds of the estate. Today, all the admission into the house is invested back into the house, whether it be for refurbishment, decorations, etc.
It cost an arm and a leg to visit the estate; however, I think it is worth it one time. Admission is $50, audio tour $10 (definitely worth it!), and special tours offered around $17. We opted for both the audio tour and the Architecture tour. The Architecture tour involved seeing a couple rooms closed off to the public as well as going out on the roof & some balconies. One of the rooms was a "model" room. In it, was a to-scale model of the Biltmore as well as blue prints and news articles dating back to the late 1890s. 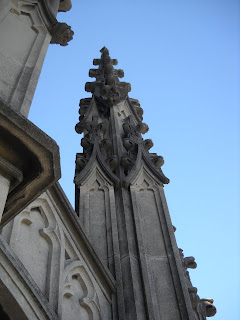 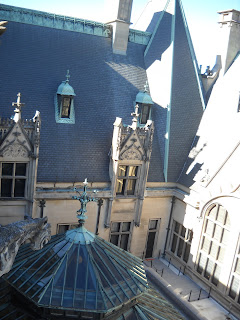 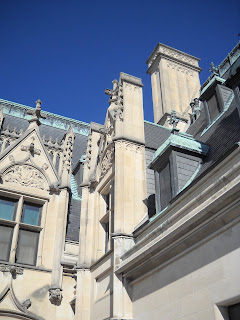 The first balcony we went out on let us see the top of the "Winter Garden" (which is like a sun room nestled in the center of the foyer upon entering the mansion). While we were up there, our tour guide pointed out some of the "creatures" (gargoyles) that surround the mansion. The Biltmore was created from several different French chateaux. On its French counterparts, the gargoyles protruding off the sides of a chateaux generally work as rain spouts. However, the Biltmore has more modern amenities like real downpours, leaving the gargoyles just for show. We also got to see the family crest that was inlaid above most windows. 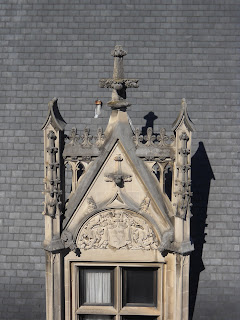 (Family Crest above the window) 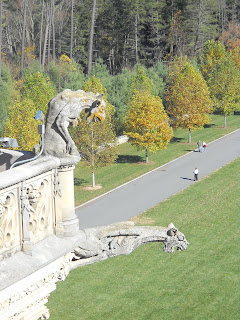 (A few of the many gargoyles and creatures surrounding the house)
Since we opted for the architect tour, we got to hear a lot about how the house was built and designed. For instance, we learned that all the decorative limestone was carved after all the limestone was placed. It's hard to not only imagine the workers carving such intricate details, but also that they did it that high off the ground from scaffolding. We also discovered that the "green" tiles around the entire top of the house is actually George Vanderbilt's initials -- G V. The tiles were carved with the initials, painted with 24 kt gold, and covered with copper. The copper has, of course, turned to the green color from the patina process. When we got to walk out on the roof (above the observatory, closed to public), we could see the tiles more closely and could see the gold poking through in areas. 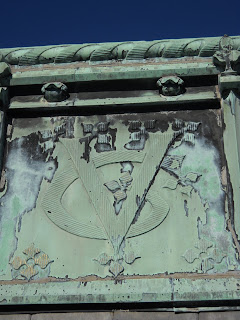 One of our favorite highlights of the Architect tour was about the roof. Again, we got a closer look at the roof while we were standing above the observatory. We discovered (we already had the suspicion) that the Biltmore has a slate tile roof (just like the house we are in process of buying!). The Biltmore's slate roof is graded at a 98% (meaning 98% of the tiles are original from 1895). We were amazed at the condition of the tile and the fact that most of them have never been touched since they were placed over 115 years ago! Steve has been doing research on how to replace slate tile (you know, just in case he has to do it at our new house. . . ), and has discovered that the hard part is just reaching the roof without damaging nearby tiles. The Bilmore's roof is super steep in some areas (almost 90 degrees at the top). I guess it's a good thing they haven't had to redo many tiles! 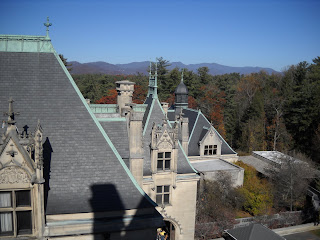 The last part of our tour took us out on the main balcony in the back of the house -- which also happened to be George Vanderbilt's favorite spot. Not only was this balcony conveniently located close to his bedroom, but it also had a view of many mountains, especially his favorite -- Mt. Pisgah. The Biltmore now rests on 8,000 acres. Originally, Vanderbilt owned 125,000 acres; however, after his death, his wife completed the sale of a large portion of the acreage to be created into National Parks along the Blue Ridge Parkway. 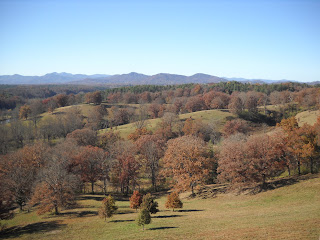 We chose to go to the estate during this time of year so that we could see it decked out in Christmas decorations. In the great room, they had a real 35 foot Christmas tree. The entire great room smelled of fresh pine. They also had the pipe organ playing Christmas music, which created a nice atmosphere in the room. We also love to go hiking and chose to visit the area in general because of the fall colors. Because we chose to go to the Biltmore during this time of year, we didn't get to see the gardens in full bloom. Instead, the gardens were a little dry and, well, dead. They still had everything manicured and kept in good condition despite the time of year and the state of the plants. 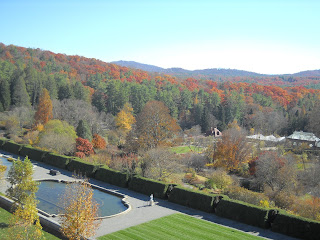 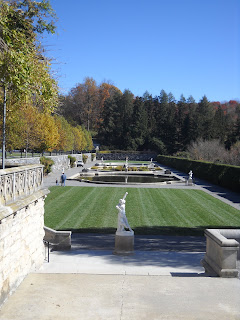 (Italian Garden)
It's amazing to think that when George built the home, he was a bachelor. He had this huge mansion all to himself until he married in 1898. In 1900, they had their only child Cornelia. He died when Cornelia was only 14 years old. He was able to enjoy his mansion for only 20 years. Again, 250 rooms, for a family of 3, just ridiculous.
Posted by Unknown at 9:07 PM