When we first moved into the house, we were astonished at the dark navy paint in the living room. By evening time, the room was really dark and gave an ominous feel. Due to the dark paint, this room became priority #1 in being repainted.
You can piece together the rooms layout via the furniture. In all the pictures, the couches and tv remain in the same locations. 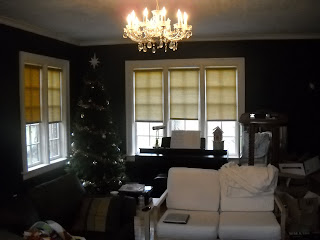 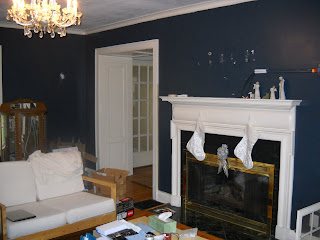 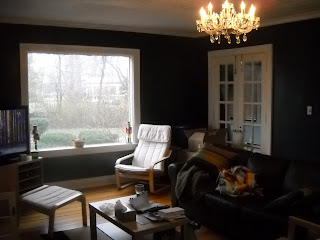 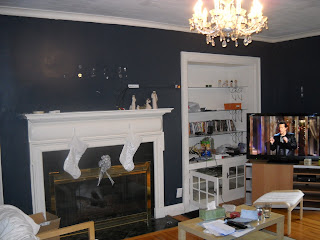 Because the paint was so dark, I had to use primer first. The walls are made from plaster and do not soak in paint like drywall. Thus, I was able to paint the entire room with 1 gal of primer and 1.5 gallons of the new color. 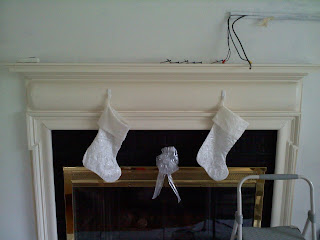 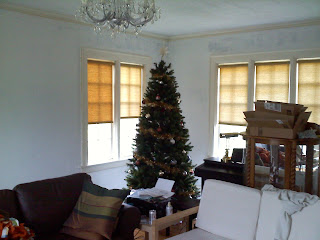 The paint color is called "Citrus Spice" (it was a Walmart Glidden paint chip, but I got it done from Lowe's and they created a custom color from the paint chip). In person, it is actually more of an orange neutral; however, in pictures it looks more yellow. Throughout out the whole painting process, I discovered the previous paint layers. I can tell you this room was once a pale blue, blood red, and navy. I know this because the previous paint jobs were not done well and previous paint still remains on trim and face plates. 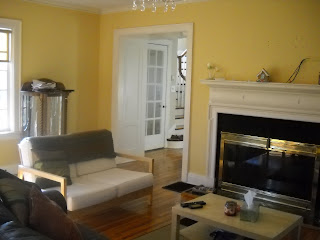 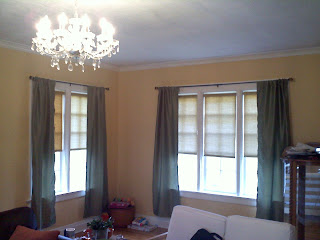 These two curtains are the same ones from our living room in Jackson. This picture probably is the closest to what the paint color actually is in person. 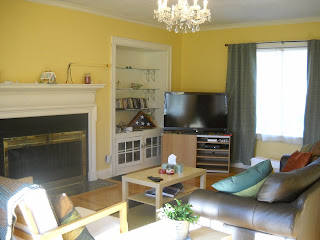 Again, the paint color is not really yellow. The camera just makes it look like that. 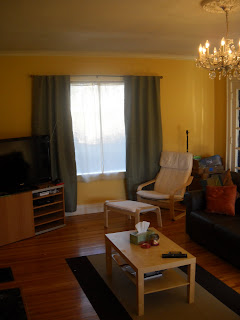 The cutrtains on this window are new. I could no longer find curtains like the ones on the other two windows (reused from Jackson). I had to use a different brand that was close in color (however it is a different texture than the other curtains). Because of the rooms layout, you would never have known without me pointing it out).
It's amazing what a fresh coat of paint and curtains do to a room. The house (or at least main level) is really starting to feel like home. Before putting up the curtains, I'd walk into a room and notice all the things that needed done and how empty it felt. Now, I walk into a room and just think "man, I love this room!".
This room especially still has lots to be done, like -- new rug, repaint trim, hang pictures, and figure out whether or not to mount the tv. However, all those things aren't as noticeable anymore (or maybe it's just me ignoring the issues). We love the furniture layout right now, but don't like the corner the tv is on. The tv is blocking the built-in and big window, but we're not sure how we feel about mounting it over the fireplace. We're not rushing to a decision yet and will take any advice on the matter.
Posted by Unknown at 9:51 AM