Yesterday, while painting some of the trim in the living room, I heard a loud thud, followed by the sound of something falling. I thought it had occurred upstairs in the house, but knew there wasn't anything important that would have fallen, so I didn't give it another thought.
I had forgotten about the noise when I saw the UPS truck pull up to the driveway. Knowing we had several boxes coming, I went to the door to meet him. I noticed that it was getting especially windy and that there were some tree limbs in the driveway. He made some comment about it getting nasty out really quick, that's when I remember the noise I had previously heard. I brought the boxes inside and went out to the driveway to see all the limbs, that's when I discovered this: 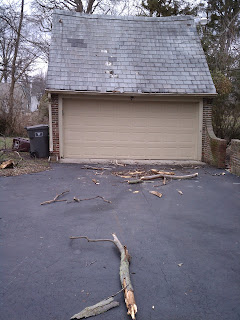 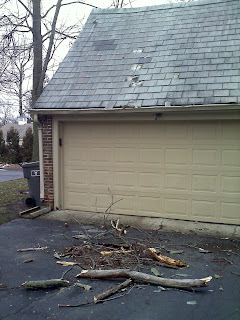 I went back inside and tried to contact Steve; however, his new job makes contacting him very hard. He has very spotty cellphone reception in the plant, so he just shuts his phone off. He hasn't been able to set-up his desk phone, so I have no number to reach him. He's also working shift hours, which involves being on the floor with the technicians and equipment. When he's not on the floor, he can generally be reached via email. Luckily, Steve's sister Ashley happened to be at the plant and was in an area with cell-phone reception. I told her the situation and she said she'd let him know when she saw him. I decided to go outside, take some pictures, and then email Steve. 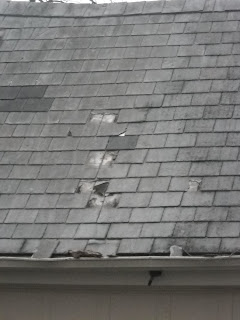 (Our roof is made up of slate tiles, which is very expensive. However, if properly maintained (and no serious damage), they can last a very long time. Unfortunately for us, the tree limb incident falls in the catagory of "serious damage". There were about 5 or 6 tiles that broke.) 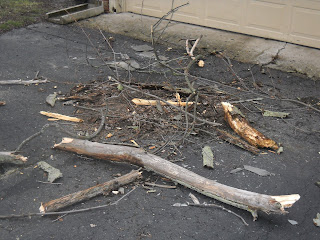 (Amongst the broken branches and limbs, are the shattered tiles.) 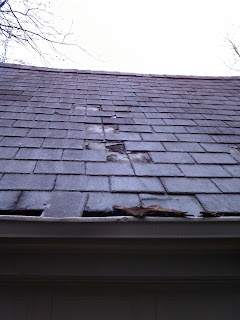 (Fixing those broken tiles is much harder than repairing regular shingled roofs. Because of the tiles, you can not walk or place ladders on the roof to make repairs. Before buying the house, we had a roofing company look at the house, and they explained that to work on our roof they'd have to rent a bucket to be able to reach the top. Luckily, Steve is tall enough that by standing on a ladder, he could reach the missing tile holes.)
After taking a few pictures, I went to go back inside the house, only to discover I had inadvertently locked myself out. Ooops. I had to contact Ashley again, asking for her to go find Steve. In the meantime, I walked over to our neighbors and visited with them until Steve was able to call me. He got to call it an early day (Well, not really early -- he is working 12 hour shifts right now, but he got to leave around the 9 hour mark). We reconvened back at the house, where clean up began. 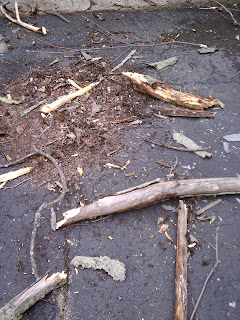 Steve did most of the work (I was still chatting with the neighbor). He got all the limbs moved and swept the debris into random piles. I then put the piles in a trash bag while he worked on repairing the roof. 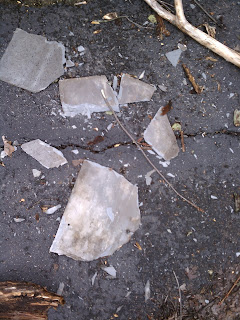 Most of the slate was obliterated. We were able to save a couple larger tiles (with some damage), but had to scrap all the rest. 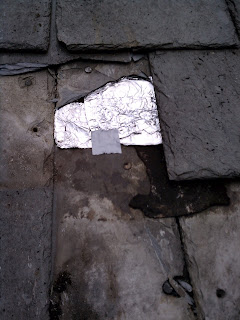 Because it was cold out, still windy, and we don't have immediate access to new tiles, we had to improvise. Most of the tiles that were damaged were a top layer, leaving some older tiles exposed. However, there was one spot (probably point of impact) that the tiles had been busted clear to the wood on the roof. We improvised sliding aluminum foil under the intact tiles, duct taping the foil together, and nailing it into the wood. Hopefully, this will protect the wood short-term through the rest of the winter. In the spring, Steve thinks he will be able to put new tiles down himself. (Although, we're still debating on making a claim to insurance and having the roofing company do it. We are open to any suggestions and advice on this issue, since neither of us have dealt with anything like this before).
We are thankful that it was only a few broken tiles and on the garage (which is more easily accessible). Had it been the roof on the actual house, or even a larger portion of tree that had fallen, our tale would be much different. Hopefully, our trees, roof, and outside land will hold off on any more unexpected issues through the winter so that we can take care of them in the Spring. We already had a long list of outside work that needs to be accomplished. "Trim back trees" & "Fix slate" were just added to that lengthy list.
Posted by Unknown at 9:51 AM