Packing it in in Cincinnati

This traveling stuff is getting old. I can't speak for Steve (who is already begging for another Europe trip), but I am sick of living out of a suitcase.  But I also know that if I didn't, I would be holed up alone in Ohio and I enjoy my friends and family too much.

Last week was a live-out-of-a-suitcase week.  Steve had training in Cincinnati (you'd think he'd be a pro with all this training :-/).  We headed there Sunday night and stayed at Ashley & Scott's house (Steve's sister & brother-in-law).  They let us crash at their house the entire week!  While they were all away working, I hung out with their cute dog Tyson.  He and I became best buds on the first day.  I entertained myself with the tv & crocheting, but Tyson would periodically interrupt that for a game of tug-o-war or running around the back yard. 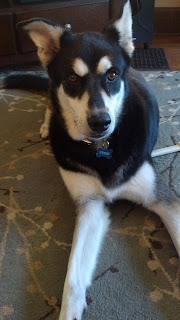 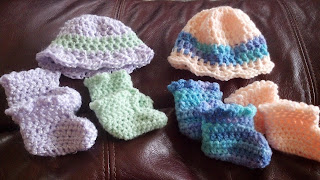 (Some of the week's creations -- I made hats & booties for my nieces baby dolls.  For Christmas, they're getting a bunch of doll stuff -- American Girl & Bitty Baby -- from me.)

While we were in Cincinnati, we did our Cincinnati Trifecta -- Dewey's Pizza, Graeter's Ice Cream, and Ikea!  We however did not do all three in the same evening, we spread out Cincinnati's goodness over several days.  Scott & Ashley had a pretty busy schedule, and we are very thankful we were able to get to spend the time together that we did!  Thanks guys for hosting us and letting us invade your lives for a week ;-).

While in Cincinnati, a good friend from high school/college reminded me of how close Cincinnati is to her home in Indiana.  The last time I saw Bree was when I subbed in Indiana last October (I stopped and stayed at her house on the way back to Tennessee).  Since we live like 4 hours apart, it would have been silly of me to miss out on seeing her (especially since her first baby girl is due in a month!).  I went with Steve to his training in the morning and then drove 2 hours to visit with her until it was time to drive back and pick up Steve.  We had a wonderful visit and I wish we lived closer so that could happen more often (but at least I cut a 7 hour difference from TN to a 4 hour difference in OH, even though they used to live in Ohio and moved to Indiana just months before we moved.)  I sadly didn't get a picture with her, but I got one of their dog!  I was having an animal week, I guess. 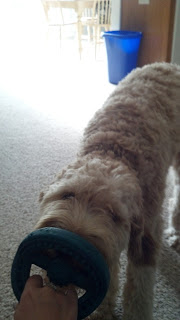 (Riley!  He was very riled up from construction workers working on the house, and he needed lots of attention.  So I played tug-o-war with him.  When I got back to Tyson that evening, he knew I had played with another dog :-/.  Sorry Tyson -- don't worry, I bought back Tyson's love with a treat the next day.)

Steve's training finished up on Friday and he knew he'd get done sometime around noon.  Since the training location and Ashley's house were 20ish minutes apart, he asked me to stay in that area while he was finishing up.  It just so happens that my Uncle Dan & Aunt Joni live 5 minutes from the training site!  So I went with him to work, dropped him off, picked up bagels, and went to visit my aunt & uncle!  I saw my aunt earlier this year at her daughter's baby shower, but I haven't been able to visit with them in some time.  They have a son (Steve) who was in a bad car accident which left him a quadriplegic and unable to communicate (although, he and his parents are able to communicate with each other).  I had an absolutely fabulous time with them!  They let me hang out with them all morning and even took me to lunch!  Just as our lunch was finishing up, Steve's training finished up.  Before leaving their house, they got their Steve laughing which was the best send off for me!  Thanks Dan, Joni & Steve for letting me hang out for the day!

We got back to Lima in the late afternoon.  I was ready to just be lazy in our house, but Steve had other plans.  We ended up taking his car into the shop to have the muffler fixed (it was rusted out in 3 spots, yikes!) and ran some errands while waiting on the car.

I loved being able to see so many family & friends during the week, but I especially loved coming home.  I'm ready to just be home and stay home, but there are a few more trips planned in the next couple months and then we hit the holiday season (where has the year gone?).  But for now, our suitcases are just sitting out waiting to be used again.
Posted by Unknown at 10:38 AM