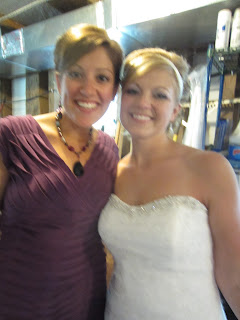 I spent most of last week in Indiana helping my best friend from grade school get ready for her big wedding. I went to Kokomo on Tuesday to spend the day with my family.  I was supposed to head to Indy on Wednesday to help her out, but she ended up wanting me to come on Thursday.  While in Kokomo, I got to spend some surprise time shopping with my mom and sister which was very much needed.

Once I got to Indy, Meg kept me pretty busy.  Her wedding was set to be an outside wedding, but there was rain in the forecast.  She and I spent all day Thursday going to 12 different stores hunting down rain boots for her to wear.  After several hours and stores, she ended up purchasing the first pair of boots from the first store. I totally called that would happen.  I had a lot of fun just running around with her.  That evening, I cleaned up her apartment while she worked on some wedding stuff.

Friday morning, we packed all her wedding decorations in our cars and we headed to meet her sisters and mom at a nail salon.  We spent the afternoon being pampered with pedicures & manicures.  I hadn't seen her sisters or mom in a very long time.  Her parents just went through a very messy divorce, and I was afraid of how the weekend was going to go.  There were times of awkwardness, but overall things went better than I expected.

The rehearsal was Friday night and was a pretty painful rehearsal.  First off, it didn't help that we were rehearsing for an outdoor wedding that was predicted to be moved indoors.  Secondly, it was the officiants first wedding.  And lastly, Meg and her husband Joel are very spontaneous people and oftentimes don't think in advance.  It was very evident in the rehearsal, just in that a lot of decisions needed to be made last minute. I had to step in a few times (hope I didn't offend) to help out the officiant.  But once decisions were made, the rest of the rehearsal went very smoothly.  I sat with Meg's dad & siblings at the rehearsal dinner.  I got to talk to her dad and "remember the good times".

That night, I stayed in a hotel room with Meg's 2 sisters (she stayed in a room with college friends and it worked best I went with her sisters).  We stayed up way too late laughing and giggling and all sorts of stuff.  Her younger sister (in high school) has a baby and it was neat to get to talk to her and hear her side of the experience.  She later told me how much she looks up to me and appreciated the time we got to spend together.

It of course poured on Saturday which sealed the fate of the wedding being moved indoors.  All morning and afternoon were spent just hanging out at the hotel getting ready.  A family friend came and did all of our hair. One of Meg's photographers was a good friend of mine in high school and it was weird seeing him again.  We were supposed to go to downtown Noblesville (where the wedding was located) to take pictures but that got changed due to the rain.  We ended up just heading to the wedding location (like a garden/nursery).  We decorated inside the barn (where the ceremony & reception would take place) and had pictures taken.  Steve showed up with my parents before the evening ceremony.

The ceremony was so them!  I could see both of their personalities in the music, the vows the wrote, and the words that the officiant shared.  It has been pretty neat watching Meg grow throughout the years, meet Joel, and now marry him.  I got to serve as her Matron of Honor and even gave a speech at the reception.  Everything went off without a hitch, despite the rain.  Some of my friends from high school came, and it was pretty exciting to get to catch up with them.  My parents left the reception before we did.  Since Steve came with them (he actually came into town Friday night and hung out with my dad & brother-in-law) he was able to go back with me that night.  We didn't stay for the whole reception, I was pretty tired and ready to relax! 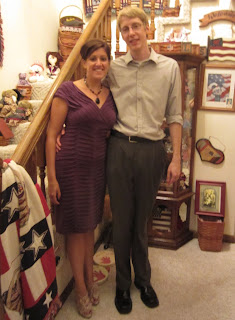 It worked out great that Meg chose to get married labor day weekend.  That way, Steve and I were able to spend time with my family with our extra day.  The Adamses came and hung out at my parents' house Sunday.  The guys did their usual gaming while the girls played cards, watched movies, talked, and played Wii.  The girls (and Amber), stayed Sunday night, allowing more play time together Monday morning. In the afternoon, we had a cookout with some extended family coming.  My brother and his family showed up just before Steve and I had to leave to head back to Ohio (in our separate cars).
Posted by Unknown at 7:44 PM