The blog, a lot like my life, seems to be feast or famine.  Generally, when I'm absent on the blog it's because I'm too busy with life happening.  Once life slows down, I'm able to catch back up on the blog.  For the past week and a half, I have been knee deep in a bedroom overhaul.  And no, it's not for the baby.  The nursery is still sitting empty and white.  In a few more weeks we'll find out the gender and decide on the color scheme for the nursery!

Okay, but back to the overhaul -- we are now enjoying a brand new (well it seems that way) master bedroom.  I didn't have plans to redo the bedroom anytime soon, but Steve felt otherwise.  Ha!  I liked the colors that were already on the wall, especially since it happened to match our existing bedspread and curtains nicely.  Steve felt the room was boring and dull and wanted a change.  We both realized that if we --haha, who are we kidding -- if I*** didn't do it now, it wasn't going to get done for a very long time (like baby's 3rd birthday). 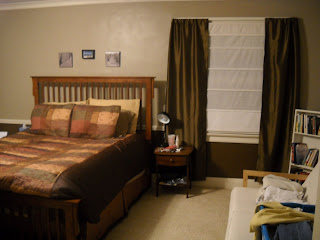 (So maybe Steve is right and that the room was boring and dull.) 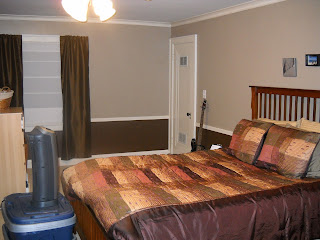 (How lucky were we that the brown on the bottom of the room was identical to our curtains we bought in TN?!  I was set on this room staying these colors, but now I can't imagine going back.) 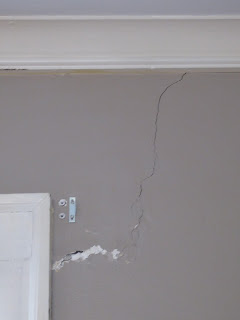 (Because our walls are plaster, when the house settles -- or as holes are put into the walls -- the plaster tends to crack leaving these lovely lines all along the walls.  I would chisel away all the raised parts, fill it in with my joint compound, and sand it all before painting.) 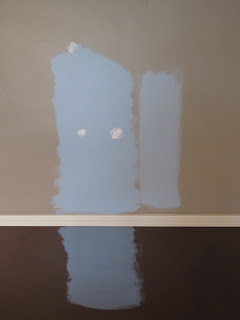 (First thing was to pick new colors.  3 samples from Lowe's later and we had settled on the 2 colors -- the color for the top is the one on the right, and the color for the bottom is, well, on the bottom!  The colors were picked out a few weeks prior to the project officially being started.  So we just dealt with the random color splotches for awhile.) 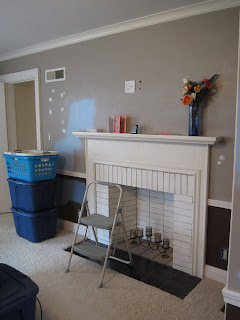 (Once the project was a go, I had to go around patching up all the random holes & cracks around the room, as well as box things up and move furniture.  Don't worry, all heavy lifting was done by Steve!) 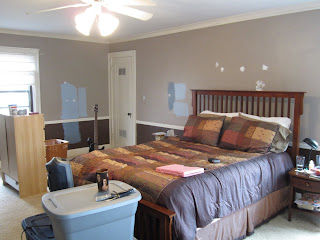 (This picture was from before the bed was moved.  We slept with the bed in the center of the room for about a week.  Even though the bed was only moved a few feet, our whole sleeping mojo was thrown off.  I also got sick of having to move around between all the furniture -- couch not pictured.  Those things alone are why I gave this project 100% of my attention for so many days in a row.  I just wanted my room back!) 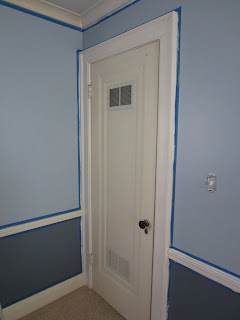 (Next came the color.  I painted the bottom portion in 1 day.  I didn't tape the trim off since I knew I was going to repaint the trim.  I just made sure to not get too much paint on it.  I spent the next couple days painting the light blue on the top.  Then it was time to tape off the hole room - which was a day in itself.  And then finally after a couple of days of trim painting -- all the painting was done! Or so I thought. . . Then I remembered I hadn't painted the doors, so that still needs done.  You can see in this picture out he door frame is a clean new white and the door itself is an old yellowed/ivory color.) 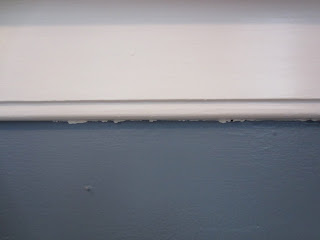 (Taping off isn't perfect.  Since the walls are imperfect, the tape doesn't seal at all the edges -- even though we popped for the expensive Edge Lock.  Not worth it.  The $6 tape does the same job the $3 tape does.) 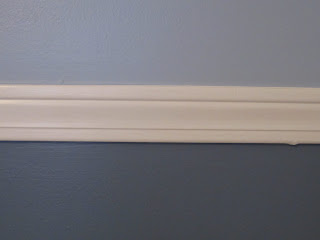 (Because we are both a little OCD and perfectionists, I went around the entire room with a little paint brush fixing the tape splotches by hand.  Ahhhh, clean crisp edges now!) 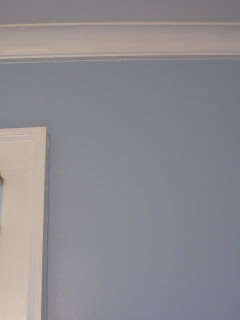 (Remember that picture in the "Before" section with the big crack??  This is that same corner!  The crack is completely hidden and the wall looks awesome now!) 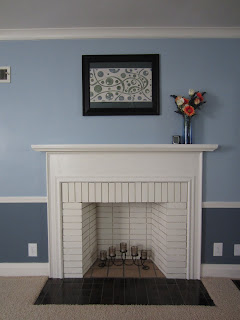 (The room now looks completely different!  Originally, I was going to repaint all the brick, but after realizing only myself - and now blog readers - would ever know I chose to let the bricks remain the old color.  And after all -- who paints brick?!) 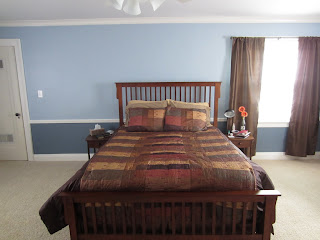 (I need to put the pictures back up above the bed, but other than that - and still painting those doors -- the room is done!  Ahhh it's so nice to have the bed back in its spot again! Mojo restored :)!  I personally like the brown curtains and bedspread against the blue walls.  We'll see how long they last.  Steve isn't sold on the color scheme yet.) 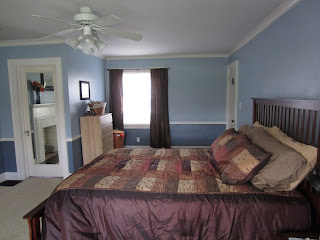 (After walking through a maze of furniture, tools, outlet face plates, and other random items for a couple of weeks, our room feels so much bigger now!) 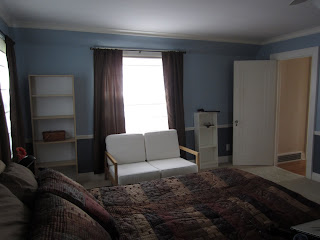 (And one more shot of the empty book cases.  The little one is going to graduate to the nursery and we're not sure yet what to do with the other one.  All the books that it once held are in boxes in our upstairs room -- ha!)

So now that the room is all done, I'm back to life slowing down again.  Until the next project!  There's a few more rooms that need to be redone in the house, just not sure if they will be pre or post baby.  We'll see how things go with the nursery and yard work that have priority.

***Note:  I did research on painting, etc while pregnant.  I used special paint that had no VOC (volatile organic compounds) and no odor (okay, the wet paint had a little odor, but it dried without it -- which was so worth the extra expense!). I also made sure to wear a respirator both while using the joint compound & sanding as well as during the painting process.  I also had the windows open while paining to make sure there was lots of air circulation.  I painted at my own pace and would take breaks if I got tired.  The only thing that I would change would be to give myself more time and not just a week to get it all done; but that was mainly due to the fact that we didn't sleep as well in the chaotic mess.
Posted by Unknown at 1:01 PM