Before going to bed last night, Steve and I had a discussion on how it seems unreal that I'm pregnant (well, he said that we're pregnant, when I kindly reminded him there's no baby in his belly, but he's right -- WE'RE having a baby!).  He doesn't have the daily reminder of feeling different to keep it at the forefront of his mind, but things are starting to change!

I know I haven't really said much about being pregnant, and that's mainly because in the beginning, not much had changed.  I don't mean to brag about my pregnancy, but I want to share what I've experienced.  I have had a pretty easy pregnancy, thus far.  I was one of the fortunate women that didn't have to deal with pesky symptoms like vomiting, food aversions, and round the clock nausea.

Now I'm not saying it was perfect.  During the first trimester, I had zero energy, I mean ZERO! I had things I wanted to get done, but the couch always called my name.  Just getting up to go get a drink from the kitchen took lots of pep talk.  Once that second trimester rolled around, the energy has come back in full force! (Now it's just finding the motivation. . . ).

I also had to deal with some unexpected symptoms that all pointed towards miscarriage. However, after an unplanned ultrasound, we got to see our little Bean and learn that I just had a bleed in the uterus that would heal itself - whew!  So I guess in that aspect, I did have to deal with some worry and stress that a lot of other women don't have.  I'll take random implantation wound over vomiting any day!

Without having morning sickness everyday, it was hard to wrap my head around being pregnant.  Now, I did have a couple weeks where I'd get nauseous in the evening. Or sometimes I'd have random heartburn.  But day to day, I didn't really have any reminders that I was pregnant.  Sometime within the past week or so, I'd say all of that has changed!

Every pregnant woman wants to have a bump to show off, and I was no different.  I could tell my body had grown, but unless you looked closely, you couldn't really tell.  Sometime this week, I was cleaning in the bathroom and looked in the mirror and thought, "Whoa!  When did that bump show up?!" Maybe it's been hidden from all the sweatshirts I've been wearing.  With the warmer weather, I am now wearing less layers and more t-shirts.  Or maybe Bean just had a growth spurt.  At 17 weeks, my uterus is the size of a cantaloupe!

Oh and another reason why I'm finally "feeling" pregnant.  All along, my abdomen has felt sensitive.  Maybe it was more mental and just having to remind myself there was a baby there.  But now, it's not mental and physically feels sensitive.  I can also feel my uterus growing, I know that sound weird, but I can.  It's even harder to the touch which is so bizarre.  And the best of all??? I can feel little Baby Bean fluttering around!  The best way to explain it is like a muscle spasm, but I know there's no muscle spasm going on.  Everyone else says like gas bubbles or twitches, which I understand.  I just like my spasm metaphor better - ha!  Baby is still to little to feel it on the outside, yet.

I've been trying to take pictures weekly to catch the changes, but I'll spare you all the pictures and show you the first one and the latest ones! 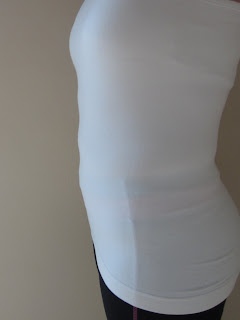 (This was right around 5 weeks, just after figuring out I was pregnant.  I take each picture wearing the same outfit to really show off the changes, so bare with the tight workout pants and tank.) 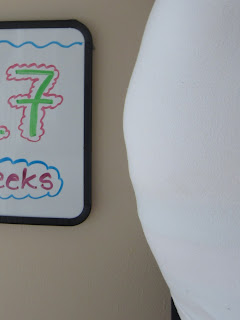 (17 weeks!  So crazy.  While taking this picture, I noticed some random bulge near the top, haha.  I'm not sure what that's all about, but I guess it just shows everything shifting and changing.  So far, I've only gained 8 pounds.  6 of those pounds were gained by week 10 - proof the placenta forming is a big deal!) 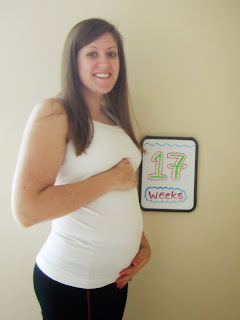 (You would think that I'd be taking all my pictures this way, but not until yesterday did I figure out that if I put my camera on a timer and put it on my dresser, I could do a full body picture.  Let's just say, that pregnancy brain is a real thing!  I'll spare you all the other stories I have of how my brain has stopped working!)

So technically, I could find out now if Baby Bean (whom is named that because it's our little Lima Bean) is a boy or a girl, but my doctor wants to wait until week 20 in order for the ultrasounds to be spaced out.  After waiting this long, what's another few weeks??  Only sad part is that week 20 falls while Steve is on business in Europe -- no I don't get to go this time :-(.  I have an appointment in the next week and I'm hoping to convince the doctor into a week 19 ultrasound.  Ha, we'll see how that works out!
Posted by Unknown at 9:09 AM