So I know this post is like a week late, but a lot has happened this past week (which you will catch up on with an update tomorrow).  But before you're caught up on a crazy week, let's rewind to Easter:

We headed into Indiana on Thursday night.  Steve really likes to travel in the evenings.  Even though we have to drive facing the setting sun, he really likes to be able to go to sleep and wake up in the place he's going to be at all day.  (I sort of agree, if you have to wake up and travel 3 hours in the morning, but they time you get to where you're going, you're sort of foggy from all the travel).

Friday we just hung out at my parents' house with my good friend April.  She's way more than a friend and practically a sister.  She hangs out with my parents probably more than I do - ha!  Later in the day, my sister brought over her 3 girls (who were on Spring Break).  The rest of the day consisted of Easter crafts, baking, laughing, watching cake challenges on Food Network with the little girls, and I can't remember what all else. I think dad and Steve just entertained themselves with computer gaming.  When we return home, Steve pretty much fends for himself and hangs out with my dad, letting me soak in all my family time.

Saturday was crazier.  I woke up early and met my good friend Brianna in Kokomo.  I left my car in a parking lot and joined her and her 5 month old daughter in their car to drive 2 hours North to Mishiwaka.  Our friend Courtney from college was having a baby shower.  I wasn't going to go, being since it was Easter weekend.  But it worked out perfectly.  Almost all of my friends from college were able to make it.  So not only did we get to see a very pregnant Courtney and celebrate her baby; but also got to have a little mini college reunion, see everyone's cute babies, and share in pregnancy stories.  Among our little group, their were 5 little kids (not all there at the same time) and 4 pregnant women!  I am so glad I went and got to see all these great ladies that helped me through college! (Most of these ladies are from the group we get together with each year, too).  It was especially great to catch up with Brianna during our 4 hours together in the car & playing with her sweet baby April, too! 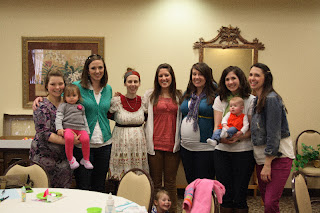 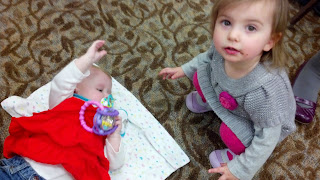 I got home after 5 on Saturday for a family dinner.  Everyone was finishing up (we had a big lunch earlier and I wasn't hungry) and I got to see my Mammie, brother & niece.  We were supposed to have our annual Easter egg hunt, but it didn't work out.  So instead, we just sat around talking.  Eventually, I got roped into a game of Clue with Emily, Allie, & April (Allie & April were a team).  Emily had only played once before and did a pretty good job; however, she forgot to check her cards a couple of times which made Allie predict a bad conclusion.  We called the game done and everyone winners - ha! 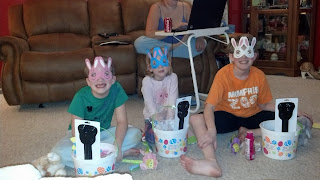 On Sunday, we headed to church with my parents.  My oldest sister is in charge of the kids church each week.  On this specific week, my other sister and mom were also assigned to help out.  My dad was on praise team and also worked in the sound booth.  That gave Steve & I the decision to sit alone in the service or help out in kids church -- we chose the kids!  They were understaffed so it worked perfectly.  He and I were in charge of snack -- decorate your own cupcake!  I would take the kids to the bathroom first, allowing him to set up napkins, drinks and cupcakes for the kids to return to.  Then we helped with the icing and sprinkles, talked with them as they ate, then we all cleaned up.  I think there were 4 rotations and most everything went smoothly!  After church, we went over to my grandpa's retirement community for an Easter lunch.  There, my parents, sister, aunt, uncle, grandpa, Steve & I, enjoyed a pretty good Easter meal.  After we were done eating, we said our goodbyes.  Steve & I headed back to Lima (while my parents had to go to my brother's in Lafayette to help him with his car that had broken down the night before).

The best part about Easter was rejoicing that our Savior Lives!  We do not serve a God that is dead, but one that is alive and present in every aspect of our lives.  We are so thankful for Christ's sacrifice and hope that you, too rejoice in his resurrection!  Happy Easter!!
Posted by Unknown at 10:59 AM