Last week, we got to return to our old home state of Tennessee for business & fun.  It just happened to work out that Steve needed to do some equipment testing in Knoxville the same week we had planned to visit dear friends in Gatlinburg for the weekend.

We headed out of Lima on Wednesday afternoon.  Steve was able to take a half day (counting the other half as travel for work).  We picked up a rental car from in town (which was a fiasco because we showed up a little later than we said we'd be there) and went on our way South.  Halfway there, we stopped at a rest stop and switched drivers.  I was on the lookout for a food stop while Steve slept; however, we ended up in an area where there weren't many options.  I toughed it out for as long as I could when we spotted a Chik-fil-A - score!  Steve resumed driving and we got to the hotel around 9.

While Steve was testing equipment, I stayed back at the hotel and entertained myself.  I brought along a blanket project that needed to be finished up before we met up with our friends.  Luckily, I finished it that night!  Steve got off work in the early evening.  We then headed out on a driving tour around Knoxville.  Only problem was that the first stop was to pick up the tour from a visitor's center.  Online it said it was open til 6; however, it was closed when we got there at 5:03.  The sign on the door said closes at 5.  Good thing we have data plans and the amazing internet.  We were able to find an abridged version of the tour and went on our way.

The tour mostly consisted of stopping at sites (stops ranged from an old house that a general used as headquarters to a hill with a new church built on it).  We looked through the list and weeded out the "at this spot" stops and tried to find things still in existence.  We found a little lookout that used to have a fort on it, but only the boundary lines remained.  I was getting hungry and tired of the civil war stops, so we returned back to civilization and ate dinner at P.F. Changes - yum! 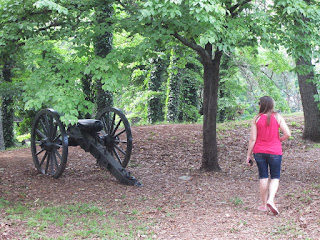 (Walking around the boundary line of the "once was" fort)

Friday morning, we met up with our friends at a mall nearby our hotel.  I needed to get my 6 month ring cleaning (to keep up the warranty) and it just so happened that our friends needed to go to the same mall to pick up a tux for the wedding they were attending.  After a not so organized departure from the hotel, we met up with our dear friends Jake, Jennifer, & their new little additions Kate & Henry!

Jake and Steve used to work together at Pringles, leaving Jennifer and I to hang out together! We usually would try to all meet up for lunch every other week.  After lunch, the men would return to work, while Jennifer & I returned to my house to hang out (anywhere from mindless television watching, to coupon trading, to endless talks).  They left TN just before we did.  For a few months, we actually used their house as a pitstop along our route to IN & OH.  In fact, we stayed with them the night we moved out of TN and headed to our new house in OH  -- meaning, we hadn't seen them since December of 2012 -- too long!!

Okay, back to the TN trip.  While at the mall, we got to meet their two new adorable children Kate (10 months) & Henry (4 months).  We sat with them for awhile until they had to head off to meet other friends.  Steve and I went ahead and travelled towards Gatlinburg.  They'd catch back up with us on Saturday evening in Gatlinburg after all of their wedding festivities (which was what brought them back to TN).

Friday night and Saturday were spent visiting different motor trails around Gatlinburg and waiting to meet back up with our friends.  We were going to attempt a hike, but realized the one Steve had planned, we had already done!  Plus it was pretty crowded and it would have been quite the hike from the car to the trail.  So we ended up finding a nearby park to relax at instead.  Once it got closer to "check in time", we headed towards the cabin that Jennifer found for us to stay at for the rest of the weekend.  We tried GPSing to the cabin, but soon found ourselves on a one-way loop on a hill in the middle of nowhere.  (Again, thank God for cell phones, internet, & data plans!)  Steve was able to pull up the original map sent by the owner and discovered we were a little off.  We had to "old school" map it - meaning no GPS, but just looking at the map on our phone! 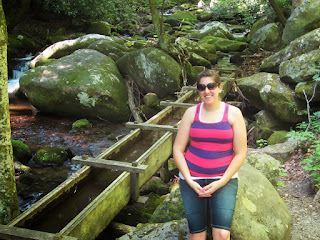 (That tank top is deceiving and hiding quite the large baby bump.  You'll have to wait for another pregnancy update to see how big that bump is now!) 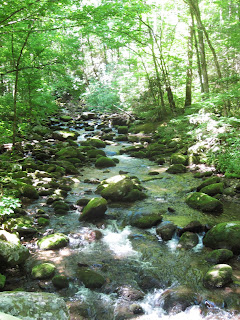 Once we got to the cabin, the combination for the door wouldn't work.  Luckily, the guy who mows the lawn just happened to show up and remembered there was a little trick to opening the door -- thanks lawn mower!  After relaxing a little bit, we got ready and headed out to meet up with Jake & Jennifer at one of our favorite places near Gatlinburg - Apple Barn Cider Mill -- yummy!!

Sunday was our only full day with our friends.  Sadly, Sunday was also marked with the worst weather -- rain nearly all day.  We didn't let that stop us, though!  After purchasing rain gear at a Family Dollar, we headed into downtown Gatlinburg for the afternoon.  We first stopped to eat at the Smokey Mountain Brewery.  Once we decided the rain was as light as it was going to get, we donned our rain gear (Jake & Jennifer donned their baby carriers & loaded up the babies) and we went along our way to browse the shops.  We stopped at a couple candy stores -- fudge was purchased at one -- and wood & clock shops.  After the candy was purchased, we decided we were done with the rain and headed back to the cabin.

The afternoon and evening were spent just hanging out, catching up, and lots of baby snuggling!  Jake & Jennifer joked that our time together was a baby boot camp for Steve & I.  We thoroughly enjoyed it!  It just made us both more excited for snuggles and caring for our own little Babycakes.  Their little boot camp was so enjoyable because they have 2 great kids!  Kate has quite the personality and can be dramatic at times, but you always know what she's wanting out of her antics.  Sweet little Henry was just completely chill and just went with the flow.  They have their hands full with these two cuties, but what a blessing they are! 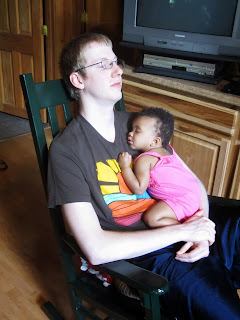 (Steve learning how easy it is to rock a baby to sleep.  I think he rocked himself to sleep in the process.) 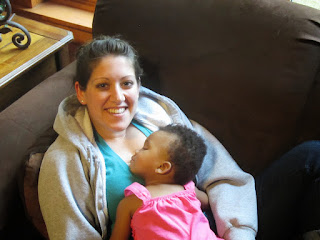 (Steve had his fill with Kate snuggles, so I stole her from him while she was still sleeping.) 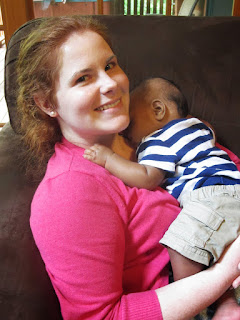 (While Steve and I split cuddles with Kate, Henry got to nap in peace with his momma!  Kate is pretty demanding of her mom's time so I'm sure Henry appreciated the one on one without having to fight Kate off!) 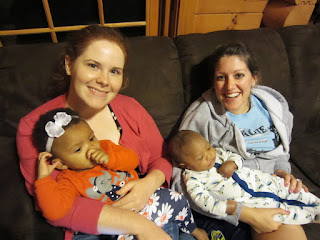 (After nearly 2 years of close friendship, we finally have a picture to prove it!  As I went through the photos and posted them, I realized there are no pictures with Jake in them!  I guess that means we will have to get together again soon so that Jake and Steve can have their first photo together as well as a photo of all three babies together!  It's so crazy to think of how big their family has grown and how we are soon too follow! Absolutely love these people!)

Jake and Jennifer had to leave early Monday morning (by early, I mean by 4am!) to catch their flight back home.  Steve and I left around 8:30 to start our long trek home.  Okay, I guess our trek wasn't that long, only a 7 hour drive home.  However, once we got home, I turned around and headed to IN for the night!  Timing wasn't the best, but I went on a field trip with my favorite teacher Mrs. B to Chicago on Tuesday.  It's the same field trip I've been on with her in the past.  This was the last Chicago trip and I just knew I had to go on it with her.  I had a blast and our Knight even won at the Medieval Times dinner show.   I returned home to OH on Wednesday.  Being home never felt so good!  Although, no lounging and recuperating for this girl -- I have a pretty tight schedule from now until cruise time.  Lots to get done! 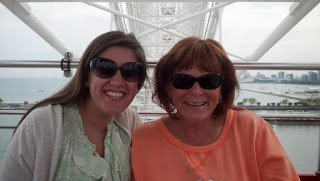 (Obligatory Ferris Wheel ride on Navy Pier.  This was after the art museum and 1.5 mile walk to the pier, but before the ice cream and Medieval Times dinner show.)
Posted by Unknown at 9:23 PM