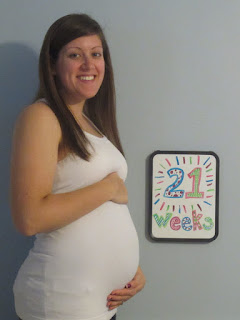 We have passed the halfway mark!  This picture is from earlier this week.  This weekend actually marks the entrance into week 22.

I must say, I'm starting to really feel pregnant!  I was super lucky to not have to deal with crazy morning sickness or vomitting.  But now things are becoming more realistic.  I get winded and tired more easily and have to take breaks when running around doing stuff.  My back aches by the end of the day (and recently the feet, but I've been up on them more in the past few days!).

But the reason I really feel pregnant now is that Babycakes (so named by little Gabbie) has become very active! She is constantly reminding me of her presence and usually picking in opportune times to make herself known.  Like deciding to kick and punch just after I've eaten and have a full tummy, or doing what I believe are somersaults when I lay down.  I really enjoy knowing that she's in there, just wish her timing worked better with my comfort ;-).

Several people have asked me, "What does it feel like?".  In the beginning, it just felt like little spasms.  Online, the first fetal movement is usually described as "gas bubbles".  To me, it felt like a muscle spasming - you know when your calf muscle starts twitching and there's nothing you can do to stop it.  Now, her movements have developed more into what I relate to as that feeling you get in your stomach right before a big drop on a roller coaster.  Ha ha - I think that's when she's somersaulting.  It's like your stomach is rolling (think like feeling nauseous, only the location of the feeling is below your stomach).  Steve is now able to feel her kicks and punches, and they can even be seen now.

We still are trying to decide on what to do with the nursery.  I think we have it narrowed down to a few options; but honestly, that could change - haha!  But since we have a few more weeks of traveling and other things planned, I'll worry about the nursery at the end of the month.

Now that we've reached the halfway point, it's becoming more real.  Recently, we've both had little freak outs over realizing what is going to happen come October.  Sure we knew we were ready to have a baby, but I don't feel like you really grasp that concept until you're well down that path.  But there's no turning back!  Part of me wants the next 20 weeks to fly by as quickly as the first 20 did; but then the other part of me takes over and says SLOW IT DOWN!  I HAVE MORE TO GET DONE!!
Posted by Unknown at 8:41 PM